Mikhail Vasilyevich Lomonosov (/ˌlɒməˈnoːsoːf, -sɒf/; Russian: Mihaíl Vasíl'evich Lomonósov; [mʲɪxaˈil vaˈsʲilʲjɪvʲɪtɕ ləmaˈnosəf]; November 19 [O.S. November 8] 1711 – April 15 [O.S. April 4] 1765) was a Russian polymath, scientist and writer, who made important contributions to literature, education, and science. Among his discoveries was the atmosphere of Venus and the Law of Mass Conservation in chemical reactions. His spheres of science were natural science, chemistry, physics, mineralogy, history, art, philology, optical devices and others. Lomonosov was also a poet and influenced the formation of the modern Russian literary language. 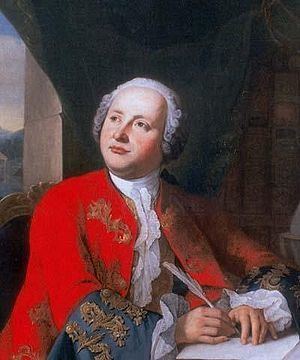 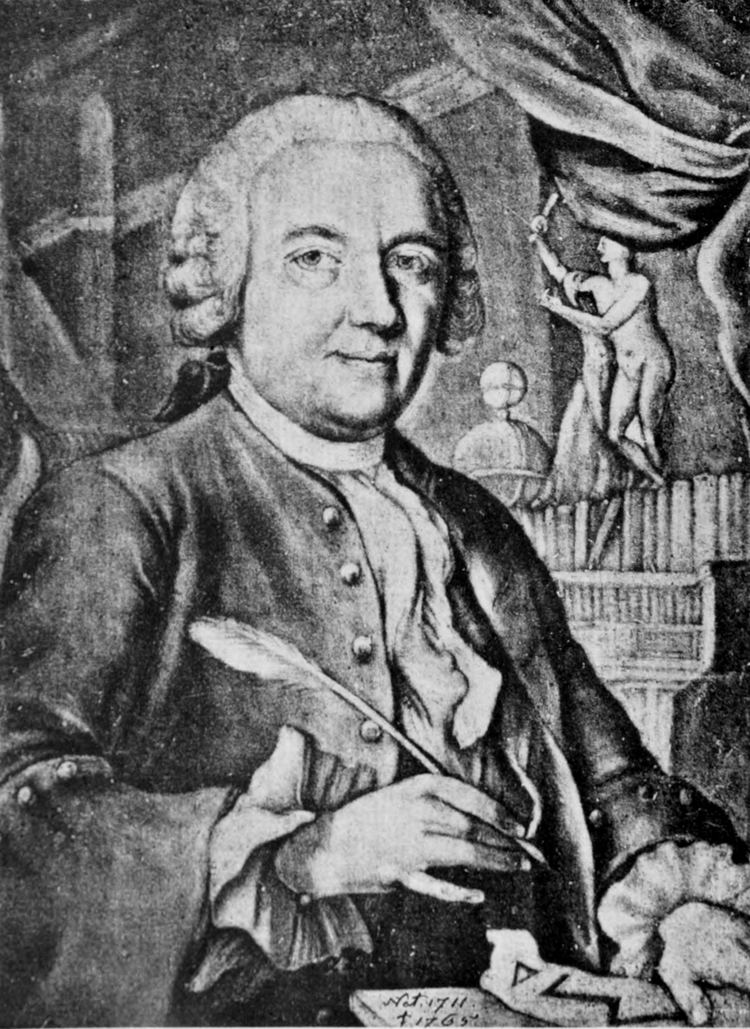 Lomonosov was born in the village of Denisovka (later renamed Lomonosovo in his honor) in Archangelgorod Governorate, on an island not far from Kholmogory, in the far north of Russia. His father, Vasily Dorofeyevich Lomonosov, was a prosperous peasant fisherman turned ship owner, who amassed a small fortune transporting goods from Arkhangelsk to Pustozyorsk, Solovki, Kola, and Lapland. Lomonosov's mother was Vasily's first wife, a deacon's daughter, Elena Ivanovna Sivkova. 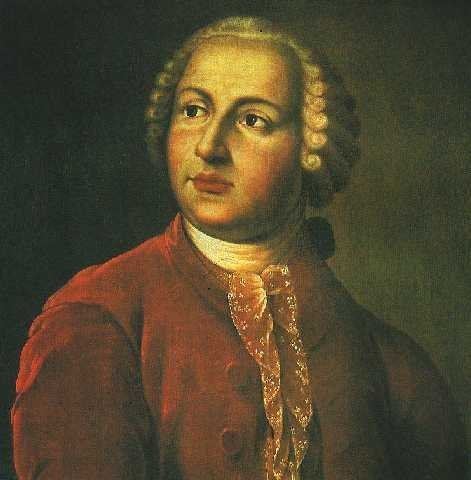 He remained at Denisovka until he was ten, when his father decided that he was old enough to participate in his business ventures, and Lomonosov began accompanying Vasily on trading missions.

Learning was young Lomonosov's passion, however, not business. The boy's thirst for knowledge was insatiable. Lomonosov had been taught to read as a boy by his neighbor Ivan Shubny, and he spent every spare moment with his books. He continued his studies with the village deacon, S.N. Sabelnikov, but for many years the only books he had access to were religious texts. When he was fourteen, Lomonosov was given copies of Meletius Smotrytsky's Modern Church Slavonic (a grammar book) and Leonty Magnitsky's Arithmetic. On his religious views, Lomonosov was a deist.

In 1724, his father married for the third and final time. Lomonosov and his stepmother Irina had an acrimonious relationship. Unhappy at home and intent on obtaining a higher education, which Lomonosov could not receive in Denisovka, he was determined to leave the village.

Education in Moscow and Kiev

In 1730, at nineteen, Lomonosov went to Moscow on foot, because he was determined to study. Not long after arriving, Lomonosov obtained admission into the Slavic Greek Latin Academy by falsely claiming to be a priest's son. That initial falsehood would nearly get him expelled from the academy a few years later when discovered.

Lomonosov lived on three kopecks a day, living off only black bread and kvass, but he made rapid progress scholastically. After three years in Moscow he was sent to Kiev to study for one year at the Kyiv-Mohyla Academy. He quickly became dissatisfied with the education he was receiving there, and returned to Moscow several months ahead of schedule, resuming his studies there. He completed a twelve-year study course in only five years, graduating at the top of his class. In 1736, Lomonosov was awarded a scholarship to Saint Petersburg State University. He plunged into his studies and was rewarded with a two-year grant to study abroad at the University of Marburg, in Germany.

The University of Marburg was among Europe's most important universities in the mid-18th century due to the presence of the philosopher Christian Wolff, a prominent figure of the German Enlightenment. Lomonosov became one of Wolff's personal students while at Marburg. Both philosophically and as a science administrator, this connection would be the most influential of Lomonosov's life. Between 1739–1740 he studied mineralogy, metallurgy, and mining at Bergrat Henckel's laboratories in Freiberg, Saxony; there he intensified his studies of German literature.

Lomonosov quickly mastered the German language, and in addition to philosophy, seriously studied chemistry, discovered the works of 17th century English theologian and natural philosopher, Robert Boyle, and even began writing poetry. He also developed an interest in German literature. He is said to have especially admired Gunther. His Ode on the Taking of Khotin from the Turks, composed in 1739, attracted a great deal of attention in Saint Petersburg.

During his residence in Marburg, Lomonosov boarded with Catharina Zilch, a brewer's widow. He fell in love with Catharina’s daughter Elizabeth Christine Zilch. They were married in June 1740. Lomonosov found it extremely difficult to maintain his growing family on the scanty and irregular allowance granted him by the Russian Academy of Science. As his circumstances became desperate, he resolved to return to Saint Petersburg.

Lomonosov returned to Russia in 1741. A year later he was named adjutant to the Russian Academy of Science in the physics department. In May 1743, Lomonosov was accused, arrested, and held under house arrest for eight months, after he supposedly insulted various people associated with the Academy. He was released and pardoned in January 1744 after apologising to all involved.

Lomonosov was made a full member of the Academy, and named professor of chemistry, in 1745. He established the Academy's first chemistry laboratory. Eager to improve Russia’s educational system, in 1755, Lomonosov joined his patron Count Ivan Shuvalov in founding the Moscow State University.

In 1761, he was elected a foreign member of the Royal Swedish Academy of Sciences. In 1764, Lomonosov was appointed to the position of secretary of state. He died one year later in Saint Petersburg. Most of his accomplishments were unknown outside Russia until long after his death.

In 1756, Lomonosov tried to replicate Robert Boyle's experiment of 1673. He concluded that the commonly accepted phlogiston theory was false. Anticipating the discoveries of Antoine Lavoisier, he wrote in his diary: "Today I made an experiment in hermetic glass vessels in order to determine whether the mass of metals increases from the action of pure heat. The experiments– of which I append the record in 13 pages– demonstrated that the famous Robert Boyle was deluded, for without access of air from outside the mass of the burnt metal remains the same".

He stated that all matter is composed of corpuscles – molecules that are "collections" of elements – atoms. In his dissertation "Elements of Mathematical Chemistry" (1741, unfinished), the scientist gives the following definition: "An element is a part of a body that does not consist of any other smaller and different bodies ... corpuscle is a collection of elements forming one small mass." In a later study (1748), he uses term "atom" instead of "element", and "particula" (particle) or "molecule" instead of "corpuscle".

He regarded heat as a form of motion, suggested the wave theory of light, contributed to the formulation of the kinetic theory of gases, and stated the idea of conservation of matter in the following words: "All changes in nature are such that inasmuch is taken from one object insomuch is added to another. So, if the amount of matter decreases in one place, it increases elsewhere. This universal law of nature embraces laws of motion as well, for an object moving others by its own force in fact imparts to another object the force it loses" (first articulated in a letter to Leonhard Euler dated 5 July 1748, rephrased and published in Lomonosov's dissertation "Reflexion on the solidity and fluidity of bodies", 1760).

Lomonosov was the first person to hypothesize the existence of an atmosphere on Venus based on his observation of the transit of Venus of 1761 in a small observatory near his house in Petersburg.

In June 2012 a group of astronomers carried out experimental reconstruction of Lomonosov's discovery of Venusian atmosphere with antique refractors during the transit of Venus ( 5–6 June 2012). They concluded that Lomonosov's telescope was fully adequate to the task of detecting the arc of light around Venus off the Sun's disc during ingress or egress if proper experimental techniques as described by Lomonosov in his 1761 paper are employed.

In 1762, Lomonosov presented an improved design of a reflecting telescope to the Russian Academy of Sciences forum. His telescope had its primary mirror adjusted at an angle of four degrees to the telescope's axis. This made the image focus at the side of the telescope tube, where the observer could view the image with an eyepiece without blocking the image. However, this invention was not published until 1827, so this type of telescope has become associated with a similar design by William Herschel, the Herschelian telescope.

Lomonosov was the first person to record the freezing of mercury. Believing that nature is subject to regular and continuous evolution, he demonstrated the organic origin of soil, peat, coal, petroleum and amber. In 1745, he published a catalogue of over 3,000 minerals, and in 1760, he explained the formation of icebergs.

In 1763 he published On The Strata of the Earth - his most significant geological work.

Lomonosov's observation of iceberg formation led into his pioneering work in geography. Lomonosov got close to the theory of continental drift, theoretically predicted the existence of Antarctica (he argued that icebergs of the South Ocean could be formed only on a dry land covered with ice), and invented sea tools which made writing and calculating directions and distances easier. In 1764, he organized an expedition (led by Admiral Vasili Chichagov) to find the Northeast Passage between the Atlantic and Pacific oceans by sailing along the northern coast of Siberia.

Lomonosov was proud to restore the ancient art of mosaics. In 1754, in his letter to Leonhard Euler, he wrote that his three years of experiments on the effects of chemistry of minerals on their colour led to his deep involvement in the mosaic art. In 1763, he set up a glass factory that produced the first stained glass mosaics outside of Italy. There were forty mosaics attributed to Lomonosov, with only twenty-four surviving to the present day. Among the best is the portrait of Peter the Great and the Battle of Poltava, measuring 4.8 × 6.4 meters.

In 1755 Lomonosov wrote a grammar that reformed the Russian literary language by combining Old Church Slavonic with the vernacular tongue. To further his literary theories, he wrote more than 20 solemn ceremonial odes, notably the Evening Meditation on the God's Grandeur. He applied an idiosyncratic theory to his later poems – tender subjects needed words containing the front vowel sounds E, I, Y and U, whereas things that may cause fear (like "anger", "envy", "pain" and "sorrow") needed words with back vowel sounds O, U and Y. That was a version of what is now called sound symbolism.

In 1760 Lomonosov published a History of Russia (the first ever?). In addition, he attempted to write a grand epic about Peter the Great, to be based on the Aeneid by Vergil, but he died before he could finish it.

The Lomonosov Gold Medal was established in 1959 and is awarded annually by the Russian Academy of Sciences to a Russian and a foreign scientist.

The street "Lomonosova iela" in the Maskavas Forstate district of Riga is named in honor of Lomonosov. During the Soviet era a main street in Tallinn, Estonia, was named in his honor as "Lomonossovi M." but from 1991 it was renamed Gonsiori after Jakob Johann Gonsior a 19th Century alderman and lawyer.