Corsica ( French: Corsican and Italian: Corsica) is an island in the Mediterranean Sea belonging to France. It is located west of the Italian Peninsula, southeast of the French mainland, and north of the Italian island of Sardinia. Mountains make up two-thirds of the island, forming a single chain.

Corsica is one of the 27 régions of France, although it is designated as a territorial collectivity (collectivité territoriale) by law. As a territorial collectivity, Corsica enjoys some greater powers than other French régions but is referred to as a région in common speech and is almost always listed among them. Although the island is separated from the continental mainland by the Ligurian Sea and is closer to the Italian mainland than to the French mainland, politically Corsica is part of Metropolitan France.

After being ruled by the Republic of Genoa since 1284, Corsica was briefly an independent Corsican Republic from 1755 until its conquest by France in 1769. Due to Corsicas historical ties with the Italian peninsula, the island retains to this day many elements of Italian culture. The native Corsican language, whose northern variant is closely related with Tuscan, is recognised as a regional language by the French government.

The French emperor Napoléon Bonaparte was born in 1769 in the Corsican capital of Ajaccio. His ancestral home, Casa Buonaparte, is today used as a museum.

The origin of the name Corsica is subject to much debate and remains a mystery. To the Ancient Greeks it was known as Kalliste, Corsis, Cyrnos, Cernealis, or Cirné. The latter Greek names are based on the Phoenician word for peninsula (kir).

Corsica has been occupied continuously since the Mesolithic era. It acquired an indigenous population that was influential in the Mediterranean during its long prehistory.

After a brief occupation by the Carthaginians, colonization by the ancient Greeks, and an only slightly longer occupation by the Etruscans, it was incorporated by the Roman Republic at the end of the First Punic War and, with Sardinia, in 260 BC became a province of the Roman Republic. The Romans, who built a colony in Aléria, considered Corsica as one of the most backward regions of the Roman world. The island produced sheep, honey, resin and wax, and exported many slaves, not well considered because of their fierce and rebellious character. Moreover, it was known for its cheap wines, exported to Rome, and was used as place of relegation, one of the most famous exiles being the Roman philosopher Seneca. Administratively, the island was divided in pagi, which in the Middle Ages became the pievi, the basic administrative units of the island until 1768. During the diffusion of Christianity, arrived quite early from Rome and the Tuscan harbors, Corsica was home to many martyrs and saints: among them, the most important are Saint Devota and Saint Julia, both patrons of the island. Corsica was integrated by Emperor Diocletian (r. 284-305) in Roman Italy. 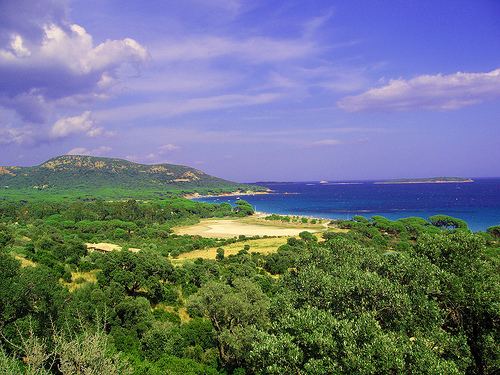 Corsica was formed approximately 250 million years ago with the uplift of a granite backbone on the western side. About 50 million years ago sedimentary rock was pressed against this granite, forming the schists of the eastern side. It is the most mountainous island in the Mediterranean, a "mountain in the sea".

It is also the fourth largest island in the Mediterranean, after Sicily, Sardinia and Cyprus.

The island is 90 kilometres (56 mi) from Tuscany in Italy and 170 kilometres (110 mi) from the Côte dAzur in France. It is separated from Sardinia to the south by the Strait of Bonifacio, a minimum of 11 kilometres (6.8 mi) wide.

Corsica is one of the few French regions in which its own minority language has a better prospect of survival compared to the others: in fact, alongside French (Français), the most widely spoken language is Corsican (Corsu), which is closely related to medieval Tuscan (Toscano). However, since the annexation of the island by France in the 18th century, Corsican has been under heavy pressure from French, and today it is estimated that only 10% of Corsicas population speak the language natively, with only 50% having some sort of proficiency in it.

The language is divided into two main varieties: Cismuntanu and Ultramuntanu, spoken respectively northeast and southwest of the Girolata - Porto Vecchio line. This division was due to the massive immigration from Tuscany which took place in Corsica during the lower Middle Ages: due to that, the Cismuntanu became very similar to the Tuscan dialects, making part of the Italo-Dalmatian language group, while the Ultramuntanu could keep its original characteristics which make of it a Southern Romance language belonging to the Sardinian (Sardu) family. Therefore, due to the differences between the main dialectal varieties, many linguists classify Corsican as an Italo-Dalmatian language, while others consider it a Southern Romance one.

It should also be noted that fewer and fewer people speak a Ligurian dialect, known as bunifazzinu, in what has long been a language island, Bonifacio. In Cargèse, a village established by Greek immigrants in the 17th century, Greek (????????) was the traditional language: whereas it has long disappeared from spoken conversation, ancient Greek is still the liturgical language and the village has many Greek Orthodox parishes.

Corsica is the least economically developed region in Metropolitan France. Tourism plays a big part in the Corsican economy. The islands climate, mountains, and coastlines make it popular among tourists. The island has not had the same level of intensive development as other parts of the Mediterranean and is thus mainly unspoiled. Tourism is particularly concentrated in the area around Porto-Vecchio and Bonifacio in the south of the island and Calvi in the northwest.

From the mountains to the plains and sea, many ingredients play a role. Game such as wild boar (Cingale, Singhjari) is popular. There also is seafood and river fish such as trout. Delicacies such as figatellu (also named as ficateddu), made with liver, coppa, ham (prizuttu), lonzu are made from Corsican pork (porcu nustrale). Characteristic among the cheeses is brocciu (similar to ricotta), which-when fresh-is used as ingredient in many dishes, from first courses (sturzapreti) to cakes (fiadone). Other cheeses, like casgiu merzu, casgiu veghju are made from goat or sheep milk. Chestnuts are the main ingredient in the making of pulenta castagnina and cakes (falculelle). A variety of alcohol also exists ranging from aquavita (brandy), red and white Corsican wines (Vinu Corsu), muscat wine (plain or sparkling), and the famous "Cap Corse" apéritif produced by Mattei. The herbs which are part of Maquis (Corsican: ) and the chestnuts and oak nuts of the Corsican forests are eaten by local animals, resulting in the noticeable taste in the food there.

The cuisine of Corsica is the traditional cuisine of the French island of Corsica. It is mainly based on the products of the island, and due to historical and geographical reasons has much in common with the Italian cuisine, and marginally with those of Nice and of Provence.

The geographic conformation of Corsica, with its eastern coast (the one nearest to the continent) low, malaria-ridden and impossible to defend, forced the population to settle in the mountains of the interior. The agricultural products exported during Antiquity reflect this situation: these were sheep, plus honey, wax and tar, produced by the widespread forests. Moreover, the island was famous for its cheap wines, exported to Rome. The concentration of settlement in the interior, typical also of the nearby Sardinia, lasted until the beginning of the 20th century: in 1911, 73,000 inhabitants lived in the zone comprised between 700 and 1,000 m above sea level. In the Middle Ages, and more precisely during the 12th century, when Pisa was Corsicas hegemonic power, the large immigration from nearby Tuscany brought to the island, together with the Tuscan language, customs and dishes typical of that Italian region. Later, when it was the turn of Genoa to dominate the island, a major shift in peoples eating habits took place: the Genoese governor, with a decree signed on 28 August 1548, ordered that each landowner and tenant had to plant at least a chestnut, a mulberry, an olive and a fig tree each year, under the fine of three lire for each tree not planted. Other decrees on the same line, such as that issued in 1619, which ordered that ten chestnut trees had to be planted every year by each landowner and tenant, with time changed radically the landscape of whole regions of the island, with the almost total substitution of cereals with chestnuts: one region, the Castagniccia, south of Bastia, got its name from its chestnut (castagnu) forests. In the 18th century the chestnut had almost completely replaced cereals. Above all chestnut plantations radically changed the diet of the islanders, preserving them from the recurrent famines.