Who Are Kurt Russell's Children And Goldie Hawn's Children ? [1 Daughter And 3 Sons]

Kurt Vogel Russell (born March 17, 1951) is an American actor. His first roles were as a child in television series, including a lead role in the Western series The Travels of Jaimie McPheeters (1963–64). In the late 1960s, he signed a ten-year contract with The Walt Disney Company, where, according to Robert Osborne, he became the studio's top star of the 1970s.

In 1984, for his performance in Silkwood (1983), Russell was nominated for a Golden Globe Award for Best Performance by an Actor in a Supporting Role in a Motion Picture. During the 1980s, he was cast in several films by director John Carpenter, including anti-hero roles such as army hero-turned-robber Snake Plissken in the futuristic action film Escape from New York and its 1996 sequel Escape from L.A., Antarctic helicopter pilot R.J. MacReady in the horror film The Thing (1982), and truck driver Jack Burton in the dark kung-fu comedy action film Big Trouble in Little China (1986), all of which have since become cult films. He was nominated for an Emmy Award for the television film Elvis (1979), also directed by Carpenter. 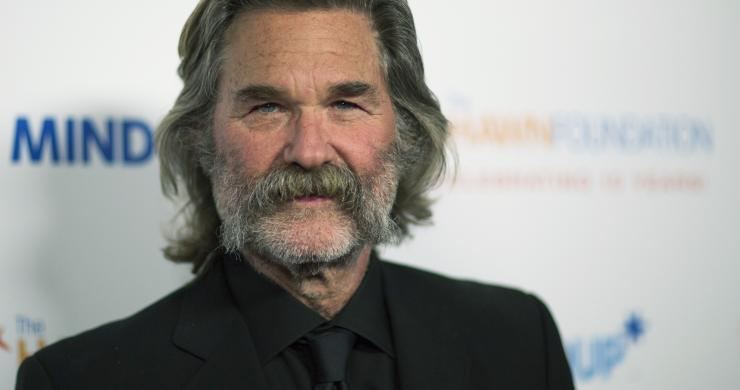 In 1993, he starred as Wyatt Earp in the western film Tombstone, and in 1994, Russell had a starring role in the military science fiction film Stargate. In the mid-2000s, his portrayal of U.S. Olympic hockey coach Herb Brooks in Miracle (2004) won the praise of critics. In 2006, he appeared in the disaster-thriller Poseidon, and in 2007, in Quentin Tarantino's Death Proof segment from the film Grindhouse. 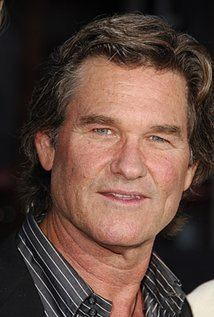 Born in Springfield, Massachusetts, Russell is the son of actor Bing Russell (born Neil Oliver Russell; 1926–2003) and dancer Louise Julia (Crone) Russell. He has three sisters, Jill, Jamie and Jody. In 1969, he graduated from Thousand Oaks High School in southern California. His sister Jill is the mother of baseball player Matt Franco. 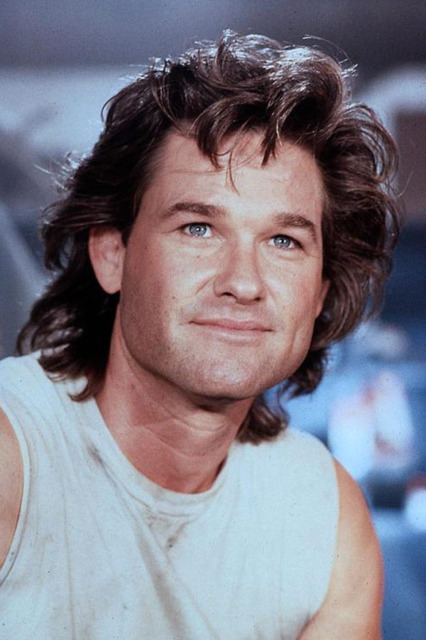 Russell's film career began at the age of eleven in an uncredited part in Elvis Presley's It Happened at the World's Fair, and two extra episodes, celebrating the tenth anniversary of the then defunct series Rin Tin Tin. On April 24, 1963, Russell guest starred in the ABC series Our Man Higgins, starring Stanley Holloway as an English butler in an American family. He played Peter Hall in the 1963 episode "Everybody Knows You Left Me" on the NBC medical drama about psychiatry The Eleventh Hour.

Later in 1963, he landed the lead role as Jaimie in the ABC Western series The Travels of Jaimie McPheeters (1963–64). Based on a book by Robert Lewis Taylor, the series starred Dan O'Herlihy, John Maloney and the young Osmond Brothers. Charles Bronson became a semi-regular in the series. In 1964, he guest-starred in "Nemesis", an episode of the popular ABC series The Fugitive in which, as the son of police Lt. Phillip Gerard, he is unintentionally kidnapped by his father's quarry, Doctor Richard Kimble. That same year he appeared on NBC's The Virginian as a mistaken orphan whose father was an outlaw played by Rory Calhoun who was still alive and recently released from prison looking for his son. Russell played a similar role as a kid named Packy Kerlin in the 1964 episode "Blue Heaven" of the western series Gunsmoke. He also appeared in five episodes of Daniel Boone in various roles.

At age 13, Russell played the role of Jungle Boy on an episode of CBS's Gilligan's Island, which aired on February 6, 1965. He guest-starred on ABC's western The Legend of Jesse James. In 1966, Russell played a 14-year-old Indian boy, Grey Smoke, adopted by the Texas Rangers in the episode "Meanwhile, Back at the Reservation" of the NBC western series Laredo. In the story line, he works for an outlaw gang, but the Rangers take him under their wing and the boy proves helpful when gunslingers try to occupy Laredo, Texas.

In 1966, before Walt Disney died, the final words he ever wrote were “Kurt Russell.” No one knows why. Disney died soon after. Russell was a child actor whom the Disney studio had just signed to a long term contract. In January 1967, Russell co-starred as Private Willie Prentiss in the episode "Willie and the Yank: The Mosby Raiders" in Walt Disney's Wonderful World of Color and the Sherman Brothers theatrical film musical, The One and Only, Genuine, Original Family Band. It was on the set of Family Band where Russell met his future partner Goldie Hawn. Later, he, Jay C. Flippen and Tom Tryon appeared in the episode "Charade of Justice" of the NBC western series The Road West starring Barry Sullivan. In a March 1966 episode of CBS's Lost in Space entitled "The Challenge", he played Quano, the son of a planetary ruler and Edward's son in Follow Me, Boys!.

In 1971, he co-starred as a young robber released from jail, alongside James Stewart in Fools' Parade. Later, he guest-starred in an episode of Room 222 as an idealistic high school student who assumed the costumed identity of Paul Revere to warn of the dangers of pollution. In 1966, Russell had been signed to a ten-year contract with The Walt Disney Company, where he became, according to Robert Osborne, the "studio's top star of the '70s". He then went on to star in The One and Only, Genuine, Original Family Band and The Computer Wore Tennis Shoes, the latter of which spawned two sequels: Now You See Him, Now You Don't in 1972 and The Strongest Man in the World in 1975.

Russell, like his father, had a baseball career. In the early 1970s, Russell was a switch-hitting second baseman for the California Angels minor league affiliates, the Bend Rainbows (1971) and Walla Walla Islanders (1972) in the short season Class A Northwest League, then moved up to Class AA in 1973 with the El Paso Sun Kings of the Texas League. While in the field turning the pivot of a double play early in the season, the incoming runner at second base collided with him and tore the rotator cuff in Russell's right (throwing) shoulder. Before his injury, he was leading the Texas League in hitting, with a .563 batting average. He did not return to El Paso, but was a designated hitter for the independent Portland Mavericks back in the Northwest League late in their short season. The team was owned by his father, and he had been doing promotional work for them in the interim. The injury forced his retirement from baseball in 1973 and led to his return to acting.

In the autumn of 1974, he appeared in the ABC series The New Land, inspired by the 1972 Swedish film of the same name. Critically acclaimed, it suffered very low ratings and only aired six of the 13 episodes; it was up against established Saturday night favorites All in the Family on CBS and Emergency! on NBC. In autumn 1976, Russell appeared with Tim Matheson in the 15-episode NBC series The Quest, the story of two young men in the American West seeking the whereabouts of their sister, a captive of the Cheyenne. In 1979, Russell was nominated for an Emmy Award for Outstanding Lead Actor in a Limited Series or a Special for the made-for-television film Elvis. This was his first pairing with director John Carpenter.

During the 1980s, Russell teamed with Carpenter several times, helping create some of his best-known roles, usually as anti-heroes, including the infamous Snake Plissken of Escape from New York and its sequel, Escape from L.A. Among their collaborations was The Thing (1982), based upon the short story Who Goes There? by John W. Campbell, Jr., which had been interpreted on film before, albeit loosely, in 1951's The Thing from Another World. In 1986, the two made Big Trouble in Little China, a dark kung-fu comedy/action film in which Russell played a truck driver caught in an ancient Chinese war. The film was a financial failure like The Thing, it has since gained a cult audience. After voicing adult Copper in the animated Disney film The Fox and the Hound, Russell is one of the very few famous child stars in Hollywood who has been able to continue his acting career past his teen years. He received award nominations well into middle age, including a Golden Globe Award for Best Performance by an Actor in a Supporting Role in a Motion Picture for his performance with Meryl Streep in Silkwood (1983).

Elvis Presley connections have run like a thread through his career. Aside from appearing as a child in one of Presley's films and giving a convincing portrayal of the singer in the 1979 television biopic, Russell starred as an Elvis impersonator involved in a Las Vegas robbery in 3000 Miles to Graceland. His portrayal of U.S. Olympic hockey coach Herb Brooks in the 2004 film Miracle, won the praise of critics. "In many ways," wrote Claudia Puig of USA Today, "Miracle belongs to Kurt Russell." Roger Ebert of the Chicago Sun Times wrote, "Russell does real acting here." Elvis Mitchell of The New York Times wrote, "Mr. Russell's cagey and remote performance gives Miracle its few breezes of fresh, albeit methane-scented, air."

In 2006, Russell revealed that he was the director of Tombstone, not George P. Cosmatos, as credited. According to Russell, Cosmatos was recommended by Sylvester Stallone and was, in effect, a ghost director, much as he had been for Rambo: First Blood Part II. Russell said he promised Cosmatos he would keep it a secret as long as Cosmatos was alive; Cosmatos died in April 2005. Russell owns the rights to the masters and makes reference to possibly re-editing the film, as he was not originally involved in the editing.

Russell played the villain Stuntman Mike in Quentin Tarantino's segment Death Proof of the film Grindhouse. After a remake of Escape from New York was announced, Russell was reportedly upset with the casting of Scottish actor Gerard Butler for his signature character, Snake Plissken, as he believed the character 'was quintessentially [...] American.'

Russell appeared in The Battered Bastards of Baseball, a documentary about his father and the Portland Mavericks, which debuted at the Sundance Film Festival in 2014. He co-starred in the action thriller Furious 7 (2015).

Russell married actress Season Hubley, whom he met on the set of Elvis in 1979. They had a son, Boston (born 1980). In 1983, in the middle of his divorce from Hubley, Russell re-connected with Goldie Hawn on the set of the film Swing Shift, and they have been in a relationship ever since. They own a home in Palm Desert, California. They have a son, Wyatt (born 1986). In 1987, the couple starred in the film Overboard. Hawn's son and daughter with Bill Hudson, actors Oliver and Kate Hudson, consider Russell to be their father.

Russell is a libertarian. In 1996, he was quoted in the Toronto Sun saying: "I was brought up as a Republican, but when I realized that at the end of the day there wasn't much difference between a Democrat and Republican, I became a libertarian." In February 2003, Russell and Hawn moved to Vancouver, British Columbia, so that their son could play hockey. Russell is an FAA licensed private pilot holding single/multi-engine and instrument ratings and is an Honorary Board Member of the humanitarian aviation organization Wings of Hope.