Kajal Aggarwal (born 19 June 1985) is an Indian film actress and model. Primarily known for her work in Telugu and Tamil films, Kajal has also appeared in bollywood films. Through her successful career, Kajal has become one of the most popular celebrities in South India. In addition to acting, Kajal participates in stage shows and is a prominent celebrity endorser for brands and products.

Kajal made her acting debut with the 2004 Bollywood film Kyun...! Ho Gaya Na and had her first Telugu film release in 2007 Lakshmi Kalyanam. In the same year, she starred in the box office hit Chandamama, which earned her critical acclaim. She subsequently earned wide critical recognition for her dual portrayal in 2009 historical fiction Telugu film Magadheera. It ranks among the highest-grossing Telugu films of all time and fetched her Best Actress nominations at several award ceremonies including Filmfare. She followed with a series of box-office hits in Telugu and established herself as one of the leading and highest-paid actresses in Tollywood.

Kajal achieved further success by featuring as the female lead in the high-profile Tamil projects Maattrraan (2012), Thuppakki (2012), Jilla (2014) and emerged as a leading actress in Tamil cinema as well. She made a comeback to Bollywood with Singham (2011) which was a blockbuster while her Special 26 (2013) was also declared a box-office success. 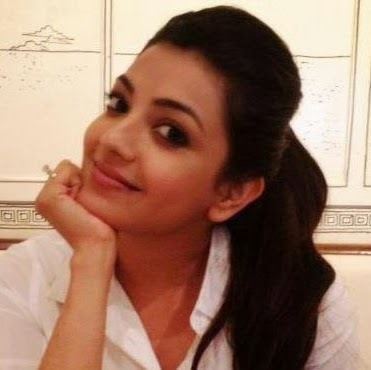 Kajal was born in Mumbai to Vinay Aggarwal, an entrepreneur, and Suman Aggarwal, a confectioner. She has a younger sister, Nisha Agarwal, who is also an actress appearing in Telugu and Tamil films. She studied at St. Anne's High School, Colaba, Mumbai and Jai Hind College, Mumbai. She graduated from K.C. College, Mumbai with a degree in Mass Media specialising in advertising and marketing. In her final year of college, she did internship with Loreal and has started her modelling career. She was planning on pursuing MBA in Brand Management before deciding to pursue acting.

Kajal made her acting debut in the 2004 Bollywood film Kyun...! Ho Gaya Na, in which she had a minor supporting role as the friend of Diya. She signed veteran Tamil director Bharathiraja's Bommalattam, alongside Arjun Sarja. The film got delayed and released in late 2008.

She made her debut in the Telugu film industry and played her first leading role in 2007 in Teja's Lakshmi Kalyanam alongside Kalyan Ram; it did not fare well at the box office. Later that year, she appeared in the Krishna Vamsi-directed Chandamama, which opened to positive reviews and became her first major successful film. In 2008, she had her first Tamil film release, Perarasu's action entertainer Pazhani, co-starring Bharath. She had two more Tamil releases that year with Venkat Prabhu’s comedy-thriller Saroja, in which she did a guest appearance, and Bharathiraja's investigative thriller Bommalattam. Although the former went on to become a commercial as well as a critical success, both films failed to boost her career as her roles were too insignificant. Her Telugu releases, Pourudu and Aatadista opposite Sumanth and Nitin, respectively, did not receive positive reviews; both were successful at the box office.

Kajal had four releases in 2009. She first starred in the Tamil film Modhi Vilayadu, opposite Vinay Rai which garnered mixed reviews and was a financial failure. Then she appeared in the high budget Telugu historical drama Magadheera, alongside Ram Charan Teja, which saw her playing double roles for the first time. The film, directed by S. S. Rajamouli, received universal critical acclaim, while Kajal, particularly, was praised for her portrayal of a princess. Kajal was nominated for the Filmfare Award for Best Actress in Telugu and nominated for the award for Best Telugu Actress in the South Scope Awards for her performance. It was highly commercially successful and broke several records, emerging as the highest-grossing Telugu film of all time. Magadheera's enormous success turned Kajal into one of the most sought-after actresses in Telugu cinema and catapulted her into the main foray of leading Telugu actresses. It was released again in Tamil as Maaveeran in 2011 and was also successful at the box office. Her subsequent releases Ganesh Just Ganesh, opposite Ram and Arya 2 opposite Allu Arjun received mixed reviews from critics, while her performance garnered positive feedback.

Kajal's first 2010 release was A. Karunakaran's romantic comedy Darling, which featured her alongside Prabhas and received favorable response, becoming a commercial success at the box office, with Kajal receiving her second Filmfare nomination for Best Actress.

Later that year, she appeared in the Tamil thriller film Naan Mahaan Alla opposite Karthi, which was based on a real-life incident and opened to unanimously positive reviews. It was a box office success. The chemistry between Karthi and Kajal was widely praised. It was later dubbed in Telugu as Naa Peru Siva, in Andhra Pradesh and became a success there, too. Kajal's final release in 2010 was another romantic comedy Brindavanam opposite Jr. NTR and Samantha, which received critical acclaim and went on to become an economic success, while fetching Kajal the CineMAA Award for Best Actress.

In 2011, she was paired with Prabhas for the second time in the romantic comedy Mr. Perfect, directed by Dasaradh. The film became a critical and commercial success. Kajal's performance as a conservative doctor and her chemistry with Prabhas won praise by critics. Kajal received her third Filmfare nomination for Best Actress in Telugu for her performance. In May, she appeared in Veera opposite Ravi Teja that received negative reviews and failed at the box office.

In July that year, Kajal made her Bollywood comeback after seven years with a leading role in the police story Singham, a remake of the same-titled 2010 Tamil film, opposite Ajay Devgn. It received mixed reviews from critics, as did her portrayal of a Goan girl Kavya Bhosle, with critics stating that Kajal had not much to offer in the hero-centric film. Komal Nahta noted that "Kaajal Aggarwal acts with effortless ease. Her performance is good", while Filmfare wrote that "Kajal who looks pretty and has done what she has been told to, but probably deserved a meatier debut". Nevertheless, the film was blockbuster at the box office. She was nominated for two awards for her performance: the Filmfare Award for Best Female Debut and the Zee Cine Award for Best Female Debut.

Kajal finished 2011 with the Telugu film Dhada opposite Naga Chaitanya, which failed at the box office.

In early 2012, Kajal appeared in the Telugu gangster film Businessman alongside Mahesh Babu, directed by Puri Jagannadh. A Sankranthi release, it opened to positive reviews and turned out to be a blockbuster. Kajal's performance, though limited, was praised by critics.

Kajal made a comeback to Tamil cinema later that year with two high-profile action flicks. The first was Maattrraan directed by K. V. Anand and starring Suriya. The film received mixed to positive reviews from critics. Her performance was well received; a review carried by The Indian Express summarised "Kajal does with utmost sincerity as the foreign language translator Anjali. It's this trait and her graceful demeanour which makes Kajal a pleasant watch". The second was A. R. Murugadoss's Thuppakki, starring Vijay, in which she played the role of a boxer. It received mostly positive reviews from the critics and was a major commercial success, becoming the second Tamil film ever to collect over ₹100 crore (US$15 million). Her final release in 2012 was the Telugu romance film Sarocharu, opposite Ravi Teja for the second time. Although her performance was praised by critics, the film received poor reviews and did below-average business at the box office.

In early 2013, she starred in V. V. Vinayak's action film Naayak opposite Ram Charan Teja and Amala Paul. Upon release, it received positive reviews and was a major commercial success. She later starred in the Hindi film Special 26, a heist drama directed by Neeraj Pandey. It went on to be a major critical and commercial success. She later appeared in Srinu Vaitla's Baadshah opposite Jr. NTR for the second time in her career. Upon release critics appreciated her performance. The Times of India commented "Kajal is as usual an eye-candy. She's got a good role and has done justice to her performance. Also she looks stunning in the songs." The film was a financial success, cementing her position in Telugu cinema. Her final release in 2013 was All in All Azhagu Raja opposite Karthi which released on Diwali to negative reviews from critics.

In early 2014, she starred in R. T. Neason's masala film Jilla, in which she played a police officer. She then featured in a cameo appearance in the Telugu action thriller film Yevadu. Her next release was Krishna Vamsi's family drama Govindudu Andarivadele which released in October to positive reviews. It grossed ₹416.5 million (US$6.2 million) at the box office and became one of the highest grossing Telugu films of 2014.

In early August 2015 she signed another Telugu film Sardaar Gabbar Singh starring opposite Pawan Kalyan. Later she made a cameo appearance in the film Size Zero.

Kajal endorses a large number of popular brands. Before starting her film career, she had acted in commercials as a model. Kajal represents Celebrity Cricket League as a brand ambassadors. She is the brand ambassador for Lux in endorsing the beauty soap. She endorses several retail and jewelry stores in south India — RS Brothers in Hyderabad, Sri Lakshmi Jewellery in Puducherry and AVR in Salem. She has featured in television advertisements along with Karthi endorsing Bru instant coffee. She has endorsed mobile brands like Samsung Mobile and has featured in advertisements for the Secunderabad based The Chennai Shopping Mall. In April 2012, Kajal was announced as the brand ambassador for Panasonic. In 2013, Kajal has been signed by Dabur as the brand ambassador of its flagship hair oil brand DaburAmlaNelli. She also endorses Green Trends, a leading salon brand in India.

The CineMAA Awards are presented annually by the Movie Artists Association Group to honour artistic and technical excellence of professionals in the Telugu Cinema.
Winner