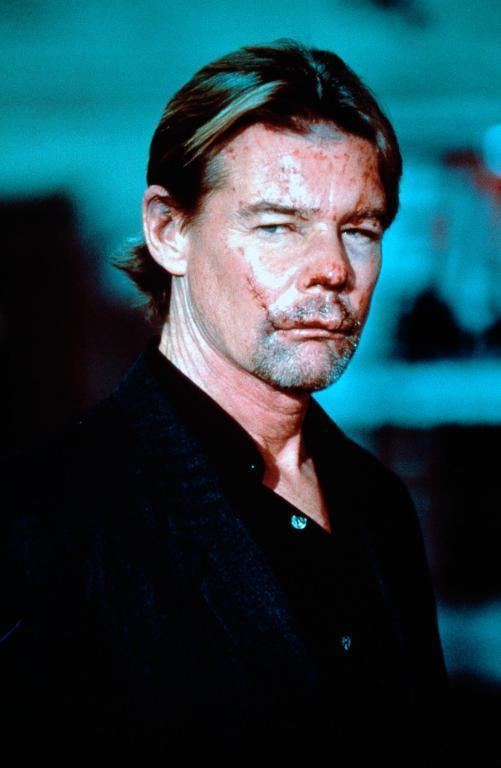 Vincent was born July 15, 1944, in Denver, Colorado, to Doris and Lloyd Vincent. His family moved to Hanford, California, when Jan-Michael was young. Vincent attended Ventura College in Ventura, California.

Vincent was finishing a stint in the California Army National Guard when a talent scout was struck by his looks. His first acting job was in the movie The Bandits (aka Los Banditos), co-directed by and starring Robert Conrad, in 1967.

Vincent’s career took off in the late 1960s when casting agent Dick Clayton signed him to Universal Studios. He made a shirtless appearance on the Dragnet 1968 episode “The Grenade,” as a muscular high school student who suffered an acid attack by a mentally unstable classmate (played by Mickey Sholdar). He also appeared in the Danger Island segments of Hanna-Barbera’s The Banana Splits series as Link (1968–69). Finally, in the fall of 1969 Vincent had a starring role in the prime-time soap opera The Survivors, alongside Lana Turner and George Hamilton; however, the series was canceled at mid-season.

Vincent also performed in several movies in that period, such as the 1969 Twentieth Century Fox movie The Undefeated (as Bubba Wilkes) starring John Wayne, Rock Hudson, and Mexican actor Antonio Aguilar. His name appeared as Michael Vincent in the credits of the movie. Vincent Guest-starred in two episodes of Bonanza (April 1969’s “The Unwanted” as Rick Miller and “The Arrival of Eddie” as Eddie MacKay May 19, 1968, Season 9 credited as Michael Vincent).

Vincent appeared in one episode of Marcus Welby, M.D. as Richie, a teen with an alcohol addiction. He co-starred with Charles Bronson in the 1972 Crime film The Mechanic. In 1970, he garnered critical praise for his role in the made-for-TV film Tribes— also known as “The Soldier Who Declared Peace” in Europe and the UK, co-starring Darren McGavin, about a tough Marine boot-camp drill instructor dealing with a hippie draftee (Vincent), who will not “play by the rules.” Other notable films included the cult surfing film Big Wednesday with William Katt and Gary Busey; he also attracted attention giving a highly complex performance opposite Robert Mitchum in Going Home. In 1971 he appeared in the Gunsmoke episode “The Legend.”

In 1972 Vincent starred in a made-for-TV love story, Sandcastles, and in 1973 he starred in the Disney movie The World's Greatest Athlete, with Tim Conway and John Amos. He also starred in the 1974 romance Buster and Billie as the romantic antihero Buster Lane, where he startled audiences with his full-frontal nudity. In Hooper with Burt Reynolds, Vincent played a young stunt man. In 1975 Bite the Bullet found him sharing screen time opposite Gene Hackman, James Coburn, and Candice Bergen. He also starred in the cult classic trucker movie White Line Fever; in 1976's Baby Blue Marine, a war film directed by John D. Hancock, which also starred Glynnis O’Connor; and in the 1976 cult classic Shadow of the Hawk co-starring Marilyn Hassett. Vincent also appeared in Damnation Alley, based on Roger Zelazny's science fiction novel, in 1977.

In 1980, Vincent starred in the gang-themed drama Defiance, which received a limited release. In that film, he costarred alongside Danny Aiello as Manhattan residents who fight back against the gang members who terrorize their neighborhood. He also appeared in The Return, a science fiction film that was released directly to television and video. In 1981, he co-starred with Kim Basinger in Hard Country. Vincent starred in the 1983 Action film Last Plane Out.

After the completion of his role in the 1983 television Miniseries Winds of War, Vincent was cast as Stringfellow Hawke for the action–espionage series Airwolf, in which he co-starred with Ernest Borgnine and is the role for which he is best known and remembered, as well as for his rate of pay. It was noted, at the time, that Vincent's salary for his work on Airwolf was the highest paid (rumored to be $200,000 per episode) of any actor in American television. While filming Airwolf, Vincent admitted to drug and alcohol problems for which he acknowledged seeking help.

After the end of Airwolf he found roles in smaller budget and lower exposure film projects.

While in the hospital in 1996, Vincent was committed to a role in Red Line with Chad McQueen as Keller. He appeared in the film with a swollen face and scars, and still wearing the hospital ID bracelet.

In 1997, he had a small guest role on Nash Bridges, playing the title character's long-lost brother, and in 1998 he had a cameo in the independent film Buffalo '66.

Vincent has battled alcoholism and intravenous drug use for much of his life. In 1983, he was arrested for drunk driving, but avoided jail by entering rehab. He was also arrested after two bar brawls in 1984 and 1985 and then received a felony assault charge in 1986, which he was acquitted of after his attorney argued that the woman tripped and fell on a telephone cord in his home. In 1995, a $374,000 default judgment was made against him after his former girlfriend alleged he had physically assaulted her after their breakup and caused her to miscarry their child.

In the latter half of the 1990s, he was involved in two severe automobile collisions, which he barely survived. In an accident in August 1996 Vincent broke three vertebrae in his neck. He also sustained a permanent injury to his vocal cords from an emergency medical procedure, leaving him with a permanently raspy voice.

Vincent was charged with drunk driving again after his 1996 accident and once again sentenced to rehab and placed on probation. In an interview on the TV program The Insider on September 18, 2007, when asked about his 1996 car accident, he answered, “Y’know, I have no idea what you’re talking about. I don't remember being in an accident.”

In 2000, Vincent violated probation for his prior alcohol-related arrests by appearing drunk in public three times and assaulting his fiancee, Patricia. As a result, he was sentenced to 60 days in Orange County Jail.

Vincent was involved in another automobile accident in 2008.

Vincent married his first wife, Bonnie Poorman, his “college classmate sweetheart” in 1969 and they had a daughter, Amber Vincent, in 1973. His second wife, Joanne Robinson, left him and had a restraining order entered against him in 1994, alleging that he had abused her since their marriage in 1985.

In an October 2014 interview with National Enquirer, Vincent revealed that his right leg was amputated just below the knee in 2012 after he contracted a leg infection as a result of complications from peripheral artery disease. He now walks with a prosthetic limb, though sometimes he is forced to use a wheelchair. He also revealed he had tax debt in excess of $70,000.

As of 2013, Vincent resides near Vicksburg, Mississippi.

Vincent died on February 10, 2019, aged 73,in Asheville, North Carolina due to cardiac arrest while hospitalized at Mission Hospital Memorial Campus. Bradycardia, a decreased heart rate, was listed as an underlying cause of death.
His death was not publicly announced until March 8, when TMZ broke the news, and showed a slightly redacted copy of his death certificate.
He is survived by his third wife, Patricia Ann Christ, and his daughter, Amber Vincent, from his first marriage.
More Alchetron Topics