Geoffrey Roy Rush AC (born 6 July 1951) is an internationally renowned Australian actor and film producer. He is the youngest of the few people who have won the "Triple Crown of Acting": the Academy Award, the Primetime Emmy Award, and the Tony Award. He has won one Academy Award for acting (from four nominations), three British Academy Film Awards (from five nominations), two Golden Globe Awards and four Screen Actors Guild Awards. He is the founding President of the Australian Academy of Cinema and Television Arts and was named the 2012 Australian of the Year. He is also the first actor to win the Academy Award, BAFTA Award, Critics’ Choice Movie Award, Golden Globe Award, Screen Actors Guild Award for a single performance in film for his performance in Shine (1996). 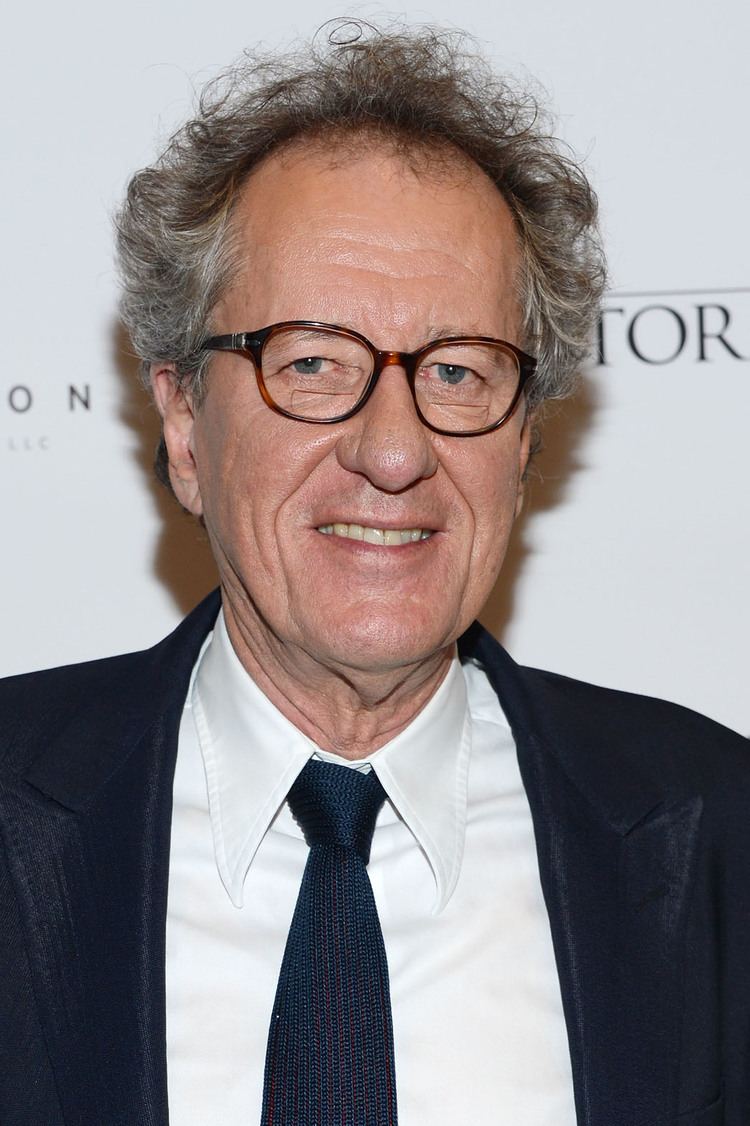 Actor Geoffrey Rush “Pirates of the Caribbean: Dead Men Tell No Tales” Joins The RE Show - 5/18/17

Rush was born in Toowoomba, Queensland, to Merle, a department store sales assistant, and Roy Baden Rush, an accountant for the Royal Australian Air Force. His father was of English, Irish, and Scottish ancestry, and his mother was of German descent. His parents divorced when he was five, and his mother subsequently took him to live with her parents in suburban Brisbane. Before he began his acting career, Rush attended Everton Park State High School and graduated from the University of Queensland with Bachelor's Degree in Arts. While at university, he was talent-spotted by Queensland Theatre Company (QTC) in Brisbane. Rush began his career with QTC in 1971, appearing in 17 productions. 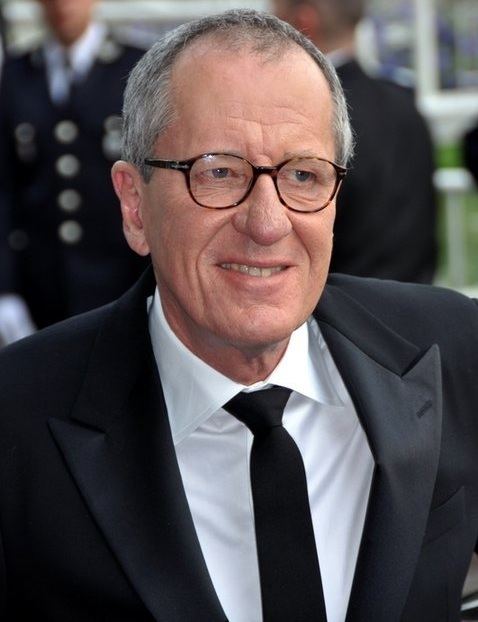 In 1975, Rush went to Paris for two years and studied mime, movement and theatre at L'Ecole Internationale de Theatre Jacques Lecoq, before returning to resume his stage career with QTC. In 1979, he shared an apartment with actor Mel Gibson for four months while they co-starred in a stage production of Waiting for Godot. 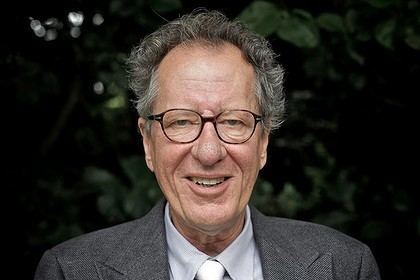 Rush made his theatre debut in the QTC's production of Wrong Side of the Moon. He worked with the QTC for four years, appearing in roles ranging across classical plays and pantomime, from Juno and the Paycock to Hamlet on Ice. Following these, Rush left for Paris where he studied further.

Rush's acting credits include Shakespeare's plays, The Winter's Tale (with the State Theatre Company of South Australia in 1987 at The Playhouse in Adelaide) and Troilus and Cressida (at the Old Museum Building in 1989). He also appeared in an ongoing production of Oscar Wilde's The Importance of Being Earnest as John Worthing (Ernest) (in which his wife, Jane Menelaus, appeared as Gwendolen).

In September 1998, Rush played the title role in the Beaumarchais play The Marriage of Figaro for the QTC. This was the opening production of the Optus Playhouse at the Queensland Performing Arts Centre at South Bank in Brisbane. A pun on Rush's name (and the circumstances) was used in the opening prologue of the play with the comment that the "Optus Playhouse was opening with a Rush".

Rush has appeared on stage for the Brisbane Arts Theatre and in many other theatre venues. He has also worked as a theatre director. In 2007, he starred as King Berenger in a production of Eugene Ionesco's Exit the King at the Malthouse Theatre in Melbourne and Company B in Sydney, directed by Neil Armfield. For this performance, he received a Helpmann Award nomination for best male actor in a play.

Rush made his Broadway debut in a restaging of Exit the King under Malthouse Theatre's touring moniker Malthouse Melbourne and Company B Belvoir. This restaging featured a new American cast including Susan Sarandon. The show opened on 26 March 2009 at the Ethel Barrymore Theatre. Rush won the Outer Critics Circle Award, Theatre World Award, Drama Desk Award, the Distinguished Performance Award from the Drama League Award and the 2009 Tony Award for Best Performance by a Leading Actor in a Play.

In 2010, Rush played Man in Chair in The Drowsy Chaperone on its Australian tour.

In 2011, Rush played the lead in a theatrical adaptation of Nikolai Gogol's short story The Diary of a Madman at the Brooklyn Academy of Music. Rush won for this role Helpmann Award and was nominated for the Drama Desk Award.

From November 2011, Rush played the role of Lady Bracknell in the Melbourne Theatre Company production of The Importance of Being Earnest. Other actors from the 1988 production include Jane Menelaus, this time as Miss Prism, and Bob Hornery, who had played Canon Chasuble, as the two butlers.

Rush made his film debut in the Australian film Hoodwink in 1981. His next film was Gillian Armstrong's Starstruck, the following year. In the coming years he appeared in small roles on television dramas, including a role as a dentist in a 1993 episode of the British television series Lovejoy. He made his breakthrough performance in 1996 with Shine, for which he won the Academy Award for Best Actor.

In 1998, he appeared in three major films: Les Miserables, Elizabeth, and Shakespeare in Love for which he received his second Academy Award nomination as Academy Award for Best Supporting Actor.

In 1999, Rush took the lead role as Steven Price in the horror film House on Haunted Hill. In 2000, he received his third Academy Award nomination, for Quills, in which he played the Marquis de Sade.

Rush's career continued at a fast pace, with nine films released from 2001 to 2003. He starred in the film Pirates of the Caribbean: The Curse of the Black Pearl, as Captain Hector Barbossa, also appearing in its sequels, Dead Man's Chest, At World's End and On Stranger Tides.

Rush reprised his character's voice for the enhancements at the Pirates of the Caribbean attractions at Disneyland and the Magic Kingdom theme parks, which involved an Audio-Animatronic with Rush's likeness being installed (including one at Tokyo Disneyland). He also voiced Nigel the pelican in Finding Nemo.

In 2006, Rush hosted the Australian Film Institute Awards for the Nine Network. He was the Master of Ceremonies again at the 2007 AFI Awards.

In the beginning of 2009, Rush appeared in a series of special edition postage stamps featuring some of Australia's internationally recognised actors. He, Cate Blanchett, Russell Crowe, and Nicole Kidman each appear twice in the series. Rush's image is taken from Shine.

In 2010, Rush played speech therapist Lionel Logue in The King's Speech, a part that earned him a BAFTA and nominations for the Academy Awards and Golden Globe Awards for Best Supporting Actor.

Rush returned as Captain Hector Barbossa in Pirates of the Caribbean: On Stranger Tides, starring Johnny Depp, in 2011. Rush is also preparing for a film version of The Drowsy Chaperone, an award-winning stage musical. In addition, he voiced the alien Tomar-Re in the film adaptation of the Green Lantern comic book series.

In 2011, Rush made a cameo in a commercial, The Potato Peeler, for the Melbourne International Film Festival (MIFF), playing a Polish peasant. He spoke his lines in Polish for the part.

In August 2011 he was appointed the foundation President of the newly formed Australian Academy of Cinema and Television Arts.

In 2013, Rush starred alongside Jim Sturgess in The Best Offer and the film version of the best-selling novel The Book Thief. On August 4, 2015, Rush appeared on the documentary TV series Who Do You Think You Are? on Series 7, Episode 1 on the SBS.

Since 1988, Rush has been married to actress Jane Menelaus, with whom he has a daughter, Angelica (born 1992), and a son, James (born 1995). Geoffrey Rush lives in Camberwell, Victoria.