Qinghai (Chinese: ; pinyin: ; Wade–Giles: ; pronounced [t??i?xa?, also known as Tsinghai, formerly known in English as Kokonor, is a province of the Peoples Republic of China located in the northwest of the country. As one of the largest province-level administrative divisions of China by area, the province is ranked fourth-largest in size, but has the third-smallest population.

Located mostly on the Qinghai-Tibet plateau, the province has long been a melting pot for a number of ethnic groups including the Han, Tibetans, Hui, Tu, Mongols, and Salars. Qinghai borders Gansu on the northeast, Xinjiang on the northwest, Sichuan on the southeast, and the Tibet Autonomous Region on the southwest. Qinghai province was established in 1928 under the Republic of China period during which it was ruled by Chinese Muslim warlords known as the Ma clique. The Chinese name, "Qinghai" is named after Qinghai Lake (cyan sea lake), the largest lake in China. The province was known formerly as Kokonur in English, derived from the Oirat name for Qinghai Lake.

This is my hometown xining qinghai 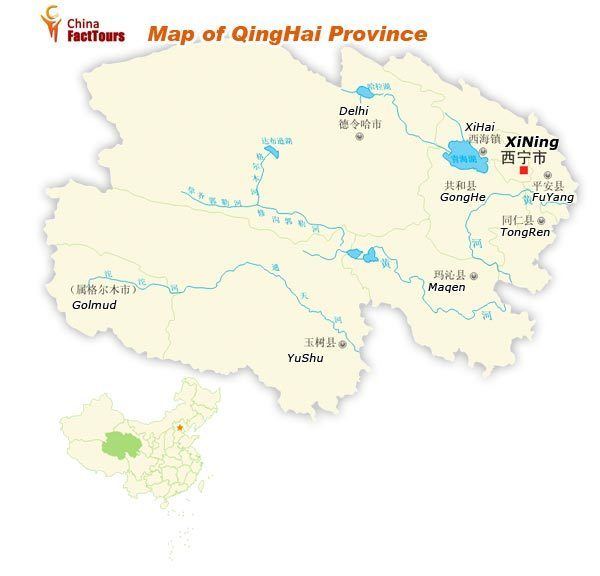 During Chinas Bronze Age, Qinghai was home to the Qiang people who traditionally made a living in agriculture and husbandry, the Kayue culture. The eastern part of the area of Qinghai was under the control of the Han dynasty about 2000 years ago. It was a battleground during the Tang and subsequent Chinese dynasties when they fought against successive Tibetan tribes.

In the middle of 3rd century CE, nomadic people related to the Mongolic Xianbei migrated to pasture lands around Koko Nur (Qinghai Lake) and established Tuyuhun Kingdom. Since the 7th century, Tuyuhun Kingdom was attacked by both the Tibetan Empire and Tang dynasty as both of them sought control over trade routes. Military conflicts severely weakened the kingdom and it was incorporated into the Tibetan Empire. After the disintegration of the Tibetan Empire, small local factions emerged, some under the titular authority of China. The Song dynasty defeated the Tibetan Kokonor Kingdom in the 1070s. During the Yuan dynastys administrative rule of Tibet, the region comprising the headwaters of the Yellow and Yangtze rivers - what modern Tibetan nationalists call "Amdo" - was apportioned to different administrative divisions than Tibet proper.

Most of Qinghai was once also a short time under the control of early Ming dynasty, but later gradually lost to the Khoshut Mongols. The Xunhua Salar Autonomous County is where most Salar people live in Qinghai. The Salars migrated to Qinghai from Samarkand in 1370. The chief of the four upper clans around this time was Han Pao-yuan and Ming granted him office of centurion, it was at this time the people of his four clans took Han as their surname. The other chief Han Shan-pa of the four lower Salar clans got the same office from Ming, and his clans were the ones who took Ma as their surname.

From 1640 to 1724, a big part of the area that is now Qinghai was under Khoshut Mongol control, but in that year it was conquered by the armies of the Qing dynasty. It was during the 1720s when Xining Prefecture was established and its borders were roughly those of modern Qinghai province. Xining, the capital of modern Qinghai province was built in this period as the administrative center. During the rule of the Qing dynasty, the governor was a viceroy of the Qing Emperor, but the local ethnic groups enjoyed much autonomy. Many chiefs retained their traditional authority, participating in local administrations. The Dungan revolt (1862–77) devastated the Hui Muslim population of Shaanxi, shifting the Hui center of population to Gansu and Qinghai. Another Dungan revolt broke out in Qinghai in 1895 when various Muslim ethnic groups in Qinghai and Gansu rebelled against the Qing. Following the overthrow of the Qing dynasty in 1911, the region came under Chinese Muslim warlord Ma Qi control until the Northern Expedition by the Republic of China consolidated central control in 1928.

In July–August 1912, General Ma Fuxiang was "Acting Chief Executive Officer of Kokonur" (de facto Governor of the region that later became Qinghai). In 1928, Qinghai province was created. Previously, it was part of Gansu, as the "Tibetan frontier district". The Muslim warlord and General Ma Qi became military governor of Qinghai, followed by his brother Ma Lin (warlord) and then Ma Qis son Ma Bufang. In 1932 Tibet invaded Qinghai, attempting to capture southern parts of Qinghai province, following contention in Yushu, Qinghai over a monastery in 1932. The army of Ma Bufangs defeated the Tibetan armies. Governor of Qinghai, Ma Bufang was described as a socialist by American journalist John Roderick and friendly compared to the other Ma Clique warlords. Ma Bufang was reported to be good humoured and jovial in contrast to the brutal reign of Ma Hongkui. Most of eastern China was ravaged by the Second Sino-Japanese War and the Chinese Civil War, by contrast, Qinghai was relatively untouched.

Ma Bufang increased the prominence of the Hui and Salar people in Qinghais politics by heavily recruiting to his army from the counties in which those ethnic groups predominated. General Ma started a state run and controlled industralization project, directly creating educational, medical, agricultural, and sanitation projects, run or assisted by the state. The state provided money for food and uniforms in all schools, state run or private. Roads and a theater were constructed. The state controlled all the press, no freedom was allowed for independent journalists.

As the 1949 Chinese revolution approached Qinghai, Ma Bufang abandoned his post and flew to Hong Kong, traveling abroad but never returning to China. On January 1, 1950, the Qinghai Province Peoples Government was declared, owing its allegiance to the new Peoples Republic of China. Aside from some minor adjustments to suit the geography, the PRC maintained the provinces territorial integrity. Resistance to Communist rule continued in the form of the Huis Kuomintang Islamic insurgency (1950-58), spreading past traditionally Hui areas to the ethnic-Tibetan south. Although the Hui comprised 15.6% of Qinghais population in 1949, making the province the second-largest concentration of Hui after Ningxia, the state denied the Hui ethnic autonomous townships and counties that their numbers warranted under Chinese law until the 1980s. 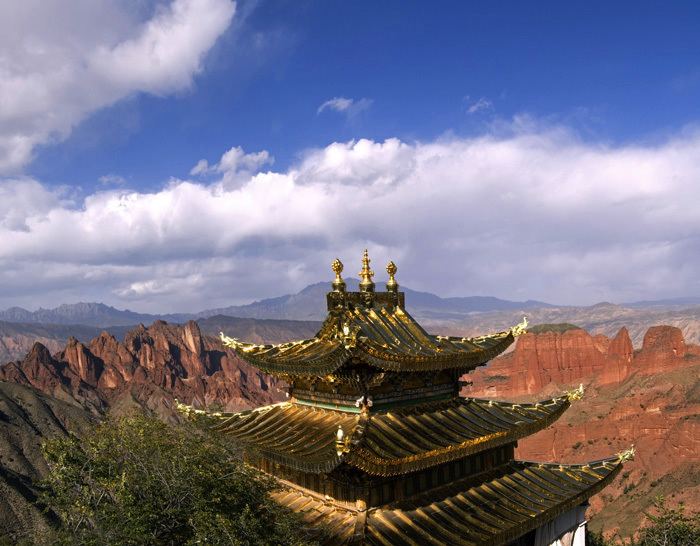 Qinghai is located on the northeastern part of the Tibetan Plateau. The Yellow River originates in southern part of the province, while the Yangtze and Mekong have their sources in the southwestern part. Qinghai is separated by the Riyue Mountain into pastoral and agricultural zones in the west and east. 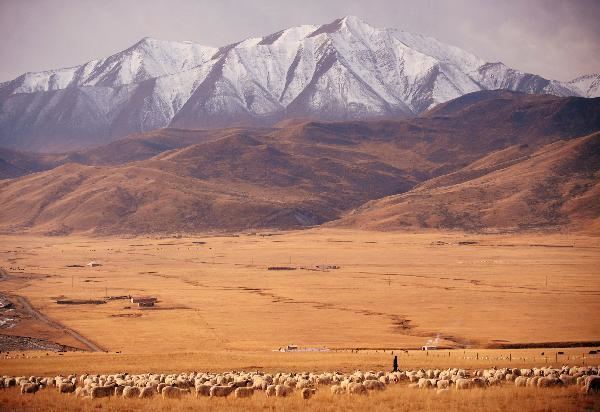 The average elevation of Qinghai is over 3,000 metres (9,800 ft) above sea level. Mountain ranges include the Tanggula Mountains and Kunlun Mountains, with the highest point being Bukadaban Feng at 6,860 metres (22,510 ft). Due to the high altitude, Qinghai has quite cold winters (harsh in the highest elevations), mild summers, and a large diurnal temperature variation. Its mean annual temperature is approximately ?5 to 8 °C (23 to 46 °F), with January temperatures ranging from ?18 to ?7 °C (0 to 19 °F) and July temperatures ranging from 15 to 21 °C (59 to 70 °F). It is also prone to heavy winds as well as sandstorms from February to April. Significant rainfall occurs mainly in summer, while precipitation is very low in winter and spring, and is generally low enough to keep much of the province semi-arid or arid.

By area, Qinghai is the largest province in the Peoples Republic of China (excluding the autonomous regions). Qinghai Lake is the largest salt water lake in China, and the second largest in the world. The Qaidam basin lies in the northwest part of the province. About a third of this resource rich basin is desert. The basin has an altitude between 3000 to 3500 meters.

The Sanjiangyuan National Nature Reserve, is located in Qinghai and contains the headwaters of the Yellow River, Yangtze River, and Mekong River. The reserve was established to protect the headwaters of these three rivers and consists of 18 subareas, each containing three zones which are managed with differing degrees of strictness. 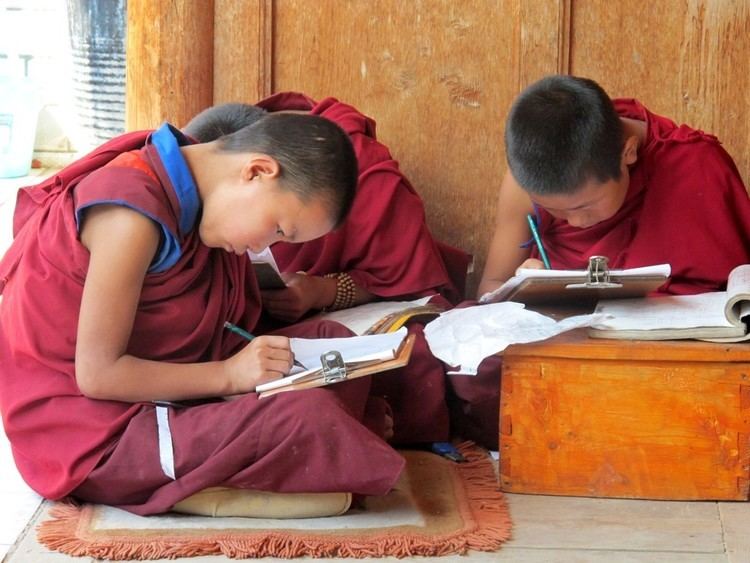 Qinghai has been influenced by the interactions "between Mongol and Tibetan culture, north to south, and Han Chinese and Inner Asia Muslim culture, east to west". The languages of Qinghai have for centuries formed a Sprachbund, with Zhongyuan Mandarin, Amdo Tibetan, Salar, Yugur, and Monguor borrowing from and influencing one another. In mainstream Chinese culture, Qinghai is most associated with the Tale of King Mu, Son of Heaven. According to this legend, King Mu of Zhou (r. 976–922 BCE) pursued hostile Quanrong nomads to eastern Qinghai, where the goddess Xi Wangmu threw the king a banquet in the Kunlun Mountains. 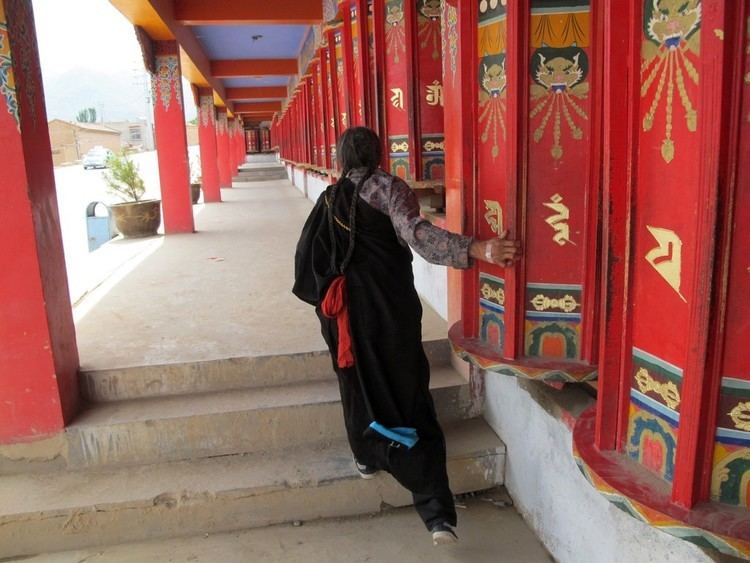 The main religions in Qinghai are Tibetan Buddhism and Islam. The Dongguan Mosque has been continuously operating since 1380. Measures of education in Qinghai are low, particularly among the Muslim ethnic groups such as the Hui and Salar, who sometimes prefer to send their children to madrasahs rather than secular schools. The yak, which is native to Qinghai, is widely used in the province for transportation and its meat. The Mongols of Qinghai celebrate the Naadam festival on the Qaidam Basin every year.

Many tourist attractions center on Xining, the provincial seat of Qinghai. 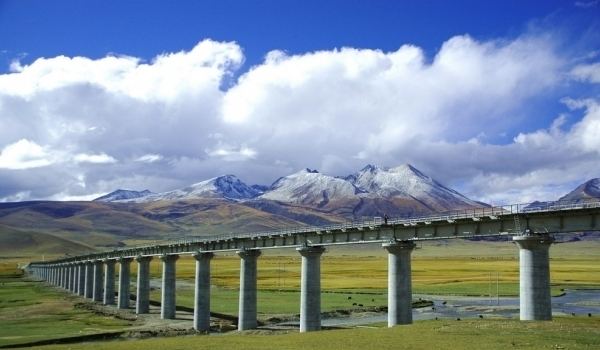 During the hot summer months, many tourists from the hot Southern and Eastern parts of China travel to Xining, as the climate of Xining in July and August is quite mild and comfortable, making the city an ideal summer retreat.

Qinghai Lake (, qinghai hu) is another tourist attraction, albeit further from Xining than Kumbum Monastery (Taer Si). The lake is the largest saltwater lake in China, and is also located on the "Roof of the World," the Tibetan Plateau. The lake itself lies at 3,600m elevation. The surrounding area is made up of rolling grasslands and populated by ethnic Tibetans. Most pre-arranged tours stop at Bird Island (, niao dao). An international bicycle race takes place annually from Xining to Qinghai Lake. 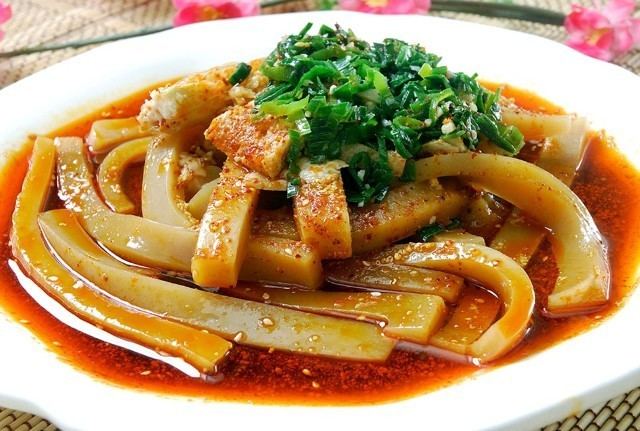 A cuisine (/kw??zin/ kwi-ZEEN , from French cuisine, "cooking; culinary art; kitchen"; ultimately from Latin coquere, "to cook") is a style of cooking characterized by distinctive ingredients, techniques and dishes, and usually associated with a specific culture or geographic region. A cuisine is primarily influenced by the ingredients that are available locally or through trade. Religious food laws, such as Islamic and Jewish dietary laws, can also exercise a strong influence on cuisine. Regional food preparation traditions, customs and ingredients often combine to create dishes unique to a particular region.

Some of the elements that have an influence on a regions cuisine include the areas climate, which in large measure determines the native foods that are available, the economic conditions, which affect trade and can affect food distribution, imports and exports, and religiousness or sumptuary laws, under which certain foods and food preparations are required or proscribed.

Climate also affects the supply of fuel for cooking; a common Chinese food preparation method was cutting food into small pieces to cook foods quickly and conserve scarce firewood and charcoal. Foods preserved for winter consumption by smoking, curing, and pickling have remained significant in world cuisines for their altered gustatory properties even when these preserving techniques are no longer strictly necessary to the maintenance of an adequate food supply.