Esther Brown as Princess Tharbis of Ethopia in The Ten Commandments (1956).

A Cushite princess of Kingdom of Kush, Tharbis (alternatively Adoniah) is said to have married the Hebrew Moses prior to his ascendancy to prophethood and better-known marriage to Zipporah.

Tharbis is alleged to have been the daughter of King Merops, or the widow of Kikianus.

According to the historian Josephus, in Moses' early adult life, he had led the Egyptians in a campaign against invading Ethiopians and defeated them. While Moses was besieging the city of Meru, Tharbis watched him lead the Egyptian army from within the city walls, and fell in love with him. He agreed to marry her if she would procure the deliverance of the city into his power. She did so immediately and Moses promptly married her. The account of this expedition is also mentioned by Irenaeus.

After the war, when Moses sought to return to Egypt – Tharbis is said to have resisted and insisted that he remain in Ethiopia as her husband. He then, being "most skilful in astronomy", cast two rings; one which caused the wearer to become forgetful, and the other to cause the wearer to remember all. He gave the first ring to Tharbis, and wore the second himself, and waited for her oblivious nature to lose interest in retaining him as a husband – and when she had forgotten her love for him, he returned to Egypt alone. Some have suggested this period may have started when Moses was 27, and that he remained with Tharbis for forty years; although this number contradicts the traditional sources which suggest that Moses killed an Egyptian overseer when he was approximately 40 years old himself. 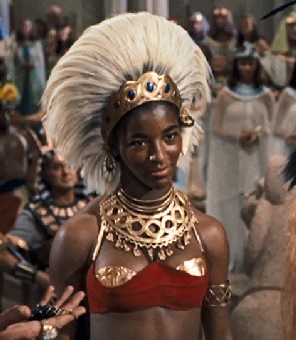 Some have suggested that this story is an invention, arising from the "enigmatic" verse in Numbers 12:1 that states "Miriam and Aaron spoke against Moses because of the Cushite woman whom he had married". Miriam is punished for her rebuke of her brother by being afflicted with leprosy.

It is also suggested that Artapanus of Alexandria may have concocted the story "to impress his pagan audience" with "such a love story".

In 1937, Amy Redpath Roddick published an 80-page "poetic drama" telling a fictionalised account of the life of Tharbis.

Tharbis is portrayed by UCLA student Esther Brown in Cecil B. DeMille's 1956 biblical-epic The Ten Commandments. In the film, Anne Baxterʻs character Nefretiri is jealous of her after she says, "Great King (Seti I), I will ask but one favor of your friendship. This green stone from our mountains... that I may give it to your prince of Egypt, for he is kind as well as wise."