In the early 19th century in the English village of Meryton, the arrival of wealthy bachelors, most notably Mr. Darcy (Laurence Olivier), stirs up the families with single daughters. Among those is the Bennet family, with five eligible daughters, including the spirited Elizabeth (Greer Garson) and her pretty older sister, Jane (Maureen OSullivan). As Mrs. Bennet (Mary Boland) aggressively tries to pair off her girls, Elizabeth crosses swords with the imperious Darcy. 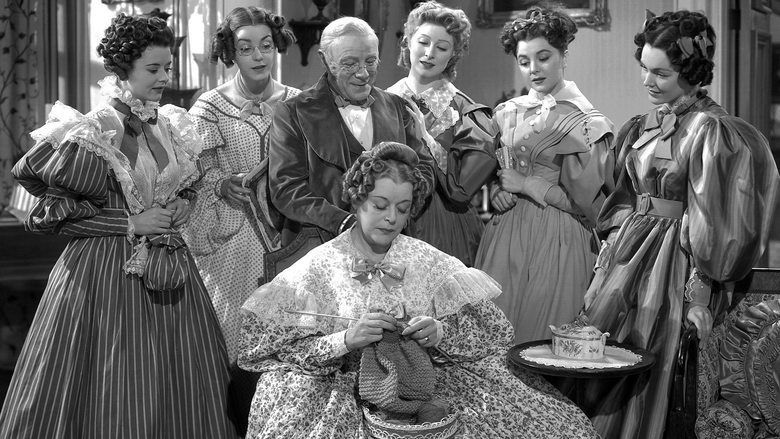 Pride and Prejudice is a 1940 American film adaptation of Jane Austens novel Pride and Prejudice, directed by Robert Z. Leonard and starring Greer Garson and Laurence Olivier. The screenplay was written by Aldous Huxley and Jane Murfin, adapted specifically from the stage adaptation by Helen Jerome in addition to Jane Austens novel. The film is about five sisters from an English family of landed gentry who must deal with issues of marriage, morality, and misconceptions. The film was released by MGM on July 26, 1940 in the United States, and was critically well received. The New York Times film critic praised the film as "the most deliciously pert comedy of old manners, the most crisp and crackling satire in costume that we in this corner can remember ever having seen on the screen." 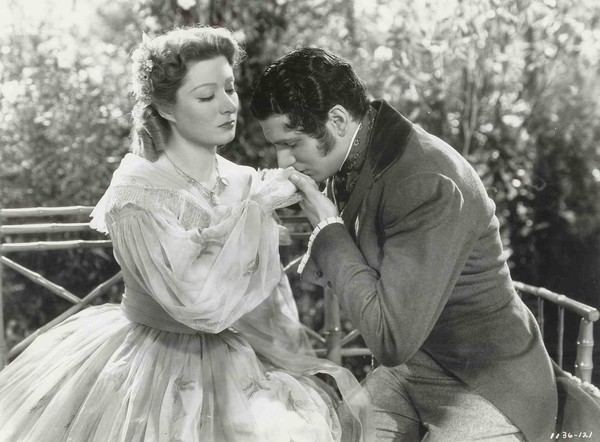 The film differs from the novel in a number of ways. The period of the film, for example, is later than that of Austens novel—a change driven by the studios desire to use more elaborate and flamboyant costumes than those from Austens time period. Some scenes were altered significantly. For example, in the confrontation near the end of the film between Lady Catherine de Bourgh and Elizabeth Bennet, the formers haughty demand that Elizabeth promise never to marry Darcy was changed into a hoax to test the mettle and sincerity of Elizabeths love. In the novel, this confrontation is an authentic demand motivated by Lady Catherines snobbery and, especially, by her ardent desire that Darcy marry her own daughter. 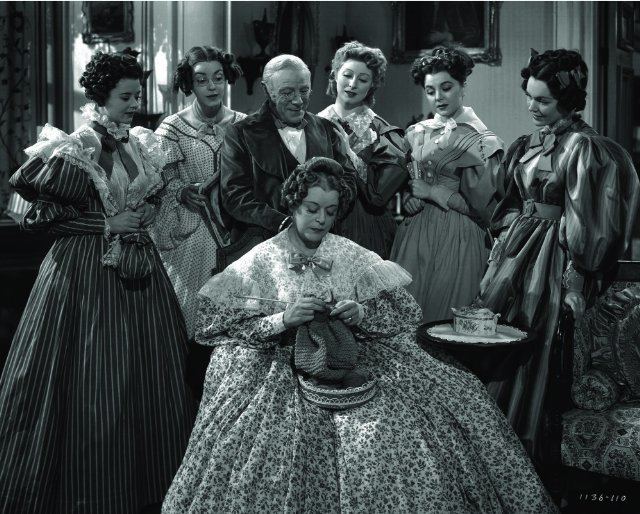 Mr. and Mrs. Bennet have five unmarried daughters, and Mrs. Bennet is especially eager to find suitable husbands for them. When the rich single gentlemen Mr. Bingley and Mr. Darcy come to live nearby, the Bennets have high hopes. But pride, prejudice, and misunderstandings all combine to complicate their relationships and to make happiness difficult. 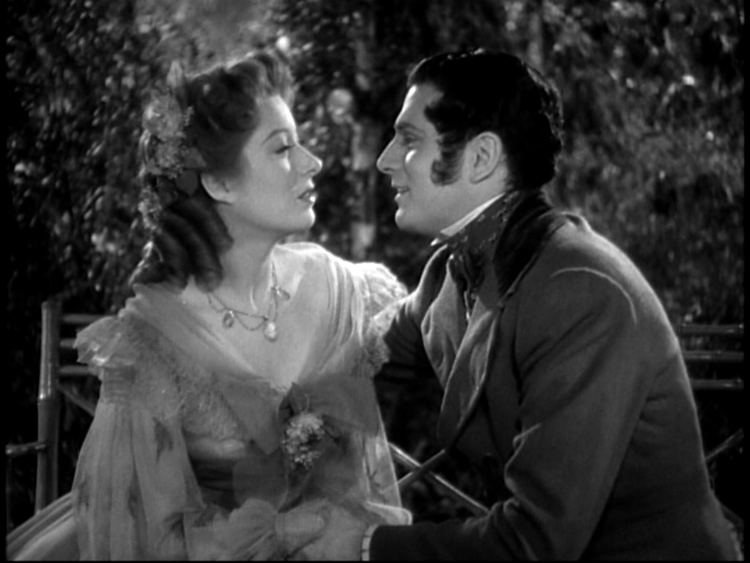 Mrs. Bennet (Mary Boland) and her two eldest daughters, Jane (Maureen OSullivan) and Elizabeth (Greer Garson), are shopping for new dresses when they see two gentlemen and a lady alight from a very expensive carriage outside. They learn that the men are Mr. Bingley (Bruce Lester), who has just rented the local estate of Netherfield, and Mr. Darcy (Laurence Olivier), both wealthy, eligible bachelors, which excites Mrs. Bennet. Collecting her other daughters, Mrs Bennet returns home, where she tries to make Mr. Bennet see Mr. Bingley, but he refuses, having already made his acquaintance.

The Bennets cousin, Mr. Collins (Melville Cooper), who will inherit the Bennet estate upon the death or Mr. Bennet, arrives, looking for a wife, and decides that Elizabeth will be suitable. At ball held at Netherfield, he keeps following her around and wont leave her alone. Mr. Darcy surprisingly helps her out, and later asks her to dance. After seeing the reckless behaviour of her mother and younger sisters however, he leaves her again, making Elizabeth very angry with him once more. The next day, Mr. Collins asks her to marry him, but she refuses point blank. He then goes and becomes engaged to her best friend, Charlotte Lucas (Karen Morley).

Elizabeth visits Charlotte in her new home. There, she is introduced to Lady Catherine de Bourgh (Edna May Oliver), and also encounters Mr. Darcy again. Later, he asks her to marry him, but she refuses, partly due to the story Wickham had told her about Darcy depriving him of his rightful fortune, and also because she has just learned that he broke up the romance between Mr. Bingley and Jane. They get into a heated argument and he leaves.

When Elizabeth returns to Longborn, she learns that Lydia has eloped with Wickham. Mr. Darcy visits her and tells her that Wickham will never marry Lydia. He reveals that Wickham had tried to elope with his then 15-year-old sister, Georgiana. After he leaves, Elizabeth realizes that she loves him, but believes he will never see her again because of Lydias disgraceful act. Lydia and Wickham return married to the house. Later, Lady Catherine visits and reveals that Mr. Darcy found Lydia and forced Wickham to marry her. Darcy reappears, and he and Elizabeth proclaim their love for each other. The movie ends with a long kiss between Elizabeth and Darcy, with Mrs. Bennet spying on them and seeing how her other daughters have found good suitors.

The filming of Pride and Prejudice was originally scheduled to start in October 1936 under Irving Thalbergs supervision, with Clark Gable and Norma Shearer cast in the leading roles. Following Thalbergs death on September 13, 1936, pre-production activity was put on hold. In August 1939, MGM had selected George Cukor to direct the film, with Robert Donat now cast opposite Shearer. The studio had considered filming in England, but these plans were changed at the start of the war in Europe in September 1939, which caused the closure of MGMs England operations. Cukor was eventually replaced by Robert Z. Leonard due to a scheduling conflict.

The film was critically well received. Bosley Crowther in his review for The New York Times described the film as "the most deliciously pert comedy of old manners, the most crisp and crackling satire in costume that we in this corner can remember ever having seen on the screen." Crowther also praised casting decisions and noted of the two central protagonists:

Greer Garson is Elizabeth—dear, beautiful Lizzie—stepped right out of the book, or rather out of ones fondest imagination: poised, graceful, self-contained, witty, spasmodically stubborn and as lovely as a woman can be. Laurence Olivier is Darcy, thats all there is to it—the arrogant, sardonic Darcy whose pride went before a most felicitous fall.

TV Guide, commenting upon the changes made to the original novel by this adaptation, calls the film "an unusually successful adaptation of Jane Austens most famous novel. Although the satire is slightly reduced and coarsened and the period advanced in order to use more flamboyant costumes, the spirit is entirely in keeping with Austens sharp, witty portrait of rural 19th century social mores." The reviewer goes on to note:

Garson never did anything better than her Elizabeth Bennet. Genteel but not precious, witty yet not forced, spirited but never vulgar, Garsons Elizabeth is an Austen heroine incarnate. Olivier, too, has rarely been better in a part requiring the passion of his Heathcliff from Wuthering Heights but strapping it into the straitjacket of snobbery.

The film received an 88% rating from Rotten Tomatoes (7 fresh and 1 rotten reviews).

Differences between the film and novel

Among aficionados of Jane Austens original novel, this movie adaptation diverges drastically from the novel and being excessively "Hollywoodized"—and for putting the women in clothes based on the styles of the late 1820s and the styles of the 1830s which were different from the Regency styles appropriate to the novels setting.

The timeframe of the movies plot progression is noticeably compressed, with certain events being juxtaposed in the film that were separated by days, weeks or even months in the novel. Wickham did not attend the Meryton ball where Darcy first insults Elizabeth, and in fact never attended any ball at which Darcy was also present. There is an archery scene between Darcy and Elizabeth that is not present at all in the novel. Darcys revelation of Wickhams attempted elopement with his own sister, Georgiana, is not done in person after Lydia and Wickhams elopement as is shown in the movie; in the novel, he describes these events to Elizabeth in the letter he delivers to her the day after she turns down his marriage proposal during her stay at Hunsford.

Also changed is the timing of Lydias elopement with Wickham. In the novel, Lydia follows Wickhams regiment to Brighton as the companion of the colonels wife, and elopes with Wickham from there. As described above, this takes place while Elizabeth is in Derbyshire with her Aunt and Uncle Gardiner, not after Elizabeths return from her visit to the Collins at Hunsford as happens in the movie. When Lydia and Wickham visit Longbourne after their wedding in the novel, which is several weeks after the initial elopement and Elizabeths return from Derbyshire, it is Lydia who reveals that Darcy was at their wedding, and it is Elizabeths Aunt Gardiner who, by letter, reveals his role in getting the elopees to the altar. Mary and Kitty do not have suitors at the end of the novel.

The following characters were eliminated completely from this film adaptation: