Kanyakumari, (Tamil: ,(???????????, Malayalam) also known as Kanniyakumari)  , formerly known as Cape Comorin, is a town in Kanyakumari District in the state of Tamil Nadu in India. It lies at the southernmost tip of the Indian subcontinent (the southern extremity of India as a whole being Indira Point on Great Nicobar Island). Cape Comorin is the southern tip of the Cardamom Hills, an extension of the Western Ghats range along the west coast of India. The nearest major city is Nagercoil, the administrative headquarters of Kanyakumari District, 22 km (14 mi) away. Kanyakumari was one of the important towns of the ancient Tamilakam (Sangam period) and is a popular tourist destination.

Places to visit in kanyakumari

Ptolemys geography describes commercial relations between western India and Alexandria, the chief eastern emporium of the Roman Empire. He identified Kanyakumari (Cape of Comorin) along with the Gulf of Mannar as a center for pearl fishery. He also identifies Korkai, a place to the east of Kanyakumari, as an emporium of pearl trade. 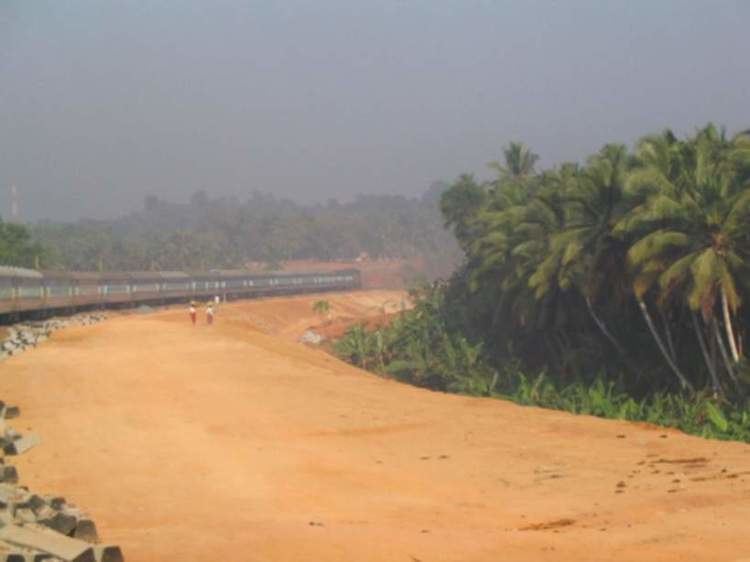 Another ancient Greek book, the Periplus of the Erythraean Sea, contains sailing directions for merchants from the Red Sea to the Indus and Malabar, and even indicates that the coast from Barygaza (Baroch) had a general southward direction down to and far beyond Cape Komari.

According to Christian legends, Christianity arrived in South India around AD 52 through St. Thomas, one of the twelve Apostles of Christ. However, European missionaries, who arrived in the 16th century, propagated Christianity in the area. St. Francis Xavier (7 April 1506 – 2 December 1552) was the pioneer in preaching Christianity in what is now Kanyakumari district.

Islam is believed to have entered the southern part of India through Kanyakumari during the early part of the eighth century AD through traders and missionaries who came through sea-routes. Islam, Christianity and Jainism have also contributed to the architectural wealth and literary heritage of the region.

Kanyakumari District consists of those parts known locally as Nanjil Nadu and Idai Nadu. The names of the villages of the district such as Azhagiapaandipuram, Bhoothapandy, Cholapuram and Kulasekaram reveal that these places were governed by several rulers at difficult periods of time. Nanjilnadu was under the rule of Pandiyas till the early 10th century and then under Cheras.

The Kalkulam and Vilavancode taluks were under the rule of the Chera Dynasty. When the power of Chola declined due to the rise of Hoysalas and western Chalukyas, the Venad (Travancore) Chieftains (descendants of the central Chera family) took advantage of the situation and gradually established their hold on considerable areas in Nanjilnadu. Veera Kerala Varma, one such chieftain, styled himself as "Nanjil Kuravan". The annexation commenced by Veera Kerala Varma was to a large extent continued by his successors and completed by AD 1115.

For about four centuries, the Venad was ruled by powerful kings who were consistently making incursions into the Pandian territories. As a result Vijayanagar kings proceeded against Venad. In 1609 Kanyakumari fell into the hands of Viswanatha Nayak of Madurai. Consequent on this, there was no serious threat to Nanjilnadu until 1634. During the regime of Ravi Varma and Marthanda Varma, Venad was disturbed by the internal strife.

Sanda Sahib of Arcot took advantage of this situation and attacked Nanjilnadu. Although Marthanda Varma could succeed in the famous battle at Colachel defeating the Dutch armouries who helped the local feudatories, he could not cope with the threat from Sanda sahib and made him to withdraw the battle field. After Marthanda Varma, Venad had weak rulers. Therefore there was frequent interference by the British whose control was completely established over Venad and continued till 1947. From 1947 to 1956, it was under the personal rule of Maharaja of Travancore. During the period between 1956–1961, the administrative system has fallen in line with that of other districts in Tamil Nadu. 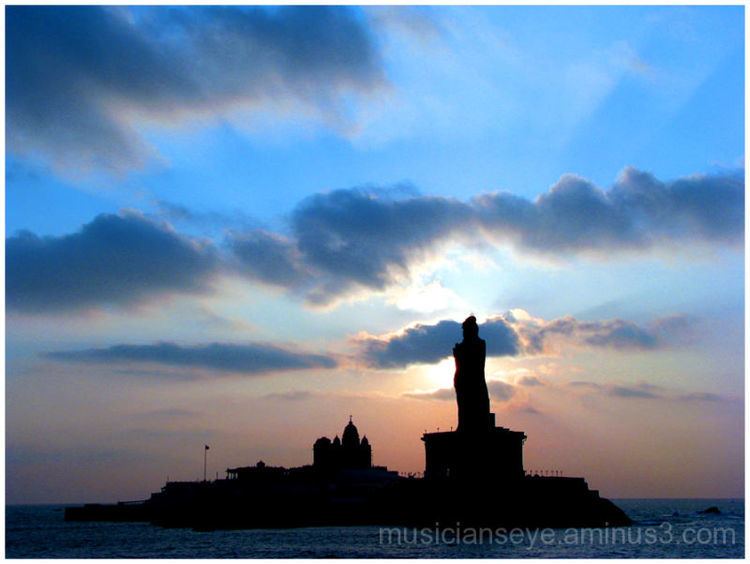 Kanyakumari is located at 8.08°N 77.57°E? / 8.08; 77.57. It has an average elevation of 300 metre. Contrary to the popular (and sensational) belief that Kanyakumari lies at the meeting point of three bodies of water, it borders only one: the Laccadive Sea to the southwest, south, and to the southeast. It is the confluence of the Western Coastal Plains and Eastern Coastal Plains. 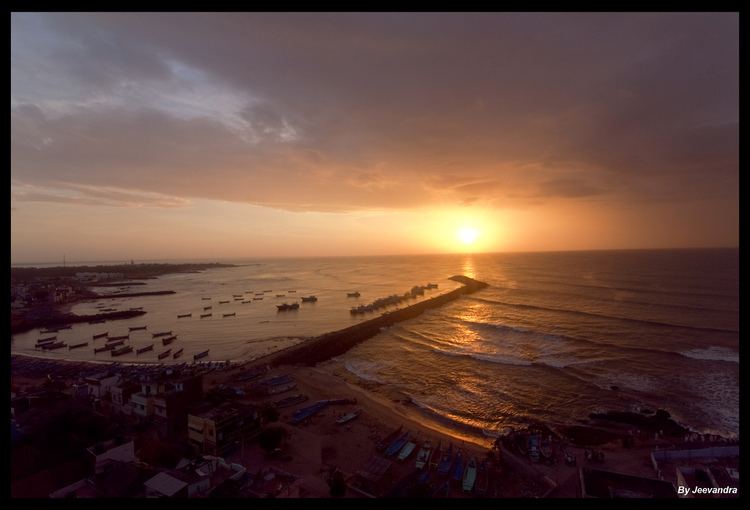 Kanyakumari is used geographically to define southern end of the Coromandel Coast region.

Theories have been proposed that a continent named Kumari Kandam once existed to the south of Kanyakumari and the Indian Subcontinent of Asia. It is similar to the proposed continent of Lemuria, variously located in the Indian and Pacific Oceans. 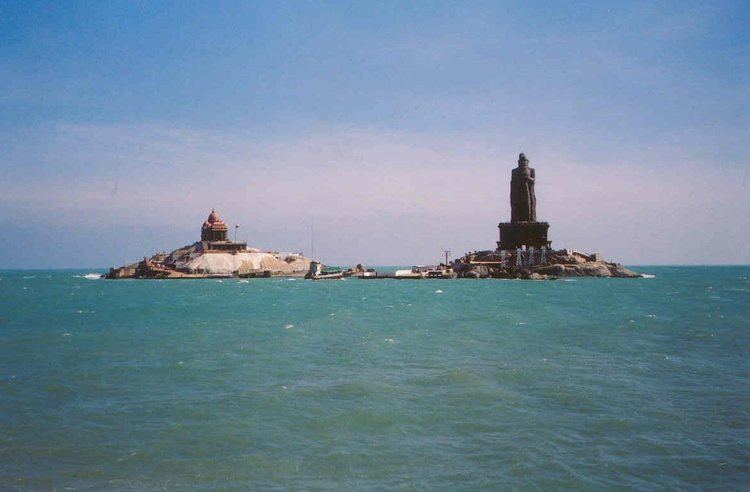 Since the early 1970s, tourism has been an the town. Because of this it is one of the few small towns in South India where one can hear many of the different languages of India spoken in the street. 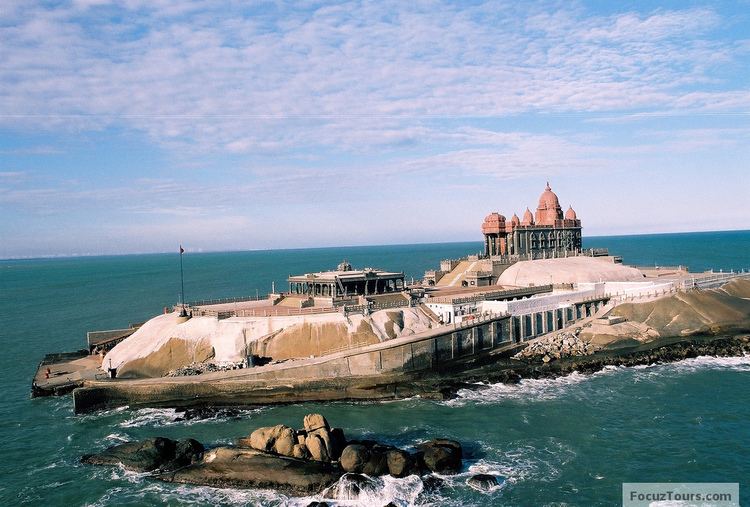 Of late, the promotion of tourism has increased, with increasing emphasis on attractions outside the town, such as the surrounding landscapes, as well as the historical and religious sites found around the district. Ultimately a total of 1.9 million tourists (domestic and foreign) visited Kanyakumari in 2007.

Though there are several places of tourist-interest in the town and district, Kanyakumari is especially popular in India for its spectacular and unique sunrise and sunset, thanks to its being nearly surrounded by waters. On balmy, full-moon evenings (locally called Chitra Pournami), one can also see the moon-rise and sunset at the same time. 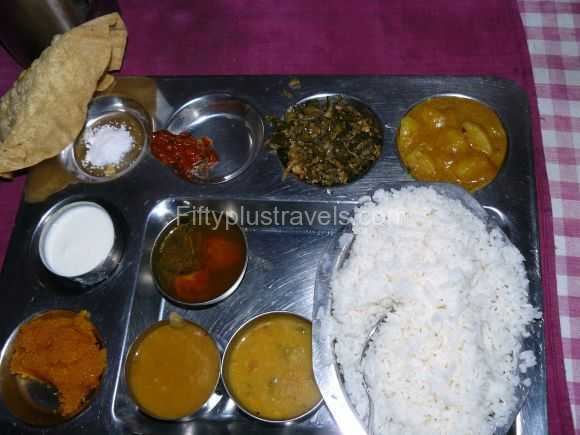 The main source of food is coming from rice and rice products. Those are may be used to make dosa, idily, appam and puttu, etc,.

Rice is the staple food of the people, although for some people in the hilly areas, tapioca is the main food. Though there are some vegetarians among the populace, a majority of the people use agro, meat and fish products. Fish caught in the seas around the district during the night or early morning hours reach the markets in the interior towns and villages in the early morning. Also they prepare a coffee made by karuppatti during the winter season. The food (for example, Chakkoli) is spicy, and the people in the district tend to use more grated coconut in their curries and food-preparations.