New York mobster Benjamin "Bugsy" Siegel (Warren Beatty) leaves New York City to dip into the glamour of Hollywood, Calif., and to build up syndicate gambling rackets. Bowled over by actress Virginia Hill (Annette Bening), the dapper Siegel courts her, despite having a wife and children. Obsessed with creating a gambling haven, Siegel takes racketeering to the Nevada desert and helps develop Las Vegas, only to find himself in deep water over his reckless construction of the Flamingo Hotel. 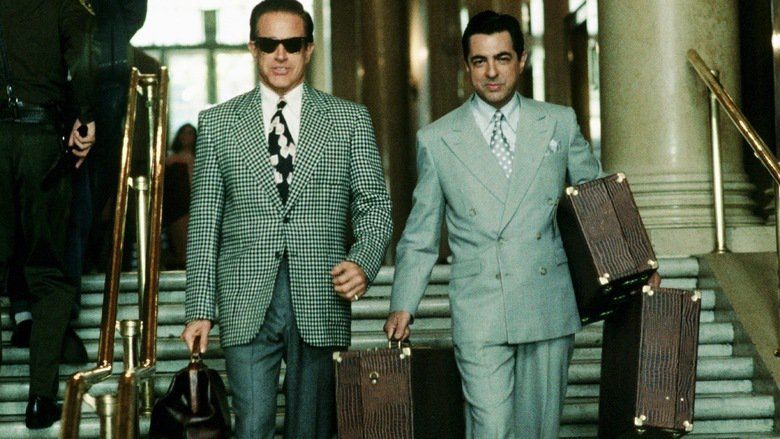 Bugsy is a 1991 American crime-drama film directed by Barry Levinson which tells the story of mobster Bugsy Siegel. It stars Warren Beatty and Annette Bening. The screenplay was written by James Toback from research material by Dean Jennings 1967 book We Only Kill Each Other. 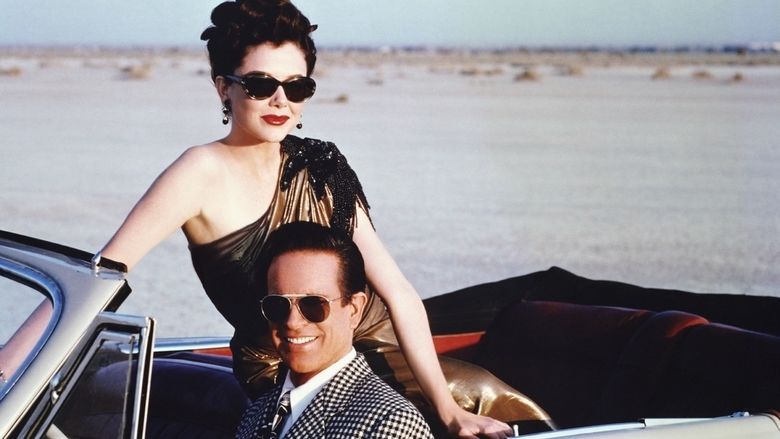 A directors cut was released on DVD, containing an additional 13 minutes not seen in the theatrical version. 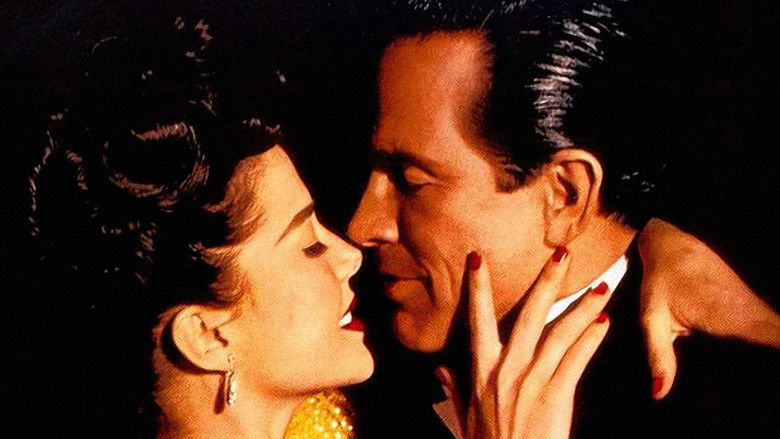 New York gangster Ben 'Bugsy' Siegel takes a brief business trip to Los Angeles. A sharp-dressing womanizer with a foul temper, Siegel doesn't hesitate to kill or maim anyone crossing him. In L.A. the life, the movies, and most of all strong-willed Virginia Hill detain him while his family wait back home. Then a trip to a run-down gambling joint at a spot in the desert known as Las Vegas gives him his big idea. 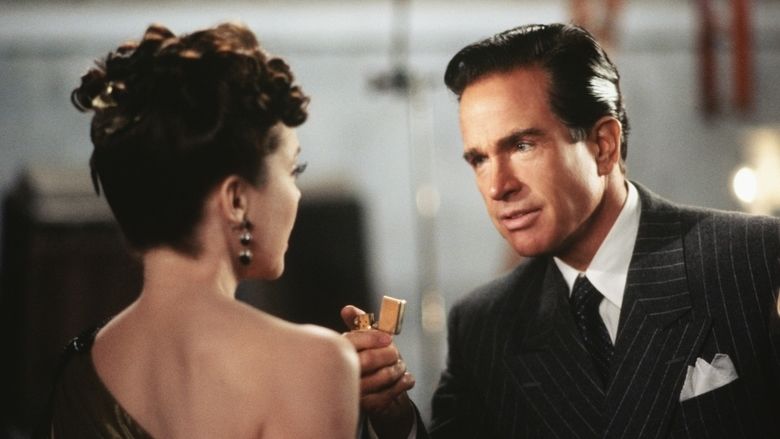 Gangster Benjamin "Bugsy" Siegel, who works for the New York mob, goes to California and instantly falls in love with Virginia Hill, a tough-talking Hollywood starlet. The two meet for the first time when Bugsy visits his friend, actor George Raft, on a film set. He buys a house in Beverly Hills from opera singer Lawrence Tibbett, planning to stay there while his wife and two daughters remain in Scarsdale. 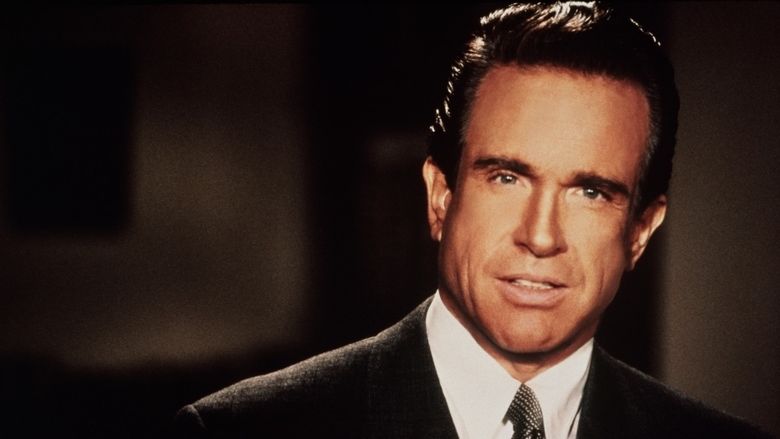 As a representative for his associates Meyer Lansky and Charlie Luciano, Bugsy is in California to wrestle control of betting parlors away from Los Angeles gangster Jack Dragna. Mickey Cohen robs Dragnas operation one day. He is confronted by Bugsy, who decides he should be in business with the guy who committed the robbery, not the guy who got robbed. Cohen is put in charge of the betting casinos; Dragna is forced to admit to a raging Bugsy that he stole $14,000, and is told he now answers to Cohen. 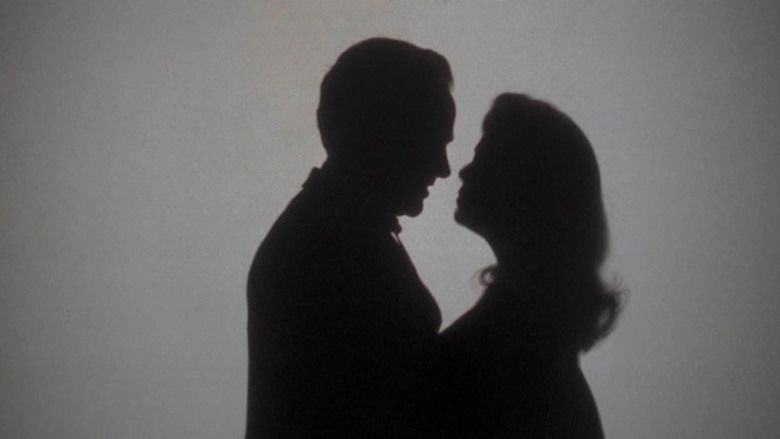 After arguments about Virginias trysts with drummer Gene Krupa and a variety of bullfighters and Siegels reluctance to get a divorce, Virginia makes a romantic move on Bugsy. On a trip to Nevada to visit a gambling joint, Bugsy comes up with the idea for a hotel and casino in the desert. He obtains $1 million in funding from lifelong friend Lansky and other New York mobsters, reminding them that in Nevada, gambling is legal. 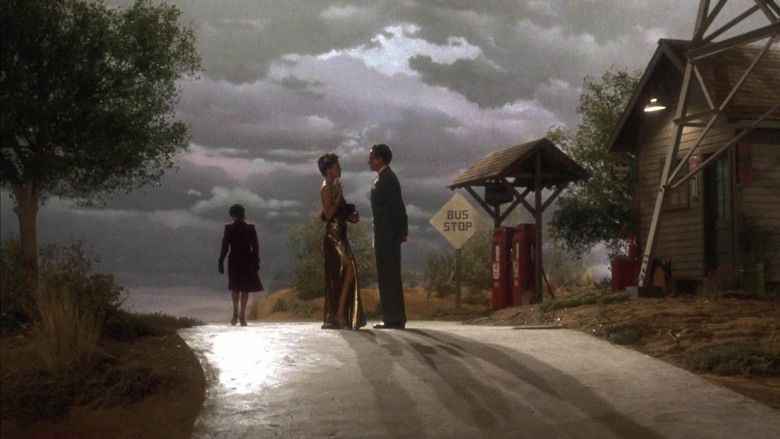 Virginia wants no part of it until Bugsy puts her in charge of accounting and begins construction of the Flamingo Las Vegas Hotel Casino in Las Vegas, Nevada, but the budget soon soars to $6 million due to his extravagance. Bugsy tries everything to ensure it gets completed, even selling his share of the casino. 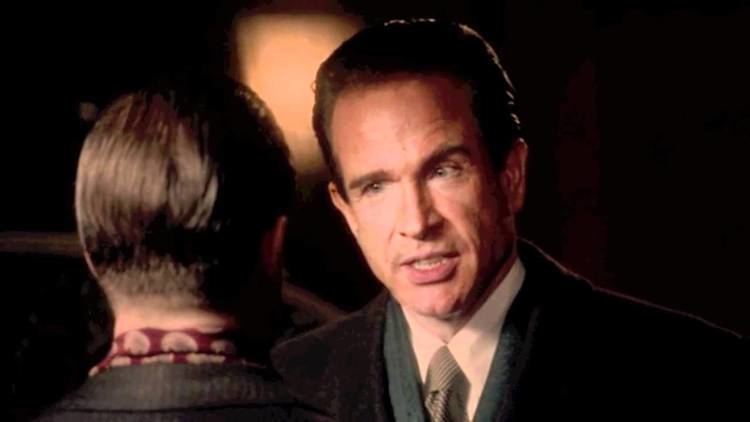 Bugsy is visited in Los Angeles by former associate Harry Greenberg. Harry has betrayed his old associates to save himself. He has also run out of money, from a combination of his gambling habits and being extorted by prosecutors who want his testimony. Though he is Harrys trusted friend, Bugsy has no choice but to kill him. He is arrested for the murder, but the only witness is a cab driver who dropped Harry off in front of Bugsys house. The driver is paid to leave town. 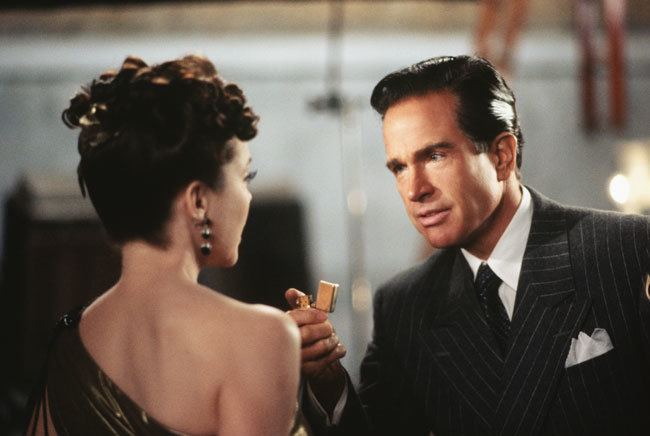 Lansky is waiting for Bugsy outside the jail. He gives a satchel of money to his friend. "Charlie doesnt have to know about it," he tells Bugsy, but warns, "I cant protect you anymore." The Flamingos opening night is a total failure, and $2 million of the budget is unaccounted for, whereupon Bugsy discovers that Virginia stole the money. He tells her to "keep it and save it for a rainy day." He then tells Lansky never to sell his share of the casino because he will live to thank him someday. 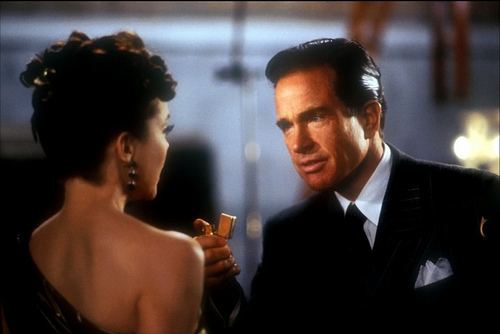 Later that night, Bugsy is shot and killed in his home. Virginia is told the news in Las Vegas and knows her own days could be numbered. An epilogue states that Virginia returned the missing money a week later and committed suicide at some point after that. It also states that by 1991, the $6 million invested in Bugsys dream of Las Vegas had generated revenues of over $100 billion.

Beattys desire to make and star in a film about Bugsy Siegel can be traced all the way back to the late 1970s and early 1980s. After completing Reds, Beatty had several projects he wanted to do but his two dream projects were to produce, star and possibly direct the life story of Howard Hughes and the life story of Bugsy. Beatty stated that of all the characters he played in films, such as Clyde Barrow in Bonnie and Clyde and John Reed in Reds, he felt he was the right actor to play both Bugsy and Hughes.

Beatty was fascinated by Siegel, whom he thought was a strange emblem of America (an American gangster who was the son of Jewish immigrants who became fascinated with Hollywood and who also envisioned a desert city in which legal gambling is allowed. Several filmmakers attempted to make a film based on Bugsys life, most famously French director Jean-Luc Godard, who wrote a script entitled The Story and envisioned Robert De Niro as Siegel and Diane Keaton as Virginia Hill. In the late 1970s, Beatty met screenwriter James Toback, with whom he became fast friends when Beatty was preparing Heaven Can Wait. Years later, when Beatty was in pre-production on Ishtar, he asked Toback to write a script on Bugsy.

During the course of six years and in between two films that he was involved in, Toback wrote a 400-page document of Bugsys life. However, under some strange circumstances, Toback lost the entire document. Under pressure from Warner Bros., whom Beatty learned also had a Bugsy Siegel script ready to be produced, Beatty pursued Toback to write a script based on his lost document. Toback handed his new script to Beatty. Beatty approved it and went to several studios in hopes of obtaining financing and distribution for the film. Beatty presented Tobacks script to Warner Bros. and claimed it was much better than the one Warner Bros. was interested in producing. Warner Bros. passed on the project, and Beatty eventually got the backing of TriStar Pictures.

Initially, Toback was under the impression that he would be the director. For a while, Beatty could not find a director (he did not know or chose not to know of Tobacks desire to direct the film). Beatty feared that he would be stuck in the position of having to direct the film himself. He said, "Im in just about every scene of the picture, and I didnt want to have to do all that other work." However, Beatty announced to Toback that Barry Levinson was on board to direct Bugsy. At first, Toback was disappointed, but he quickly learned that Levinson was the right person for the job. Despite the length of the script (which would have run three and a half to four hours), Beatty, Levinson and Toback condensed it down to a two and a half to three hour structure script. The trio worked very closely together during the production of the film.

During casting, Beatty wanted Annette Bening to play the role of Virginia Hill. Before Bugsy, Bening was a candidate to play Tess Trueheart in Beattys Dick Tracy. After seeing her audition, Beatty phoned Levinson and told him, "Shes terrific. I love her. Im going to marry her". Levinson thought Beatty was just excited at her audition and did not think that Beatty actually meant what he said. Both Beatty and Bening stated that their relationship started after completing the film. Later that summer, Bening became pregnant with her and Beattys first child, which resulted in tabloid/media frenzy at the time. The child was born January 8, 1992, and the couple married on March 12.

Originally, Beatty played Bugsy with a heavy New York City accent (which can be heard in the trailer). However, both Levinson and Toback thought that the accent was not right, so Beatty dropped the accent (which he thought was "charming") and used his normal voice.

Principal photography began in January 1991 and filming wrapped in May 1991. Portions of the film were shot in the Coachella Valley, California.

Bugsy had a limited released on December 12, 1991, and was released nationwide on Christmas Day. The film was critically praised and did well at the box office.

Bugsy received very positive reviews from critics. It currently has an 85% "Fresh" rating on Rotten Tomatoes based on 59 reviews.

The film shows Siegel closing the Flamingo on Christmas of 1946 for improvements and being murdered that night alone at Virginia Hills house. While Siegel did close the hotel that day, his murder took place six months later in June 1947. Furthermore, he was with associate Allen Smiley.

The film also completely ignores the role of William Wilkerson (The Man Who Built Las Vegas) in the building of the Flamingo; Siegel is shown gazing over an empty desert and deciding to build the Flamingo, but the hotel was conceived and constructed wholly by Wilkerson — Siegel only became involved as it neared completion (Wilkerson owned 48% of the Flamingo until he sold out much later).