•  April dreamed of becoming a ballerina when she was a child. Growing up, she took ballet lessons and even studied it at Moorpark College.
•  She also studied Marine Biology and French in college, and it wasn't until her later years in college when she decided to enter show business.
•  She started out as a model before delving into acting.
•  She received acting lessons from Ivana Chubbuck, who also coached other celebrities like Brad Pitt, Beyoncé, and Halle Berry.
•  She guest-starred on two popular TV series, The Big Bang Theory and How I Met Your Mother.
•  She married the American filmmaker Matthew Cooke in December 2020.
•  She appeared with her husband in a Youtube video in which they inform people how to prepare for an earthquake.
•  Some of her hobbies include berry gathering, jam making, boxing, and riding bicycles.
•  She enjoys reading and has started a podcast called 75 Reads with fellow actress Jo Bozarth in 2018. On it, she shares her thoughts on the books on David Bowie's reading list.
•  She keeps moderately active Instagram and Twitter accounts, both with the handle @aprilthebowlby. There, she posts about her work and shows some glimpses into her day-to-day life.

No exact information is available regarding her parents or siblings apart from the fact that her parents were Native American. There were some vague rumors about her marriage as well, Bowlby is married to the American filmmaker Matthew Cooke and do not have children.

Bowlby was romantically involved with an American singer, actor, songwriter, and record producer named Josh Groban. As per the latest reports available, April started dating Josh on November 2009. However, their relationship could not last long, and they got separated after a short dating period of five months in March 2010. April has not revealed anything about her present relationship status, even though she shares her pictures with many men online.

Bowlby was born in Vallejo, California. She moved to Manteca, California, as a child, and attended East Union High School. She studied ballet, French, and marine biology at Moorpark College, and began a modelling career before deciding to pursue acting. She studied drama with Ivana Chubbuck.

Does April Bowlby went under the knife or not ?

It's essential for Hollywood stars and celebrities to maintain their looks to stay in the limelight. And now, with how rampant plastic surgery is, most of them go under the knife for the sake of staying young and beautiful.

While no concrete proof has yet to be found, April Bowlby seems to have undergone some minor and major procedures. Fans couldn't help but notice that she looked a touch different from her former self when some fresh photos emerged in 2020.

Her face appeared smooth and practically free of any signs of fine lines and wrinkles. This led people to believe she's had some botox or filler injections when considering the fact that she passed her 40th birthday.

Some allegations about a nose job were also made. The Celebrity Post magazine conducted a poll where 82% of voters believed April got some work done. Several people thought her nose looked more defined, which led to a change in her side profile and overall facial appearance.

However, all these speculations and claims could be due to makeup techniques, certain lighting, and even airbrushing/photoshop. So, until a statement is forthcoming from the actress, nothing is conclusive.

Bowlby secured the role of Kandi on the television series Two and a Half Men within months of her first-ever auditions. She is also known for her role as Stacy Barrett in Drop Dead Diva. She played Barney Stinson's obsessive ex-girlfriend Meg in How I Met Your Mother, and has made appearances in CSI, Psych, and CSI: NY. She has appeared in films such as All Roads Lead Home (2008), The Slammin' Salmon (2009), and From Prada to Nada (2011).

Kandi Two and a Half Men

The American situational comedy series “Two and a Half Men”, revolves around two brothers Charlie and Alan Harper. April Bowlby is portrayed as Kandi Harper in the series who is the second ex-wife of Alan Harper. Kandi Harper first appears in the series as Charlie Harper's gorgeous but silly girlfriend. However, Charlie broke up with her to date Mia.

Even though Kandi and Alan were having a superficial relationship which was based mostly on sex, they eventually got married in Las Vegas. The couple also won half a million dollars. After just four months of marriage, they finished spending all their money. Kandi kicked Alan out of their condominium as he was not ready to have another child with her.

Kandi seduces Judith's lawyer (Judith was Alan’s first wife) and manages to get hefty alimony from Alan even though she was married to him only for four months. This made Alan poor and dependent on Charlie. In the meanwhile, Kandi secures a role on a CSI-type TV series named "Stiffs" as a forensics expert.

Soon after, Alan reconsiders his decision about another child with Kandi and agrees to the same. However, before she could conceive, Kandi signs the divorce papers. She did this to ensure that Alan will not get any share of her newly found television money. She then disappears from Alan's life. In the tenth season, Kandi reappears as a television star and attempts to win Alan back. However, Alan rejects her as he is in a relationship with a girl named Lyndsey.

In the concluding episode, Kandi has turned in to a celebrity, and we could see Alan calling her on the phone to reveal that she was the love of his life. It seems Kandi is the only woman who is genuinely touched by Alan’s words. She might have been the single woman who loved Alan in real.

Doom Patrol is an American TV series based on the DC Comics superhero team of the same name. The web series was premiered on DC Universe on February 15, 2019. April Bowlby was portrayed as Rita Farr (Elasti-Girl), who was an Olympic swimming gold medalist turned Hollywood actress who later becomes Elasti-Girl, a member of the Doom Patrol.

Once while shooting for a film in Africa, Rita was exposed to unusual volcanic gases. When she recovered from the accident, she discovered that she possessed an extraordinary power to expand, shrink, and grow her body at will. She could change her body from mere inches in height to hundreds of feet tall. She could even enlarge one limb at a time.

Initially, Rita had no control over her size as it changes, and is considered as a menace, and becomes a loner, which also ruins her Hollywood career. However, when Rita is approached by The Chief (Dr. Niles Caulder) who offers her a place among similar "freaks" who uses their powers for good, she joins his team, Doom Patrol as Elasti-Girl.

Meg in How I Met Your Mother

How I Met Your Mother is perhaps one of the most widely accepted sitcom in TV history. It stood out amid other sitcoms for its unique writing style. It shows a father named Ted who is explaining to his children how he and their mother met. In the show, Barney plays the role of a womanizer who uses many tricks to get women laid.

April Bowlby plays the role of Meg or "Crazy Meg," as she is sometimes called, who is one of Barney's One nightstands on the show. As the story progresses, Ted, who plays the role of the father in the film, keep us guessing who the mother of the children is by dating many women. Each time Ted had a fling with someone, the viewers keep wondering if she was the one.

Meg or “Crazy Meg” only had a one-night stand with Barney but yet she becomes very clingy towards him after it. When Lily, a kinder garden teacher who is a common friend of Ted and Barney tells Meg that Barney has plans to propose to her. The plan fails, and Meg finally walks away with an actor who she had been stalking for long.

The Big Bang Theory is an American television series created by Bill Prady and Chuck Lorre. The show was premiered on CBS. Bernadette has a high-paying job as a microbiologist at a pharmaceuticals company and is married to Howard with whom she has two children, Halley and Neil Michael. April Bowlby appeared as a guest star named Rebecca in the Season 10, Episode 21 of the series titled “The Separation Agitation” which was aired on April 13, 2017.

In this episode, we find Bernadette and Howard struggling to leave their child Halley in daycare when Bernadette had to go back to work after her maternity leave. In the meantime, when their friend Bert introduces the couple to his new girlfriend, Rebecca (April Bowlby) they question her motives. They feared that Rebecca was with Bert only for his money. Even though they helped Bert to see Rebecca’s true colors, he was so lonely that he decides to stay with her as he felt that it was better to have someone’s company rather than being alone.

The Engagement clause (Married by Christmas)

The engagement clause (Original title Married by Christmas) is a TV movie directed by Letia Clouston which aired on the UP television network on November 6, 2016. The plot of the film revolves around a high-level executive, Carrie Tate, who must find herself a husband ahead of Christmas to receive her grandmother's fortune. Carrie was very serious about their family business and dedicated her whole life to it, and she wants to continue working for the company.

April Bowlby plays the role of Carrie’s sister Katie Tate in the film, who is a pleasure-seeking food-to-table person and is marrying her boyfriend on Christmas Eve. According to their grandmother's will, whoever marries first will inherit the company. This puts Carrie in a difficult situation with no other option than to marry someone before her sister gets married.

Slammin' Salmon is a 2009 comedy film which tells the story of a restaurant owner who conducts a contest to see who among his waiters can make the most money in a single night. He decides to give a cash prize of $10,000 to the winner of the contest. At the same time, the loser of the competition will receive a "beat down" by the owner, Cleon Salmon, who is a former heavyweight champion. In the film, April Bowlby plays the role of Mia, who is an aspiring ballet dancer, and a flirtatious, stubborn, and childish waitress.

She was also Connor Rhodes’ old flame who was an unsuccessful actor who ends up working for the same restaurant as a waiter. 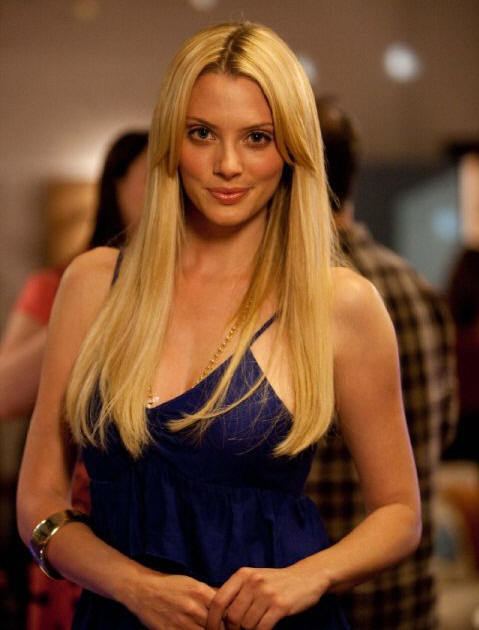 Where is She Now ?

In the past, April Bowlby fell victim to some internet websites and pages which spread false rumors of her death. However, it was later found out to be just a hoax. In reality, she is alive and actively developing her acting skills. However, there is no exact information regarding her whereabouts as she prefers to keep it private.

April Bowlby’s net worth is estimated to be $2 million.