Chinnaswami Subramania Bharathi (11 December 1882 – 11 September 1921) was an Indian writer, poet, journalist, Indian independence activist and social reformer from Tamil Nadu. Popularly known as "Mahakavi Bharathi", he was a pioneer of modern Tamil poetry and is considered one of the greatest Tamil literary figures of all time. His numerous works were fiery songs kindling patriotism and nationalism during the Indian independence movement. 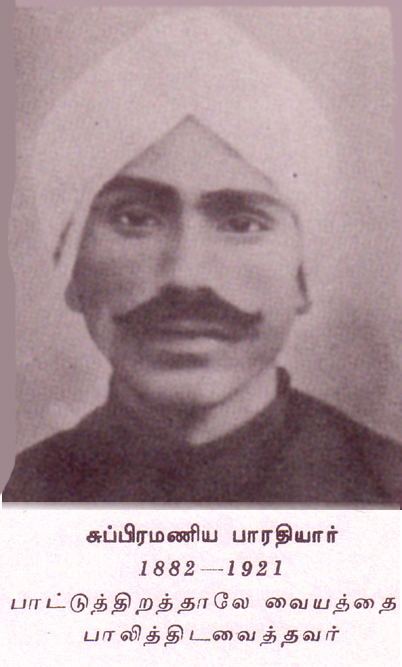 Born in Ettayapuram of the then Tirunelveli district (present day Thoothukudi) in 1882, Bharathi had his early education in Tirunelveli and Varanasi and worked as a journalist with many newspapers, notable among them being the Swadesamitran and India. Bharathi was also an active member of the Indian National Congress. In 1908, an arrest warrant was issued against Bharathi by the government of India for his revolutionary activities, forcing him to flee to Puducherry, where he lived until 1918.

Bharathi was born to Chinnasami Subramanya Iyer and Lakhsmiammaal as Subbayya on 11 December 1882 in the village of Ettayapuram. He was educated at a local high school called The M.D.T. Hindu College in Tirunelveli. From a very young age he learnt music and at eleven, he learnt poetry. It was during this time that he was conferred the title of "Bharathi", the one blessed by Saraswati, the goddess of learning. Bharati lost his mother at the age of five and his father at the age of sixteen. He married Chellama who was seven years old when he was fourteen years old. He was brought up by his father who wanted him to learn English, excel in arithmetic, and become an engineer. Through his great efforts he learnt 32 languages (29 Indian languages and 3 foreign languages).

During his stay in Varanasi, Bharati was exposed to Hindu spirituality and nationalism. This broadened his outlook and he learned Sanskrit, Hindi and English. In addition, he changed his outward appearance. He also grew a beard and wore a turban. Though he passed an entrance exam for a job, he returned to Ettayapuram during 1901 and started as the court poet of Raja of Ettayapuram for a couple of years. He was a Tamil teacher from August to November 1904 in Sethupathy High School in Madurai. During this period, Bharati understood the need to be well-informed of the world outside and took interest in the world of journalism and the print media of the West. Bharati joined as Assistant Editor of the Swadeshamitran, a Tamil daily in 1904. In December 1905, he attended the All India Congress session held in Benaras. On his journey back home, he met Sister Nivedita, Swami Vivekananda's spiritual heir. She inspired Bharati to recognise the privileges of women and the emancipation of women exercised Bharati's mind. He visualised the new woman as an emanation of Shakti, a willing helpmate of man to build a new earth through co-operative endeavour. He considered Nivedita as his Guru and penned a couple of lyrics praising her. He attended the Indian National Congress session in Calcutta under Dadabhai Naoiroji, which demanded Swaraj and boycott of British goods.

By April 1907, he started editing the Tamil weekly India and the English newspaper Bala Bharatham with M.P.T. Acharya. These newspapers were also a means of expressing Bharati's creativity, which began to peak during this period. Bharati started to publish his poems regularly in these editions. From hymns to nationalistic writings, from contemplations on the relationship between God and Man to songs on the Russian and French revolutions, Bharati's subjects were diverse.

Bharati participated in the historic Surat Congress in 1907 along with V.O. Chidambaram Pillai and Mandayam Srinivachariar, which deepened the divisions within the Indian National Congress between the militant wing led by Tilak and Aurobindo and the moderate wing. Bharati supported Tilak and Aurobindo together with V. O. Chidambaram Pillai and Kanchi Varathaachariyar. Tilak openly supported armed resistance against the British.

In 1908, he gave evidence in the case which had been instituted by the British against V.O. Chidambaram Pillai. In the same year, the proprietor of the journal India was arrested in Madras. Faced with the prospect of arrest, Bharati escaped to Pondicherry which was under French rule. From there he edited and published the weekly journal India, Vijaya, a Tamil daily, Bala Bharatha, an English monthly, and Suryothayam, a local weekly in Pondicherry. The British tried to suppress Bharati's output by stopping remittances and letters to the papers. Both India and Vijaya were banned in India in 1909.

During his exile, Bharati had the opportunity to meet many other leaders of the revolutionary wing of the Independence movement like Aurobindo, Lajpat Rai and V.V.S. Aiyar, who had also sought asylum under the French. Bharati assisted Aurobindo in the Arya journal and later Karma Yogi in Pondicherry. This was also the period when he started learning Vedic literature. Three of his greatest works namely, Kuyil Pattu, Panchali Sabatham and Kannan Pattu were composed during 1912. He also translated Vedic hymns, Patanjali's Yoga Sutra and Bhagavat Gita to Tamil. Bharati entered India near Cuddalore in November 1918 and was promptly arrested. He was imprisoned in the Central prison in Cuddalore in custody for three weeks from 20 November to 14 December and was released after the intervention of Annie Besant and C.P. Ramaswamy Aiyar. He was stricken by poverty during this period, resulting in his ill health. The following year, 1919, Bharati met Mohandas Karamchand Gandhi. He resumed editing Swadesimeitran from 1920 in Madras (modern day Chennai).

He was badly affected by the imprisonments and by 1920, when a General Amnesty Order finally removed restrictions on his movements, Bharati was already struggling. He was struck by an elephant named Lavanya at Parthasarathy temple, Triplicane, Chennai, whom he used to feed regularly. Although he survived the incident, a few months later his health deteriorated and he died on 12 September 1921 early morning around 1 am. Though Bharati was considered a people's poet, a great nationalist, outstanding freedom fighter and social visionary, it was recorded that there were only 14 people to attend his funeral. He delivered his last speech at Karungalpalayam Library in Erode, which was about the topic Man is Immortal. The last years of his life were spent in a house in Triplicane, Chennai. The house was bought and renovated by the Government of Tamil Nadu in 1993 and named Bharati Illam (Home of Bharati).

Bharati is considered as one of the pioneers of modern Tamil literature. Bharati used simple words and rhythms, unlike his previous century works in Tamil, which had complex vocabulary. He also employed novel ideas and techniques in his devotional poems. He used a metre called Nondi Chindu in most of his works, which was earlier used by Gopalakrisha Bharathiyar.

Bharati's poetry expressed a progressive, reformist ideal. His imagery and the vigour of his verse were a forerunner to modern Tamil poetry in different aspects. He was the forerunner of a forceful kind of poetry that combined classical and contemporary elements. He had a prodigious output penning thousands of verses on diverse topics like Indian Nationalism, love songs, children's songs, songs of nature, glory of the Tamil language, and odes to prominent freedom fighters of India like Tilak, Gandhi and Lajpat Rai. He even penned an ode to New Russia and Belgium. His poetry not only includes works on Hindu deities like Shakti, Kali, Vinayagar, Murugan, Sivan, Kannan(Krishna), but also on other religious gods like Allah and Jesus. His insightful similies have been read by millions of Tamil readers. He was well-versed in various languages and translated speeches of Indian National reform leaders like Aurabindo, Bala Gangadar Tilak and Swami Vivekananda.

He describes the dance of Shakthi in the following lines:

In Bharathiyaar's Panchali sapatham, he compares Panchaali (Draupadi) with Bharata matha, the Paandavas with the Indians, the Kauravas with the British and the Kurukshetra war of Mahabharat to that of the Indian freedom struggle. He visualised Draupadi to India and Indian women, who were held by slavery and social clutches of the society.

He is known to have said, "Even if Indians are divided, they are children of one Mother, where is the need for foreigners to interfere?" In the period 1910–1920, he wrote about a new and free India where there are no castes. He talks of building up India's defense, her ships sailing the high seas, success in manufacturing and universal education. He calls for sharing amongst states with wonderful imagery like the diversion of excess water of the Bengal delta to needy regions and a bridge to Sri Lanka.

Bharati is considered the first to have advocated and campaigned for women's participation in politics. He advocated greater rights for women and their education. He visualised a modern Indian woman at the vanguard of society. He was of the strong opinion that the world will prosper in knowledge and intellect if both men and women are deemed equal. He condemned the Shashtras, the procedures formulated by some orthodox Hindus and weren't held as holy by most Hindus, that suppressed women's rights. Most of his views are considered contemporary even in modern times.

Bharati also fought against the caste system in Hindu society. Although born into an orthodox Brahmin family, he gave up his own caste identity. He considered all living beings as equal and to illustrate this he performed the upanayanam for a young Dalit man and made him a Brahmin. He also scorned the divisive tendencies being imparted into the younger generations by their elderly tutors during his time. He openly criticised the preachers for mixing their individual thoughts while teaching the Vedas and the Gita. He strongly advocated bringing the Dalits to The Hindu mainstream.

Bharathiar University, a state university named after the poet, was established in 1982 at Coimbatore. There is a statue of Bharatiar at Marina Beach and also in the Indian Parliament. A Tamil Movie titled Bharathi was made in the year 2000 on the life of the poet by Gnana Rajasekeran, which won National Film Award for Best Feature Film in Tamil. The movie Kappalottiya Thamizhan chronicles the important struggles of V.O.Chidambaranar along with Subramanya Siva and Bharathiar with S.V Subbiah starring as Subramania Bharati.

Many roads are named after him, notable ones including Bharathiar road in Coimbatore and Subramaniam Bharti Marg in New Delhi. The NGO Sevalaya runs the Mahakavi Bharathiya Higher Secondary School. In March 2013, SS Music and Ayngaran International noted British singer Adele's song "Skyfall"'s similarities to Bharati's poem Achamillai Achamillai, which contains the lyrics "Uchchi Meedhu Vaan Idindhu Veezhugindra Podhinum, Achcham Illai Achcham Illai Achcham Enbadhillaiyae", which loosely translate "Skyfall"'s lyrics, "Let the sky fall, when it crumbles, we will stand tall and face it all together."