Pepe Romero (born March 8, 1944, in Malaga, Spain) is a world-renowned classical and flamenco guitarist. He is particularly famous for his outstanding technique and colorful musical interpretations on the instrument. 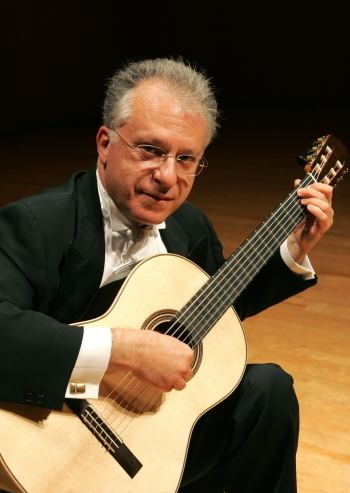 Since his first recording (at the age of 15) he has recorded over 50 solo albums and 30 albums as part of the famed guitar quartet The Romeros. He has played for Presidents Carter and Nixon, the Queen of the Netherlands, the Prince of Wales and Pope John Paul II. He has numerous international recording awards to his credit and has received an Honorary Doctorate in Music from the University of Victoria.

His contributions to the field of classical guitar have inspired a number of distinguished composers to write works specifically for him, including Joaquin Rodrigo, Federico Moreno Torroba, Francisco de Madina, Lorenzo Palomo, Michael Zearott, Enrique Diemecke, and Celedonio Romero.

Pepe Romero is the second son of Celedonio Romero, who was his only guitar teacher. His first professional appearance was in a shared concert with his father when Pepe was only seven years old. In 1957 Celedonio Romero left Franco's Spain for the United States with his family.

On February 11, 2000, King Juan Carlos I of Spain knighted Pepe Romero and his brothers, Celin and Angel, into the Order of Isabella the Catholic. The official ceremony of this high honor took place at the USC Thornton School of Music, and included a gala performance by The Romeros with the Thornton Chamber Orchestra. He is currently Adjunct Professor of Classical Guitar at the Thornton School, where he was named "Distinguished Artist in Residence" in 2004.

Although originally a classical guitarist, he is talented in flamenco and a popular flamenco performer. His most famous flamenco-only album is called ¡Flamenco Fenomeno!