Bittersweet film about a supply officer aboard a decrepit cargo ship during World War II who yearns for a transfer into a combat zone but is thwarted by the ships captain, a petty tyrant. Forced to endure various humiliations in exchange for privileges, the crew engage in minor acts of resistance, and look to Mr. Roberts for inspiration and moral support. Based on the hit Broadway play. 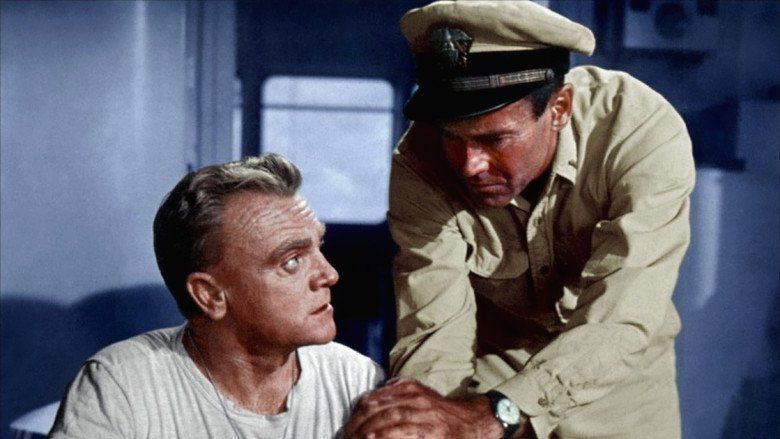 Mister Roberts is a 1955 American CinemaScope comedy-drama film directed by John Ford and Mervyn LeRoy, and starring Henry Fonda as Mister Roberts, James Cagney as Captain Morton, William Powell (in his final film appearance) as Doc, and Jack Lemmon as Ensign Pulver. Based on the 1946 novel and 1948 Broadway play, the film was nominated for the Best Picture and Best Sound, Recording (William A. Mueller) Oscars; Jack Lemmon received the 1955 Academy Award for Best Supporting Actor. 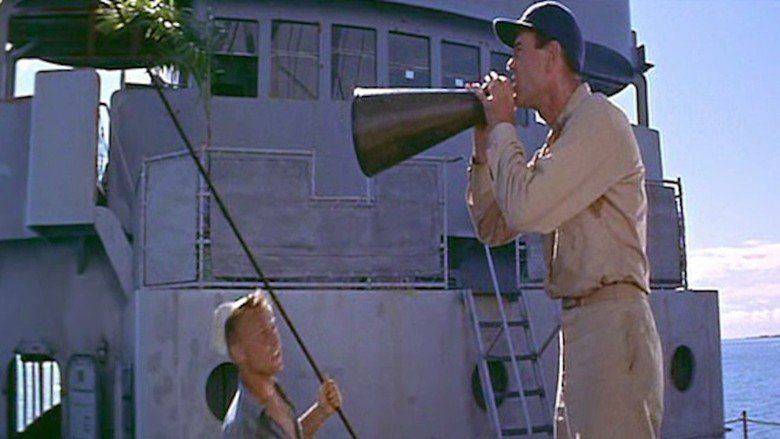 A hilarious and heartfelt military comedy-drama co-directed by John Ford and Mervyn LeRoy, Mister Roberts stars Henry Fonda as an officer who's yearning for battle but is stuck in the backwaters of World War II on a noncommissioned Navy ship run by the bullying Capt. Morton (James Cagney). Jack Lemmon enjoys a star-making turn as the freewheeling Ensign Pulver, and William Powell stars as the ship's doctor in his last screen role. Based on the 1946 novel with the same name, by Thomas Heggen, and the 1948 Broadway play, written by Thomas Heggen and Joshua Logan. Henry Fonda also starred in the original Broadway production. Warner Bros. didn't want Fonda to star in the film, as they thought he was too old, and had been a stage player for so long (8 years), that he no longer was box office material. However, John Ford insisted on Fonda and the company eventually agreed. 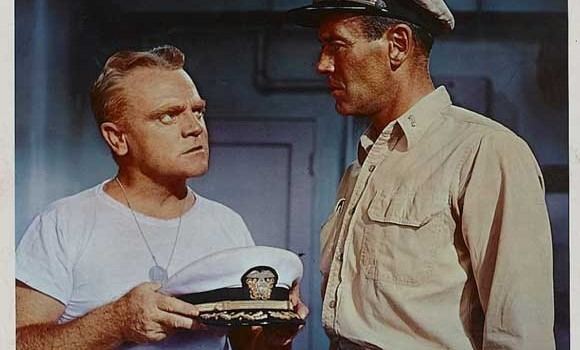 The film takes place in the waning days of World War II on the United States Navy cargo ship Reluctant, in the rear areas of the Pacific theater of operations in World War II. The Reluctant is as far from the action as possible while still being in the war. The unpopular captain, Lieutenant Commander Morton (James Cagney), is proud of his spotless cargo record. His executive officer/cargo chief, Lieutenant Junior Grade Douglas A. "Doug" Roberts (Henry Fonda), tries to shield the dispirited crew from Mortons draconian rule.

Eager to join the fighting, Roberts repeatedly requests a transfer. Morton is forced by regulation to forward his requests, but refuses to endorse them, which means they are always rejected. 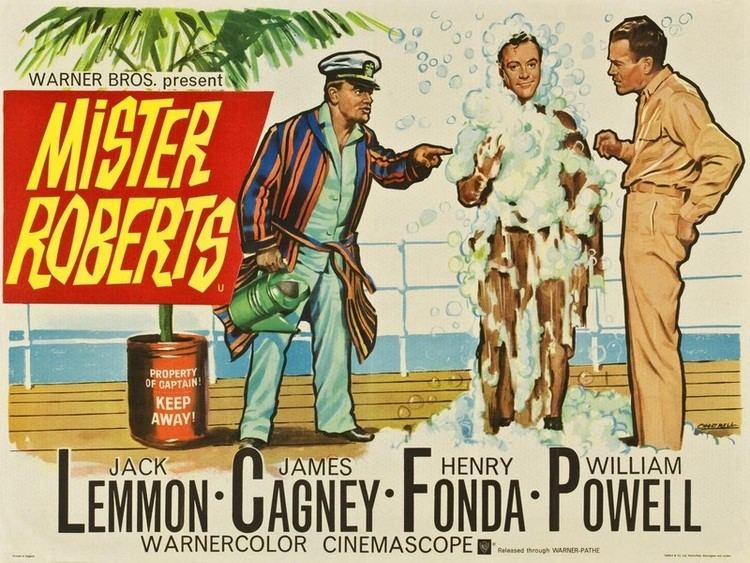 Roberts shares quarters with Ensign Frank Thurlowe Pulver (Jack Lemmon). Pulver spends most of his time idling in his bunk and avoids the captain at all costs, so much so that Morton even forgets that Pulver is part of the crew. 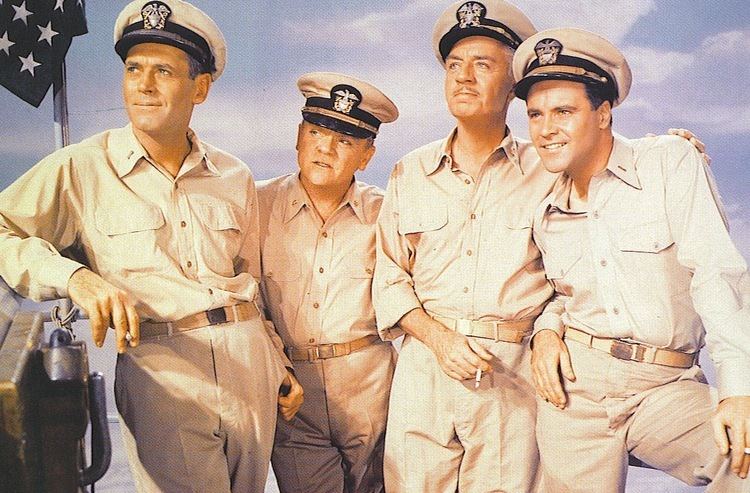 Roberts surreptitiously requests crew liberty from one of Morton’s superiors. It is granted, but when the ship reaches an idyllic South Pacific island, Morton denies the crew their much-needed shore leave. In private, Morton tells Roberts that the crew will not get liberty as long as he continues to request transfer and writes letters regarding disharmony aboard, which could endanger Mortons career. Finally, Morton agrees to grant the crew liberty on condition that Roberts never requests another transfer, no longer bends Mortons rules, and never reveals what made him change his attitude. Roberts reluctantly sacrifices his dreams.

While on liberty, the crew lets loose after months of pent up frustration. Many crewmen are arrested and hauled back to the ship by the military police and the shore patrol. The next morning, Morton is reprimanded by the port admiral and ordered to leave port immediately. Morton is irate about the black mark on his sterling record.

Meanwhile, the crewmen are mystified by Robertss new strictness. Morton deceives them into thinking that Roberts is trying to get a promotion. When a crew member informs Roberts of a new Navy policy which might assist him in getting a transfer despite the captains opposition, Roberts refuses to take advantage of it.

News of the Allied victory in Europe depresses Roberts further, knowing the war may end soon without his ever seeing combat. Inspired by a patriotic radio speech celebrating VE Day, Roberts throws Morton’s prized palm tree overboard. The captain demands the identity of the culprit, but no one steps forward. He eventually realizes that Roberts is the only person aboard with the nerve to do it. Morton summons him to his quarters and accuses him of the deed. An open microphone reveals to the crew what changed Roberts.

Weeks later, Roberts receives an unexpected transfer. "Doc" (William Powell), the ships doctor and Roberts friend, confides to him that the crew risked court-martial by submitting a transfer request with Mortons forged imprimatur. Before he leaves, the crew presents Roberts with a handmade medal, the Order of the Palm, for "action against the enemy".

Several weeks later, Pulver, who has been appointed cargo officer, receives a couple of letters. The first is from Roberts, who speaks enthusiastically about his new assignment aboard the destroyer USS Livingston during the Battle of Okinawa. He goes on to say that he would rather have the Order of the Palm than the Congressional Medal of Honor. The second letter is from a college classmate of Pulvers who is also assigned to the Livingston. The letter from Pulvers classmate reveals that Roberts had been killed in a Japanese kamikaze attack on the Livingston shortly after the first letter had been posted.

Incensed, Pulver marches across the deck, up a ladder to the ships bridge, and throws the captain’s replacement palm tree overboard. He then marches into Mortons cabin, openly bragging about it and brazenly demanding to know why Morton has cancelled the showing of a film that night. Morton slowly shakes his head, realizing that his problems havent gone away.

Fonda was not the original choice to star in the film version; Warner Bros. was considering William Holden or Marlon Brando for the lead role. The studio thought Fonda had been on stage and off the screen so long (8 years) that he was no longer a movie box office draw. In addition, when filming began he was 49, much older than the average lieutenant junior grade. Fonda was only hired because director John Ford insisted.

The movie was directed by John Ford, Mervyn LeRoy and Joshua Logan who was uncredited. While directing the film, Ford had personality conflicts with actors Henry Fonda and James Cagney. When Ford met Cagney at the airport, the director warned that they would "tangle asses," which caught Cagney by surprise. Cagney later said: "I would have kicked his brains out. He was so goddamned mean to everybody. He was truly a nasty old man." The next day, Cagney was slightly late on set, and Ford became incensed. Cagney cut short the imminent tirade, saying: "When I started this picture, you said that we would tangle asses before this was over. Im ready now – are you?" Ford backed down and walked away and he and Cagney had no further conflicts on the set.

Nevertheless, Ford was replaced by LeRoy after difficulties with Fonda (Ford apparently punched Fonda in the jaw during a heated argument), and a gall bladder attack that necessitated emergency surgery. It has been widely speculated which scenes were directed by LeRoy. Jack Lemmon shed some light on this issue in his DVD commentary: "Mervyn LeRoy would watch all of the rushes that Ford had shot prior to his temporary departure and decided to shoot them the way John Ford would have shot em." Logan, who had directed the original stage production in which Fonda starred, re-shot major portions of the film, at Fondas request.

The DVD release of this film includes an audio commentary by Lemmon in which he recounts stories of his experience making the film and his views on acting. During the production of the film, Lemmon started a long-time friendship with Cagney which lasted until Cagneys death in 1986. Prior to his appearance in his first film, years before Mister Roberts, he started in live television. In one particular performance, Lemmon decided to play his character differently. He decided to play the character left-handed, which is opposite to his own way of movement. With much practice, he pulled off the performance without anyone noticing the change. This change even fooled Lemmons wife at the time. A few years went by and Jack met Cagney on their way to Midway Island to film Mister Roberts. They introduced themselves, and Cagney chimed in, "Are you still fooling people into believing youre left handed?" They had a great laugh and a strong friendship was born.

Henry Fonda wrote in his 1982 autobiography, My Life, that he believed that as good as the movie is, the play is even better. The film was William Powells last movie, although he died decades later in 1984. It was also James Cagneys last movie for Warner Brothers, the studio that had propelled him to stardom 25 years before and the studio to which he had spent the majority of his career under contract.

The Navy vessel that played the role of USS Reluctant (AK-601), "the Bucket," in the movies exterior shots was a former U.S.Army Freight and Passenger/Freight and Supply (FP/FS) vessel, some of which were commissioned in the Navy following World War II. The USS Hewell (AG-145) is credited by the Navy as the ship assigned to the filming. The official Navy history for the ship notes:

In late August 1954 Hewell departed Hawaii for Midway Island, mooring at the Naval Base there on 28 August to help film the Warner Brothers movie Mister Roberts. The film, starring Henry Fonda, James Cagney, William Powell and Jack Lemmon, was partially shot on board Hewell, with underway footage filmed off Midway Harbor between 1 and 16 September. The light cargo ship then sailed back to Hawaii between 24 and 29 September and additional film was shot off Kaneohe Bay between 30 September and 7 October.

A 1994 article which appeared in the newsletter of the Keyport, Washington Naval Undersea Warfare Center, contending that IX-308 (another Army FS vessel converted to a Navy AKL and assigned torpedo recovery duties at Keyport) was used in filming of Mister Roberts and not Hewell, created a controversy . That ship had been named USNS New Bedford for its service out of that port serving the USAF Texas Towers.

All but one of the Navys AKLs were built as U.S. Army FP/FS type cargo vessels transferred to the Navy. As it was, an AKL carried a much smaller crew than the USS Virgo (AKA-20) and USS Rotanin (AK-108), both of which Thomas Heggen served on during the war. In the movie, Mr. Roberts says to Doc that there are "62 men" aboard which would have been far too many for an AKL.

A number of modifications to the AKL exterior appearance were made for the film. The "palm tree" was located on a "deck" built for the movie by extending the small deckhouse of the AKL and building movie set ladders to the bridge and main deck. The crew, when going below to their berthing compartment, are shown in the movie to be descending into the cargo hold.

Mister Roberts was followed by a film sequel, Ensign Pulver (1964), with Robert Walker, Jr. taking over the Lemmon role. It also starred Burl Ives as Captain Morton, Walter Matthau, Larry Hagman, and Jack Nicholson. Much of the screenplay was derived from Heggens original book.

The original film was the basis of the 1965 TV series Mister Roberts, remade for television in 1984 as a live telecast.