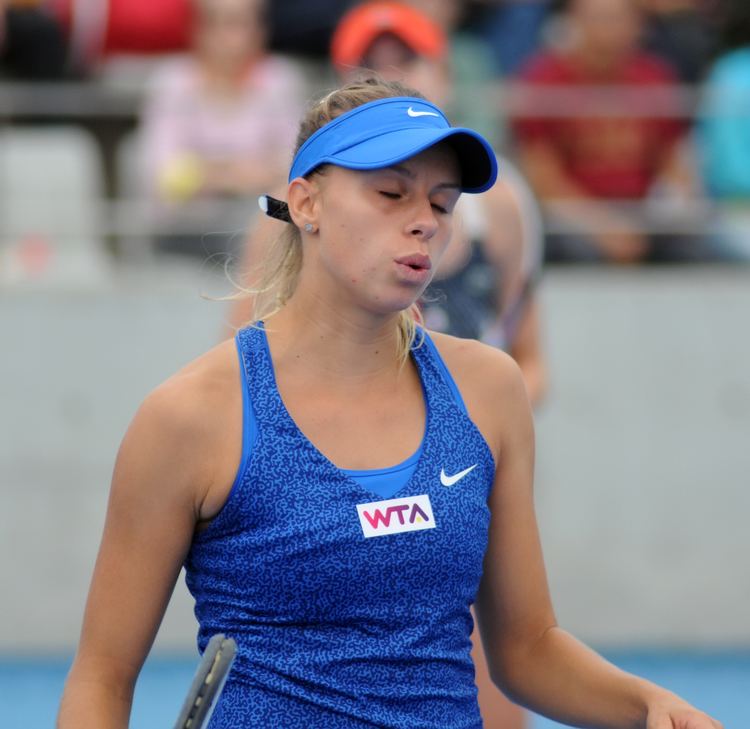 She made her first appearance in a WTA main draw at the Internationaux de Strasbourg in May 2013, where she also scored her first win at this level. The same year, she reached her first WTA semifinal in Baku, coming from qualifying. 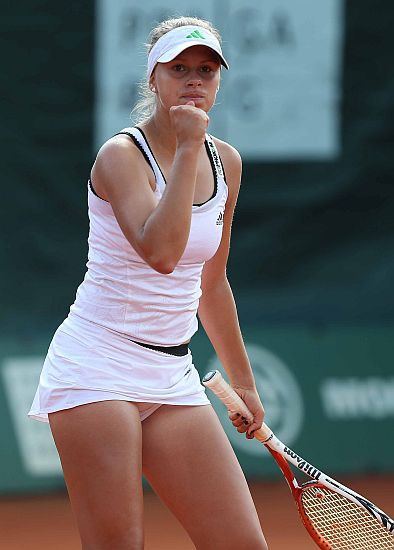 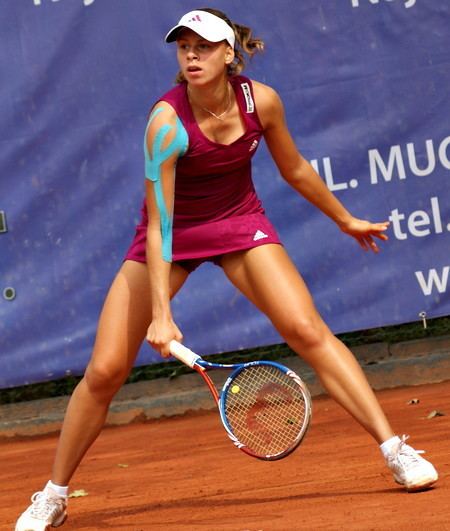 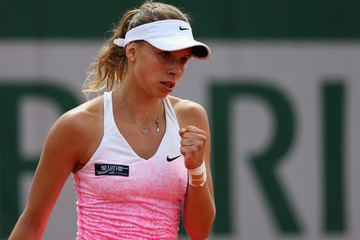 Magda Linette was born to Tomasz and Beata and currently resides in Poznan, Poland. She is a right-handed player and is currently coached by Izudin Zunic. Her favourite tennis surfaces are hard and clay. 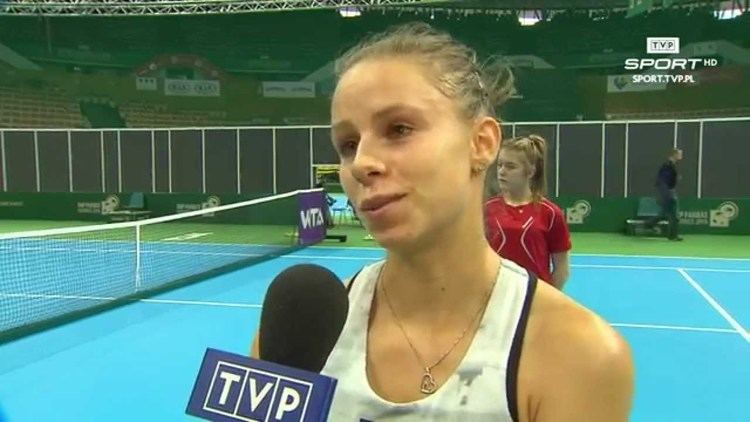 In May, Magda Linette received a wild card to the qualifying draw of Polsat Warsaw Open – part of WTA Premier series. She beat her doubles partner Paula Kania in straight sets but lost to Anna Chakvetadze (4–6 6–4 1–6). In June, she won her first professional tournament in Szczecin as a wild card entrant. In July, she made it to the final of the ITF Torun tournament but lost to top seed Ksenia Pervak from Russia in straight sets.

Magda Linette won another two ITF titles in August, in Hechingen and Versmold, both in Germany. In Hechingen, as a qualifier, she defeated Silvia Soler Espinosa of Spain, while in Versmold she beats Romanian Irina-Camelia Begu in straight sets, 6–2, 7–5.

She continued to play $25,000 ITF tournaments and won her fourth title of the season in Katowice, where she defeated former top 100 player Eva Birnerova (3–6 6–2 6–2). The week after, she reached another final in Zagreb but eventually lost to Renata Voracova in three sets, after 21 consecutive wins on the ITF circuit. After some weeks of rest, she wasn't able to win her first matches in $50,000 ITF tournaments, in Athens and Ismaning; nevertheless she succeeded in reaching the final in Opole, but lost to Sandra Zahlavova (7–5 6–7 4–6).

In early February, Magda Linette played for the first time as a member of Polish team in Fed Cup. She defeated Anne Kremer easily (6–1 6–1), but lost her three other matches, including one against Belarusian and top 100 player Olga Govortsova on an honorable score (6–7 6–7).

In May, for her first appearance in a Grand Slam tournament, she played the qualifying of the French Open and defeated Claire de Gubernatis (6–4 6–3) to reach the second round, where she lost to Mandy Minella.

In September, Linette played in the qualifying tournament of the U.S. Open, losing a three-set match to Russian Valeria Savinykh, 6–7(2), 6–4, 6–2.

After some difficult months despite encouraging debuts on $50,000 and $100,000 ITF tournaments during the summer, Magda Linette surprisingly defeated Sorana Cirstea in the first round of the tournament of Poitiers in October, 3–6 6–4 6–2. The month after, she reached the semifinals of the ITF tournament of Opole in her home country, beating en route top seed Lesia Tsurenko.

Starting the season with several early exits after a notable straight sets win over Monica Puig in Andrezieux-Boutheon, Magda Linette reached her first singles final in over 18 months at the $10,000 event of Florence in May but lost to Anais Laurendon (4–6 4–6). After four first round losses, she finally competed again in a $25,000 final in Kristinehamn a month later after beating Elena Bovina by coming from a set down, but was defeated by Australia's Sacha Jones. In Ystad, she won her very first doubles title pairing up with her friend Katarzyna Piter.

Linette's performances during the summer were quite disappointing, exceeding the first round only once. Her next good run occurred in Dobrich where she finally qualified for the semifinals with victories over Irina Khromacheva and Jasmina Tinjic, losing to Anne Schafer after a final set tie-break. The week after, she entered and won the $10,000 of Prague after beating Katerina Siniakova and Zuzana Luknarova without dropping a set, lifting her fifth singles trophy in career and the first since September 2010.

In October and November, Linette got some of her best wins of the season by beating Eleni Daniilidou in Limoges, Monica Puig again in Nantes and Karolina Pliskova in Equeurdreville, but reached at best the quarterfinals in these tournaments. Nevertheless, she added two more doubles titles to her prize list, including her first $50,000 level trophy in Limoges with compatriot Sandra Zaniewska. In December, she ended her season by winning another tournament in doubles with Katarzyna Piter in Ankara.

In early 2013, Magda Linette hired Izo Zunic as her new coach and started to train in Split.

After a brief warm-up tournament in France in January where she won three matches, Linette spent some weeks in South America to play two WTA tournaments but suffered early losses in both Cali and Acapulco.

Back in Europe in late March, Linette reached the semifinals at the indoor hard tournament of Tallinn, falling to Aliaksandra Sasnovich. Some days later, she beat Valeria Savinykh in the first qualifying round of the BNP Paribas Katowice Open but didn't manage to qualify for the main draw. At the end of the month, Linette entered the $25,000 event of Civitavecchia and reached the singles final by defeating successively Anne Schafer, Arantxa Parra Santonja, Alize Lim and Corinna Dentoni before losing to Anna Karolina Schmiedlova. The week after, she won at $50,000+H Johannesburg her biggest doubles title to date along with Chanel Simmonds.

At mid-May, Magda Linette qualified for the first time for a WTA main draw in Strasbourg, not losing a set in qualifying. She scored her first win at this level against Olga Puchkova and, doing so, her second victory over a top 100 player, advanced to the second round and falling to eventual champion Alize Cornet. Then she had some tougher weeks until mid-July as she reached the quarterfinals only once, in Torun.

Getting through another WTA qualifying draw on the occasion of the Baku Cup, Linette made her second appearance in a main draw at this level. She defeated Julia Cohen, runner-up of the previous edition, then Kristyna Pliskova to reach the quarterfinals where she benefited from a controversial retirement of Ons Jabeur. She lost in her first WTA semifinals to Shahar Pe'er. Thanks to her deep run in Baku, she returned to the top 200 for the first time since August 2011 and got a new career-high in rankings of No.159.

Trying to enter the US Open main draw, she fell in the first qualifying round to Turkey's Cagla Buyukakcay.

After fruitless tournaments in September, Linette started to compete in successive indoor hard events in France and got more success. She reached the semifinals at $50,000 Joue-les-Tours with victories over Valeria Savinykh, Ana Vrljic and Marta Domachowska, only losing to Mirjana Lucic-Baroni. The week after, she won her eighth doubles title, pairing up with Viktorija Golubic. Finally, she competed in her very first $50,000+H singles final in Nantes beating en route Sofia Arvidsson and Claire Feuerstein but falling to in-form player Aliaksandra Sasnovich (6–4 4–6 2–6). This performance made her advance to No.148 in singles.

In November, Magda Linette played the French Team Championships as part of the Stade Clermontois team. She won all of her six matches before returning on the ITF circuit in December to play a $25,000 tournament in Pune, which she won as the top seed.

Linette started the season slowly with a few wins in Australia before falling into a seven match losing streak from January to April, combining WTA and ITF events. She finally reached the quarterfinals at the Malaysian Open in Kuala Lumpur.

Preparing for the French Open, she had mixed results at two European $100,000 tournaments and failed to pass the first qualifying round in Paris where she lost to Ksenia Pervak. She launched her grass season with two ITF tournaments in Great Britain but lost twice to Estonia's Anett Kontaveit in straight sets. She sustained an ankle injury from her first qualifying match at Wimbledon and had to stop playing for a month.

Linette returned to the competition in August but failed again to get through the first qualifying round at the US Open. In September, she flew to Asia to play a serie of WTA events. Winning one match each time in Suzhou, Hong Kong and Guangzhou (losing to Timea Bacsinszky in three sets), she reached in the latter her very first WTA doubles final, partnering Alize Cornet. After two losses in Beijing and Tianjin, she was top seed in a $25,000 event in Goyang and won it.

In late October two weeks later, she entered another WTA 125 tournament in Ningbo, China. Defeating seventh seed Shahar Pe'er and Xu Yifan in the first two rounds, she came back from a 1–6 0–4 deficit to beat second seed Zheng Saisai in the quarterfinals before taking out fellow Pole and friend Paula Kania to qualify for the final. She defeated sixth seed Wang Qiang in the final (3–6, 7–5, 6–1) to win the tournament, the biggest title of her career and her first WTA trophy of any kind until then.

She ended her season with a quarterfinal appearance in the WTA 125 event of Taipei the week after, beating again Wang Qiang but losing to top seed Anna-Lena Friedsam. She reached the 109th position in the WTA singles rankings at the end of November 2014.