Hjalmar Horace Greeley Schacht (22 January 1877 – 3 June 1970) was a German economist, banker, liberal politician, and co-founder in 1918 of the German Democratic Party. He served as the Currency Commissioner and President of the Reichsbank under the Weimar Republic. He was a fierce critic of his country's post-World War I reparation obligations. 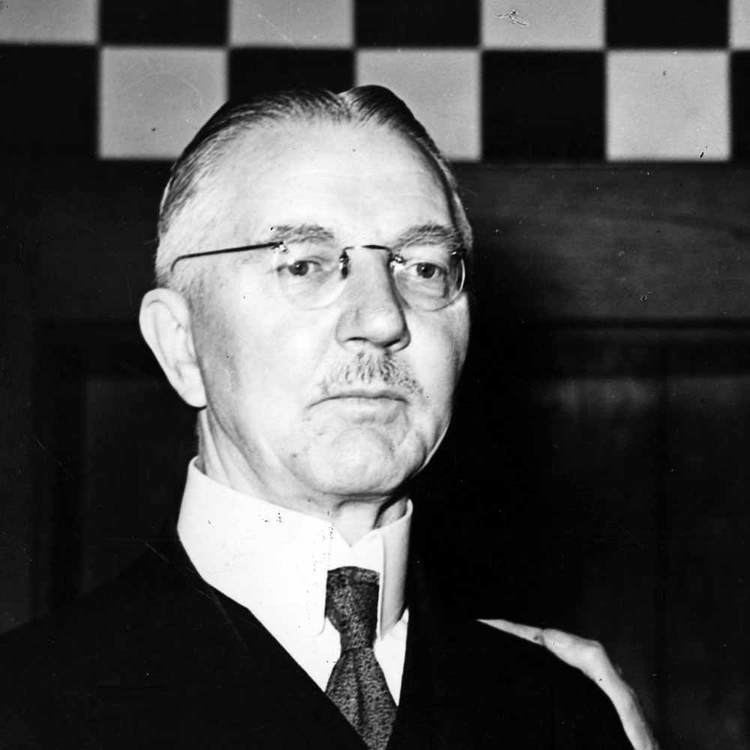 He became a supporter of Adolf Hitler and the Nazi Party, and served in Hitler's government as President of the Reichsbank (1933-1939) and Minister of Economics (August 1934 - November 1937). As such, Schacht played a key role in implementing the policies attributed to Hitler. 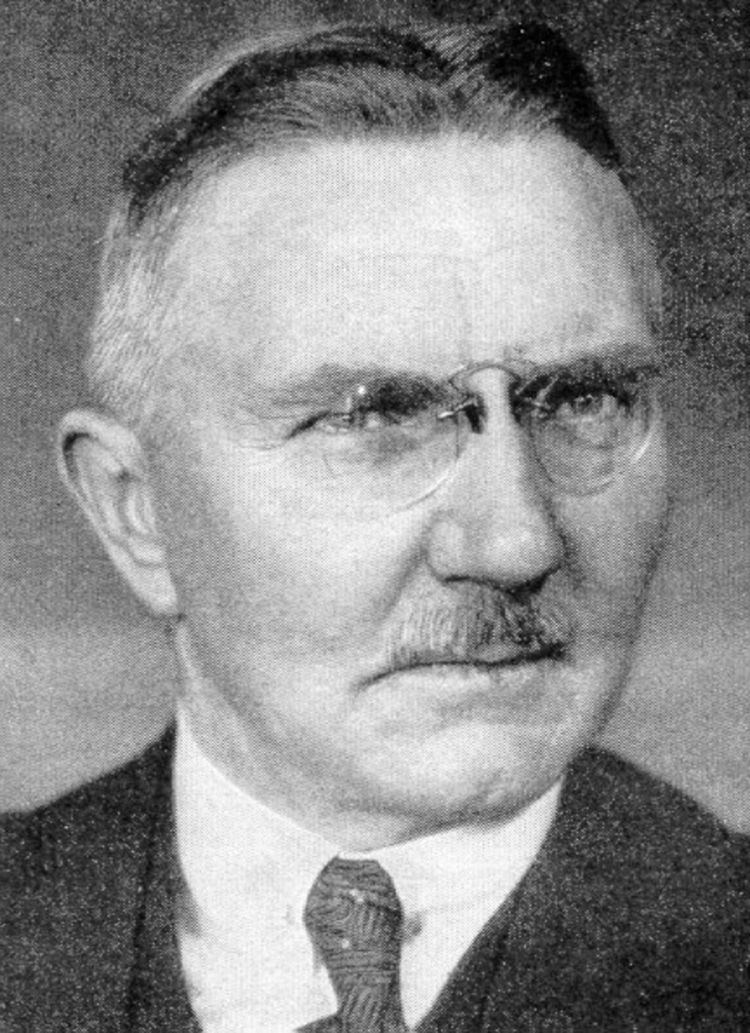 Since he opposed the policy of German re-armament spearheaded by Hitler and other prominent Nazis, Schacht was first sidelined and then forced out of the Third Reich government beginning in December 1937; therefore he had no role during World War II. He became a fringe member of the German Resistance to Hitler and was imprisoned by the Nazis after the 20 July 1944 plot. After the war, he was tried at Nuremberg and acquitted. 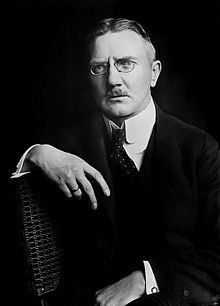 In 1953, he founded a private banking house in Dusseldorf. He also advised developing countries on economic development.

Education and rise to President of the Reichsbank

Schacht was born in Tingleff, Schleswig-Holstein, Prussia, German Empire (now in Denmark) to William Leonhard Ludwig Maximillian Schacht and baroness Constanze Justine Sophie von Eggers, a native of Denmark. His parents, who had spent years in the United States, originally decided on the name Horace Greeley Schacht, in honor of the American journalist Horace Greeley. However, they yielded to the insistence of the Schacht family grandmother, who firmly believed the child's given name should be Danish. Schacht studied medicine, philology and political science before earning a doctorate in 1899 – his thesis was on mercantilism.

Schacht was a freemason, having joined the lodge Urania zur Unsterblichkeit in 1908.

During World War I, Schacht was assigned to the staff of General Karl von Lumm (1864-1930), the Banking Commissioner for Occupied Belgium, to organize the financing of Germany's purchases in Belgium. He was summarily dismissed by General von Lumm when it was discovered that he had used his previous employer, the Dresdner Bank, to channel the note remittances for nearly 500 million francs of Belgian national bonds destined to pay for the requisitions.

After Schacht's dismissal from public service, he had another brief stint at the Dresdner Bank, and then various positions at other banks. In 1923, Schacht applied and was rejected for the position of head of the Reichsbank, largely as a result of his dismissal from von Lumm's service.

Despite the blemish on his record, in November 1923, Schacht became currency commissioner for the Weimar Republic and participated in the introduction of the Rentenmark, a new currency the value of which was based on a mortgage on all of the properties in Germany. After his economic policies helped battle German hyperinflation and stabilize the German mark (Helferich Plan), Schacht was appointed president of the Reichsbank at the requests of president Friedrich Ebert and Chancellor Gustav Stresemann.

In 1926, Schacht provided funds for the formation of IG Farben. He collaborated with other prominent economists to form the 1929 Young Plan to modify the way that war reparations were paid after Germany's economy was destabilizing under the Dawes Plan. In December 1929, he caused the fall of the finance Minister Rudolf Hilferding by imposing upon the government his conditions for obtaining a loan. After modifications by Hermann Muller's government to the Young Plan during the Second Conference of The Hague (January 1930), he resigned as Reichsbank president on 7 March 1930. During 1930, Schacht campaigned against the war reparations requirement in the United States.

Involvement with the Nazi party and government

By 1926, Schacht had left the small German Democratic Party, which he had helped found, and began increasingly lending his support to the Nazi Party (NSDAP), to which he became closer between 1930 and 1932. Though never a member of the NSDAP, Schacht helped to raise funds for the party after meeting with Adolf Hitler. Close for a short time to Heinrich Bruning's government, Schacht shifted to the right by entering the Harzburg Front in October 1931.

Schacht's disillusionment with the existing Weimar government did not indicate a particular shift in his overall philosophy, but rather arose primarily out of two issues:

Schacht believed that if the German government was ever to commence a wholesale reindustrialization and rearmament in spite of the restrictions imposed by Germany's treaty obligations, it would have to be during a period lacking clear international consensus among the Great Powers.

After the July 1932 elections, in which the NSDAP won more than a third of the seats, Schacht and Wilhelm Keppler organized a petition of industrial leaders requesting that president Hindenburg appoint Hitler as Chancellor. After Hitler took power in January 1933, Schacht won re-appointment as Reichsbank president on 17 March.

In August 1934 Hitler appointed Schacht as Germany's Minister of Economics. Schacht supported public-works programs, most notably the construction of autobahnen (highways) to attempt to alleviate unemployment – policies which had been instituted in Germany by von Schleicher's government in late 1932, and had in turn influenced Roosevelt's policies. He also introduced the "New Plan", Germany's attempt to achieve economic "autarky", in September 1934. Germany had accrued a massive foreign currency deficit during the Great Depression, which continued into the early years of the Third Reich. Schacht negotiated several trade agreements with countries in South America and southeastern Europe, under which Germany would continue to receive raw materials, but would pay in Reichsmarks. This ensured that the deficit would not get any worse, while allowing the German government to deal with the gap which had already developed. Schacht also found an innovative solution to the problem of the government deficit by using mefo bills. He was appointed General Plenipotentiary for the War Economy in May 1934 and was awarded honorary membership in the NSDAP and the Golden Party Badge in January 1937.

Schacht disagreed with what he called "unlawful activities" against Germany's Jewish minority and in August 1935 made a speech denouncing Julius Streicher and Streicher's writing in the Nazi newspaper Der Sturmer.

During the economic crisis of 1935–36, Schacht, together with the Price Commissioner Dr. Carl Friedrich Goerdeler, helped lead the "free-market" faction in the German government. They urged Hitler to reduce military spending, turn away from autarkic and protectionist policies, and reduce state control in the economy. Schacht and Goerdeler were opposed by a faction centering on Hermann Goring.

Goring was appointed "Plenipotentiary for the Four Year Plan" in 1936, with broad powers that conflicted with Schacht's authority. Schacht objected to continued high military spending, which he believed would cause inflation, thus coming into conflict with Hitler and Goring.

In 1937 Schacht met with Chinese Finance Minister Dr. H. H. Kung. Schacht told him that "German-Chinese friendship stemmed in good part from the hard struggle of both for independence". Kung said, "China considers Germany its best friend ... I hope and wish that Germany will participate in supporting the further development of China, the opening up of its sources of raw materials, the upbuilding of its industries and means of transportation."

In November 1937 he resigned as Minister of Economics and General Plenipotentiary at both his and Goring's request. He had grown increasingly dissatisfied with Goring's near-total ignorance of economics, and was also concerned that Germany was coming close to bankruptcy. Hitler, however, knew that Schacht's departure would raise eyebrows outside of Germany, and insisted that he remain in the cabinet as minister without portfolio. He remained President of the Reichsbank until Hitler dismissed him in January 1939. He remained as a minister without portfolio, and received the same salary, until he was fully dismissed in January 1943.

Following the Kristallnacht of November 1938, Schacht publicly declared his repugnance at the events, and suggested to Hitler that he should use other means if he wanted to be rid of the Jews. He put forward a plan in which Jewish property in Germany would be held in trust, and used as security for loans raised abroad, which would also be guaranteed by the German government. Funds would be made available for emigrating Jews, in order to overcome the objections of countries that were hesitant to accept penniless Jews. Hitler accepted the suggestion, and authorised him to negotiate with his London contacts. Schacht, in his book The Magic of Money (1967), wrote that Montagu Norman, governor of the Bank of England, and Lord Bearstead, a prominent Jew, had reacted favourably, but the spiritual leader of the London Jews, Chaim Weizmann, opposed the plan. A component of the plan was that emigrating Jews would have taken items such as machinery with them on leaving the country, as a means of boosting German exports.

Schacht was in contact with the German Resistance as early as 1934, though at that time he still believed the Nazi regime would follow his policies. By 1938, he was disillusioned, and was an active participant in the plans for a coup d'etat against Hitler if he started a war against Czechoslovakia. Goerdeler, his colleague in 1935–36, was the civilian leader of the Resistance. Schacht talked frequently with Hans Gisevius, another Resistance figure; when Resistance organizer Theodor Strunck's house (a frequent meeting place) was bombed out, Schacht allowed Strunck and his wife to live in a villa he owned. However, after 1941, Schacht took no active part in the Resistance.

Still, at Schacht's denazification trial (subsequent to his acquittal at Nuremberg) it was declared by a judge that "None of the civilians in the resistance did more or could have done more than Schacht actually did."

After the attempt on Hitler's life on 20 July 1944, Schacht was arrested on 23 July. He was sent to Ravensbruck, then to Flossenburg, and finally to Dachau. In late April 1945 he and about 140 other prominent inmates of Dachau were transferred to Tyrol by the SS, which left them there. They were liberated by the Fifth U.S. Army on 5 May 1945 in Niederdorf, South Tyrol, Dolomites, Italy.

Schacht had supported Hitler's gaining power, and had been an important official of the Nazi regime. Thus he was arrested by the Allies in 1945. He was put on trial at Nuremberg for "crimes against peace" (planning and waging wars of aggression), but not war crimes or crimes against humanity.

Schacht pleaded not guilty to these charges. He cited in his defense that he had lost all official power before the war even began, that he had been in contact with Resistance leaders like Hans Gisevius throughout the war, and that he had been arrested and imprisoned in a concentration camp himself.

His defenders argued that he was just a patriot, trying to make the German economy strong. Furthermore, Schacht was not a member of the NSDAP and shared very little of their ideology. The British judges favored acquittal, while the Soviet judges wanted to convict. The British got their way and Schacht was acquitted.

In 1953, Schacht started a bank, Deutsche Ausenhandelsbank Schacht & Co., which he led until 1963. He also gave advice on economics and finance to heads of state of developing countries, in particular the Non-Aligned countries.

Indirectly resulting from his founding of the bank, Schacht was the plaintiff in a foundational case in German law on the "general right of personality". A magazine published an article criticizing Schacht, containing several incorrect statements. Schacht first requested that the magazine publish a correction, and when the magazine refused, sued the publisher for violation of his personality rights. The district court found the publisher both civilly and criminally liable; on appeal, the appellate court reversed the criminal conviction, but found that the publisher had violated Schacht's general right of personality.

Schacht wrote 26 books during his lifetime, of which at least four have been translated into English:

Hjalmar Schacht has been portrayed by the following actors in film, television and theater productions;