With a Rotation period of 10.7 minutes it has one of the shortest sidereal days of any known object in the Solar System, and cannot possibly be a rubble pile. It is also one of the most easily accessible objects in the Solar System, and its orbit frequently brings it on a path very similar to the optimum Earth–Mars transfer orbit. This, coupled with the fact that it is water rich, makes it an attractive target for further study and a potential source of water for future missions to Mars. 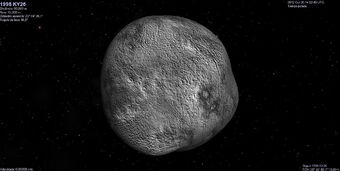 Asteroid 1998 KY26 is the smallest solar system object ever studied in detail and, with a rotational period of 10.7 minutes, was the fastest-spinning object observed at the time of its discovery: most asteroids with established rotational rates have periods measured in hours. It was the first recognized minor object that spins so fast that it must be a monolithic object rather than a rubble pile, as many asteroids are thought to be. Since 1998 KY26 was found to be a fast rotator, several other small asteroids have been found to also have short rotation periods, some even faster than 1998 KY26.

Optical and radar observations indicate that 1998 KY26 is a water-rich object.

These physical properties were measured by an international team of astronomers led by Dr. Steven J. Ostro of the Jet Propulsion Laboratory. The team used a radar telescope in California and optical telescopes in the Czech Republic, Hawaii, Arizona and California.