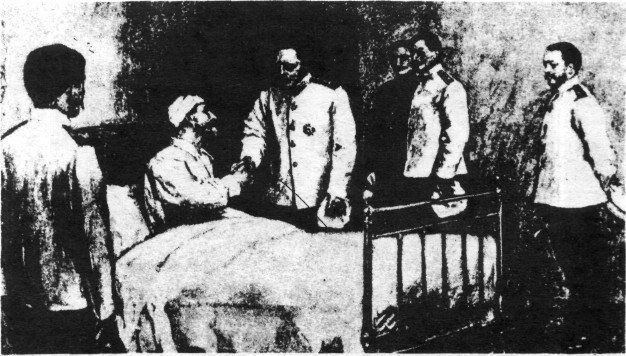 Under Admiral Rozhestvensky's command, the Russian navy holds the record of sailing an all-steel, coal-powered battleship fleet over 18,000 miles (29,000 km) one way to engage an enemy in decisive battle (Battle of Tsushima), selecting the Knyaz Suvorov, one of four brand new battleships of the French-designed Borodino class, as his flagship for the voyage to the Pacific. 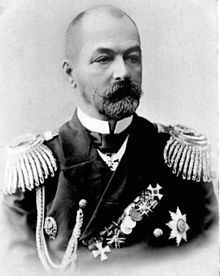 Rozhestvensky was the son of a physician from St Petersburg, and joined the Imperial Russian Navy at the age of 17. He graduated from the Sea Cadet Corps, where he mastered English and French, in 1868, and the Mikhailovsky Artillery Academy in 1873. He initially served with the Baltic Fleet as a gunnery officer. In 1876 he transferred to the Black Sea Fleet.

During the Russo Turkish War Rozhestvensky served on board the gunboat Vesta. On June 10, 1877 six torpedo boats, five of which were armed with spar torpedoes, attempted to attack four ironclads of the Ottoman Navy at Sulina. Rozhestvensky volunteered to lead the first attack against the Turkish warships but his torpedo boat became caught up in the rope boom defenses that protected the enemy ships. The attack was beaten back by Turkish gunfire which destroyed one torpedo boat and the remaining boats withdrew, leaving the enemy ironclads intact. In July 1877 while still assigned to the Vesta, he engaged and damaged an Ottoman battleship, the Fethi-Bulend in a five-hour battle. Rozhestvensky was awarded the Order of Saint Vladimir and Order of St George for this action and was promoted to lieutenant commander. However, after the war he revealed in a newspaper article that he had falsified his reports, and that the overloaded Fethi-Bulend escaped with only minor damage. However, this revelation had no adverse impact on his career. From 1883 to 1885 Rozhestensky was seconded to the newly formed Bulgarian Navy. He also designed a defense plan for the Bulgarian coastline, and was one of the founders of the Technology Association of Bulgaria.

Rozhestensky returned to Russian service and was senior officer on the battery ship Kreml and the cruiser Gerzog Edinburgski. He then commanded the clipper Naezdnik and gunboat Grozyachiy. In 1891-93 he was naval attache to London. In 1894 he commanded the Vladimir Monomakh which was part of the Russian Mediterranean Squadron under the command of Admiral Stepan Makarov. In 1896-98 he commanded the coast defence ship Pervenets. In 1898 he was promoted to rear admiral and became commander of the gunnery school of the Baltic Fleet. In 1900 he commanded the salvage operation for the General Admiral Graf Apraksin. In 1902 he was appointed Chief of the Naval Staff and proposed a plan for strengthening the Imperial Russian Navy in the Far East.

Prior to the war against Japan starting in 1904, Rozhestvensky was commander of the Baltic Fleet. Tsar Nicholas II ordered Rozhestvensky to take the Baltic Fleet to East Asia to protect the Russian naval base of Port Arthur. The Tsar had selected the right man for the job, for it would take an iron-fisted commander to sail an untested fleet of brand new battleships (for some of the new Borodinos, this voyage was their shakedown cruise) and new untrained sailors on the longest coal-powered battleship fleet voyage in recorded history. Rozhestvensky had a fiery temper when dealing with a subordinate, and both officers and men knew to stand clear of "Mad Dog" when a subordinate either disobeyed orders, was incompetent, or both.

Rozhestvensky was fully aware that he had a new untrained fleet under his command and that re-coaling stations would not be available during the journey, due to Britain's alliance with Japan; and that both the shakedown testing of the new battleships and the gunnery practice/training would have to occur during the voyage. In addition, re-coaling would have to be done at sea, instead of in port as with most other navies. As a consequence of these circumstances, the mission-minded commander would sometimes fire service ammunition (live gunfire) across the bows of an errant warship, and in a fiery moment fling his binoculars from the bridge into the sea. When his battleship fleet set sail in 1904, Rozhestvensky's staff ensured that his flagship, Knyaz Suvorov, had a good supply of binoculars on board.

Nevertheless the inexperience of the Russian Baltic Fleet almost triggered a war between Russia and Great Britain as it sailed through the North Sea. After several Russian ships mistook British fishing trawlers at Dogger Bank for torpedo boats from the Imperial Japanese Navy, they opened fire on the unarmed civilian vessels. The Dogger Bank incident on the night of the 21–22 October 1904 resulted in the deaths of three British fishermen and many wounded. One sailor and a priest aboard a Russian cruiser were also killed in the crossfire.

The Russian government agreed to investigate the incident following a great deal of international diplomatic pressure. Rozhestvenski was ordered to dock in Vigo, Spain while battleships of the Royal Navy from the British Home Fleet were prepared for war. Several British cruiser squadrons shadowed Rozhestvenski's fleet as it made its way through the Bay of Biscay. On arrival in Spain, Rozhestvenski left behind those officers he considered responsible for the incident (as well as at least one officer who had been critical of him). On November 25, 1904, the British and the Russian governments signed a joint agreement in which they agreed to submit the issue to an International Commission of Inquiry at The Hague. On February 26, 1905, the commission published its report. It criticized Rozhestvenski for allowing his ships to fire upon the British ships. But noted that "as each [Russian] vessel swept the horizon in every direction with her own searchlights to avoid being taken by surprise, it was difficult to prevent confusion". The report also concluded that once the mistake was known "Admiral Rozhestvenski personally did everything he could, from beginning to end of the incident, to prevent [the trawlers] from being fired upon by the squadron". Russia eventually paid £66,000 (£5.8m today) in compensation.

Rozhestvenski believed from the start that the plan to send the Baltic Fleet to Port Arthur was ill-conceived, and vehemently opposed plans to include a motley collection of obsolete vessels, the Third Pacific Squadron to his fleet, to the extent of refusing to reveal to the Admiralty his exact routing from Madagascar and to share his battle plan with Third Pacific Squadron commander Nikolai Nebogatov. Remote and distrustful of his staff, Rozhestvenski grew increasingly bitter and pessimistic as he approached Asia. Almost as soon as the Baltic Fleet arrived in the Far East in May 1905, it was engaged by the Japanese Navy at the decisive Battle of Tsushima (27–28 May 1905).

Japanese Admiral Togo Heihachiro drew upon his experiences from the battles of Port Arthur and the Yellow Sea, and this time would not split his fires nor engage Rozhestvensky at excessive ranges, as he had done with Admiral Vitgeft at the Battle of the Yellow Sea the year previously. He would instead, with the proper use of reconnaissance vessels and wireless communications position his battle fleet in such a way as to "preserve his interior lines of movement", which would allow him to have shorter distances to cover while causing Rozhestvensky to have longer distances to travel, regardless of battleship speeds.

Naval intelligence had already informed Togo of Rozhestvensky's mission, that of reaching Vladivostok, and avoiding contact with the Japanese navy if at all possible, and fighting as little as possible, if forced into it. Rozhestvensky's objective was to reinforce the Vladivostok Squadron, and then, when the Russian navy felt sufficiently prepared, they would engage the Japanese navy in a decisive action.

With this knowledge in possession, Togo planned on preempting the Russian plan, by positioning his battle fleet to "bring the Russian fleet to battle, regardless of the speed of either battlefleet." Admiral Togo was able to appear directly across Rozhestvensky's line of advance; he was headed" (Rozhestvensky's T had been crossed). With only most of his bow guns to use, Rozhestvensky's main batteries were "thrown successively out of bearing" as he continued to advance. Other than surrender or retreat, Rozhestvensky had but two choices; fight a pitched battle or charge Togo's battleline. He chose the former, and by the evening of 27 May 1905, Rozhestvensky's flagship and the majority of his fleet were on the bottom of the Tsushima Straits. The Russians had lost 5,000 saliors.

During the battle, Rozhestvensky was wounded in the head by a shell fragment. The unconscious admiral was transferred to the destroyer Buinii and subsequently to the destroyer Bedovii. He was taken prisoner when the ship was later captured by the Imperial Japanese Navy. He recovered in a hospital in Japan, where he was visited by Togo, and after the signing of the Treaty of Portsmouth, returned to St Petersburg via the Trans-Siberian Railway.

In 1906, Rozhestvensky faced court-martial for the disaster, along with each of his surviving battleship commanders. Some faced prison and some the firing squad for either losing the battle or surrendering on the high seas. The Tsar's court was fully aware that Admiral Nikolai Nebogatov had surrendered the Russian fleet, as Rozhestvensky had been wounded and unconscious for most of the battle, and was very reluctant to accept his statements of responsibility. Nonetheless, Rozhestvensky was adamant in his defense of his subordinate commanders and maintained total responsibility, pleading guilty to losing the battle. As was expected (and hoped) by the courts, the Tsar commuted the death-sentenced captains to short prison terms and pardons for the remaining officers.

The Russian Navy had accrued several combat experienced admirals during the war; Admirals Oskar Victorovich Stark, Stepan Makarov, and Wilgelm Vitgeft being amongst them. Makarov had been the most promising with his "energy, tactics" and his "ability to inspire confidence in his subordinates." But by a series of set backs all of them had been lost to Russia, from one cause or another.

Although Makarov may have been Russia's greatest asset in the war, had he survived, he may not have been the right choice to lead the "Baltic Fleet" (later redesignated the 2nd Pacific Fleet) to the Far East. Even without Battleship combat experience, Admiral Rozhestvensky was the one man with the personality, skill, and determination to sail an untested battleship fleet on an unprecedented voyage to the other side of the world. So much that Germany's Kaiser Wilhelm remarked to the Czar during a fleet exercise in 1902, "I wish I had such splendid admirals as your Captain Rozhestvensky in my fleet!"

Rozhestvensky's opponent, Admiral Togo, had been the adversary of Russia's combat experienced admirals since the beginning of the war, but he, unlike his Russian counterparts would be present on the battlefield; to exploit those lessons learned from previous battles, and use that experience against Rozhestvensky; in the end, leaving him no choice but to either fight or retreat.

Rozhestvensky lived out the last years of his life in St Petersburg as a recluse. He died of a heart attack in 1909 and was buried in the Alexander Nevsky Lavra.