Toronto ( ) is the most populous city in Canada, and the capital of the province of Ontario. In 2011, Toronto had a population of 2,615,060, making it the fourth most populous city in North America, after Mexico City, New York City, and Los Angeles. The Greater Toronto Area (GTA) is the most populous metropolitan area in Canada, with 5,583,064 people living in the census metropolitan area as of 2011. Classified as an alpha world city by the GaWC, Toronto is an international centre of business, finance, arts, and culture.

Indigenous peoples have lived for thousands of years in the area that is now Toronto. The urban history of the city dates back to 1793, when British officials negotiated the Toronto Purchase with the Mississaugas of the New Credit. They established the Town of York, which was designated by lieutenant governor John Graves Simcoe as the capital of the Crown colony of Upper Canada. The town was ransacked in the Battle of York during the War of 1812. In 1834, York was incorporated as a city and renamed Toronto, and in 1867 it was designated as the capital of Ontario. The city has occasionally expanded its borders through amalgamation with surrounding municipalities, a process that has left Toronto with over 130 clearly defined neighbourhoods that have each retained their distinctive nature. This has earned it the nickname "City of Neighbourhoods".

Located in Southern Ontario on the northwestern shore of Lake Ontario, Toronto sits on a broad sloping plateau intersected by an extensive network of rivers, deep ravines, and urban forest. It is at the heart of the densely populated region surrounding the western end of Lake Ontario known as the Golden Horseshoe, which is home to 8,686,923 people, or around 26% of the entire population of Canada. The cosmopolitan and multicultural population of Toronto reflects its current and historical role as an important destination for immigrants to Canada. It is one of the worlds most diverse cities, with about 50% of residents having been born outside of Canada, and over 200 distinct ethnic origins represented among its population. While English is the primary language spoken by the majority of Torontonians, there are over 140 different languages spoken in the city.

As Canadas commercial capital, the city is home to the Toronto Stock Exchange, the headquarters of Canadas five largest banks, and the headquarters of many large Canadian and multinational corporations. It is a city of notable and varied cultural institutions, which include numerous museums, theatres, galleries, festival events, and sporting activities. Widely regarded as the entertainment capital of Canada, Toronto is a prominent centre for music, performing arts, motion picture production, and television production, and is home to the headquarters of Canadas major national broadcast networks and media outlets. The citys economy is highly diversified, with leading sectors including technology, design, financial services, life sciences, education, fashion, environmental innovation, business and professional services, research, arts, transportation and logistics, publishing, food services, and tourism. Toronto is placed among the Global Leaders in the Global Financial Centres Index, and is also consistently rated as one of the worlds most liveable cities by the Economist Intelligence Unit and the Mercer Quality of Living Survey. 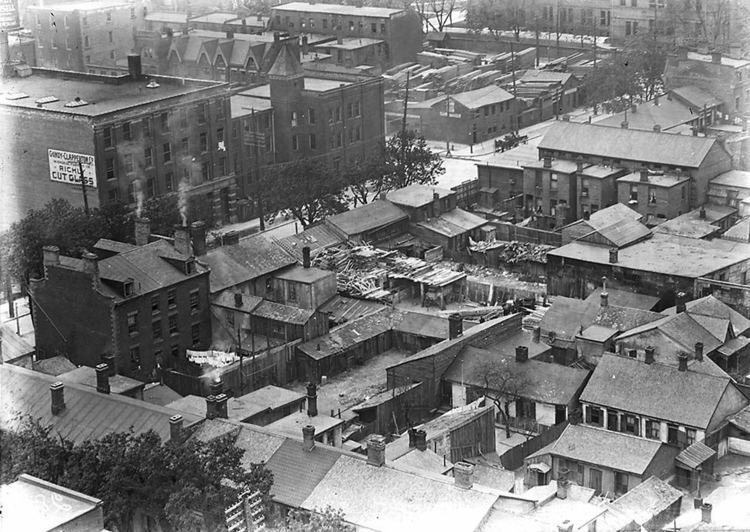 When Europeans first arrived at the site of present-day Toronto, the vicinity was inhabited by the Iroquois, who by then had displaced the Wyandot people people that had occupied the region for centuries before c. 1500. The name Toronto is likely derived from the Iroquois word tkaronto, meaning "place where trees stand in the water". This refers to the northern end of what is now Lake Simcoe, where the Huron had planted tree saplings to corral fish. A portage route from Lake Ontario to Lake Huron running through this point, the Toronto Carrying-Place Trail, led to widespread use of the name. In the 1660s, the Iroquois established two villages within what is today Toronto, Ganatsekwyagon on the banks of the Rouge River and Teiaiagonon the banks of the Humber River. By 1701, the Mississauga had displaced the Iroquois, who abandoned the Toronto area at the end of the Beaver Wars. 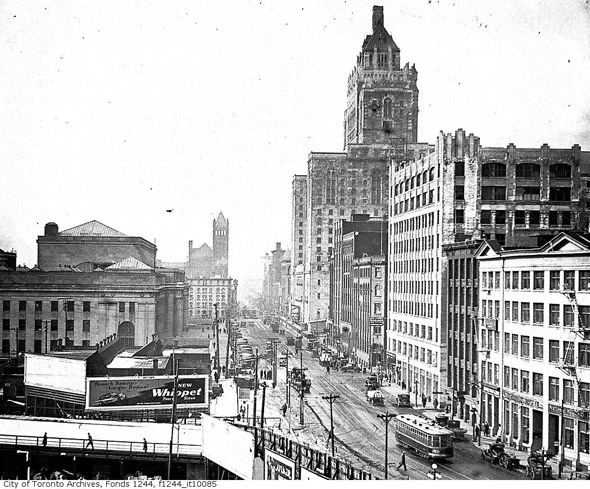 French traders founded Fort Rouille on the current Exhibition grounds in 1750, but abandoned it in 1759. During the American Revolutionary War, the region saw an influx of British settlers as United Empire Loyalists fled for the unsettled lands north of Lake Ontario. In 1787, the British negotiated the Toronto Purchase with the Mississaugas of New Credit, thereby securing more than a quarter million acres (1000 km2) of land in the Toronto area.

In 1793, Governor John Graves Simcoe established the town of York on the existing settlement, naming it after Prince Frederick, Duke of York and Albany. Simcoe chose the town to replace Newark as the capital of Upper Canada, believing that the new site would be less vulnerable to attack by the US. Fort York was constructed at the entrance of the towns natural harbour, sheltered by a long sandbar peninsula. The towns settlement formed at the eastern end of the harbour behind the peninsula, near the present-day intersection of Parliament Street and Front Street (in the Corktown–St. Lawrence area).

Toronto covers an area of 630 square kilometres (243 sq mi), with a maximum north-south distance of 21 kilometres (13 mi) and a maximum east-west distance of 43 km (27 mi). It has a 46-kilometre (29 mi) long waterfront shoreline, on the northwestern shore of Lake Ontario. The Toronto Islands and Port Lands extend out into the lake, allowing for a somewhat sheltered Toronto Harbour south of the downtown core. The citys borders are formed by Lake Ontario to the south, Etobicoke Creek and Highway 427 to the west, Steeles Avenue to the north and the Rouge River and the Scarborough-Pickering Townline to the east. 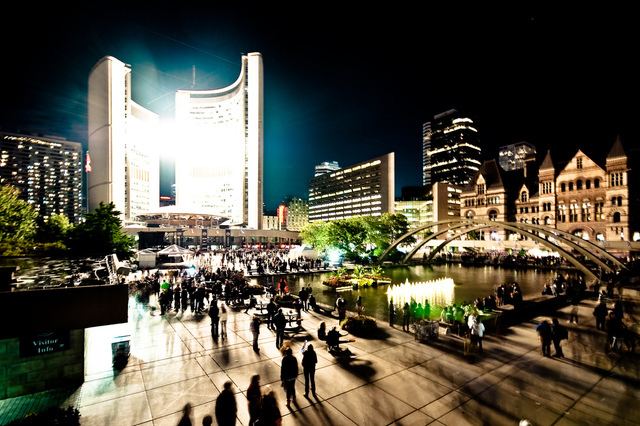 Toronto theatre and performing arts scene has more than fifty ballet and dance companies, six opera companies, two symphony orchestras and a host of theatres. The city is home to the National Ballet of Canada, the Canadian Opera Company, the Toronto Symphony Orchestra, the Canadian Electronic Ensemble, and the Canadian Stage Company. Notable performance venues include the Four Seasons Centre for the Performing Arts, Roy Thomson Hall, the Princess of Wales Theatre, the Royal Alexandra Theatre, Massey Hall, the Toronto Centre for the Arts, the Elgin and Winter Garden Theatres and the Sony Centre for the Performing Arts (originally the "OKeefe Centre" and formerly the "Hummingbird Centre").

Ontario Place features the worlds first permanent IMAX movie theatre, the Cinesphere, as well as the Molson Amphitheatre, an open-air venue for music concerts. In spring 2012, Ontario Place closed after a decrease in attendance over the years. Although the Molson Amphitheatre and harbour still operate, the park and Cinesphere are no longer in use.

Each summer, the Canadian Stage Company presents an outdoor Shakespeare production in Torontos High Park called "Dream in High Park". Canadas Walk of Fame acknowledges the achievements of successful Canadians, with a series of stars on designated blocks of sidewalks along King Street and Simcoe Street.

The production of domestic and foreign film and television is a major local industry. Toronto as of 2011 ranks as the third largest production centre for film and television after Los Angeles and New York City, sharing the nickname "Hollywood North" with Vancouver. The Toronto International Film Festival is an annual event celebrating the international film industry. Another prestigious film festival is the Toronto Student Film Festival, that screens the works of students ages 12–18 from many different countries across the globe.

Torontos Scotiabank Caribbean Carnival (also known as Caribana) takes place from mid-July to early August of every summer. Primarily based on the Trinidad and Tobago Carnival, the first Caribana took place in 1967 when the citys Caribbean community celebrated Canadas Centennial. More than forty years later, it has grown to attract one million people to Torontos Lake Shore Boulevard annually. Tourism for the festival is in the hundred thousands, and each year, the event generates over $400 million in revenue into Ontarios economy.

Toronto is an international centre for business and finance. Generally considered the financial capital of Canada, Toronto has a high concentration of banks and brokerage firms on Bay Street, in the Financial District. The Toronto Stock Exchange is the worlds seventh-largest stock exchange by market capitalization. The five largest financial institutions of Canada, collectively known as the Big Five, have national offices in Toronto.