On the Gold Coast of Baja California, Tijuana is the municipal seat, cultural, and commercial center of Tijuana Municipality, covering 23.5% of the municipality. A dominant manufacturing center of the North American continent, the city maintains facilities of numerous multinational conglomerate companies. The 2000s (decade) saw Tijuana become the medical device manufacturing capital of North America. Also a growing cultural center, Tijuana has been recognized as a most important new cultural mecca. The city is the most visited border city in the globe; sharing an approximate 24-kilometre-long border (15 mi) with its sister city San Diego, over fifty million people annually cross the border between these two cities. This metropolitan crossing makes the San Ysidro Port of Entry the busiest land-border crossing in the world. It is estimated that the two border crossing stations between the cities proper of San Diego and Tijuana account for 300,000 daily border crossings alone.

Tijuana is the 29th largest city in the Americas and is the westernmost city in Mexico. According to the 2010 census, the Tijuana metropolitan area was the fifth-largest in Mexico, with a population of 1,784,034. The international metropolitan region was estimated to be just over five million in 2009 and approximately 5,105,769 in 2010, making it the third largest metropolitan area in the Californias, 19th largest metropolitan area in the Americas, and the largest bi-national conurbation that is shared between US and Mexico. Tijuana is becoming more suburbanized like San Diego; during the 2000s the drug violence had residents moving out of the congested urban core into isolated communities within the municipality and beyond, as evidenced by 2010 Census figures and growth patterns.

Tijuana traces its modern history to the arrival of Spanish explorers in the 16th century who were mapping the coast of the Californias. As the American conquest of northern Mexico ended with the Treaty of Guadalupe Hidalgo, Tijuanas new international position on the border gave rise to a new economic and political structure. The city was founded in July 11, 1889 as urban development began. Often known by its initials, T.J., and nicknamed Gateway to Mexico, the city has historically served as a tourist center dating back to the 1880s.

The land where the city of Tijuana would be built was originally inhabited by the Kumeyaay, a tribe of Yuman-speaking hunter-gatherers. Europeans arrived in 1542, when the explorer Juan Rodriguez Cabrillo toured the coastline of the area, which was later mapped in 1602 by Sebastian Vizcaino. In 1769, Juan Crespi documented more detailed information about the area that would be called the Valley of Tijuana. Junipero Serra founded the first mission of Alta California in nearby San Diego.

In 1848, as a result of the Mexican-American War with the United States, Mexico lost all of Alta California. The majority of the 1,000 Hispanic families living in Alta California stayed there, though some moved south to remain inside Mexico.

Because of this Tijuana gained a different purpose on the international border. The area had been populated by ranchers, but Tijuana developed a new social economic structure. These were farming and livestock grazing, plus as a transit area for prospectors.

Urban settlement began in 1889, when descendants of Santiago Arguello and Augustin Olvera entered an agreement to begin developing the city of Tijuana. The date of the agreement, July 11, 1889, is recognized as the founding of the city.

Tijuana saw its future in tourism from the beginning. From the late 19th century to the first few decades of the 20th century, the city attracted large numbers of Californians coming for trade and entertainment. The California land boom of the 1880s led to the first big wave of tourists, who were called "excursionists" and came looking for echoes of the famous novel "Ramona" by Helen Hunt Jackson.

In 1911, during the Mexican Revolution, revolutionaries claiming loyalty to Ricardo Flores Magon took over the city for shortly over a month. Federal troops then arrived. Assisted by the "defensores de Tijuana", they routed the revolutionaries, who fled north and were promptly arrested by the United States Army.

The Panama-California Exposition of 1915 brought many visitors to the nearby California city of San Diego. Tijuana attracted these tourists with a Feria Tipica Mexicana - Typical Mexican Fair. This included curio shops, regional food, thermal baths, horse racing and boxing.

The first professional race track opened in January 1916, just south of the border gate. It was almost immediately destroyed by the great "Hatfield rainmaker" flood of 1916. Rebuilt in the general area, it ran horse races until the new Agua Caliente track opened in 1929, several miles south and across the river on higher ground.

Legal drinking and gambling attracted U.S nationals in the 1920s during Prohibition. The Avenida Revolucion area became the citys tourist center, with casinos and the Hotel Caesars, birthplace of the Caesar salad.

In 1928, the Agua Caliente Touristic Complex was opened, including hotel, spa, dog-track, private airport, golf course and gambling casino. A year later, the new Agua Caliente Racetrack joined the complex. During the eight years it operated, the Agua Caliente hotel, casino and spa achieved a near mythical status, with Hollywood stars and gangsters flying in and playing. Rita Hayworth was discovered there. Musical nightclub productions were broadcast over the radio. A singer known as "la Faraona" got shot in a love-triangle and gave birth to the myth of a beautiful lady ghost.

Remnants of the Agua Caliente casino can be seen in the outdoor swimming pool and the "minarete" (actually a former incinerator chimney) nearby the southern end of Avenida Sanchez Taboada, on the grounds of what is now the Lazaro Cardenas educational complex.

In 1935, President Cardenas decreed an end to gambling and casinos in Baja California, and the Agua Caliente complex faltered, then closed. In 1939, it was reopened as a Junior High School (now, Preparatoria Lazaro Cardenas). The buildings themselves were torn down in the 1970s and replaced by modern scholastic architecture.

In 1925, the city attempted to shed its negative image of hedonism and lawlessness created by American mob empresarios by renaming itself Zaragoza, but its name soon reverted to Tijuana.

With increased tourism and a large number of Mexican citizens relocating to Tijuana, the citys population grew from 21,971 to 65,364 between 1940 and 1950.

With the decline of nightlife and tourism in the 1950s, the city restructured its tourist industry, by promoting a more family-oriented scene. Tijuana developed a greater variety of attractions and activities to offer its visitors.

In 1994, PRI presidential candidate Luis Donaldo Colosio was assassinated in Tijuana while making an appearance in the plaza of Lomas Taurinas, a neighborhood nestled in a valley near Centro. The shooter was caught and imprisoned, but doubts remain about who the mastermind might have been.

Tijuana is the western-most city in Mexico, and consequently in Latin America, and the 2nd largest city of northern Mexico. Located approximately 210 kilometres (130 mi) west of the state-capital, Mexicali, the city is bordered to the north by the cities of Imperial Beach, and the San Diego neighborhoods of San Ysidro and Otay Mesa, California. To the southwest of the city is Rosarito Beach, while to the south is unincorporated territory of Tijuana Municipality. The city is nestled among hills, canyons, and gullies. The central part of the city lies in a valley through which flows the channeled Tijuana River. 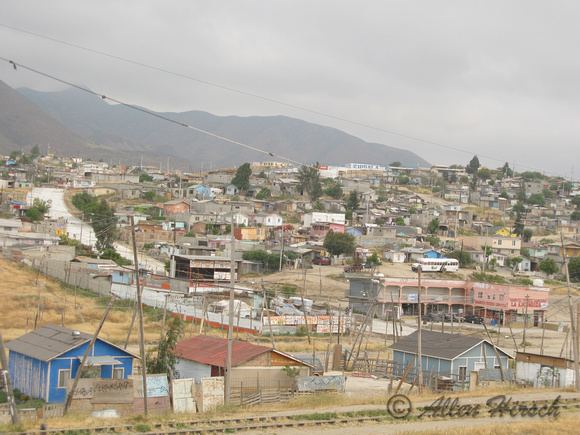 Housing development in the Tijuana Hills has led to eradication of many seasonal mountain streams. This lack of natural drainage makes places within the city vulnerable to landslides during the rainy season. The varied terrain of Tijuana gives the city elevation extremes that range from 0 metres (0 ft) to 790 metres (2,590 ft).

Tijuana is noted for its rough terrain, which includes many canyons, steep hills, and mesas. Among noted canyons in Tijuana are Canyon K and Canyon Johnson. Large Tijuana hills include Red Hill (Cerro Colorado) and Hill of the Bees (Cerro de las Abejas) in the eastern part of the city.

The city is located near the terminus of the Tijuana River and within the Tijuana River Basin. The Tijuana River is an intermittent river, 195 km (121 mi) long, on the Pacific coast of northern Baja California in Mexico and Southern California in the United States. It drains an arid area along the California–Baja California border, flowing through Mexico for most of its course and then crossing the border for the last 8 km (5 mi) of its course where it forms an estuary that empties into the ocean. The rivers lower reaches harbor the last undeveloped coastal wetlands in San Diego County, and some of the last in Southern California, amidst a highly urbanized environment at the southern city limits of Imperial Beach.

As Downtown Tijuana was built at the bottom of the river valley, the district is subject to seasonal flooding created by drain-off from the Tijuana Hills. During this time, east-bound portions of the Via Rapida (east-west highway) may be blocked off by the Tijuana Police due to hazardous conditions.

Tijuana is a large manufacturing center, and in addition to tourism, it serves as a cornerstone of the city economy. In the past decade alone, Tijuana became the medical device manufacture capital of the North American continent, surpassing previous leader Minneapolis - Saint Paul.

Many foreigners travel to Tijuana to drink and dance, buy prescription drugs, purchase bootleg brand-name clothing, timepieces, and other personal accessories found globally, as well as manufactured and hand-crafted local curiosities. Locals and regular tourists avoid hassles by visiting the clubs at Plaza Fiesta or other areas of the Zona Rio without the crowds, heavy marketing, and occasional tourist misbehavior or outright lawbreaking common on the Revolucion strip. However, Avenida Revolucion has been known for its proliferation of nightclub shows, primarily catering to casual tourists. While still an entertaining town with an enjoyable atmosphere, locals and tourists alike would agree that it has lost its "anything goes" mentality which it had once acquired, a mindset that was dangerous to tourists, locals, and the tourism industry as a whole.

Tijuana is also known as the birthplace of the "Tijuana Special," which is a classic Tex-Mex dish consisting of enchiladas, rice and refried beans. This dish was popularized by Tippys, an American Tex-Mex restaurant.