As Spain prepares an armada to invade England, British privateer Geoffrey Thorpe (Errol Flynn) embarks on a mission to loot Spanish ships. When he captures the vessel carrying ambassador Don Jose Alvarez de Cordoba (Claude Rains), the dashing captain falls for his niece, the beautiful Dona Maria (Brenda Marshall), who settles comfortably in England. Dedicated to protecting British interests, Thorpe heads out to sea on a dangerous expedition that may determine the countrys fate. 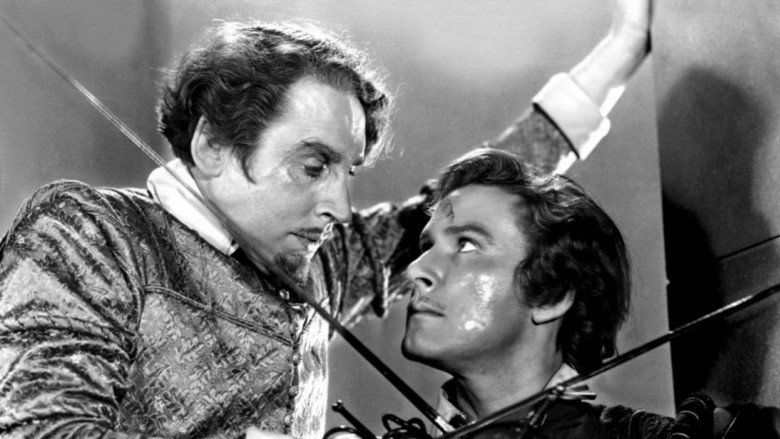 The Sea Hawk is a 1940 American Warner Bros. feature film starring Errol Flynn as an English privateer who defends his nations interests on the eve of the Spanish Armada. The film was the tenth collaboration between Flynn and director Michael Curtiz. The films screenplay was written by Howard Koch and Seton I. Miller. The sparkling and rousing musical score is recognized as a high point in Erich Wolfgang Korngolds career. 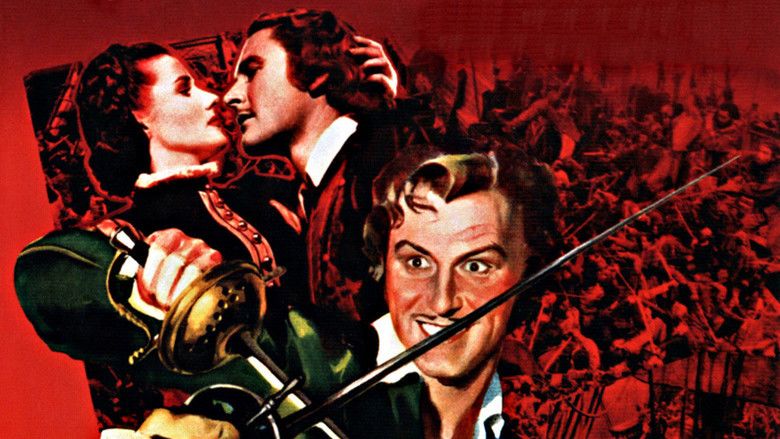 The film was digitally colorized in 1991. Colorized versions have been broadcast on American television and distributed on VHS tape, but only the black-and-white versions, both edited (109 minutes) and restored/uncut (127 minutes), have been released in DVD formats. Currently there are no plans to release the digitally colored version on DVD. 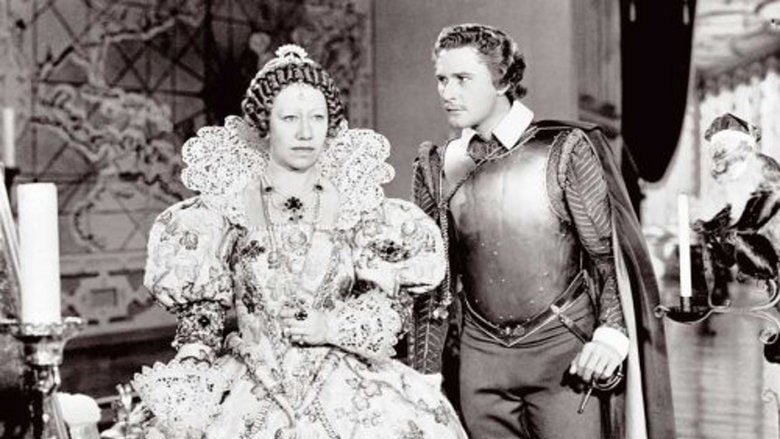 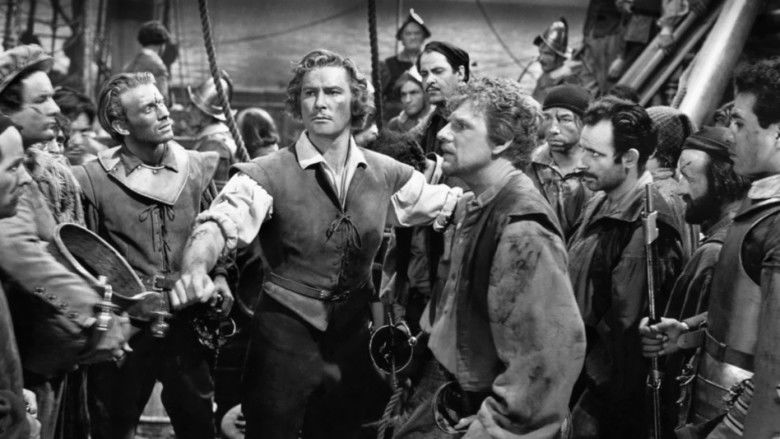 The film begins with King Philip II of Spain (Montagu Love) declaring his intention to destroy England and after this "puny rockbound island as barren and treacherous as her Queen" is out of the way, he believes that world conquest will follow: he says his great wall map, one day, "will have ceased to be a map of the world; it will be Spain." He sends one of his courtiers, Don Alvarez (Claude Rains), as his ambassador to allay the suspicions of Queen Elizabeth I (Flora Robson) about the great armada he is building to invade England. In England, some of the Queens ministers plead with her to build a fleet, which she hesitates to do in order to spare the purses of her subjects.

The ambassadors ship is captured en route to England by the Albatross and her captain, Geoffery Thorpe (Errol Flynn). Don Alvarez and his niece, Dona Maria (Brenda Marshall), are taken aboard and transported to England. Thorpe is immediately enchanted by Dona Maria and gallantly returns her plundered jewels. Her detestation of him softens as she too begins to fall in love. 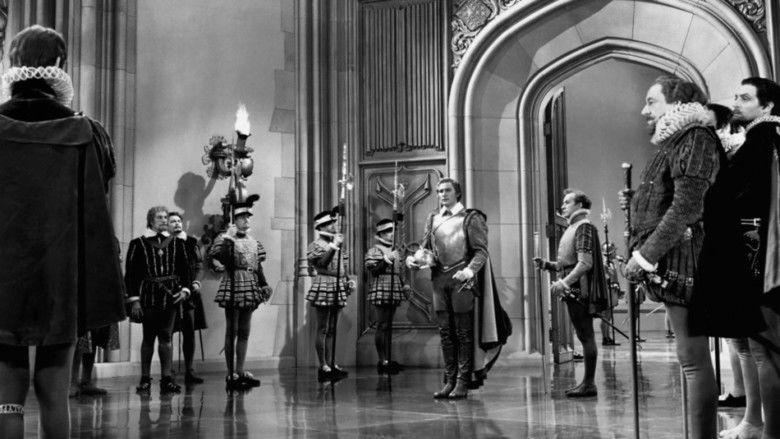 Don Alvarez is granted an audience with the Queen and complains about his treatment; Dona Maria is accepted as one of her maids of honour. The "Sea Hawks", a group of English privateers who loot Spanish ships for "reparations" appear before the Queen, who scolds them (at least publicly) for their piratical attacks and for endangering the peace with Spain. Captain Thorpe finally appears and (in private) proposes a plan to seize a large caravan of Spanish gold in the New World and bring it back to England. The Queen is wary of Spains reaction, but allows Thorpe to proceed. 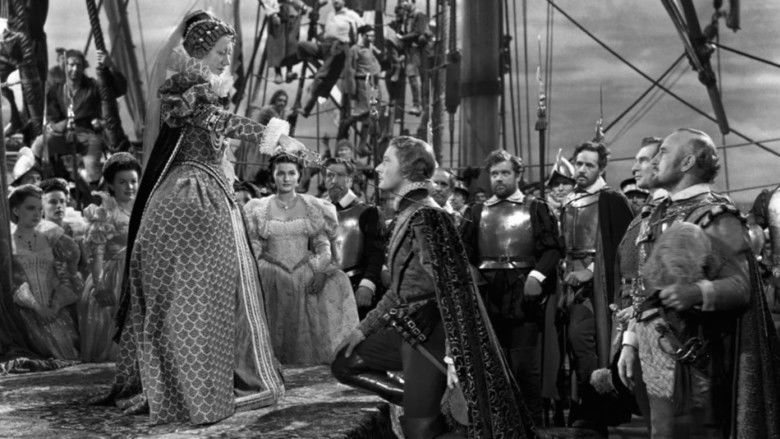 Suspicious of Thorpes expedition, Lord Wolfingham (Henry Daniell), one of the Queens ministers (and a secret Spanish collaborator), sends a spy to try to discover where the Albatross is really heading, but to no avail; the courtiers are told that Thorpe is going on a trading expedition up the River Nile in Egypt. Upon visiting the chartmaker responsible for the charts for Thorpes next voyage, Don Alvarez and Lord Wolfingham determine that he is really sailing to the Isthmus of Panama and order Don Alvarezs Spanish captain to sail ahead to set up an ambush. When the Albatross reaches its destination, part of her crew seizes the caravan, but they fall into a well-laid trap and are driven into the swamps. Thorpe and a few others survive and return to their ship, only to find it in Spanish hands. Thorpe and his crew are returned to Spain, tried by the Inquisition, and sentenced to the galleys for the rest of their lives. In England, Don Alvarez informs the Queen of Thorpes fate, causing his niece to faint. The Queen and Don Alvarez exchange heated words, and she expels him from her court. 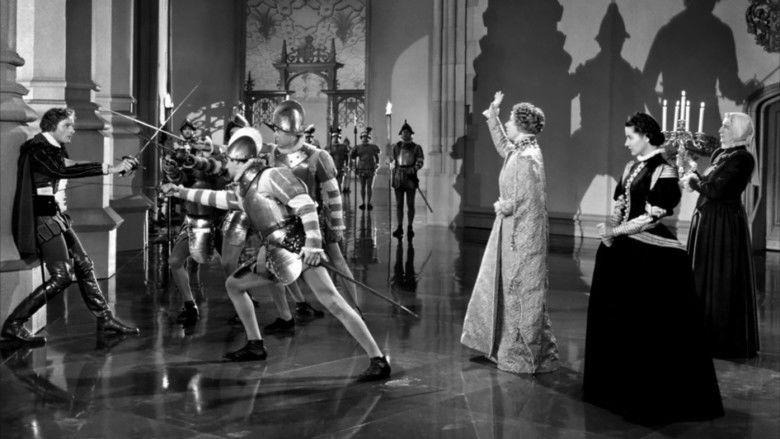 On the Spanish galley, Thorpe meets an Englishman named Abbott, who was captured trying to uncover evidence of the Armadas true purpose. Through cunning, the prisoners take over the ship during the night. They board another ship in the same harbor, where an emissary has stored secret incriminating plans. Thorpe and his men capture both and sail back to England with the plans in hand. 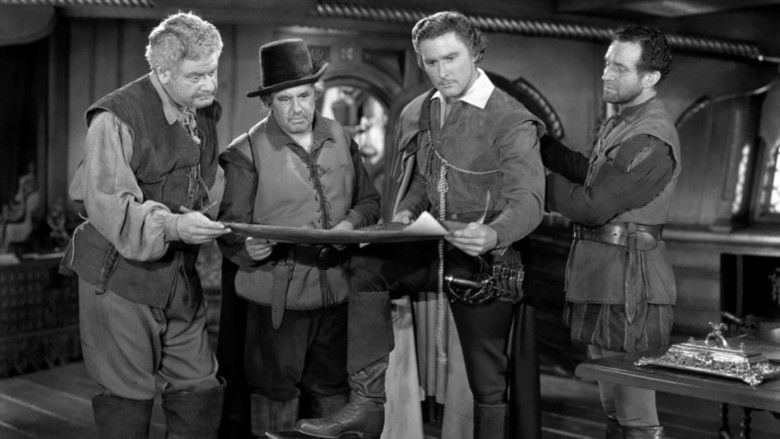 Upon reaching port, Thorpe tries to warn the Queen. A carriage bringing Don Alvarez to the ship which, unknown to him, Thorpe had captured, also brings his niece. Don Alvarez boards the ship and is held prisoner, while Captain Thorpe, dressed in the uniform of a Spanish courtier, sneaks into the carriage carrying Dona Maria, who has decided to stay in England and wait for Thorpes return. The two finally declare their love for each other, and Maria helps Thorpe to sneak into the palace. However, Lord Wolfinghams spy, who had escorted the ambassador and his niece, spots Thorpe and alerts the castle guards to stop the carriage and take Thorpe prisoner. Thorpe escapes and enters the Queens residence, fending off guards all the while. Eventually, Thorpe runs into Lord Wolfingham and, after a sword fight, kills the traitor. 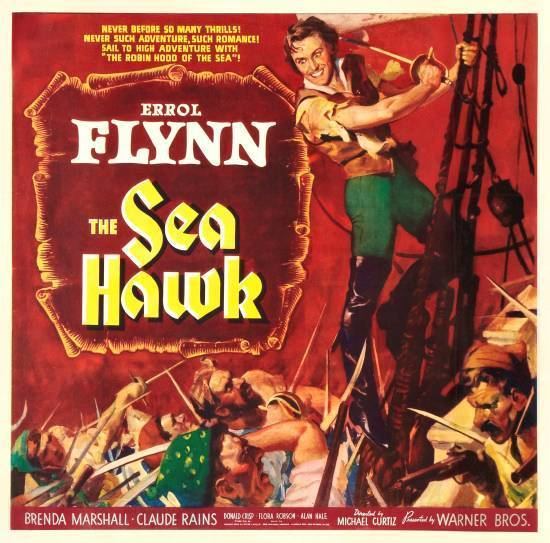 With Dona Marias assistance, Thorpe reaches the Queen and provides proof of King Phillips intentions. Elizabeth knights Captain Thorpe for his gallantry, with Dona Maria present, and declares her intention to build a great fleet to oppose the Spanish threat. 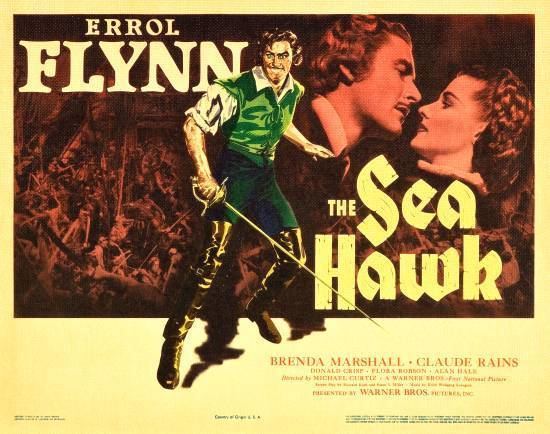 The movie was announced in June 1936, with Errol Flynn - then coming off his success with Captain Blood - already attached as star. 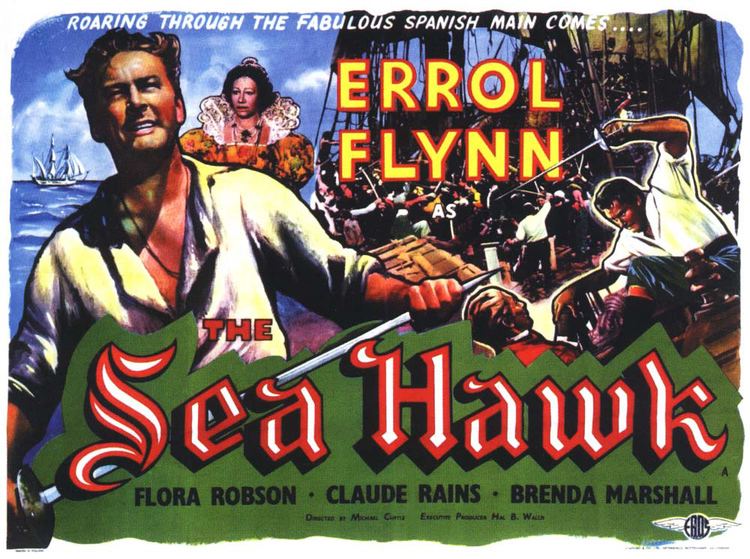 Originally planned as an adaptation of Rafael Sabatinis 1915 novel The Sea Hawk, the film utilized an entirely different story inspired by the exploits of Sir Francis Drake, unlike the 1924 silent film adaptation, which was fairly faithful to Sabatinis plot.

Adaptations of the novel were written by Richard Neville and Delmer Daves before Seton I Miller wrote a basically new story called Beggars of the Sea based on Sir Francis Drake. Sabatinis name was still used in promotional materials however as it was felt it had commercial value. Howard Koch then reworked Millers script while still keeping the basic structure and story.

The speech the Queen gives at the close of the film was meant to inspire the viewing British audience, which was already in the grip of the Second World War. Suggestions that it was the duty of all free men to defend liberty, and that the world did not belong to any one man (an obvious insinuation of Hitlers wish to conquer Europe) were rousing.

The Warner Brothers DVD release of 2005 includes a 1940 Movietone News newsreel of the Battle of Britain, the short "Alice in Movieland," the Looney Tunes cartoon "Porkys Poor Fish," and a 20-minute featurette "The Sea Hawk: Flynn in Action" about the production of film.

The music was written by composer Erich Wolfgang Korngold. When The Sea Hawk opened in theatres, a commercial recording was not contemplated. It was not until 22 years later, in 1962, that a bit of music from the film was released on an LP called Music by Erich Wolfgang Korngold. Ten years later Charles Gerhardt and Korngolds son, George, included 6:53 minutes of The Sea Hawk score (newly recorded) in RCAs album The Classic Film Scores of Erich Wolfgang Korngold. As of today there are numerous re-recordings containing portions of the score. A complete re-recording was issued in 2007 by the Naxos label, recorded with the Moscow Symphony Orchestra and Chorus led by William T. Stromberg and reconstructed by John W. Morgan.

Bosley Crowther wrote in the New York Times of 10 August 1940, "Of course, [the film] is all historically cockeyed, and the amazing exploits of Mr. Flynn, accomplished by him in the most casual and expressionless manner, are quite as incredible as the adventures of Dick Tracy. But Flora Robson makes an interesting Queen Elizabeth, Claude Rains and Henry Daniell play a couple of villainous conspirators handsomely, there is a lot of brocaded scenery and rich Elizabethan costumes and, of course, there is Brenda Marshall to shed a bit of romantic light. And, when you come right down to it, thats about all one can expect in an overdressed spectacle film which derives much more from the sword than from the pen."

Time magazine of 19 August 1940 observed, "The Sea Hawk (Warner) is 1940s lustiest assault on the double feature. It cost $1,700,000, exhibits Errol Flynn and 3,000 other cinemactors performing every imaginable feat of spectacular derring-do, and lasts two hours and seven minutes...Produced by Warners Hal Wallis with a splendor that would set parsimonious Queen Besss teeth on edge, constructed of the most tried-&-true cinema materials available, The Sea Hawk is a handsome, shipshape picture. To Irish (sic) Cinemactor Errol Flynn, it gives the best swashbuckling role he has had since Captain Blood. For Hungarian Director Michael Curtiz, who took Flynn from bit-player ranks to make Captain Blood and has made nine pictures with him since, it should prove a high point in their profitable relationship."

The film was re-released to great popularity in 1947.

It was one of the most popular films that screened in France in 1947.

The film was nominated for four Academy Awards: