An animated adaptation of J.R.R. Tolkiens tale of the adventures of a hobbit on a quest to regain a dwarf kings gold. 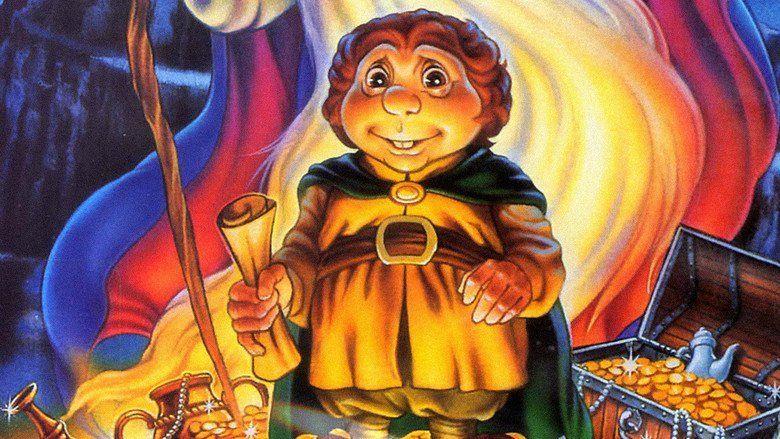 The Hobbit is a 1977 animated musical television special created by Rankin/Bass, a studio known for their holiday specials, and animated by Topcraft, a precursor to Studio Ghibli, using lyrics adapted from the book. The film is an adaptation of the 1937 book of the same name by J. R. R. Tolkien and was first broadcast on NBC in the United States on Sunday, November 27, 1977. 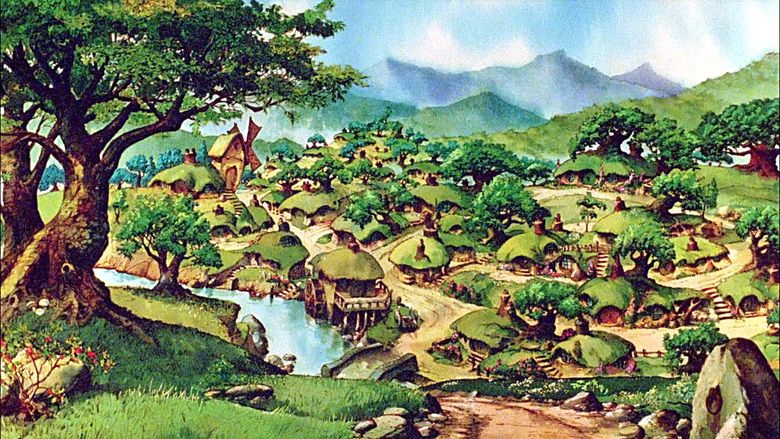 Bilbo Baggins the Hobbit was just minding his own business, when his occasional visitor Gandalf the Wizard drops in one night. One by one, a whole group of dwarves drop in, and before he knows it, Bilbo has joined their quest to reclaim their kingdom, taken from them by the evil dragon Smaug. The only problem is that Gandalf has told the dwarves that Bilbo is an expert burglar, but he isn't... 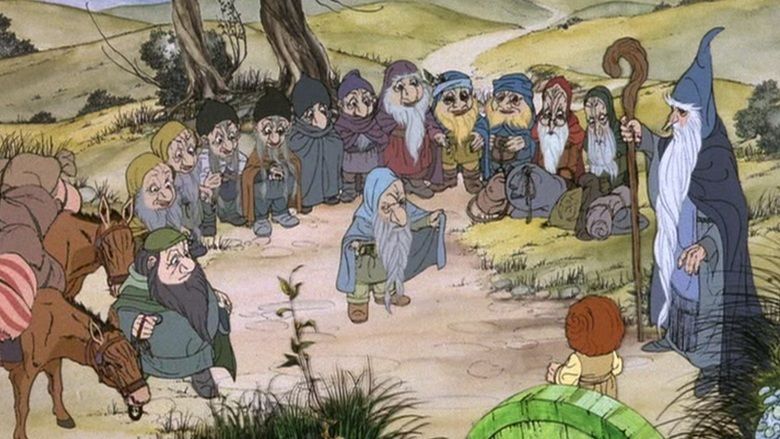 The plot of the animated production is in most respects similar to that of the book; but certain plot points are significantly compressed or removed due to the time limitations of the format. In addition, certain scenes are obviously edited for commercial breaks. In general, alterations are confined to simple omission of detail, and the plot adheres to the written text, including lyrics adapted from the songs in the book but in much longer and greater format. 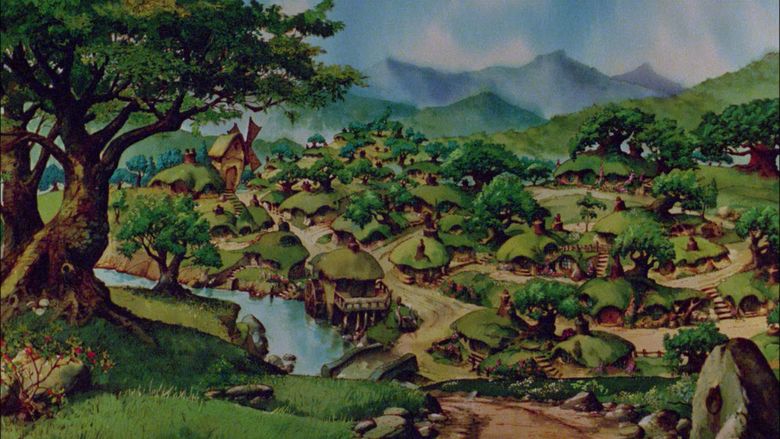 The film was produced and directed by Arthur Rankin, Jr. and Jules Bass of Rankin/Bass Productions and was adapted for the screen by Romeo Muller, with Rankin taking on the additional duties of production designer. When interviewed for the film, Rankin declared that he would add nothing to the story that wasnt in the original. The New York Times reported that The Hobbit cost $3 million. 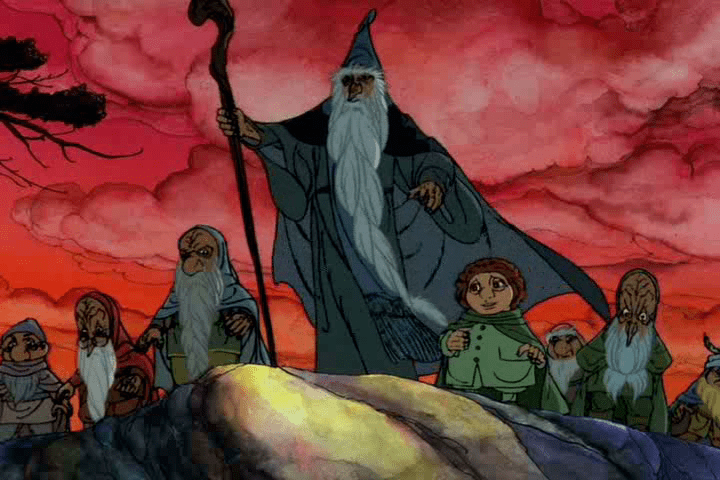 The storys hero, Bilbo Baggins, is voiced by Orson Bean, backed up by noted Hollywood director and actor John Huston as the voice of Gandalf. In supporting roles, the comedian and performance artist Brother Theodore was chosen for the voice of Gollum, and Thurl Ravenscroft performed the baritone singing voices of the goblins. The gravelly voice of the dragon Smaug was provided by Richard Boone, with Hans Conried as Thorin Oakensheild, rounding out the cast of primarily American voice actors.

The Hobbit was animated by Topcraft, a now-defunct Japanese animation studio whose animation team would re-form as Studio Ghibli under Hayao Miyazaki. Topcraft successfully partnered with Rankin/Bass on several other co-productions, including The Last Unicorn. According to Rankin, the visual style of the film took its basic cue from the early illustrations of Arthur Rackham. 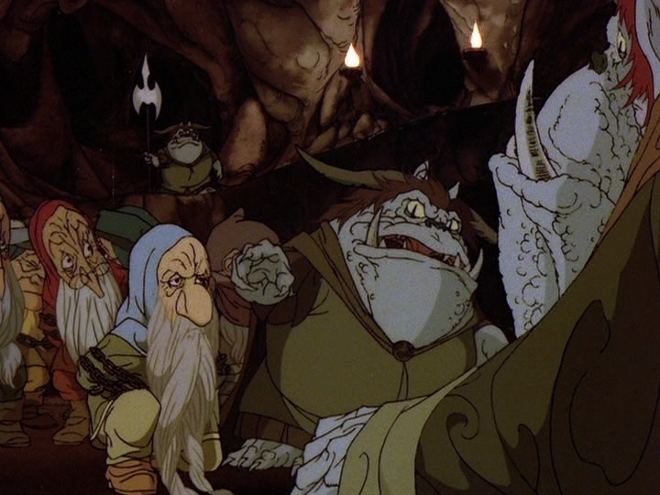 While Topcraft produced the animation, the concept artwork was completed in the US under the direction of Arthur Rankin. Principal artists included coordinating animator Toru Hara; supervising animator/character designer Tsuguyuki Kubo; character and effects animators Hidetoshi Kaneko and Kazuko Ito; and background designer Minoru Nishida. The same studio and crew members were also used for The Return of the King. 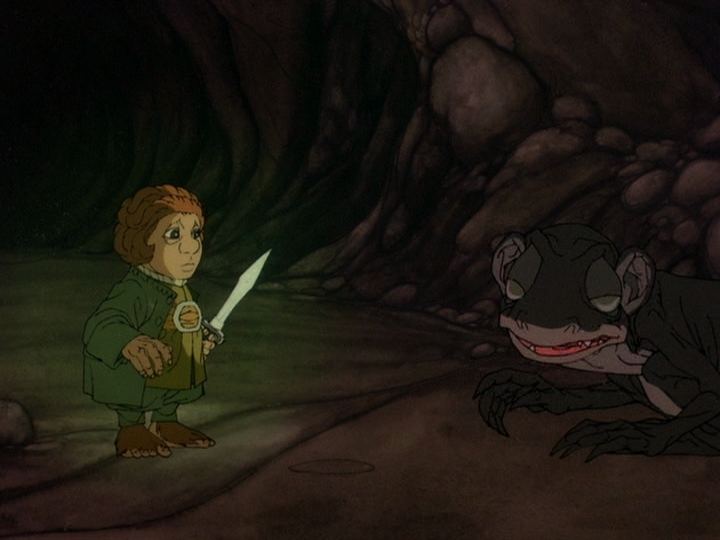 Jules Bass primarily adapted Tolkiens original lyrics for the films musical interludes, drawn primarily from the songs that feature prominently in the book. He also assisted Maury Laws, Rankin/Basss composer and conductor-in-residence, in the composition of an original theme song, "The Greatest Adventure (The Ballad of the Hobbit)", sung by Glenn Yarbrough as the sole original song written for the film. This folk ballad came to be associated with Yarbrough, who reprised it in the soundtrack to 1980 animated film The Return of the King.

The Hobbit first aired as an animated television special in 1977 with the goal of producing an accompanying tie-in storybook and song recordings for children, as in other Rankin/Bass productions.

The Hobbit was released on LP with the soundtrack and dialogue from the film was also released in 1977 by Disney through its Buena Vista Records Label, and an edited version, along with accompanying "storyteller read-alongs", was later issued for the Mouse Factorys Disneyland Records imprint. A second music album by Glenn Yarbrough of music "inspired" by The Hobbit was also released.

Comparison to the source material

While the script adheres fairly closely to the book, several significant plot points are altered or missing:

Although the majority of visual stylistic choices mostly drew on the book for some inspiration and detail illustrations, the characters of the wood elves are inexplicably given green (or purple) skin, short stature, blond hair, and Otto Premingers German accent; highly unlike the more typical elves of Rivendell, such as Elrond.

In depicting Gollum, the animators emphasize his more monstrous and amphibian appearance in Tolkiens early descriptions of the character, although retaining a humanoid form and a tortured personality familiar to readers. The "Hobbit scale" of his design would become more apparent in Rankin/Basss artwork for The Return of the King (1980 film). Gollums own dialogue and riddles are included largely intact (one is included as background music, with the accompanying lyrics chanted by a female chorus, presumably under the direction of choral director Lois Winter).

In 1978, Romeo Muller won a Peabody Award for his teleplay for The Hobbit. The film was also nominated for the Hugo Award for Best Dramatic Presentation, but lost to Star Wars. A few days before its first airing, John J. OConnor wrote in The New York Times that "Rankin and Bass Productions have now carefully translated The Hobbit into film. The result is curiously eclectic, but filled with nicely effective moments. […] The drawings frequently suggest strong resemblances to non-Tolkien characters… The goblins could have stepped out of a Maurice Sendak book. But […] the Dragon and Gollum the riddle aficionado bring some clever original touches… Whatever its flaws, this television version of The Hobbit warrants attention."

Critics primarily focused on adaptation issues, including the unfamiliar style of artwork used by the Japanese-American co-production team, whereas some Tolkien fans questioned the appropriateness of repackaging the material as a family film for a very young audience. Douglas A. Anderson, a Tolkien scholar, called the adaptation "execrable" in his own introduction to the Annotated Hobbit, although he did not elaborate; and a few critics said it was confusing for those not already familiar with the plot. On the other hand, critic Tom Keogh praised the adaptation as "excellent", saying the work received "big points" for being "faithful to Tolkiens story" and that the "vocal cast cant be improved upon."

Review aggregate website Rotten Tomatoes, which compiles reviews from a wide range of critics, gives the film a score of 67%.

The Hobbit was released by ABC Video Enterprises in the early 1980s on Betamax and VHS by Sony, and CED by RCA. Warner Home Video released the film on VHS in 1991, again in 1996 (as part of the Warner Bros. Classic Tales VHS line), and on DVD in 2001 (through Warner Bros. Family Entertainment). Parade Video released the film on DVD and VHS in 2004. The earlier 1980s and 1990s videocassette releases contain sound effects that were edited out of the 2001 DVD without explanation.

The film was also released on DVD by Warner Bros. as part of the DVD trilogy boxed set, which includes Ralph Bakshis The Lord of the Rings and the Rankin Bass production of The Return of the King. The Warner Bros. edition DVD is now out of print, though a remastered deluxe edition DVD was released on July 22, 2014. Sound effects missing in previous DVD releases are absent from this release as well.

Before The Hobbit ever aired on NBC, Rankin/Bass and its partner animation houses were preparing a sequel. Meanwhile, United Artists released J.R.R. Tolkiens The Lord of the Rings in 1978, an animated adaptation directed by Ralph Bakshi, originally intended as the first part in a two-part film.

Their own sequel having been cancelled after a disagreement with Bakshi, Rankin/Bass proceeded with their plans to produce their own television installment of The Lord of the Rings, bringing back most of the animation team and voice cast. Taking elements from the last volume of The Lord of the Rings which had not been used by Bakshi, they developed the musical The Return of the King. They were unable to provide continuity for the missing segments, developing instead of a framing device in which both films begin and end with Bilbos stay at Rivendell, connecting the later film directly to the better-received Hobbit.