Syracuse ( Italian: , Sicilian: ; Latin: ; Ancient Greek: , Syrakousai; medieval Greek: ) is a historic city in Sicily, the capital of the province of Syracuse. The city is notable for its rich Greek history, culture, amphitheatres, architecture, and as the birthplace of the preeminent mathematician and engineer Archimedes. This 2,700-year-old city played a key role in ancient times, when it was one of the major powers of the Mediterranean world. Syracuse is located in the southeast corner of the island of Sicily, right by the Gulf of Syracuse next to the Ionian Sea.

The city was founded by Ancient Greek Corinthians and Teneans and became a very powerful city-state. Syracuse was allied with Sparta and Corinth and exerted influence over the entirety of Magna Graecia, of which it was the most important city. Described by Cicero as "the greatest Greek city and the most beautiful of them all", it equaled Athens in size during the fifth century BC. It later became part of the Roman Republic and Byzantine Empire. After this Palermo overtook it in importance, as the capital of the Kingdom of Sicily. Eventually the kingdom would be united with the Kingdom of Naples to form the Two Sicilies until the Italian unification of 1860.

In the modern day, the city is listed by UNESCO as a World Heritage Site along with the Necropolis of Pantalica. In the central area, the city itself has a population of around 125,000 people. The inhabitants are known as Siracusans. Syracuse is mentioned in the Bible in the Acts of the Apostles book at 28:12 as Paul stayed there. The patron saint of the city is Saint Lucy; she was born in Syracuse and her feast day, Saint Lucys Day, is celebrated on 13 December.

Syracuse and its surrounding area have been inhabited since ancient times, as shown by the findings in the villages of Stentinello, Ognina, Plemmirio, Matrensa, Cozzo Pantano and Thapsos, which already had a relationship with Mycenaean Greece. 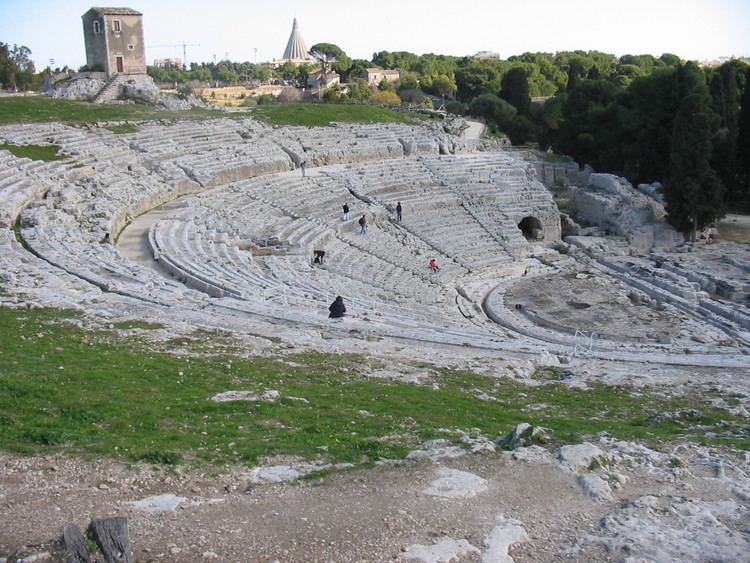 Syracuse was founded in 734 or 733 BC by Greek settlers from Corinth and Tenea, led by the oecist (colonizer) Archias. There are many attested variants of the name of the city including Syrakousai, Syrakosai and Syrako. A possible origin of the citys name was given by Vibius Sequester citing first Stephanus Byzantius in that there was a Syracusian marsh () called Syrako and secondly Marcians Periegesis wherein Archias gave the city the name of a nearby marsh; hence one gets Syrako (and thereby Syrakousai and other variants) for the name of Syracuse, a name also attested by Epicharmus. The nucleus of the ancient city was the small island of Ortygia. The settlers found the land fertile and the native tribes to be reasonably well-disposed to their presence. The city grew and prospered, and for some time stood as the most powerful Greek city anywhere in the Mediterranean. Colonies were founded at Akrai (664 BC), Kasmenai (643 BC), Akrillai (7th century BC), Helorus (7th century BC) and Kamarina (598 BC).

The descendants of the first colonists, called Gamoroi, held power until they were expelled by the Killichiroi, the lower class of the city. The former, however, returned to power in 485 BC, thanks to the help of Gelo, ruler of Gela. Gelo himself became the despot of the city, and moved many inhabitants of Gela, Kamarina and Megera to Syracuse, building the new quarters of Tyche and Neapolis outside the walls. His program of new constructions included a new theatre, designed by Damocopos, which gave the city a flourishing cultural life: this in turn attracted personalities as Aeschylus, Ario of Metimma, Eumelos of Corinth and Sappho, who had been exiled here from Mytilene. The enlarged power of Syracuse made unavoidable the clash against the Carthaginians, who ruled western Sicily. In the Battle of Himera, Gelo, who had allied with Theron of Agrigento, decisively defeated the African force led by Hamilcar. A temple dedicated to Athena (on the site of todays Cathedral), was erected in the city to commemorate the event

Syracuse grew considerably during this time. Its walls encircled 120 hectares (300 acres) in the fifth century, but as early as the 470s BC the inhabitants started building outside the walls. The complete population of its territory approximately numbered 250,000 in 415 BC and the population size of the city itself was probably similar to Athens.

Gelo was succeeded by his brother Hiero, who fought against the Etruscans at Cumae in 474 BC. His rule was eulogized by poets like Simonides of Ceos, Bacchylides and Pindar, who visited his court. A democratic regime was introduced by Thrasybulos (467 BC). The city continued to expand in Sicily, fighting against the rebellious Siculi, and on the Tyrrhenian Sea, making expeditions up to Corsica and Elba. In the late 5th century BC, Syracuse found itself at war with Athens, which sought more resources to fight the Peloponnesian War. The Syracusans enlisted the aid of a general from Sparta, Athens foe in the war, to defeat the Athenians, destroy their ships, and leave them to starve on the island (see Sicilian Expedition). In 401 BC, Syracuse contributed a force of 3,000 hoplites and a general to Cyrus the Youngers Army of the Ten Thousand.

Then in the early 4th century BC, the tyrant Dionysius the Elder was again at war against Carthage and, although losing Gela and Camarina, kept that power from capturing the whole of Sicily. After the end of the conflict Dionysius built a massive fortress on Ortygia and 22 km-long walls around all of Syracuse. Another period of expansion saw the destruction of Naxos, Catania and Lentini; then Syracuse entered again in war against Carthage (397 BC). After various changes of fortune, the Carthaginians managed to besiege Syracuse itself, but were eventually pushed back by a pestilence. A treaty in 392 BC allowed Syracuse to enlarge further its possessions, founding the cities of Adranon, Tyndarion and Tauromenos, and conquering Rhegion on the continent. In the Adriatic, to facilitate trade, Dionysius the Elder founded Ancona, Adria and Issa. Apart from his battle deeds, Dionysius was famous as a patron of art, and Plato himself visited Syracuse several times.

His successor was Dionysius the Younger, who was however expelled by Dion in 356 BC. But the latters despotic rule led in turn to his expulsion, and Dionysius reclaimed his throne in 347 BC. Dionysius was besieged in Syracuse by the Syracusan general Hicetas in 344 BC. The following year the Corinthian Timoleon installed a democratic regime in the city after he exiled Dionysius and defeated Hicetas. The long series of internal struggles had weakened Syracuses power on the island, and Timoleon tried to remedy this, defeating the Carthaginians in the Battle of the Crimissus (339 BC).

After Timoleons death the struggle among the citys parties restarted and ended with the rise of another tyrant, Agathocles, who seized power with a coup in 317 BC. He resumed the war against Carthage, with alternate fortunes. He was besieged in Syracuse by the Carthaginians in 311 BC, but he escaped from the city with a small fleet. He scored a moral success, bringing the war to the Carthaginians native African soil, inflicting heavy losses to the enemy. The defenders of Syracuse destroyed the Carthaginian army which besieged them. However, Agathocles was eventually defeated in Africa as well. The war ended with another treaty of peace which did not prevent the Carthaginians from interfering in the politics of Syracuse after the death of Agathocles (289 BC). They laid siege to Syracuse for the fourth and last time in 278 BC. They retreated at the arrival of king Pyrrhus of Epirus, whom Syracuse had asked for help. After a brief period under the rule of Epirus, Hiero II seized power in 275 BC.

Hiero inaugurated a period of 50 years of peace and prosperity, in which Syracuse became one of the most renowned capitals of Antiquity. He issued the so-called Lex Hieronica, which was later adopted by the Romans for their administration of Sicily; he also had the theatre enlarged and a new immense altar, the "Hieros Ara", built. Under his rule lived the most famous Syracusan, the mathematician and natural philosopher Archimedes. Among his many inventions were various military engines including the claw of Archimedes, later used to resist the Roman siege of 214 BC–212 BC. Literary figures included Theocritus and others.

Hieros successor, the young Hieronymus (ruled from 215 BC), broke the alliance with the Romans after their defeat at the Battle of Cannae and accepted Carthages support. The Romans, led by consul Marcus Claudius Marcellus, besieged the city in 214 BC. The city held out for three years, but fell in 212 BC. The successes of the Syracusians in repelling the Roman siege had made them overconfident. In 212 BC, the Romans received information that the citys inhabitants were to participate in the annual festival to their goddess Artemis. A small party of Roman soldiers approached the city under the cover of night and managed to scale the walls to get into the outer city and with reinforcements soon took control, killing Archimedes in the process, but the main fortress remained firm. After an eight-month siege and with parleys in progress, an Iberian captain named Moeriscus is believed to have let the Romans in near the Fountains of Arethusa. On the agreed signal, during a diversionary attack, he opened the gate. After setting guards on the houses of the pro-Roman faction, Marcellus gave Syracuse to plunder. 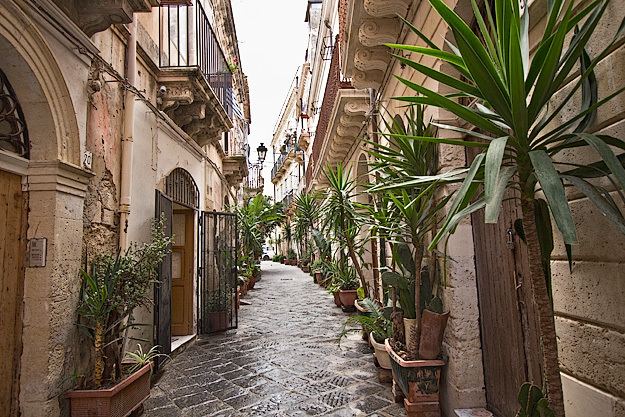 Since 2005, the entire city of Syracuse, along with the Necropolis of Pantalica which falls within the province of Syracuse, were listed as a World Heritage Site by UNESCO. This programme aims to catalogue, name and conserve sites of outstanding cultural or natural importance to the common heritage of humanity. The deciding committee which evaluates potential candidates described their reasons for choosing Syracuse because "monuments and archeological sites situated in Syracuse are the finest example of outstanding architectural creation spanning several cultural aspects; Greek, Roman and Baroque", following on that Ancient Syracuse was "directly linked to events, ideas and literary works of outstanding universal significance".