Stuttgart is spread across a variety of hills (many of them vineyards), valleys and parks – unusual for a German city and often a source of surprise to visitors who primarily associate the city with its industrial reputation as the cradle of the automobile. Stuttgart has the status of Stadtkreis, a type of self-administrating urban county. It is also the seat of the state legislature, the regional parliament, the local council and the Protestant State Church in Wurttemberg as well as one of the two co-seats of the bishop of the Roman Catholic Diocese of Rottenburg-Stuttgart.

The city of Stuttgart ranked 30th globally in Mercers 2010 liveability rankings, and 7th in Germany behind top-ranked cities such as Frankfurt, Dusseldorf and Munich. For economic and social innovation, the city was ranked 11th globally, second in Germany after Hamburg and 7th in Europe in 2009 out of 256 cities.

The citys tourism slogan is "Stuttgart offers more". Under current plans to improve transport links to the international infrastructure (as part of the Stuttgart 21 project), in March 2008 the city unveiled a new logo and slogan, describing itself as "" ("The new heart of Europe"). For business, it describes itself as "", "Where business meets the future"). In 2007, the Burgermeister marketed Stuttgart to foreign investors as "The creative power of Germany". In July 2010, Stuttgart unveiled a new city logo, designed to entice more business people to stay in the city and enjoy breaks in the area.

Stuttgart is nicknamed the Schwabenmetropole (Swabian metropolis), because of the citys location in the centre of Swabia, and as a reference to the Swabian dialect spoken by its native inhabitants. In that dialect, the citys name is pronounced Schtugert or Schtuagerd. However, many non-Swabian Germans have emigrated to Stuttgart for economic reasons and 40% of Stuttgarts residents, and 64% of the population below the age of five are of foreign immigrant background.

Stuttgart lies about an hour from the Black Forest and a similar distance from the Swabian Jura mountains. The city center lies in a lush valley, nestling between vineyards and thick woodland close by, but not on the River Neckar. Thus, the city is often described as lying "zwischen Wald und Reben", between forest and vines. In the hot summer months, local residents refer to this area as the Stuttgarter Kessel, or Stuttgart cauldron, for its hot and humid climate, which is frequently warmer than the surrounding countryside of Wurttemberg. 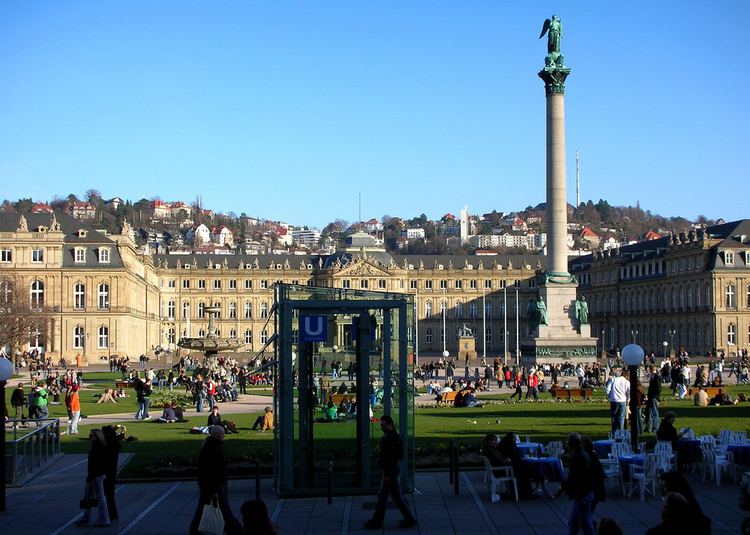 Stuttgart covers an area of 207 km2 (80 sq mi). The elevation ranges from 207 m (679 ft) above sea level by the Neckar river to 549 m (1,801 ft) on Bernhartshohe hill. As a result there are more than 400 flights of steps around the city (called "Staffele" in local dialect), equivalent to approximately 20 km (12 mi) of steps. Many originate from the time when vineyards lined the entire valley. Even today there are vineyards less than 500 m (1,640 ft) from the Main Station. 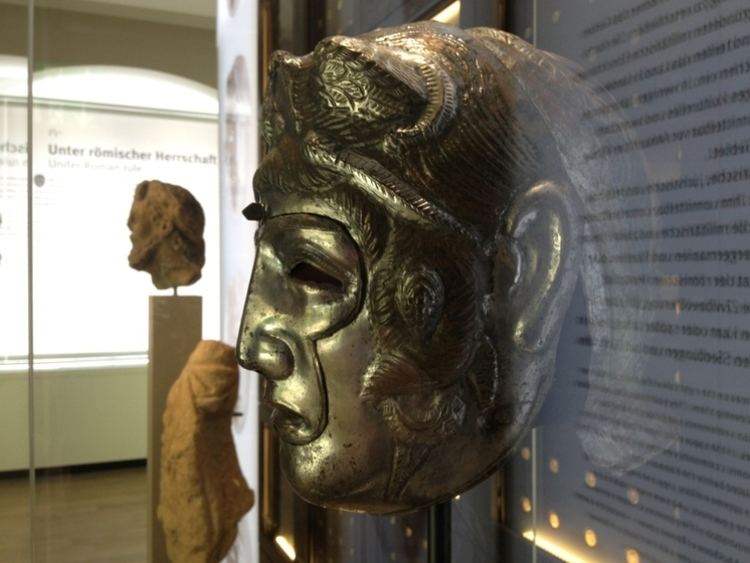 The first known settlement of Stuttgart was around the end of the 1st century AD with the establishment of a Roman fort on the banks of the river Neckar. Early in the 3rd century the Romans were pushed by the Alamanni back past the Rhine and the Danube. Nothing is known about the settlement between the 4th to 7th century, but Cannstatt is mentioned in Abbey of St. Gall archives dating back to the early 8th century. Archaeological excavations in the 2000s confirmed the continued presence of a farming estate during the Merovingian period. 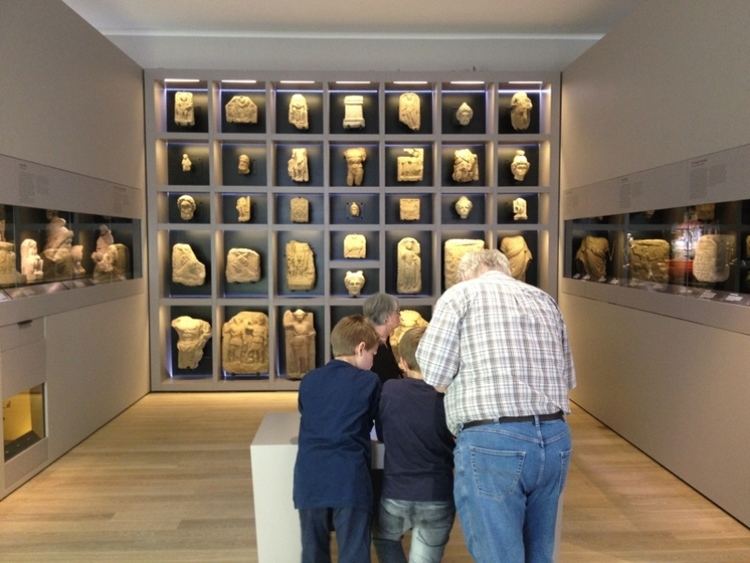 The name of the Roman fort is not recorded. The settlement is mentioned as Canstat ad Neccarum in 708. The etymology of the name Cannstatt is not clear, but as the site is mentioned as condistat in the Annals of Metz (9th century), it is mostly derived from Latin condita ("foundation"), suggesting that the name of the Roman settlement might have been in Condi-. Alternatively, Sommer (1992) suggested that the Roman site corresponds to the Civitas Aurelia G attested in an inscription found near Ohringen. There have also been attempts at a derivation from a Gaulish *kondati- "confluence".

The council of Cannstatt of 746 according to the annals of Metz, the annales Petaviani and an account by Childebrand, took place on the invitation by Carloman, the eldest son of Charles Martel, and ended in the summary execution of Alamannic nobility for their supposed part in the uprising of Theudebald, Duke of Alamannia and Odilo, Duke of Bavaria. 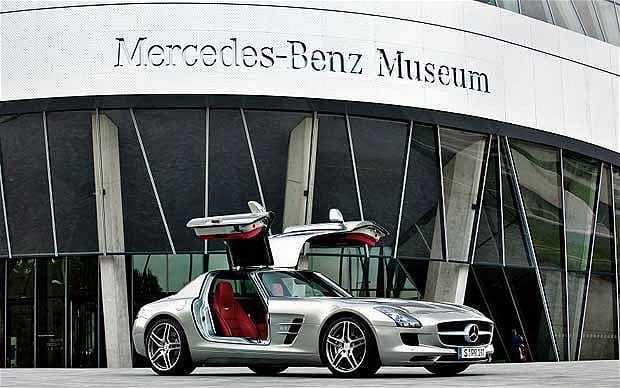 At the centre of Stuttgart lies its main square, Schlossplatz. As well as being the largest square in Stuttgart, it stands at the crossover point between the citys shopping area, Schlossgarten park which runs down to the river Neckar, Stuttgarts two central castles and major museums and residential areas to the south west. Konigstrase, Stuttgarts most important shopping street which runs along the northwestern edge of Schlossplatz, claims to be the longest pedestrianised street in Germany.

Although the city centre was heavily damaged during World War II, many historic buildings have been reconstructed and the city boasts some fine pieces of modern post-war architecture. Buildings and squares of note in the inner city include:

The Stuttgart area is known for its high-tech industry. Some of its most prominent companies include Daimler AG, Porsche, Bosch, Celesio, Hewlett-Packard and IBM – all of whom have their world or European headquarters here.

Stuttgart is home to five of the eleven state museums in Baden-Wurttemberg. The foremost of these is the Old State Gallery (opened in 1843, extended in 1984) which holds art dating from the 14th to 19th century including works by Rubens, Rembrandt, Monet, Renoir, Cezanne and Beuys. Next door to the Old State Gallery is the New State Gallery (1980) with its controversial modern architecture. Among others, this gallery houses works from Max Beckmann, Dali, Matisse, Miro, Picasso, Klee, Chagall and Kandinsky.

The Old Castle is also home to the State Museum of Wurttemberg which was founded in 1862 by William I of Wurttemberg. The museum traces the rich history of Wurttemberg with many artefacts from the its dukes, counts and kings, as well as earlier remants dating back to the stone age. On the Karlsplatz side of the Old Castle is a museum dedicated to the memory of Claus Schenk Graf von Stauffenberg, former resident of Stuttgart who attempted to assassinate Adolf Hitler on 20 July 1944.

Other leading museums in Stuttgart include: