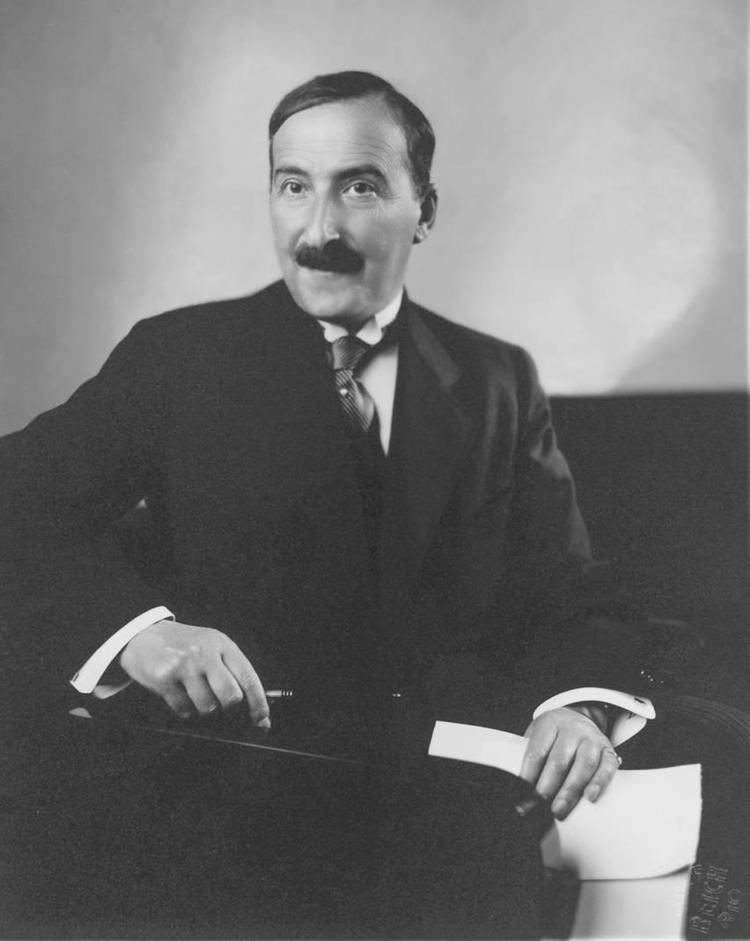 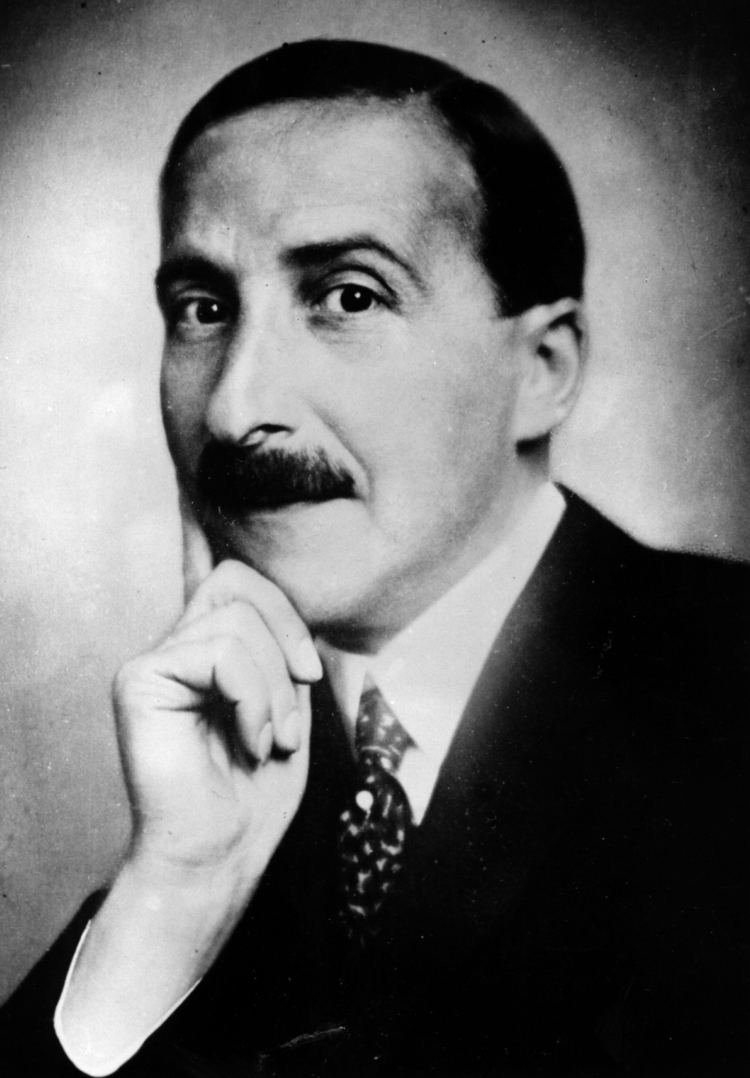 Zweig was born in Vienna, the son of Moritz Zweig (1845–1926), a wealthy Jewish textile manufacturer, and Ida Brettauer (1854–1938), a daughter of a Jewish banking family. He was related to the Czech writer Egon Hostovsky, who described him as "a very distant relative"; some sources describe them as cousins. Zweig studied philosophy at the University of Vienna and in 1904 earned a doctoral degree with a thesis on "The Philosophy of Hippolyte Taine". Religion did not play a central role in his education. "My mother and father were Jewish only through accident of birth," Zweig said later in an interview. Yet he did not renounce his Jewish faith and wrote repeatedly on Jews and Jewish themes, as in his story Buchmendel. Zweig had a warm relationship with Theodor Herzl, the founder of Zionism, whom he met when Herzl was still literary editor of the Neue Freie Presse, then Vienna's main newspaper; Herzl accepted for publication some of Zweig's early essays. Zweig believed in internationalism and in Europeanism, as The World of Yesterday, his autobiography, makes clear. According to Amos Elon, Zweig called Herzl's book Der Judenstaat an "obtuse text, [a] piece of nonsense". 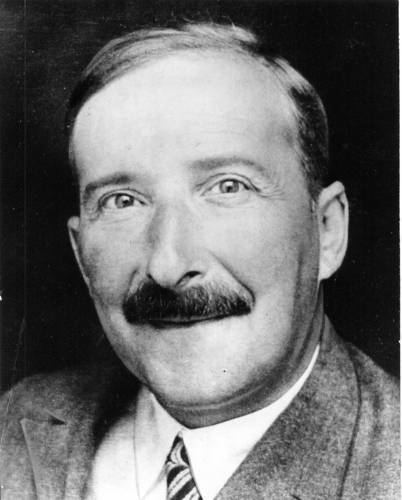 At the beginning of World War I, patriotic sentiment was widespread, and extended to many German and Austrian Jews: Zweig, as well as Martin Buber and Hermann Cohen, showed support. Zweig served in the Archives of the Ministry of War and adopted a pacifist stand like his friend Romain Rolland, recipient of the Nobel Prize in Literature 1915. Zweig married Friderike Maria von Winternitz (born Burger) in 1920; they divorced in 1938. As Friderike Zweig she published a book on her former husband after his death. She later also published a picture book on Zweig. In 1939, Zweig married his secretary Lotte Altmann. Zweig's secretary in Salzburg from November 1919 to March 1938 was Anna Meingast (13 May 1881, Vienna – 17 November 1953, Salzburg).

In 1934, following Hitler's rise to power in Germany, Zweig left Austria for England, living first in London, then from 1939 in Bath. Because of the swift advance of Hitler's troops westwards, Zweig and his second wife crossed the Atlantic to the United States, settling in 1940 in New York City.

On August 22, 1940, they moved again to Petropolis, a German-colonized mountain town 68 kilometers north of Rio de Janeiro known for historical reasons as Brazil's Imperial city. Feeling more and more depressed by the growth of intolerance, authoritarianism, and Nazism, and feeling hopeless for the future for humanity, Zweig wrote a note about his feelings of desperation. Then, in February 23, 1942, the Zweigs were found dead of a barbiturate overdose in their house in the city of Petropolis, holding hands. He had been despairing at the future of Europe and its culture. "I think it better to conclude in good time and in erect bearing a life in which intellectual labour meant the purest joy and personal freedom the highest good on Earth," he wrote.

The Zweigs' house in Brazil was later turned into a cultural centre and is now known as Casa Stefan Zweig.

Zweig was a prominent writer in the 1920s and 1930s, befriending Arthur Schnitzler and Sigmund Freud. He was extremely popular in the United States, South America and Europe, and remains so in continental Europe; however, he was largely ignored by the British public. His fame in America had diminished until the 1990s, when there began an effort on the part of several publishers (notably Pushkin Press, Hesperus Press, and The New York Review of Books) to get Zweig back into print in English. Plunkett Lake Press Ebooks began to publish electronic versions of his non-fiction works. Since that time there has been a marked resurgence and a number of Zweig's books are back in print.

Critical opinion of his oeuvre is strongly divided between those who despise his literary style as poor, lightweight and superficial, and those who praise his humanism, simplicity and effective style. Michael Hofmann is scathingly dismissive of Zweig's work, which he dubbed a "vermicular dither", adding that "Zweig just tastes fake. He's the Pepsi of Austrian writing." Even the author's suicide note left Hofmann gripped by "the irritable rise of boredom halfway through it, and the sense that he doesn't mean it, his heart isn't in it (not even in his suicide)".

Zweig is best known for his novellas (notably The Royal Game, Amok, and Letter from an Unknown Woman – which was filmed in 1948 by Max Ophuls), novels (Beware of Pity, Confusion of Feelings, and the posthumously published The Post Office Girl) and biographies (notably Erasmus of Rotterdam, Conqueror of the Seas: The Story of Magellan, and Mary, Queen of Scotland and the Isles and also posthumously published, Balzac). At one time his works were published without his consent in English under the pseudonym "Stephen Branch" (a translation of his real name) when anti-German sentiment was running high. His 1932 biography of Queen Marie Antoinette was adapted by Metro-Goldwyn-Mayer as a 1938 film starring Norma Shearer.

Zweig's memoir, The World of Yesterday, was completed in 1942 on the day before he committed suicide. It has been widely discussed as a record of "what it meant to be alive between 1881 and 1942" in central Europe; the book has attracted both critical praise and hostile dismissal.

Zweig enjoyed a close association with Richard Strauss, and provided the libretto for Die schweigsame Frau (The Silent Woman). Strauss famously defied the Nazi regime by refusing to sanction the removal of Zweig's name from the programme for the work's premiere on June 24, 1935 in Dresden. As a result, Goebbels refused to attend as planned, and the opera was banned after three performances. Zweig later collaborated with Joseph Gregor, to provide Strauss with the libretto for one other opera, Daphne, in 1937. At least one other work by Zweig received a musical setting: the pianist and composer Henry Jolles, who like Zweig had fled to Brazil to escape the Nazis, composed a song, "Ultimo poema de Stefan Zweig", based on "Letztes Gedicht", which Zweig wrote on the occasion of his 60th birthday in November 1941. During his stay in Brazil, Zweig wrote Brasilien, Ein Land der Zukunft (Brazil, Land of the Future) which was an accurate analysis of his newly adopted country; in this book he managed to demonstrate a fair understanding of the Brazilian culture that surrounded him.

Zweig was a passionate collector of manuscripts. There are important Zweig collections at the British Library, at the State University of New York at Fredonia and at the National Library of Israel. The British Library's Stefan Zweig Collection was donated to the library by his heirs in May 1986. It specialises in autograph music manuscripts, including works by Bach, Haydn, Wagner, and Mahler. It has been described as "one of the world's greatest collections of autograph manuscripts". One particularly precious item is Mozart's "Verzeichnus aller meiner Werke" – that is, the composer's own handwritten thematic catalogue of his works.

The 1993–1994 academic year at the College of Europe was named in his honour.

Artist Jeff Gabel created an English-language adaptation of Vierundzwanzig Stunden aus dem Leben einer Frau in a large-scale comic book format in 2004, titled 24 Hours in the Life of a Woman.

Beware of Pity was adapted into a 1946 film with the same title, directed by Maurice Elvey.

An adaptation by Stephen Wyatt of Beware of Pity was broadcast by BBC Radio 4 in 2011.

The 2013 French film A Promise (Une promesse) is based on Zweig's novella Journey into the Past (Reise in die Vergangenheit).

The 2013 Swiss film Mary Queen of Scots directed by Thomas Imbach is based on Zweig's Maria Stuart.

The end-credits for Wes Anderson's 2014 film The Grand Budapest Hotel say that the film was inspired in part by Zweig's novels. Anderson said that he had "stolen" from Zweig's novels Beware of Pity and The Post-Office Girl in writing the film, and it features actors Tom Wilkinson as The Author, a character based loosely on Zweig, and Jude Law as his younger, idealised self seen in flashbacks. Anderson also said that the film's protagonist, the concierge Gustave H., played by Ralph Fiennes, was based on Zweig. In the film's opening sequence, a teenaged girl visits a shrine for The Author, which includes a bust of him wearing Zweig-like spectacles and celebrated as his country's "National Treasure".