Frank is a retired Lt. Col. in the US army. Hes blind and impossible to get along with. Charlie is at school and is looking forward to going to college. To help pay for a trip home for Christmas, he agrees to look after Frank over Thanksgiving. Franks niece says this will be easy money, but she didnt reckon on Frank spending his Thanksgiving in New York. 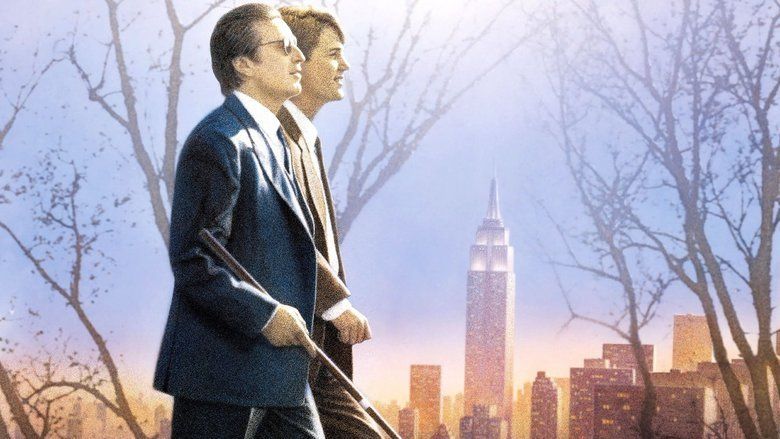 Scent of a Woman is a 1992 American drama directed and produced by Martin Brest that tells the story of a preparatory school student who takes a job as an assistant to an irascible, blind, medically retired Army officer. The film stars Al Pacino, Chris ODonnell, James Rebhorn, Philip Seymour Hoffman, and Gabrielle Anwar. It is a remake of Dino Risis 1974 Italian film Profumo di donna. Adapted by Bo Goldman from the novel Il buio e il miele (Italian: ) by Giovanni Arpino and from the 1974 screenplay by Ruggero Maccari and Dino Risi, the film was directed by Martin Brest. 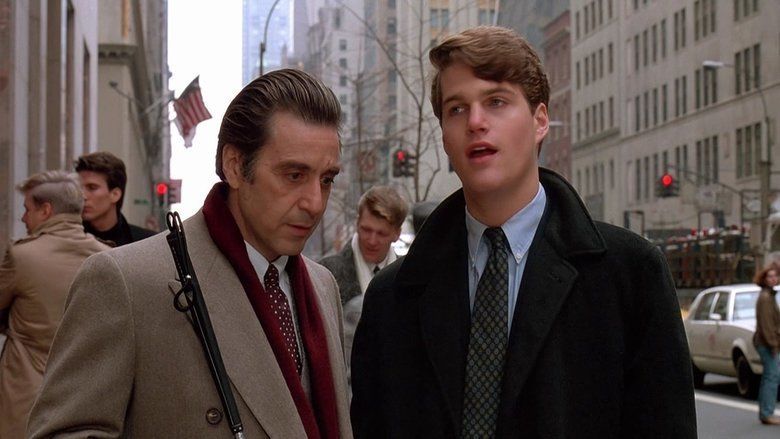 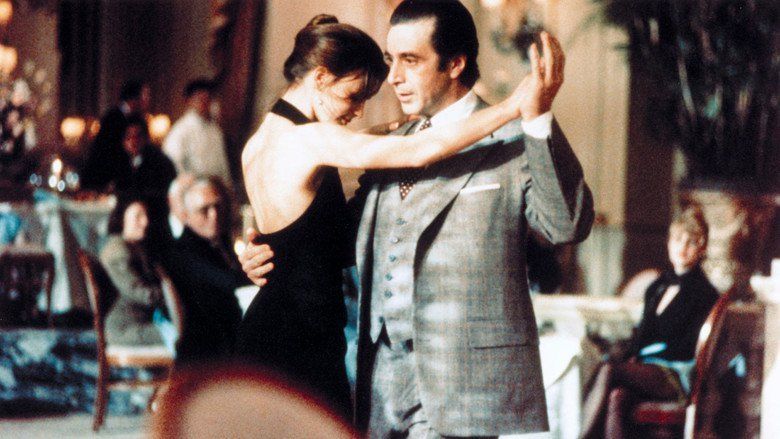 The film was shot primarily around New York state. Portions of the movie were filmed on location at Princeton University in Princeton, New Jersey; at the Emma Willard School, an all-girls school in Troy, New York; and at the Ethical Culture Fieldston School in New York City. 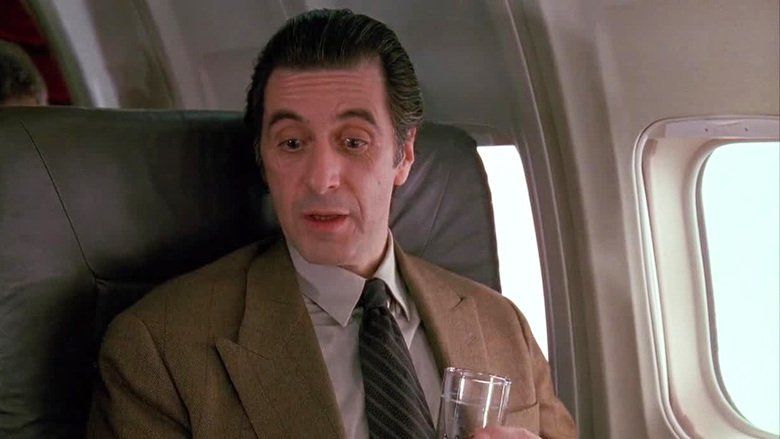 Charlie Simms (Chris O'Donnell) is a student at a private preparatory school who comes from a poor family. To earn the money for his flight home to Gresham, Oregon for Christmas, Charlie takes a job over Thanksgiving looking after retired U.S. Army officer Lieutenant Colonel Frank Slade (Al Pacino), a cantankerous middle-aged man who lives with his niece and her family. 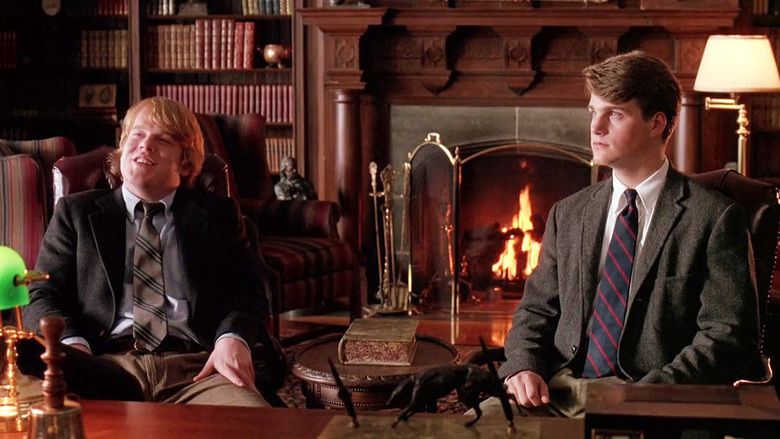 Charlie Simms is a student at an exclusive New England prep school. Unlike most of his peers, Charlie was not born to a wealthy family. To pay for a flight home to Oregon for Christmas, Charlie accepts a temporary job over Thanksgiving weekend looking after retired Army Ranger Lieutenant Colonel Frank Slade, whom Charlie discovers to be a cantankerous, blind alcoholic.

Charlie and George Willis, Jr., another student at the preparatory school, witness several students setting up a prank for the schools headmaster, Mr. Trask. Following the prank, Trask presses Charlie and George to divulge the names of the perpetrators. Trask offers Charlie a bribe, a letter of recommendation that would virtually guarantee his acceptance to Harvard. Charlie continues to remain silent but appears conflicted. 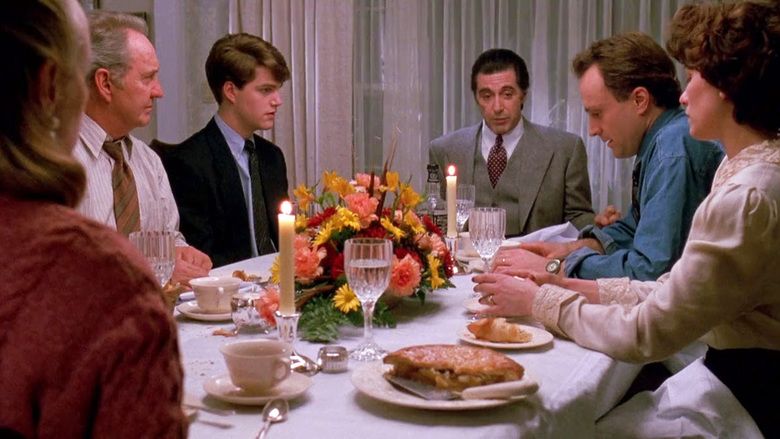 Shortly after Charlie arrives, Slade unexpectedly whisks Charlie off on a trip to New York City. Slade reserves a room at the Waldorf-Astoria. During dinner at the Oak Room Restaurant & Bar, Slade glibly states the goals of the trip, which involve enjoying luxurious accommodations in New York before committing suicide. Charlie is taken aback and does not know if Slade is serious. 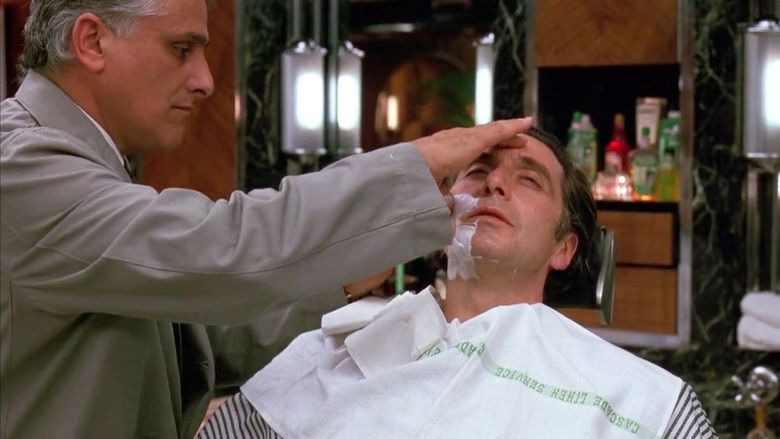 They pay an uninvited surprise visit to Slades brothers home in White Plains for Thanksgiving dinner. Slade is an unpleasant surprise for the family, as he deliberately provokes everyone and the night ends in acrimony. During this time the cause of Slades blindness is also revealed as a drunken trainee mishap with a grenade. 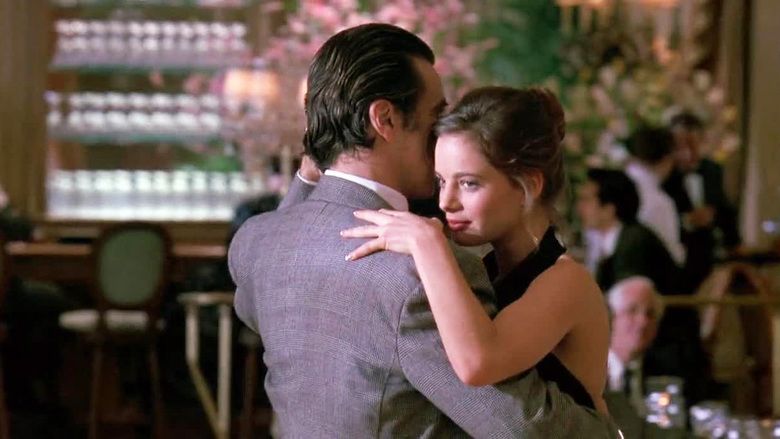 As they return to New York, Charlie tells Slade about his complications at school. Slade advises Charlie to inform on his classmates and go to Harvard, warning him that George will probably be pressured into not maintaining silence. Later at a restaurant, Slade is aware of Donna, a young woman waiting for her date. Although blind, Slade leads Donna in a spectacular tango ("Por una Cabeza") on the dance floor. That night, he hires a female escort. 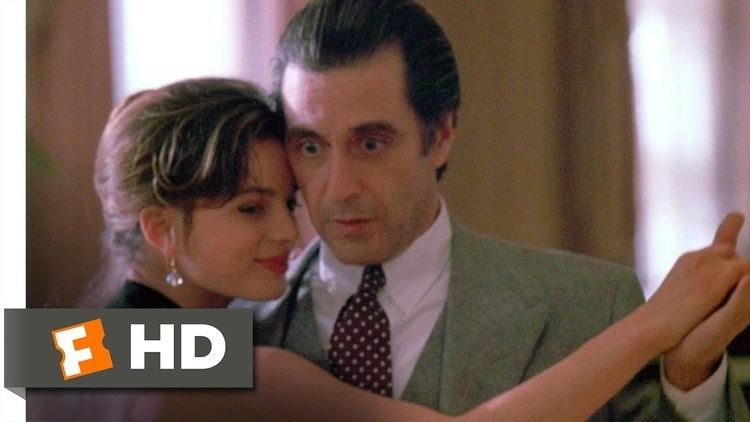 Deeply despondent the next morning, Slade responds to Charlies suggestion that they test drive a Ferrari Mondial t. Charlie lets Slade drive the car and Slade begins speeding, attracting the attention of a police officer, whom Slade manages to appease without giving away his blindness. 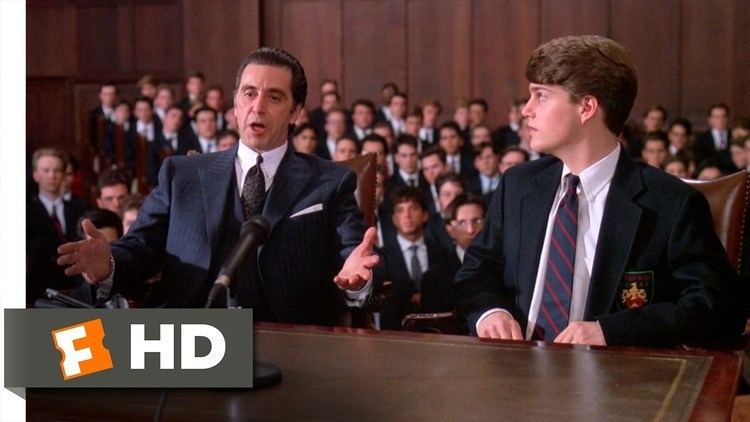 When they return to the hotel, Slade sends Charlie out on a list of errands. Charlie initially leaves the room but quickly becomes suspicious. Charlie returns to find Slade in his full-dress military uniform, preparing to commit suicide with a gun from which Charlie had made Slade promise to remove the bullets earlier, regarding which Slade states "I lied". Charlie intervenes and attempts to grab Slades gun. Slade, however, easily overpowers him, threatening to shoot Charlie before himself. They enter a tense argument, with both grappling for the gun; however, after Charlie bravely calms Slade, Slade backs down. 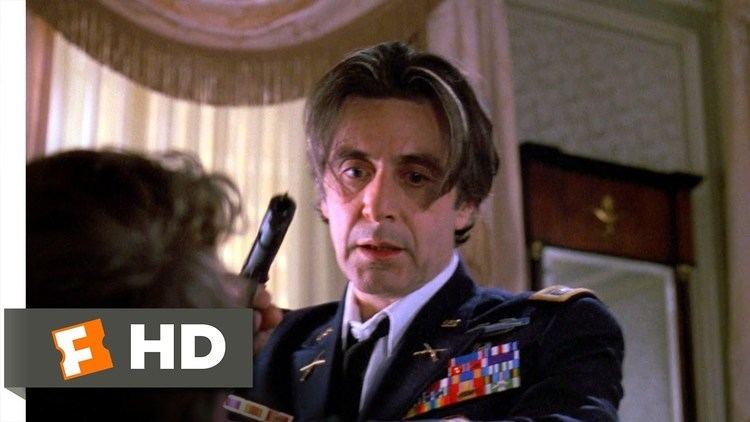 The two return to New England. At school, Charlie and George are subjected to a formal inquiry in front of the student body and the student/faculty disciplinary committee. As headmaster Trask is opening the proceedings, Slade unexpectedly returns to the school, joining Charlie on the auditorium stage for support. For his defense, George has enlisted the help of his wealthy father, and divulges the names of the perpetrators, qualifying that his vision was not clear. When pressed for more details, George passes the burden to Charlie. Although struggling with his decision, Charlie gives no information, so Trask recommends Charlies expulsion. 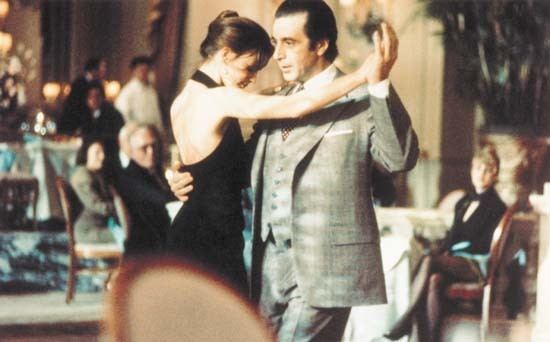 At this, Slade cannot contain himself and launches into a passionate speech defending Charlie and questioning the integrity of a system that rewards informing on classmates. He tells them that Charlie has shown integrity in his actions and insists the committee not expel him because this is what great leaders are made of, and promises he will make them proud in the future. The disciplinary committee decides to place on probation the students named by George, and to give George neither recognition nor commendation for his testimony. They excuse Charlie from any punishment and allow him to have no further involvement in the inquiries, to thunderous applause from the student body. 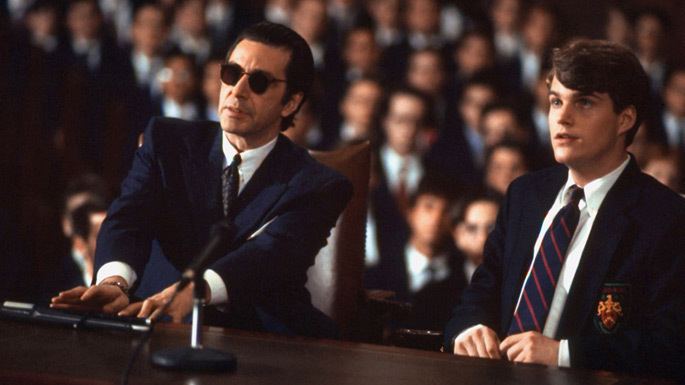 As Charlie escorts Slade to his limo, a female political science teacher, Christine Downes, who was part of the disciplinary committee, approaches Slade, commending him for his speech. Seeing a spark between them, Charlie tells Ms. Downes that Slade served on President Lyndon Johnsons staff. 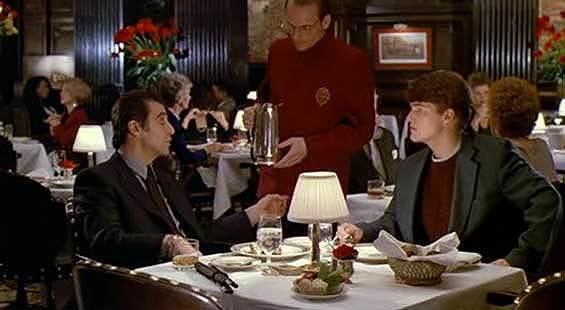 Charlie takes Slade home. The colonel walks towards his house and greets his nieces young children happily as Charlie watches by the limo.

Scent of a Woman was filmed in the following locations: 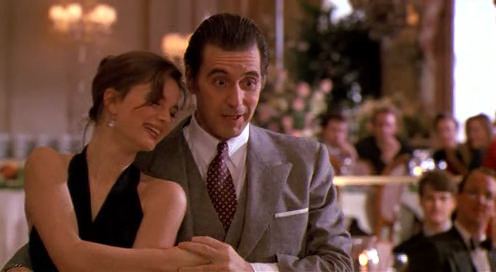 Scent of a Woman was released to a positive critical reception, with Pacino receiving rave reviews for his performance. The film holds an 88% approval rating on review aggregator Rotten Tomatoes, and Metascore of 59 out of 100 based on 14 critic reviews.

Pacino won an Academy Award for Best Actor, the first of his career after four previous nominations. 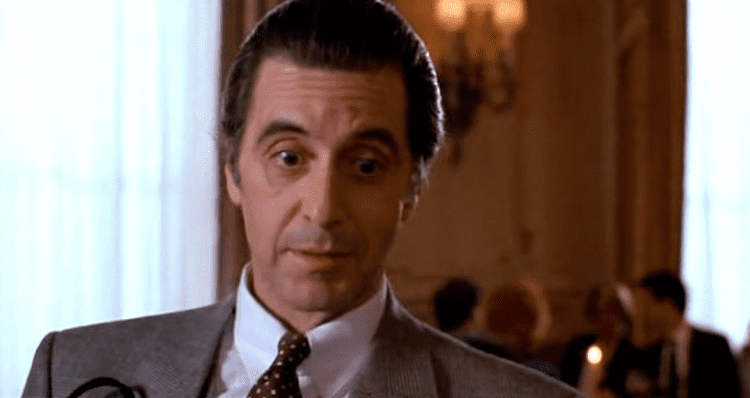 Some criticized the film for its length. Variety???s Todd McCarthy said it "goes on nearly an hour too long". Newsweek???s David Ansen believes that the "two-character conceit doesnt warrant a two-and-a-half-hour running time". 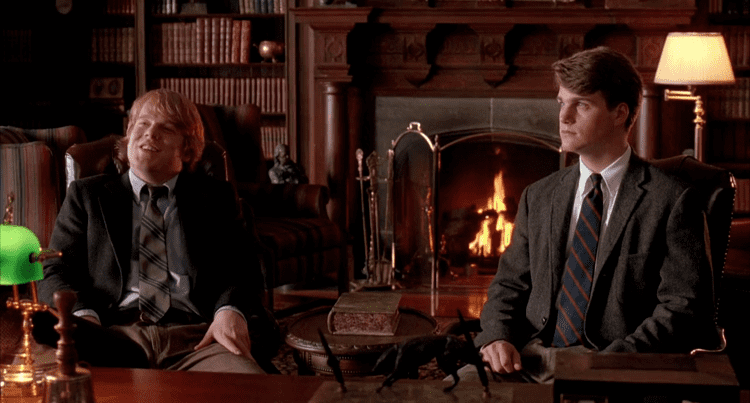