Salzburg ( Bavarian: ; literally: "Salt Fortress") is the fourth-largest city in Austria and the capital of the federal state of Salzburg.

Salzburgs "Old Town" (Altstadt) is internationally renowned for its baroque architecture and is one of the best-preserved city centers north of the Alps. It was listed as a UNESCO World Heritage Site in 1997. The city has three universities and a large population of students. Tourists also frequent the city to tour the citys historic center, many palaces, and the scenic Alpine surroundings.

Salzburg was the birthplace of 18th-century composer Wolfgang Amadeus Mozart. In the mid?20th century, the city was the setting for the musical play and film The Sound of Music.

Traces of human settlements have been found in the area, dating to the Neolithic Age. The first settlements in Salzburg continuous with the present were apparently by the Celts around the 5th century BC.

Around 15 BC the separate settlements were merged into one city by the Roman Empire. At this time, the city was called "Juvavum" and was awarded the status of a Roman municipium in 45 AD. Juvavum developed into an important town of the Roman province of Noricum. After the collapse of the Norican frontier, Juvavum declined so sharply that by the late 7th century it nearly became a ruin.

The Life of Saint Rupert credits the 8th-century saint with the citys rebirth. When Theodo of Bavaria asked Rupert to become bishop c. 700, Rupert reconnoitered the river for the site of his basilica. Rupert chose Juvavum, ordained priests, and annexed the manor Piding. Rupert named the city "Salzburg". He traveled to evangelise among pagans.

The name Salzburg means "Salt Castle" (Latin:Salis Burgium). The name derives from the barges carrying salt on the Salzach River, which were subject to a toll in the 8th century and was customary for many communities and cities on European rivers. The Festung Hohensalzburg, the citys fortress, was built in 1077 by Archbishop Gebhard, who made it his residence. It was greatly expanded during the following centuries.

Salzburg is on the banks of the Salzach River, at the northern boundary of the Alps. The mountains to Salzburgs south contrast with the rolling plains to the north. The closest alpine peak, the 1,972?metre-high Untersberg, is less than 16 kilometres (10 miles) from the city centre. The Altstadt, or "old town", is dominated by its baroque towers and churches and the massive Festung Hohensalzburg. This area is surrounded by two smaller mountains, the Mönchsberg and Kapuzinerberg, which offer green relief within the city. Salzburg is approximately 150 km (93 mi) east of Munich, 281 km (175 mi) northwest of Ljubljana, Slovenia, and 300 km (186 mi) west of Vienna.

In the 1960s, the movie The Sound of Music used some locations in and around Salzburg and the state of Salzburg. The movie was based on the true story of Maria von Trapp who took up with an aristocratic family and fled the German Anschluss. Although the film is not particularly popular nor well known among Austrians, the town draws many visitors who wish to visit the filming locations, alone or on tours. 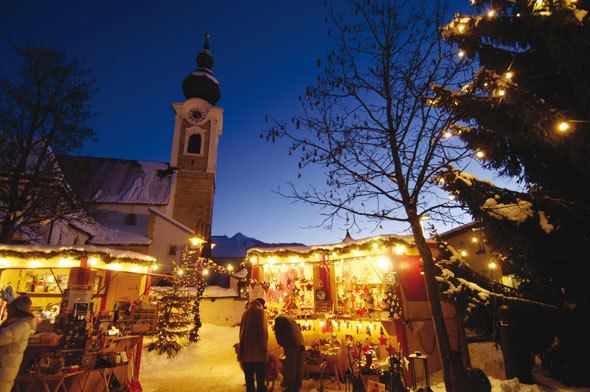 Salzburg is the setting for the Austrian crime series Stockinger.

In the 2010 film Knight & Day, Salzburg serves as the backdrop for a large portion of the film.