Ryan Benjamin Rowland-Smith (born 26 January 1983), is an Australian professional baseball pitcher who is currently a free agent. He has previously played in Major League Baseball for the Seattle Mariners and Arizona Diamondbacks. He also played in the Australian Baseball League for the Sydney Blue Sox. Rowland-Smith pitched for Australia in the 2006 World Baseball Classic and in the 2004 Summer Olympics. He was rated the number eight prospect in the Mariners organisation in 2008 by Baseball America. 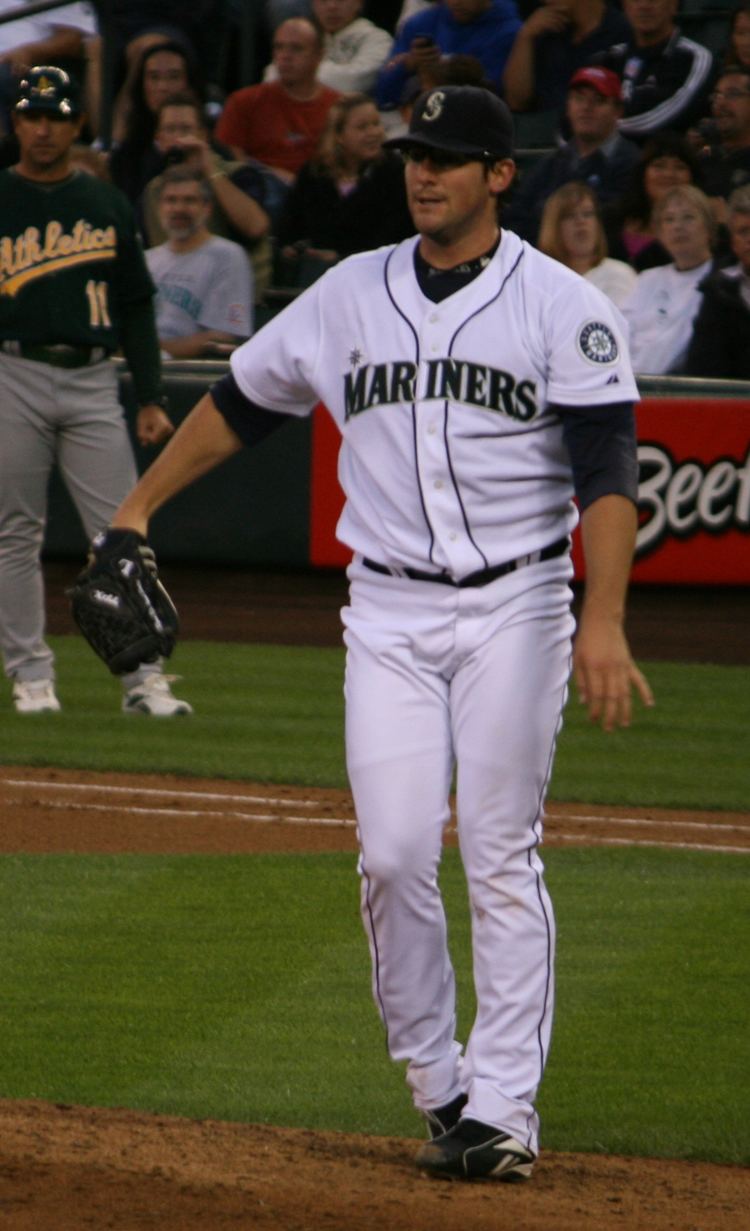 He graduated from Newcastle High School in Newcastle, New South Wales, Australia, in December 2000. Rowland-Smith was the first player from Newcastle to be signed to a professional contract, signing as a non-drafted free agent on 19 November 2000 by Mariners scout Barry Holland. He was the Newcastle Baseball Player of the Year as a 16 and 18-year-old. 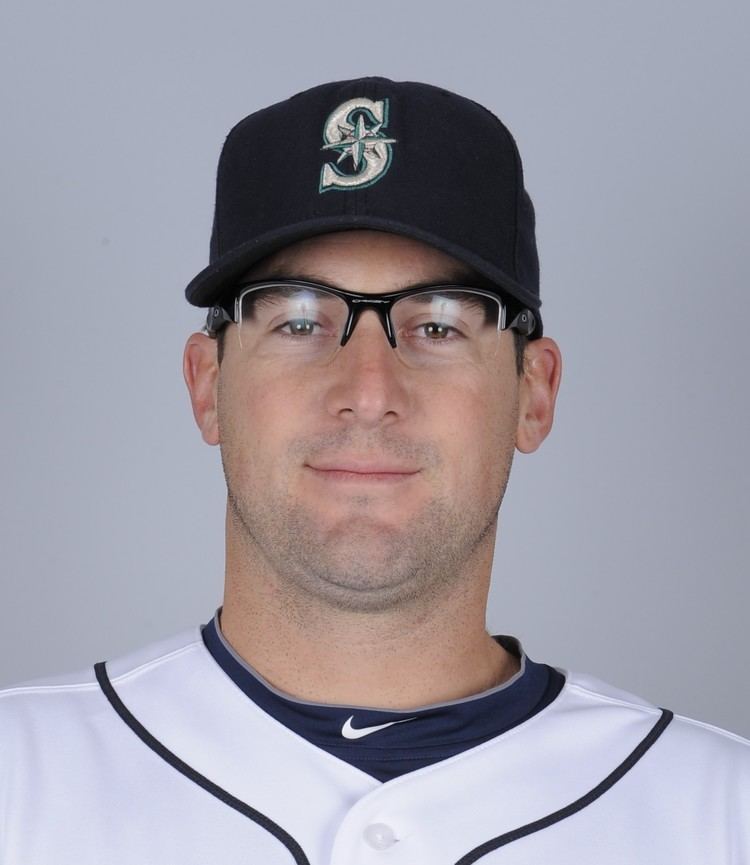 Rowland-Smith has played most of his career in the Mariners' organisation but he was selected by the Minnesota Twins in the Major League portion of the 2004 Rule 5 draft. He spent most of the 2004 spring training with the Twins before they returned him to Seattle. 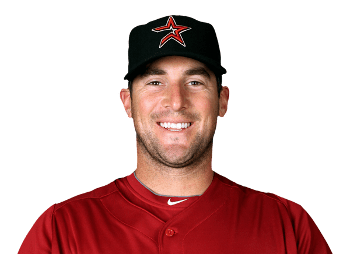 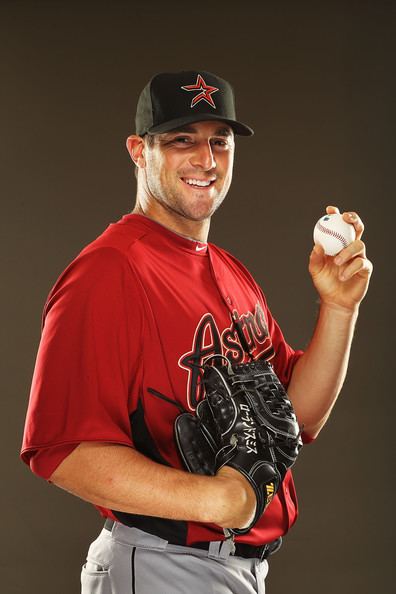 The Mariners signed Rowland-Smith in November, 2000. Rowland-Smith began his pro career in 2001 with the Rookie level Peoria Mariners of the Arizona League. He made 17 relief appearances, allowing just one home run in 33.1 innings pitched. He took part in the Mariners Arizona Instructional League at the end of the season. 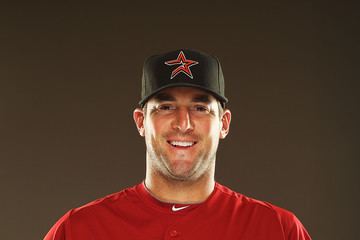 He split the 2002 season between the Single-A Wisconsin Timber Rattlers and the Short-season Everett AquaSox. He pitched in 12 games, 8 starts, with Wisconsin to begin the season. On 24 June, Rowland-Smith was transferred to Everett. He did not allow an earned run in six consecutive games from 6 to 24 July in 17.1 innings pitched. He finished the month of July 3–0 with 2 saves and a 0.70 ERA in 25.2 innings pitched. During his time with the AquaSox, Rowland-Smith was the third-youngest player on the roster. 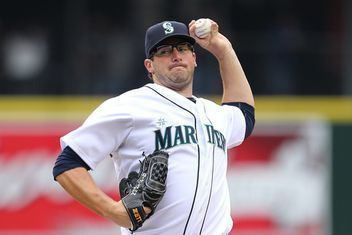 Rowland-Smith had a 1.90 ERA and 52 strikeouts combined between the Single-A Wisconsin Timber Rattlers and the Class-A Inland Empire 66ers. He began the 2003 season with Wisconsin appearing in 13 games. He did not allow an earned run 152⁄3 innings from 21 April to 13 May. He struck out a season-high six batters in 22⁄3 innings. He was named to the Midwest League All-Star team. Rowland-Smith was promoted to Inland Empire on 19 June and tossed 81⁄3 innings in seven games without allowing an earned run from 14 July to 9 August.

In the 2004 season played the entire season with the Class-A Inland Empire 66ers, appearing in 29 games. He split the season between the bullpen and starter, going 2–0 with three saves and a 4.15 ERA as a reliever and 3–3 with a 3.46 ERA as a starter. He struck out 119 batters in 992⁄3 innings. Rowland-Smith was tied for seventh among all Mariner farmhands in strikeouts. He held opponents to a .276 average, including a .246 clip against left-handers.

He played for Australia in 2004 Summer Olympic games, making four relief appearances, going 2–0 with a 1.23 ERA allowing only six hits and five walks while striking out 5. He helped the team to a silver medal. They made it to the championship game before falling to Cuba, 6–2. It was said that all of Rowland-Smith's teammates were paying close attention to the Olympic baseball gold-medal game.

He was returned to Seattle on 25 March. He spent the season with the Double-A San Antonio Missions, setting a career-high with 122.0 innings pitched. He went 2–2 with a 3.16 ERA in 16 relief appearances and 4–5 with a 4.76 ERA in 17 starts. He allowed three or fewer runs in 12 of 17 starts. He won back-to-back starts 2 and 8 May. Rowland smith struck out a season-high seven batters in 6.0 innings on 24 May. He was placed on the disabled list with tendinitis in right knee from 21 to 28 July. He tossed 12.2 innings in relief without allowing an earned run from 14 August to 4 September.

Rowland-Smith started the 2006 season on the disabled list with a left elbow strain. He was reinstated on 2 June. He did not allow an earned run in five of his seven appearances with the Class-A Inland Empire 66ers. He was called up to the Double-A San Antonio Missions on 21 June. He struck out a season-high 7 batters in 4.1 innings on 25 August. He went a season-high 11.1 consecutive innings pitched without allowing an earned run from 20 August to 2 September. Rowland-Smith limited opponents to a .241 batting average, including a .188 clip against left-handers. He was 0–1 with a 1.50 ERA and a save while striking out 23 batters in nine games in August. He played with the Peoria Javelinas in the Arizona Fall League.

At the start of the 2006 season, Rowland-Smith was added to the Australia national baseball team for the 2006 World Baseball Classic. He was also on the national team in 2004 that took home the silver in the Olympics. His time with the team was cut short after he suffered a sore elbow. Rowland-Smith will once again represent Australia in the 2013 World Baseball Classic.

He began season with Tacoma, making 25 relief appearances. Rowland-Smith made his major league debut for the Mariners on 22 June 2007, against the Cincinnati Reds at Safeco Field. He struck out the first batter he faced, Ken Griffey, Jr., and pitched 11⁄3 scoreless innings in a 16–1 Mariners loss. He did not allow a run in 10.2 consecutive innings spanning 5 games, from 22 to August31He allowed five hits while walking five and striking out 11 during this stretch. He allowed one hit while striking out five in 21⁄3 shut-out innings. He struck out 42 batters in 381⁄3 innings, including a career-high 6 batters in a career-high four scoreless innings 22 August against the Minnesota Twins. Rowland-Smith earned first career win 13 September against the Tampa Bay Devil Rays. He pitched for Lara in the Venezuelan Winter League at the end of the season. This is what Rowland-Smith said about pitching in the Venezuelan League:

Rowland-Smith began the season exclusively as a reliever, making 32 relief appearances before making two starts prior to the All-Star break. He made three more relief appearances before being optioned to the Triple-A Tacoma Rainiers on 20 July to begin conversion to starter. On 1 July he made first Major League start against the Toronto Blue Jays, tossing 3.2 innings, allowing 3 runs before being removed after 62 pitches, he allowed all 3 runs in the fourth inning. He recorded 8 consecutive quality starts from 21 August to 27 September the longest streak by a Mariners starter since Joel Pineiro tossed 8 consecutive quality starts in 2002. The streak was also tied for the 5th-longest in the AL in 2008. From 21 August until the end of the season, his 2.56 ERA was the best in the American League and tied for 4th-lowest amongst left-handed starters in the Majors behind C.C. Sabathia (1.72), Johan Santana, NYM (1.88) and Jorge De La Rosa, COL (2.34). Rowland-Smith collected his first Major League save 8 April against the Tampa Bay Rays in Seattle's 6–5 win, tossing 1.2 innings and retiring all five batters he faced, while protecting 1-run lead. As a reliever, had a 1.41 ERA in 17 games and 44 innings pitched when pitching. In Tacoma, he went 2–0 with a 2.89 ERA in 3 starts with the Rainiers, he held opponents to a .185 batting average.

Rowland-Smith started a 2009 spring training game against the Colorado Rockies, coming to the plate twice and singling both times. This was his first time batting against a live pitcher since he was 17 years old. He used teammate Jeff Clement's bat.

At the beginning of the season, he started one game before being placed on the disabled list. He was sent to the Mariners' Triple-A affiliate Tacoma Rainiers for rehab starts. After dismal starts he was optioned to Tacoma. On 24 July Rowland-Smith was called up and put in the starting rotation after going 5–3 with a 4.31 ERA in 10 starts. From that point on, Rowland-Smith got much praise for working out the kinks in his pitching. He said this about pitching in the minors:

Rowland-Smith finished the season with a 5–4 record not indicative of how well he pitched during the season due to six of his 15 games started ending in no decisions.

Despite an increase of ERA to 3.74 from last season, the left-handed pitcher was widely recognised as a vital part to the Mariners 2010 season and was labelled as the likely number three pitcher in the Mariners' rotation. In November 2010, Ryan was named on the Sydney Blue Sox 35-man roster for the inaugural Australian Baseball League season. He never played in the 2011 season. On 2 December 2010 the Mariners decided not to offer a new contract, thus allowing Rowland-Smith to become an unrestricted free agent. On 9 December 2010 the Houston Astros signed Rowland-Smith to a one-year contract.

On 2 February 2012, the Chicago Cubs signed Rowland-Smith to a minor league deal.

On 24 February 2013, the Boston Red Sox signed Rowland-Smith to a minor league deal.

Rowland-Smith signed a minor league contract with the Arizona Diamondbacks prior to the 2014 season. On 29 March, he made the Diamondbacks 25-Man Opening Day roster. He was designated for assignment on 18 April, and elected to become a free agent on 21 April.

On 25 April 2014, Rowland-Smith signed a minor league deal with the Toronto Blue Jays. He was assigned to the Triple-A Buffalo Bisons on 5 May. On 11 June, Rowland-Smith was released after allowing 8 runs in just 14 innings of work with Buffalo.

Rowland-Smith is the son of Australian celebrity trainer Rob Rowland-Smith, known as "The Sandhill Warrior". Rowland-Smith's older sister, Rhiannon, is a professional surfer. He himself is an avid surfer, and spends a lot of his time in the off-season in his native Australia surfing. Rowland-Smith's mother, Julie White, is a retired high school physical education teacher. His grandfather was a former New South Wales minister for sport and recreation. His parents divorced when he was three and along with his sister they lived with their mother in Newcastle. Growing-up, Rowland-Smith watched baseball on video cassettes because Major League Baseball was not carried on Australian networks back then. He is the first player with a hyphenated last name ever to appear in a major league game. He maintains his own blog and Twitter account to keep up with fans.