Rotterdam ( or ) is a city in South Holland, the Netherlands, located geographically within the Rhine–Meuse–Scheldt river delta at the North Sea. Its history goes back to 1270 when a dam was constructed in the Rotte river and people settled around it for safety. In 1340 Rotterdam was granted city rights by the Count of Holland and slowly grew into a major logistic and economic centre. Nowadays it is home to the Europes largest port and has a population of 624,799 (2014, city proper), ranking second in the Netherlands. The Greater Rotterdam area is home to approximately 1.3 million people and the Rotterdam The Hague Metropolitan Area area makes for the 168th most populous urban area in the world. Rotterdam is part of the yet larger Randstad conurbation with a total population of 7,100,000.

The city of Rotterdam is known for the Erasmus university, striking riverside setting, lively cultural life and its maritime heritage. The near-complete destruction of Rotterdams city centre during WW2 (known as the Rotterdam Blitz) has resulted in a varied architectural landscape including sky-scrapers, which are an uncommon sight in other Dutch cities. Rotterdam is home to some world-famous architecture from renowned architects like Rem Koolhaas, Piet Blom, Ben van Berkel and others. Recently Rotterdam was listed 8th in The Rough Guide Top 10 Cities to Visit and was voted 2015 European City of the Year by the Academy of Urbanism.

The port of Rotterdam is the largest cargo port in Europe and the 10th largest in the world. Rotterdams logistic success is based on its strategic location on the North Sea, directly at the mouth of the Nieuwe Maas (New Meuse) channel leading into the Rhine–Meuse–Scheldt delta. The rivers Rhine, Meuse and Scheldt give waterway access into the hearth of Western Europe, including the highly industrialized Ruhr region. The extensive distribution system including rail, roads and waterways have earned Rotterdam the nickname "Gateway to Europe", and, conversely; "Gateway to the World" in Europe. 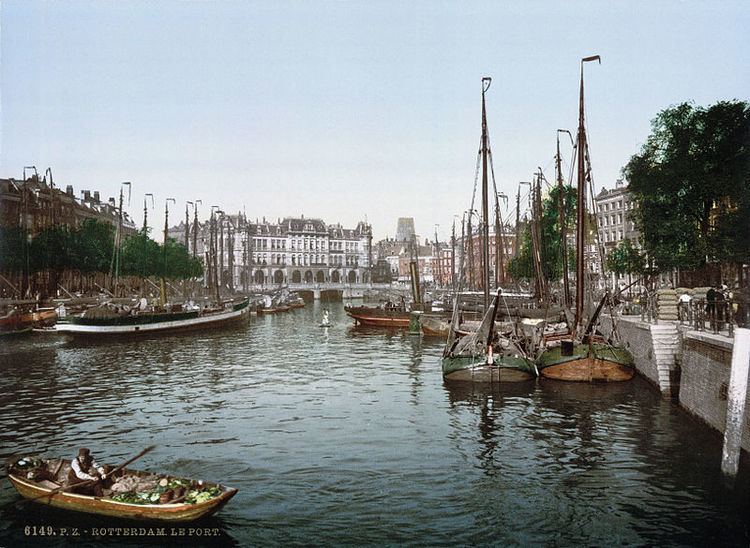 The settlement at the lower end of the fen stream Rotte (or Rotta, as it was then known, from rot, muddy and a, water, thus muddy water) dates from at least 900 CE. Around 1150, large floods in the area ended development, leading to the construction of protective dikes and dams, including Schielands Hoge Zeedijk (Schieland’s High Sea Dike) along the northern banks of the present-day Nieuwe Maas. A dam on the Rotte or Rotterdam was built in the 1260s and was located at the present-day Hoogstraat (High Street). 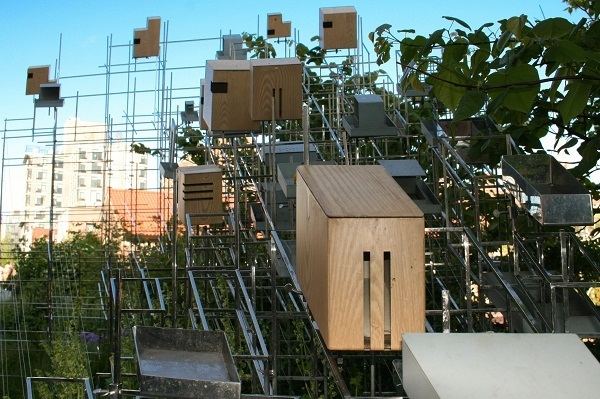 On 7 July 1340, Count Willem IV of Holland granted city rights to Rotterdam, which then had approximately 2,000 inhabitants. Around the year 1350, a shipping canal, the Rotterdamse Schie was completed, which provided Rotterdam access to the larger towns in the north, allowing it to become a local trans-shipment centre between the Netherlands, England and Germany, and to urbanize.

The port of Rotterdam grew slowly but steadily into a port of importance, becoming the seat of one of the six chambers of the Vereenigde Oostindische Compagnie (VOC), the Dutch East India Company.

The greatest spurt of growth, both in port activity and population, followed the completion of the Nieuwe Waterweg in 1872. The city and harbor started to expand on the south bank of the river. The Witte Huis or White House skyscraper, inspired by American office buildings and built in 1898 in the French Chateau-style, is evidence of Rotterdams rapid growth and success. When completed, it was the tallest office building in Europe, with a height of 45 m (147.64 ft).

During World War I the city was the worlds largest spy centre because of Dutch neutrality and its location in between England, Germany and occupied Belgium.

During World War II, the German army invaded the Netherlands on 10 May 1940. Adolf Hitler had hoped to conquer the country in just one day, but his forces met unexpectedly fierce resistance. The Dutch army was finally forced to capitulate on 15 May 1940, following Hitlers bombing Rotterdam on 14 May and threatening to bomb other Dutch cities. The heart of Rotterdam was almost completely destroyed by the Luftwaffe. Some 80,000 civilians were made homeless and 900 were killed; a relatively low number given that many had fled the city because of the warfare and bombing going on in Rotterdam since the start of the invasion three days earlier. The City Hall survived the bombing. Ossip Zadkine later attempted to capture the event with his statue De Verwoeste Stad (The Destroyed City). The statue stands near the Leuvehaven, not far from the Erasmusbrug in the centre of the city, on the north shore of the river Nieuwe Maas.

Rotterdam was gradually rebuilt from the 1950s through to the 1970s. It remained quite windy and open until the city councils from the 1980s on began developing an active architectural policy. Daring and new styles of apartments, office buildings and recreation facilities resulted in a more livable city centre with a new skyline. In the 1990s, the Kop van Zuid was built on the south bank of the river as a new business centre. Rotterdam was voted 2015 European City of the Year by the Academy of Urbanism.

Rotterdam is divided into a northern and a southern part by the river Nieuwe Maas, connected by (from west to east): the Beneluxtunnel; the Maastunnel; the Erasmusbrug (Erasmus Bridge); a subway tunnel; the Willemsspoortunnel (Willems railway tunnel); the Willemsbrug (Willems Bridge); the Koninginnebrug (Queens Bridge); and the Van Brienenoordbrug (Van Brienenoord Bridge). The former railway lift bridge De Hef (the Lift) is preserved as a monument in lifted position between the Noordereiland (North Island) and the south of Rotterdam. 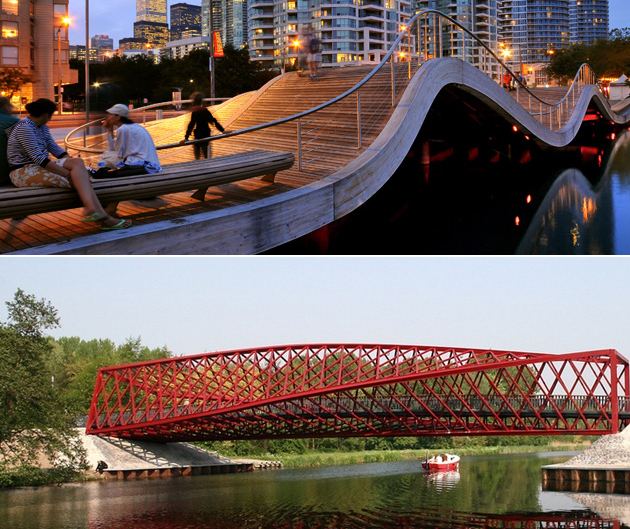 Built mostly behind dikes, large parts of the Rotterdam are below sea level. For instance, the Prins Alexander Polder in the northeast of Rotterdam extends 6 metres (20 ft) below sea level, or rather below Normaal Amsterdams Peil (NAP) or Amsterdam Ordnance Datum. The lowest point in the Netherlands (6.76 metres (22.2 ft) below NAP) is situated just to the east of Rotterdam, in the municipality of Nieuwerkerk aan den IJssel.

The Rotte river no longer joins the Nieuwe Maas directly. Since the early 1980s, when the construction of Rotterdam’s second subway line interfered with the Rotte’s course, its waters have been pumped through a pipe into the Nieuwe Maas via the Boerengat.

Between the summers of 2003 and 2008, an artificial beach was created at the Boompjeskade along the Nieuwe Maas, between the Erasmus Bridge and the Willems Bridge. Swimming was not possible, digging pits was limited to the height of the layer of sand, about 50 cm (20 in). Alternatively people go the beach of Hoek van Holland (which is a Rotterdam district) or one of the beaches in Zeeland: Renesse or the Zuid Hollandse Eilanden: Ouddorp, Oostvoorne.

Rotterdam forms the centre of the Rijnmond conurbation, bordering the conurbation surrounding The Hague to the north-west. The two conurbations are close enough to be a single conurbation. They share the Rotterdam The Hague Airport and a light rail system called RandstadRail. Consideration is being given to creating an official Metropolitan region Rotterdam The Hague (Metropoolregio Rotterdam Den Haag), which would have a combined population approaching 2.5 million.

On its turn, the Rijnmond conurbation is part of the southern wing (the Zuidvleugel) of the Randstad, which is one of the most important economic and densely populated areas in the north-west of Europe. Having a population of 7.1 million, the Randstad is the sixth-largest metropolitan area in Europe (after Moscow, London, the Ruhr Area, Istanbul, and Paris). The Zuidvleugel, situated in the province of South Holland, has a population of around 3 million.

Rotterdam has always been one of the main centres of the shipping industry in the Netherlands. From the Rotterdam Chamber of the VOC, the worlds first multinational, established in 1602, to the merchant shipping leader Royal Nedlloyd established in 1970, with its corporate headquarters located in the landmark building the Willemswerf in 1988. In 1997, Nedlloyd merged with the British shipping industry leader P&O forming the third largest merchant shipping company in the world. The Anglo-Dutch P&O Nedlloyd was bought by the Danish giant corporation AP Moller Maersk in 2005 and its Dutch operations are still headquartered in the Willemswerf.

Alongside Porto, Rotterdam was European Capital of Culture in 2001. The city has its own orchestra, the Rotterdam Philharmonic, with its well-regarded young music director Yannick Nezet-Seguin; a large congress and concert building called De Doelen; several theaters (including the new Luxor) and movie theatres; and the Ahoy Rotterdam complex in the south of the city, which is used for pop concerts, exhibitions, tennis tournaments, and other activities. A major zoo called Diergaarde Blijdorp is situated at the northwest side of Rotterdam, complete with a walkthrough sea aquarium called the Oceanium. The city is home to the Willem de Kooning Academy and Piet Zwart Institute.

Rotterdam features some urban architecture projects, nightlife, and many summer festivals celebrating the citys multicultural population and identity, such as the Caribbean-inspired "Summer Carnival", the Dance Parade, Rotterdam 666, the Metropolis pop festival and the World Port days. In the years 2005-2011 the city struggled with venues for popmusic. Many of the venues suffered severe financial problems. This resulted in the disappearance of the major music venues Nighttown and WATT and smaller stages such as Waterfront, Exit, and Heidegger. Currently the city has a few venues for pop music like Rotown, Poortgebouw. The venue WORM focuses on experimental music and related cutting edge subcultural music. There are also the International Film Festival in January, the Poetry International Festival in June, the North Sea Jazz Festival in July, the Valery Gergiev Festival in September, September in Rotterdam and the World of the Witte de With. In June 1970, The Holland Pop Festival (which featured Jefferson Airplane, The Byrds, Canned Heat, Its a Beautiful Day, and Santana) was held and filmed at the Stamping Grounds in Rotterdam.

There is a healthy competition with Amsterdam, which is often viewed as the cultural capital of the Netherlands. There is a saying: "Amsterdam to party, Den Haag (The Hague) to live, Rotterdam to work". Another one, more popular by Rotterdammers, is "Money is earned in Rotterdam, distributed in The Hague and spent in Amsterdam". Another saying that reflects both the rivalry between Rotterdam and Amsterdam is "Amsterdam has it, Rotterdam doesnt need it".

Rotterdam has had a rich hip hop music scene since the early 1980s. It is also the home of Gabber, a type of hardcore electronic music popular in the mid-1990s, with hard beats and samples. Groups like Neophyte and Rotterdam Terror Corps (RTC) started in Rotterdam.

Rotterdam features in Edgar Allan Poes short story ‘The Unparalleled Adventure of One Hans Pfaall’ (1835), as well as J.T. Sheridan Le Fanus Strange Event in the Life of Schalken the Painter (1839).

Part of Jackie Chans 1998 film Who am I? is set in Rotterdam.

Enders Shadow, part of the series Enders Game is partially set in Rotterdam.

In season 1, episode 2 of The Golden Girls ("Guess Whos Coming to the Wedding?"), Dorothy reminisces how her ex-husband, Stan, would buy her tulips after they had a fight. "Towards the end, our house looked like Easter in Rotterdam."

The British band The Beautiful South recorded a song named after this region.

Rotterdam has many museums. Well known museums are the Museum Boijmans Van Beuningen, the Netherlands Architecture Institute, the Wereldmuseum, the Kunsthal, Witte de With Center for Contemporary Art and the Maritime Museum Rotterdam. The Historisch Museum [1](Historical museum) has two buildings: the Dubbelde Palmboom and the Schielandshuis.

Other museums include the tax museum and the nature historical museum. At the historical shipyard and museum Scheepswerf De Delft the reconstruction of ship of the line Delft can be visited.

Tour of the markthal food market in rotterdam