Corporate drone Peter Gibbons (Ron Livingston) hates his soul-killing job at software company Initech. While undergoing hypnotherapy, Peter is left in a blissful state when his therapist dies in the middle of their session. He refuses to work overtime, plays games at his desk and unintentionally charms two consultants into putting him on the management fast-track. When Peters friends learn theyre about to be downsized, they hatch a revenge plot against the company inspired by "Superman III." 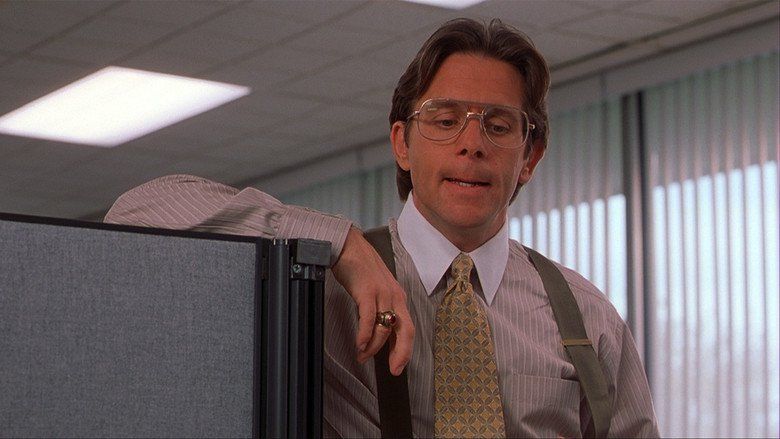 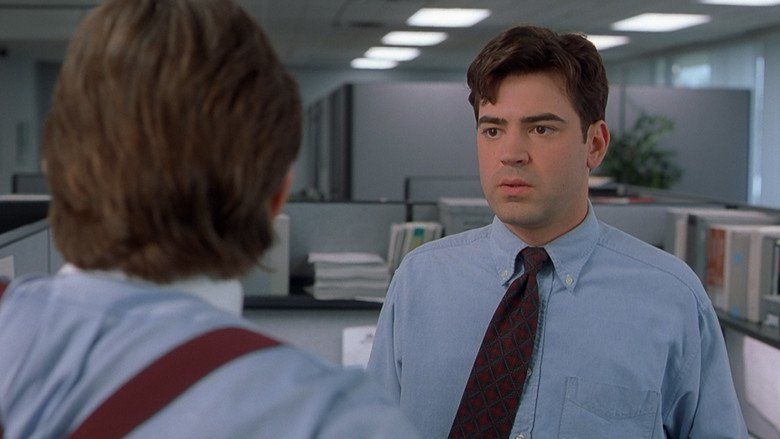 The films sympathetic depiction of ordinary IT workers garnered a cult following within that field, but also addresses themes familiar to white collar employees and the workforce in general. 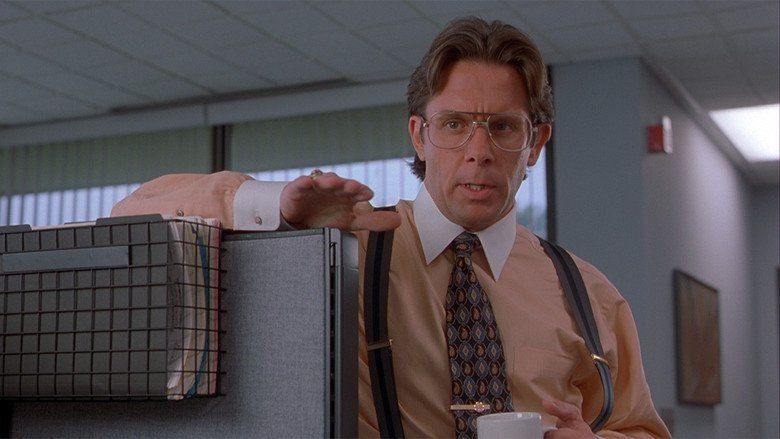 Shot in Las Colinas and Austin, Texas, Office Space is based on Judges Milton cartoon series. It was his first foray into live action film and second full-length motion picture release. 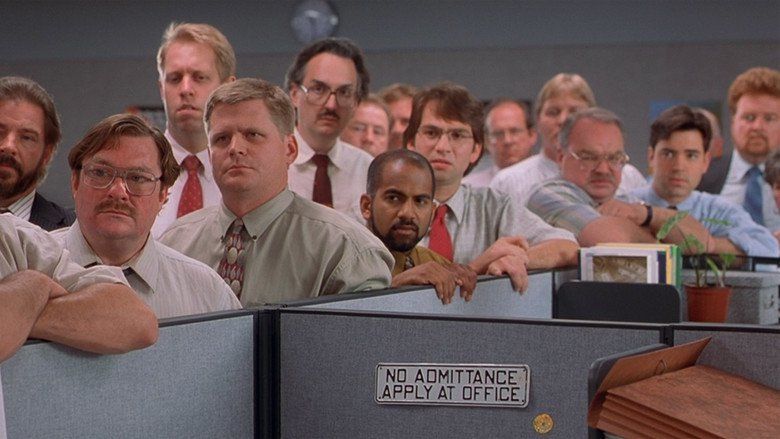 While not a box office success, the film has sold well on DVD and VHS, and has become recognized as a cult classic.

Three office workers strike back at their evil employers by hatching a hapless attempt to embezzle money. 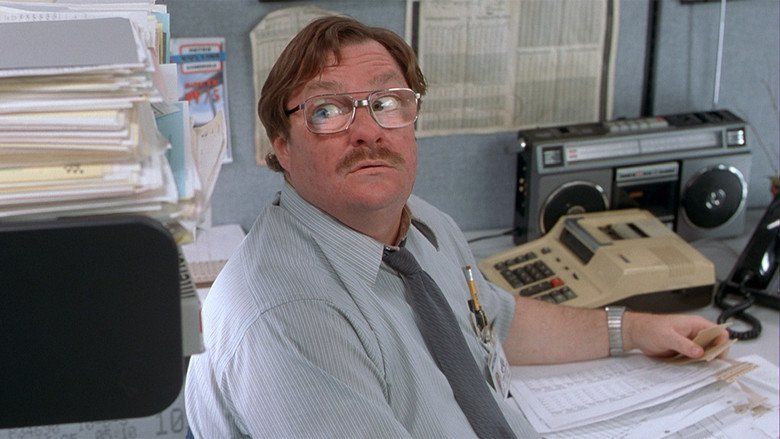 Peter Gibbons, a disgruntled programmer at Initech, spends his days "staring at his desk" instead of actually working. His co-workers include Samir Nagheenanajar, who is annoyed by the fact that nobody can pronounce his last name correctly; Michael Bolton, who loathes having the same name as the famous singer, whom he hates; and Milton Waddams, a meek, fixated collator who constantly mumbles to himself. Milton had actually been laid off years earlier, though he was never informed and, due to a payroll computer glitch, continues to receive regular paychecks. All four are repeatedly mistreated by management, especially Initechs smarmy, callous vice president, Bill Lumbergh. The staff are further agitated by the arrival of two consultants, Bob Slydell and Bob Porter, who are brought in to help the company through downsizing and outsourcing. 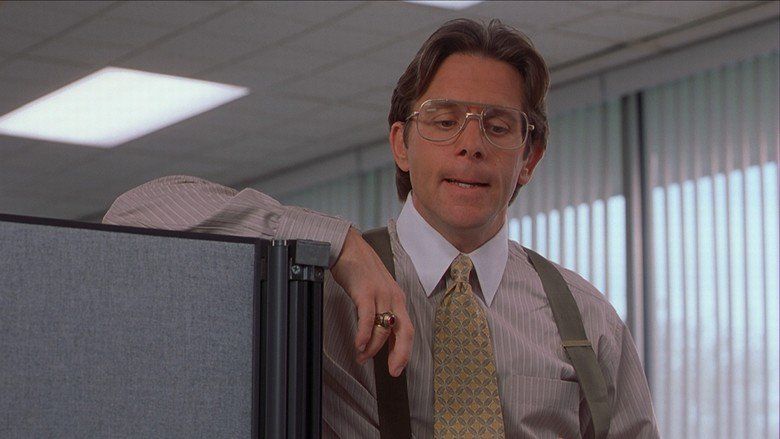 Peters girlfriend Anne convinces him to attend an occupational hypnotherapy session, but the therapist, Dr. Swanson, dies of a heart attack right after hypnotizing Peter. The newly relaxed Peter wakes up the next morning and ignores continued calls from Anne (who angrily leaves him and admits she has been cheating, confirming his friends suspicions) and Lumbergh (who was expecting Peter to work over the weekend). The following work day, Peter decides to skip work and asks Joanna, a waitress at Chotchkies (a parody of T.G.I. Fridays), out to lunch. Joanna shares Peters loathing of idiotic management and love of the television program Kung Fu. 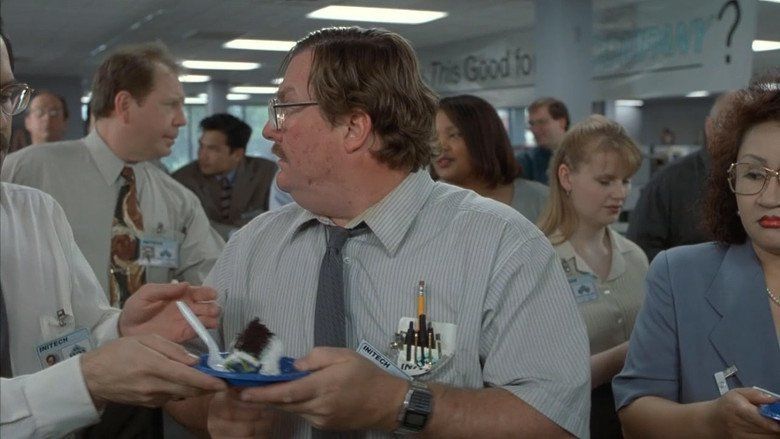 When Peter finally shows up at work, he disregards Initechs dress code, takes Lumberghs reserved parking spot, and refuses to follow Lumberghs directions. He also removes items that annoy him, such as a door handle that repeatedly shocked him and a cubicle wall that blocks his view out the window. The consultants, however, decide to promote him because of the positive impression he makes on them with his bluntness about the offices problems. Peter then learns that Michael and Samirs jobs will be eliminated, and the trio decide to get even by infecting Initechs accounting system with a computer virus designed to divert fractions of pennies into a bank account they control. They believe the scheme will succeed because the amounts are too small for Initech to notice, while over time they will receive a substantial amount of money. On Michael and Samirs last day at Initech, Peter takes one last item: a frequently-malfunctioning printer, which the three smash to pieces in a field. 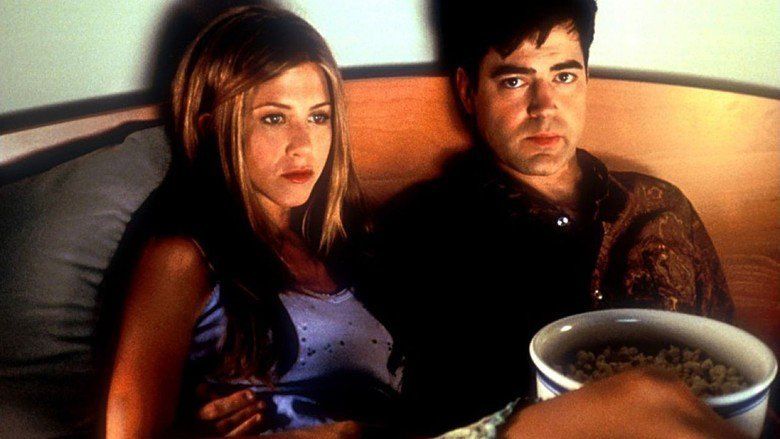 To his horror, Peter discovers that a bug caused the virus to steal over $300,000 in the first few days, a far more conspicuous loss to Initech. Haunted by the result, he admits to Joanna—who has finally worked up the courage to stand up to her boss and quit Chotchkies—that the scheme was a bad idea and that he plans to accept the blame for the crime. He writes a letter confessing everything, then slips an envelope containing the letter and the money (in unsigned travelers checks) under the door of Lumberghs office late at night. The next morning, Milton—having been deprived of his cherished red Swingline stapler by Lumbergh, forced to move to the cockroach-infested basement, and having had his paychecks finally cut off—enters Lumberghs office to reclaim his stapler. 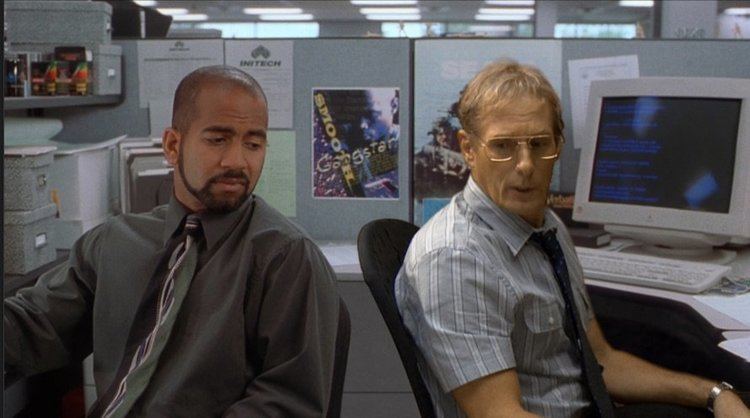 Fully expecting to be arrested upon arriving at work, Peter instead finds that his problem has solved itself: the Initech building is fully engulfed in flames, implying that Milton has finally made good on his quiet threats to destroy the company for slighting him and that all evidence of the missing money was destroyed. Peter finally finds a job that he likes: doing construction work with his next-door neighbor, Lawrence. As the two of them are cleaning up debris from the fire, Lawrence discovers Miltons stapler. Peter takes it, saying he thinks he knows someone who might want it, implying that "someone" is Milton. Samir and Michael drop by and offer to recommend Peter for a job at Initechs rival, Initrode, where they have secured new jobs. Peter declines, content with his new job and life. Meanwhile, Milton lounges on the beach at a fancy Mexican resort, but he is still not happy; he is heard mumbling complaints about his beverage and threatening to take his travelers checks (which he found in Lumberghs office) to a competitor. 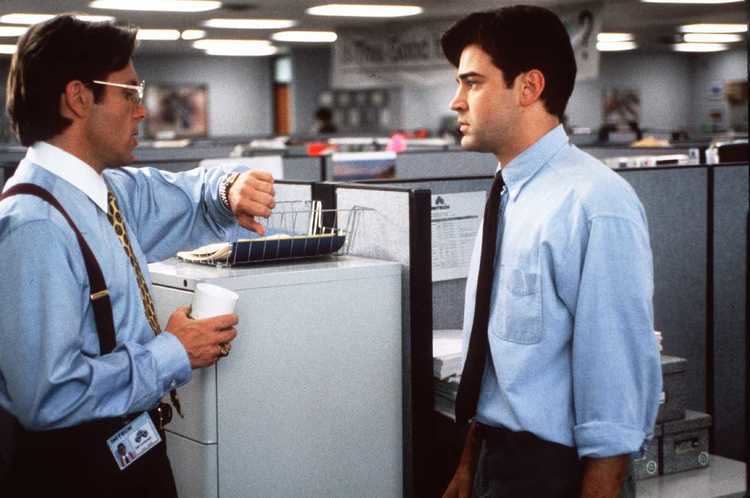 Shot primarily in Austin, Texas, Office Space has its origins in a series of four animated short films entitled Milton about an office drone named Milton that Mike Judge created, which first aired on Liquid Television and Night After Night with Allan Havey, and later aired on Saturday Night Live. The inspiration came from a temp job he once had that involved alphabetizing purchase orders and a job he had as an engineer for three months in the Bay Area during the 1980s, "just in the heart of Silicon Valley and in the middle of that overachiever yuppie thing, it was just awful". The setting of the film reflected a prevailing trend that Judge observed in the United States. "It seems like every city now has these identical office parks with identical adjoining chain restaurants", he said in an interview. He remembers, "There were a lot of people who wanted me to set this movie in Wall Street, or like the movie Brazil, but I wanted it very unglamorous, the kind of bleak work situation like I was in".

Judge sold the film to 20th Century Fox based on his script and a cast that included Jennifer Aniston, Ron Livingston, and David Herman. Originally, the studio wanted to make a film out of the Milton character but Judge was not interested, opting instead to make more of an ensemble cast–based film. The studio suggested he make a movie like Car Wash but "just set in an office". Judge made the relatively painless transition from animation to live-action with the help of the films director of photography who taught him about lenses and where to put the camera. Judge says, "I had a great crew, and its good going into it not pretending youre an expert". Studio executives were not happy with the footage Judge was getting. He remembers them telling him, "More energy! More energy! We gotta reshoot it! Youre failing! Youre failing!" In addition, Fox did not like the gangsta rap music used in the film until a focus group approved of it. Judge hated the ending and felt that a complete rewrite of the third act was necessary.

Judge also hated the poster that the studio created for Office Space (which portrayed an office worker completely covered in Post-it notes). He said, "People were like, What is this? A big bird? A mummy? A beekeeper? And the tagline Work Sucks? It looked like an Office Depot ad. I just hated it. I hated the trailers, too and the TV ads especially". Fox Filmed Entertainment chairman Tom Rothman conceded that the marketing campaign did not work and said, "Office Space isnt like American Pie. It doesnt have the kind of jokes you put in a 15-second television spot of somebody getting hit on the head with a frying pan. Its sly. And let me tell you, sly is hard to sell".

The Monday following the opening weekend, Judge received a phone call from Jim Carreys agent. The comedian loved the film and wanted to meet him, and Chris Rock called two weeks later.

Office Space received positive reviews from critics. On Rotten Tomatoes the film has a rating of 79%, based on 95 reviews, with the sites critical consensus reading, "Mike Judge lampoons the office grind with its inspired mix of sharp dialogue and witty one-liners." On Metacritic, the film has a score of 68 out of 100, based on 30 reviews, indicating "generally favorable reviews".

In his review in The New York Times, Stephen Holden wrote, "It has the loose-jointed feel of a bunch of sketches packed together into a narrative that doesnt gather much momentum." Roger Ebert gave the film three out of four stars and wrote that Judge "treats his characters a little like cartoon creatures. That works. Nuances of behavior are not necessary, because in the cubicle world every personality trait is magnified, and the captives stagger forth like grotesques". In his review for the San Francisco Chronicle, Mick LaSalle writes, "Livingston is nicely cast as Peter, a young guy whose imagination and capacity for happiness are the very things making him miserable." In USA Today, Susan Wloszczyna wrote, "If youve ever had a job, youll be amused by this paean to peons."

However, Owen Gleiberman in Entertainment Weekly gave the film a "C" rating and criticized it for feeling "cramped and underimagined". In his review for the Globe and Mail, Rick Groen wrote, "Perhaps his TV background makes him unaccustomed to the demands of a feature-length script (the ending seems almost panicky in its abruptness), or maybe he just succumbs to the lure of the easy yuk...what began as discomfiting satire soon devolves into silly farce."

Office Space has become a cult classic, selling well on home video and DVD. As of 2003, it had sold 2.6 million copies on VHS and DVD. In the same year, it was in the top 20 best-selling Fox DVDs along with Theres Something About Mary.

Entertainment Weekly ranked it fifth on its list "25 Great Comedies From the Past 25 Years", despite having originally given the film a poor review.

On February 8, 2009, a reunion of the cast (featuring many of the cast members) took place at the Paramount Theatre in Austin to celebrate the tenth anniversary of the film, which included the destruction of a printer on the sidewalk.

Comedy Central premiered Office Space on August 5, 2001 and 1.4 million viewers tuned in. By 2003, the channel had broadcast the film another 35 times. These broadcasts helped develop the films cult following and Ron Livingston remembers being approached by college students and office workers. He said, "I get a lot of people who say, I quit my job because of you. Thats kind of a heavy load to carry." People approached Stephen Root asking him to sign their staplers. The Red Swingline stapler featured prominently in the film was not available until April 2002 when the company released it in response to repeated requests by fans of the film. Its appearance in the film was achieved by taking a standard Swingline stapler and spray-painting it red.