Mukdahan (Thai: ,  ) is one of the northeastern provinces (changwat) of Thailand. Neighboring provinces are (from south clockwise) Amnat Charoen, Yasothon, Roi Et, Kalasin, Sakon Nakhon, and Nakhon Phanom. To the east it borders the Mekong River, across which lies Savannakhet Province of Laos. 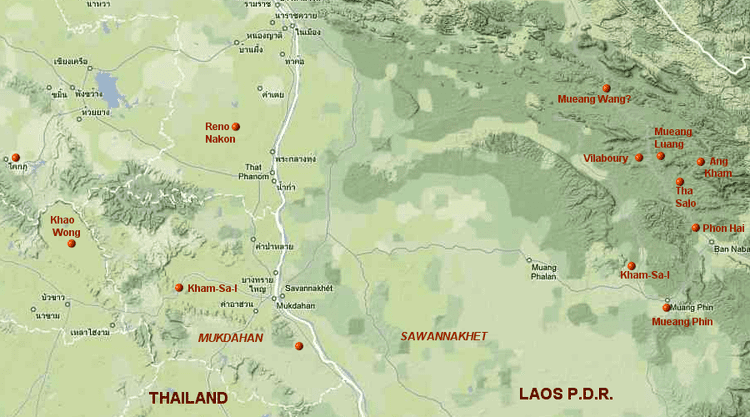 The province is in the Mekong valley. In the west of the province are the Phu Phan mountains, which are covered with thick forests.

Lord Chanthakinnaree (?????????????), his son, succeeded him as ruler. Then, in B.E.2310, a huntsman crossed over the Mekong and arrived along the right side at the mouth of the stream Bang Muk (??????), where he discovered a discarded realm complete with a monastery and seven sugar palms on the nearby riverbank. He found the area much better than the territories along the left side of the Mekong, and moreover at the mouth of the Bang Muk was an abundance of fish. Thus he headed back to report this to his ruler Lord Chanthakinnaree. Lord Chanthakinnaree led his followers across the Mekong to inspect the area and found that the area was indeed the remains of an ancient realm and in much better condition than any area along the left side of the Mekong. He led his people from Baan Luang Phonsim to establish a settlement on the right side of the Mekong at the mouth of the Bang Muk.

When he began to clear away the forests to make way for his resettlement of the realm, he found two Buddha images beneath a sacred fig tree on the banks of the Mekong. The larger of the two was bricks-and-mortar, while the smaller one was made of fine iron. He had a new monastery built at once in the vicinity of the old, abandoned temple on the banks of the Mekong, and named it Wat Sri Moungkhoun (????????????) (cognate to Sri Mongkol (???????) in Central Thai, meaning Temple of Serene Auspices). He also constructed a palatial manse in the vicinity of the temple where he enshrined both Buddha images in vihara. Later, the iron Buddha image (the smaller one) appeared to mysteriously reestablish itself beneath the fig tree where it had first been discovered and ultimately, after some three or four spectacles of this nature, began slowly sinking into the ground there until only the crown of the head could be seen. An alternate place of worship was built there to cover the site instead and the image itself was then named Phra Loup Lek (????????????), or Venerable One of Ironmetal Who Shrouds Himself. Nowadays the site where Phra Loup Lek would submerge himself beneath the earth has been overtaken by the waters of the Mekong and washed away (presumably leaving only the shrine rescued and preserved at the front of the vihara at todays Wat Sri Mongkol South (?????????????)).

As for the mason-and-mortar Buddha image enshrined in the vihara at the Sri Mongkol Temple, the inhabitants of the realm named it Phra Chao Ong Luang (???????????????), or Venerable Holy One, and made it the representative image of Wat Sri Mongkol, which itself was later renamed to Wat Sri Mongkol South; this Buddha image has been associated with the settlement and realm ever since.

During the rebuilding of the realm, at around midnight there were reports of a transparent or translucent object glittering and bright spotted emerging from the seven sugar palms on the banks of the Mekong River. It drifted in the air above the Mekong every night until near dawn when the crystal-like object would then float back into the seven trees from whence it came. Lord Chanthakinnaree named this auspicious omen Keo Mukdahan (????????????) or the Pearlsmouth Crystal as he had founded his realm on the banks of the Mekong right where the mouth of the stream Bang Muk (or Pearlhaven) was located, in which people had discovered pearls (muk; ???) in clams there. However, it is important to note that mukdahan can refer to most any semiprecious stone resembling the pearl having a grey dull color, and not necessarily the pearl oyster, Pinctada margaritifera. Lord Chanthakinnaree then renamed the realm to Mueang Mukdahan, as from the Fourth Month of the Year of the Pig, Year 1132 of the Chulasakarat (Minor Era), [Year 2313 of the Buddhasakarat (Buddhist Era or BE)] of the Buddhist calendar. The realm of Mukdahan at this stage covered both sides of the Mekong and reached the frontier lands of the Vietnamese (including the Laotian province of Savannakhet).

In B.E.2321, during the Thonburi Period when King Taksin the Great extended his armed forces into the area of the Mekong River, he ordered Phra Mahakasut Suek and Chao Phya Chakri to dispatch their troops to the banks of the Mekong in order to suppress and unify the lords of all the realms great and small there on both sides of the Mekong together under the reign of the Kingdom of Thonburi, declaring Lord Chanthakinnaree the Phya Chanthasrisuraja Uparaja Mandhaturaj (???????????????????????????????????), the first Lord of the Realm of Mukdahan and thereby officially named the realm Mueang Mukdahan.

The city of Mukdahan was founded in 1770 by Lord Chanthakinnaree of Phonsim. It was originally administered from Udon Thani, but in 1907 it became a district (amphoe) of Nakhon Phanom Province. On September 27, 1982 Mukdahan was upgraded to provincial status.

In 2006, the Second Thai-Lao Friendship Bridge from Mukdahan to Savannakhet, Laos was opened. 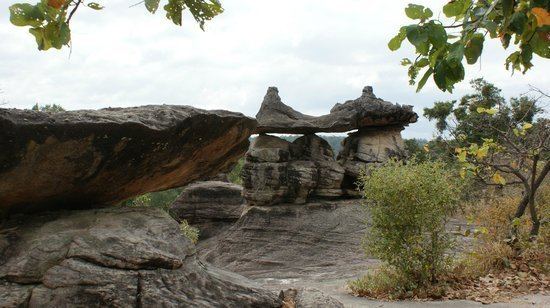 Ho Kaeo Mukdahan Chaloem Phra Kiat Kanchanaphisek (????????????????????????????????????????) The tower was built to commemorate the 50th anniversary of the kings accession to the throne. The topmost sphere houses a Buddha image “Phra Nawa Ming Mongkhon Mukdahan” and 7 Buddha statues in 7 different attitudes for each day of the week. 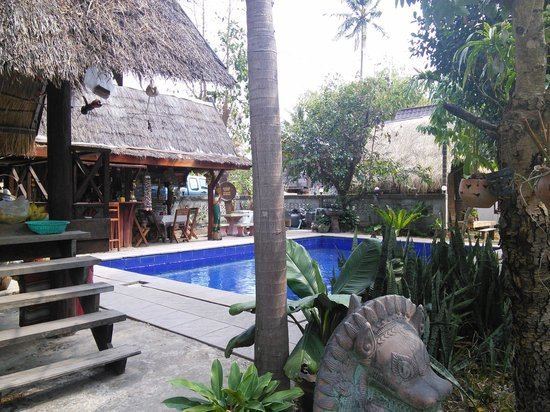 Chaopho Chaofa Mung Mueang Shrine (?????????????????????????) The shrine, which also houses the city pillar, is on Song Nang Sathit Road in the Amphoe Mueang Municipality. For the people of Mukdahan, the shrine is considered a sacred place of the spirit that protects the city.

Wat Si Mongkhon Tai (?????????????) Its main ordination hall or ubosot houses a concrete Buddha statue, which is considered a sacred item of Mukdahan.

Indochina Market (??????????????????) The market lines the Mekong River. The major shopping area is the hub of products, local and imported, as well as OTOP ("One tambon, one product") of Mukdahan. 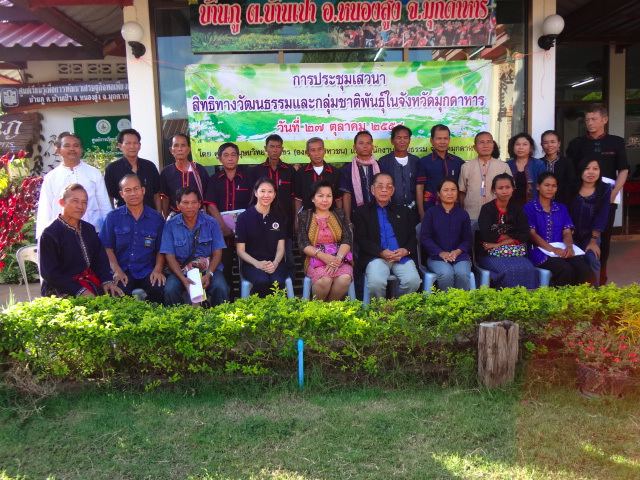 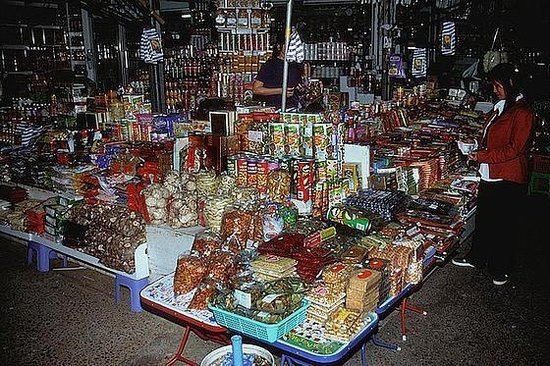 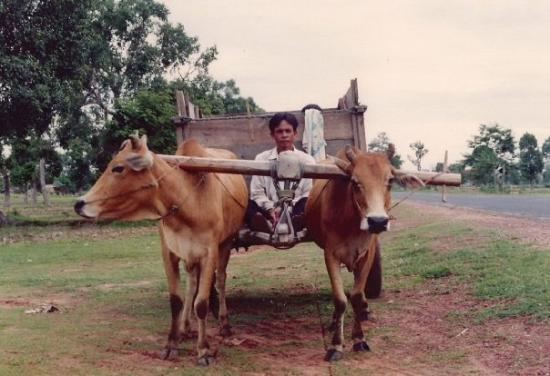 Boat Races (??????????????????) The tradition has been handed down since ancient times. It is held annually, on the 13th–15th days of the waxing moon of the 11th lunar month, on the Mekong River to mark the end of Buddhist Lent. There are 2 major categories, speed racing for small, medium, and large boats. All participating boats are dug to have a round hull and will compete on a 3 km-long distance on the Mekong River. Another category is the fantasy boat contest in which the racing boats are decorated, particularly at the figureheads. Each year, numerous boats join the competition in both categories while people from Mukdahan and nearby provinces as well as Laos pack the venue.