Fame-seeking members of the animal kingdom experience the sleazier side of show business in this puppet-filled parody. 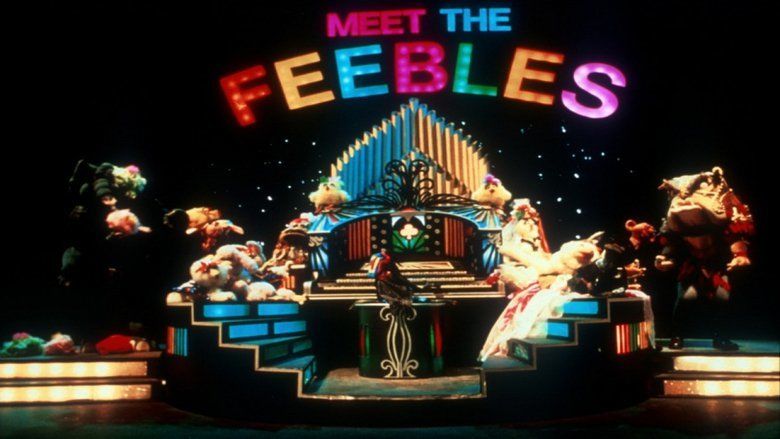 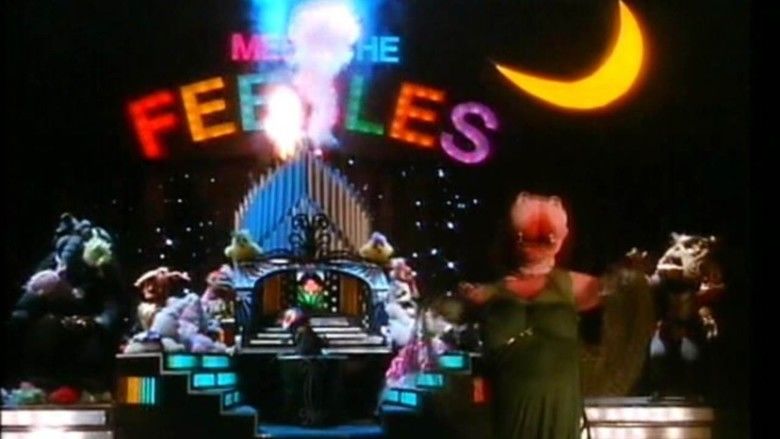 Like Hensons Muppets, the Feebles are animal-figured puppets (plus some people in suits) who are members of a stage troupe. However, whereas Hensons Muppets characterize positivity, naive folly, and innocence, the Feebles present negativity, vice, and other misanthropic characteristics. Apart, it could be argued, from Robert the hedgehog, who is portrayed as positive, innocent and naive. It is the first Jackson film that was co-written by his future wife Fran Walsh, who has gone on to act as co-writer for all his subsequent films. 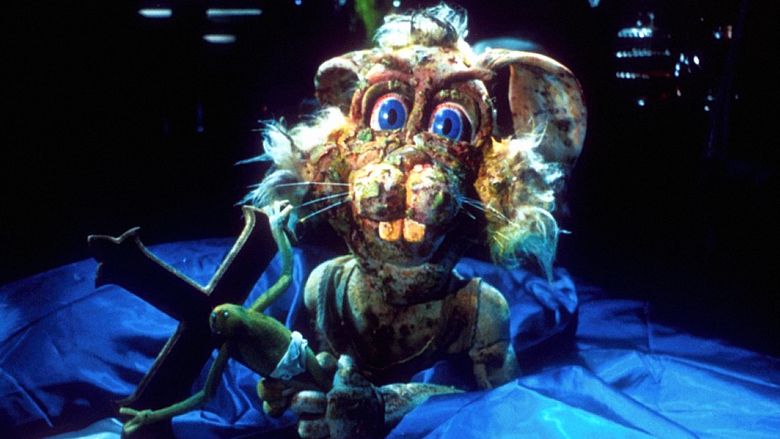 A commercial failure on release, the film went on to win a cult following, and won over new viewers following Jacksons success with The Lord of the Rings trilogy. During his acceptance speech at the 2004 Academy Awards, Jackson mentioned Feebles, joking that it had been "wisely overlooked by the Academy." 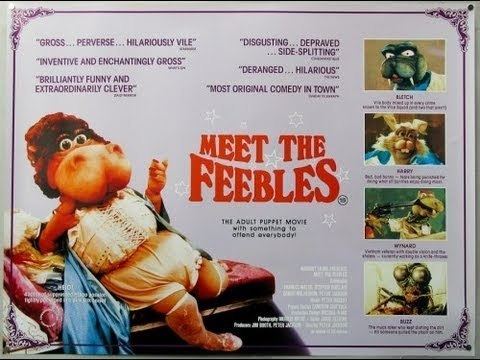 The eponymous theatre troupe is rehearsing the title song with hopes of finding success through being picked up for a syndicated television show. Heidi, the star of the show, is insulted by pornographic director Trevor and complains to her boss and lover, Bletch, who is actually in an adulterous relationship with Samantha. Meanwhile, Robert, the new member of the team, arrives at the theatre and immediately falls in love with another newcomer, Lucille. Samantha confronts Heidi, insults her, and reveals her relationship with Bletch. Robert confesses his love to Lucille, and the two become engaged. Sidney, Arthurs friend and member of the team, receives a visit from his ex-wife Sandy with his alleged son Seymour (who comically very strongly resembles Sidney). Sandy informs him she will be preparing a paternity case against him.

After a good beginning – the Feebles sign with a TV chain to appear in a prime-time television show – Bletch confesses to Heidi that he actually hates her and wants to give the main role to Samantha. After trying unsuccessfully to attempt suicide, Heidi goes on a shooting spree and kills many of the cast.

According to the epilogue, the fates of only six survivors are shown: Sidney gets extensive repair on his kneecaps after being shot by Heidi and works in an orchard as a struggling horticulturist with Seymour, Arthur received an OBE for his lifelong service at the theatre and retires to the country, Sebastian achieved worldwide fame for his best seller The Feeble Variety Massacre: One Mans Act of Heroism! and is negotiating film rights, Robert and Lucille are married with two children and Robert is an award winning fashion photographer for a womens magazine. Finally, after serving ten years in a female penitentiary, Heidi has been rehabilitated under the community and now works under a new identity on the check-out counter of a large supermarket.

A distraught Heidi runs to Bletch after being insulted by Trevor. Bletch is having sex with Samantha, but hides the tryst. Although Bletch is physically disgusted by Heidi, he insincerely comforts her since he needs her talent on the show.

Later Samantha insults Heidi, claiming Bletch really wants Samantha. Distraught, Heidi drowns her sorrows in an entire chocolate cake, as she reminisces about her past romance with Bletch in a black-and-white flashback to her days as a lounge singer. Flatulence caused by the cake causes Heidi to lay waste to the set during the rehearsal of a feature number; Sebastian then lambasts her. Heidi rushes to Bletch for emotional affirmation, but he is unable to spare her the sight of Samantha performing oral sex on him. Heidi locks herself in her room and refuses to perform, but relents after Bletch has make-up sex with her.

Heidis performance helps secure the Feebles a syndicated series. Shortly afterwards, Heidi attempts to seduce Bletch in his office, but Bletch completely disowns her since Samantha is now to be the star of the show. Unfortunately, Bletch is unaware of Heidis extremely fragile mental state.

Robert shows up for his first day as a cast member, and is accosted by the Fly, who tries to corrupt Robert into informing on the cast.

Arthur rescues Robert and shows him around, where Robert sees Lucille for the first time. Although he is romantically terrified of her at first, he later summons up enough courage to ask her out and they fall in love. Later Trevor drugs Lucille (to manipulate her into performing in his pornographic films). Robert walks in on the drugging, but misinterprets it as Lucilles decision, and disowns her for being a drunk. They make up later after Robert saves her from Heidis crazed gun rampage, and eventually get married.

Dennis is shown peeping on Harry in a threesome with two female rabbits. Harry feels physically ill after this episode and is accosted by the Fly, who assumes he has a sexually transmittable disease (STD) and wants to publish the scandal. Dr. Quack diagnoses Harry with "The Big One". The Fly publishes the scandal in a local tabloid – to the dismay of Bletch, who presumably wants to avoid negative press on the cast. Trevor lures the Fly into the bathroom, where Bletch tears his wings off and flushes the Fly down the toilet. After vomiting all over the stage in the live performance, he finally learns that he only has bunny pox. Unfortunately, while rejoicing in the news that "The Big One" will not cause his death, Harrys head is blown apart by a gunshot during Heidis rampage.

Trevor is approached by a sniveling Wynyard looking for his fix, but the drugs have not yet been delivered. Bletch is later shown on a golf course consummating a deal with Cedric. However, after testing on Dennis, the drugs provided by Cedric turn out to be household borax, infuriating Bletch. Louie, Cedrics agent, is literally liquefied after being force-fed some of the borax by Bletchs henchmen.

Bletch and his cronies venture to the docklands to fight Cedric and his crab-crewmen. Bletchs side prevails after killing Cedric and the crabs, maneuvering past a huge spider, and driving through the insides of Cedrics boss Mr. Big. However, Barrys head is eaten by the spider.

When the drugs finally arrive at the theatre, Wynyard is finally able to get his fix, which puts him into a stupor.

While the cast performs an opera number, Sebastian lambasts Robert for not acting his part as an extra on the stage. As punishment, he assigns Robert the task of replacing Wynyards assistant, who has just been killed by Wynyards knife throwing while going through drug withdrawal. Wynyard guilt-trips Robert into giving him money for drugs, after telling him a horror story about his time in Vietnam (shown as a flashback parodying The Deer Hunter). He eventually gets his fix from Trevor and injects himself into a deep slumber.

The acts gradually disintegrate – Heidi nearly destroys the set by botching a swing, the Indian mystic incapacitates himself by contorting his head into his rectum, and Sids tribble-like pets are crushed by a barrel. Seeing his show in shambles, Sebastian tries to convince Bletch to feature his personal performance, the sexually explicit number Sodomy. This is summarily rejected by Bletch, who physically throws Sebastian out of his office. Sebastian decides to use the number anyway and performs it in front of the live audience, to Bletchs horror.

The Elephant and the Chicken

Sandy accuses Sid of being the father of their chicken-elephant baby, to his dismay and denial. During the live show, Sandy again accosts Sid on stage with the paternity suit. During a later tragic crossfire scene, Sid braves the crazed Heidis automatic fire to save his baby. His heroism costs the elephant two bloody knee wounds, and he accidentally crushes Sandys shot-off head after it squawks out one final invective.

While the live show is proceeding elsewhere, Heidi attempts suicide by hanging, but her weight breaks the chandelier from the ceiling and she falls through the floor. She makes her way to Bletchs machine gun and tries to kill herself, but at the last moment, Samantha shows up and taunts her. Heidi responds by killing Samantha. Meanwhile Wynyard, in a drugged stupor, tries to kill Robert before accidentally killing himself. Sebastian does his "Sodomy" number, while Heidi rampages over the entire set on a killing spree. She finally finds Bletch and pumps many rounds into him as well. Bletch lies to Heidi about loving her and orders Trevor to kill her. However, Robert swings in just in the nick of time to kick Trevor, giving Heidi the chance to vaporise the rat. Heidi then literally blows Bletchs brain out. Realizing that she killed her love, she gives up her gun and sadly sings "Garden of Love", leading into the epilogue and the credits.

The film was originally conceived as part of a television series, and only belatedly became a feature after Japanese investors proposed expanding it; as such, the script was hastily re-written. The dialogue was recorded before shooting began. Made on an extremely low budget considering the time-consuming process of working with puppets, the film went over budget and schedule. Some scenes, including the Vietnam flashback, were funded by members of the film crew, and filmed secretly under the title The Frogs of War. The Vietnam flashback includes a game of Russian roulette as a parody of The Deer Hunter.

An initial application for Film Commission money was rejected, ironically by executive director Jim Booth, who a short time later became Jacksons producer. The Commission did eventually grant the production two-thirds of its $750,000 budget, though relationships between the funders and the production soured and the Film Commission removed its credit from the film.

Every vehicle seen in the film is a variation on the Morris Minor, including a specially constructed limousine. Morris Minors also appear in Jacksons Bad Taste and Braindead. The production team could not get hold of blank rounds for the M60 machine gun used in the film, and therefore the gun was firing live ammunition.

The film was marketed in some countries with the tagline: "From the creators of Bad Taste, comes a film with no taste at all!"

Meet the Feebles was given its public premiere at a fantasy film festival in Hamburg, in April 1990.

The film was met with generally positive reviews, and holds a 70% "Fresh" rating on aggregate review site Rotten Tomatoes, based on 23 reviews. The sites consensus reads "Dark and vulgar, Meet the Feebles is a backstage comedy featuring puppets that offers proof of Peter Jacksons taste for sheer outrageousness, even if it often lapses into pure juvenilia."

During a limited theatrical release in North America in 2002, critic James Berardinelli touched on aspects of the film which likely helped ensure it limited release in cinemas. "The stories of these ... characters are told in a disgustingly graphic, obscenely offbeat, and caustically funny manner. Meet the Feebles is for those with a strong stomach and a seriously warped sense of humor. The film is so off the beaten track that it makes Monty Python seem mainstream."