When teenagers Mike (Grant Cramer) and Debbie (Suzanne Snyder) see a comet crash outside their sleepy small town, they investigate and discover a pack of murderous aliens who look very much like circus clowns. They try to warn the local authorities, but everyone assumes their story is a prank. Meanwhile, the clowns set about harvesting and eating as many people as they can. Its not until they kidnap Debbie that Mike decides its up to him to stop the clowns bloody rampage. 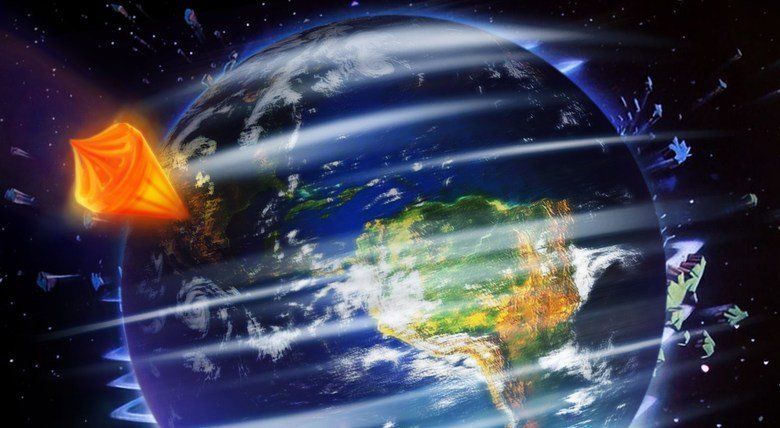 Killer Klowns from Outer Space is a 1988 American science fiction horror comedy movie made by The Chiodo Brothers and starring Grant Cramer and Suzanne Snyder. It is the only Chiodo Brothers directed and written film – they have worked in many other projects in other roles, such as producing and visual effects. The filming took place in the city of Watsonville and at the Santa Cruz Beach Boardwalk. The film is about a race of aliens (who resemble evil clowns) that arrive on Earth to capture and harvest people to use as sustenance. A sequel entitled Return of the Killer Klowns from Outer Space in 3D is currently in pre-production and is tentatively scheduled for release in 2016. 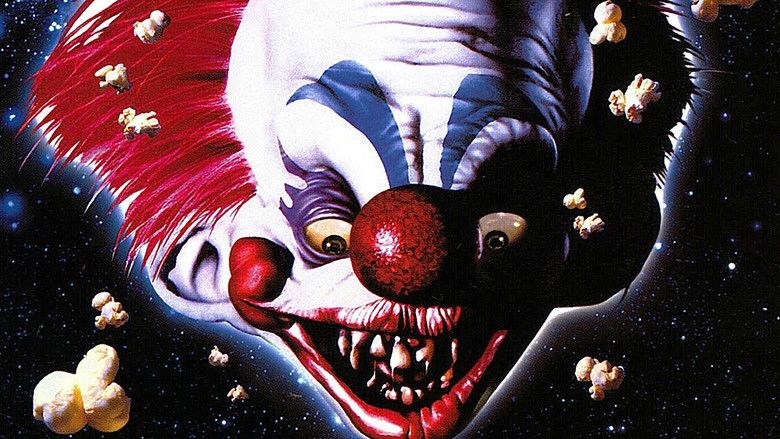 Aliens, who look like clowns, arrive on Earth to capture and harvest people in order to use them as sustenance. 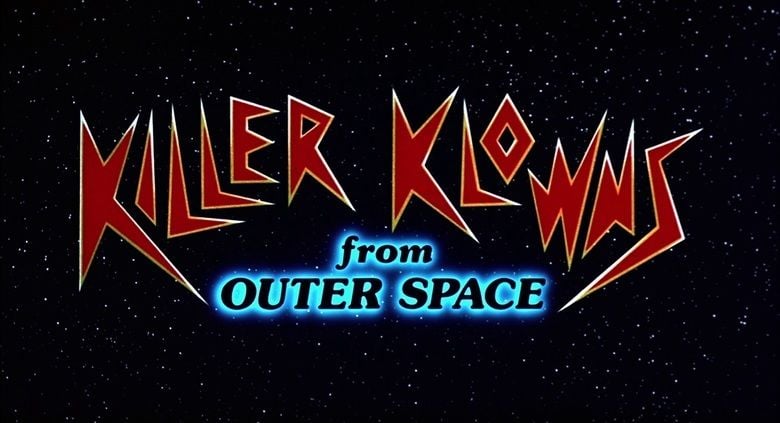 In the town of Crescent Cove, California, (film location:Watsonville, California ) Farmer Gene Green spies a comet-like object fall to Earth. Believing it to be Halleys Comet, he goes to find it, coming across a large circus tent-like structure. He is at first amused by the sight, but he and his dog Pooh Bear are quickly captured by mysterious clown-like creatures. Meanwhile, Mike Tobacco (Cramer) and his girlfriend Debbie Stone (Snyder) had also seen the comet and she convinces him to follow it. Coming across the same structure, they discover a massively complex interior that looks nothing like a circus tent, and a room with cotton candy-shaped cocoons. Discovering the old man and a friends remains in the cocoons, they are nearly captured by the alien clowns who coat them with a popcorn gun as they escape before giving chase with a balloon-animal dog that comes to life. Narrowly escaping, Mike and Debbie travel to the police station to confide in her ex-boyfriend Dave Hanson and his skeptical, curmudgeonly partner Curtis Mooney about the killer clowns from outer space. The latter believes it to be a hoax, and so does Dave after they drop Debbie off at her home and investigate the site to find the ship missing. Coming across a group of cars on the makeout hill "Top of the World", Dave finds the place destroyed and several cars filled with the cotton candy-like substance, and finally believes Mike. 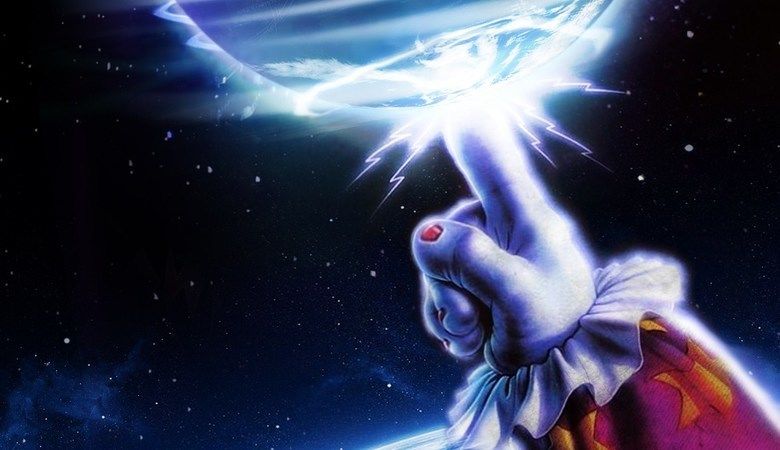 Meanwhile, the Klowns journey into town and proceed to garner a supply of townspeople using ray guns that resemble toys to wrap them in cocoons. One Klown invades a drugstore, knocking over everything in sight and killing the clerk, while a group of Klowns pretend to deliver a pizza in order to capture another victim. Then, a Klown in the park puts on a puppet show that lures a man to his death. Downtown, a Klown drives up in an alley full of biker thugs. One of the bikers decides to pick on the little Klown by smashing his tricycle. The Klown, angered, punches the thugs head clear off while the rest of the gang flees; another Klown goes to a restaurant and tries to lure a little girl into its trap but fails. Meanwhile, a tall Klown (who has the ability to float on the highway) plows a driver off the road and over a ledge to his death. 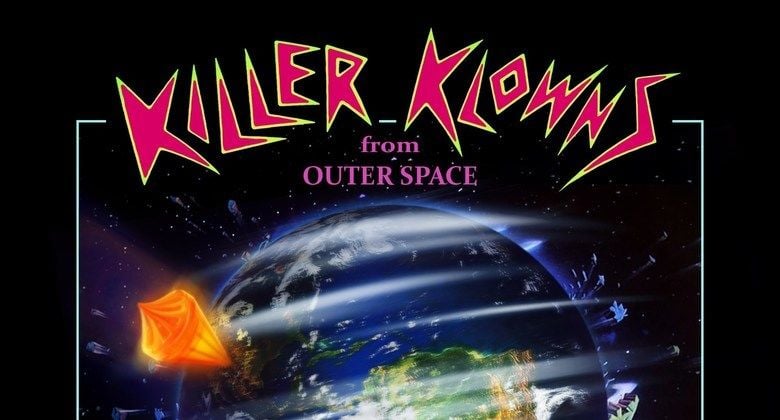 Mike and Dave encounter one of the Klowns using a shadow puppet to shrink a crowd of unsuspecting people into the palm of his hand before feeding it to a bag full of its offspring, but it escapes before Mike can run him down. Mooney, convinced that the calls to the police station are the result of a hoax, encounters one of the Klowns and a series of pranks makes Mooney lock him up, not realizing the threat is real however until it is too late. Dave returns to the station to find two prisoners dead, the station decorated with shoe prints, and Mooney being mimicked like a puppet with the Klowns hand inserted in his back. Dave shoots the Klown several times before destroying its nose, which causes it to spin wildly and explode. In town, Mike and his friends Rich and Paul Terenzi, who own an ice cream truck they were using to warn people, notice the town is overrun by the Klowns and run to avoid capture. At her home, Debbie is attacked by creatures that grew from the popcorn she had been sprayed with, and then is captured by the Klowns when they arrive, trapping her in a giant balloon. Mike, Dave and the brothers give chase to the amusement park where five of the Klowns had already killed a security guard by plastering him with acidic pies. 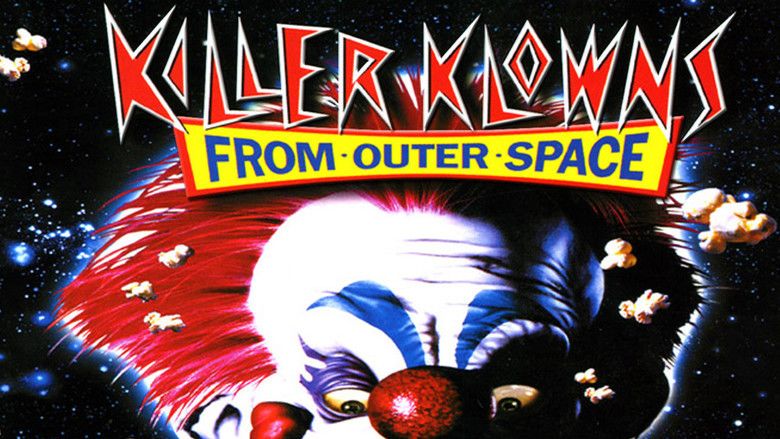 Journeying through a funhouse leading to the ship, the Terenzi brothers become separated, meeting two female klowns who sexually harass them off-screen while Mike and Dave find their way into the ship and free Debbie from her imprisonment after witnessing one of the Klowns using a silly straw to devour one of the liquified townspeople like a spider. They run through the maze of a ship together, encountering several strange traps and tricks along the way before being surrounded by the Klowns. They are distracted when Rich and Paul arrive, after escaping the female clowns in their ice cream truck, and manage to trick them into stopping their attack using a fake plastic clown head to give them orders. However a viceroy, and supposedly the giant leader of the Klown army, named "Jojo the Klownzilla", arrives as in marionette-like form and breaks free from its strings, wanting to destroy the humans itself. After the other Klowns flee from the leader, it destroys the truck with Rich and Paul still inside. Dave shoots at the massive clown to distract him from Debbie and Mike. They escape as the ship begins to lift off the ground to leave Earth. Inside, Dave destroys the massive clowns nose with his badge and as a result, he explodes and the ship is destroyed with him. Having escaped to the authorities who had gathered outside the amusement park, Mike and Debbie briefly mourn their friends loss until the Klowns miniature car drops out of the sky. Dave is alive and they all embrace before Paul and Rich appear from the back of the car themselves, having hidden in the ice cream coolers to avoid the explosion. Debbie then asks if the ordeal is over as pies fly down and hit them both in the face to the sound of the Klowns laughter. 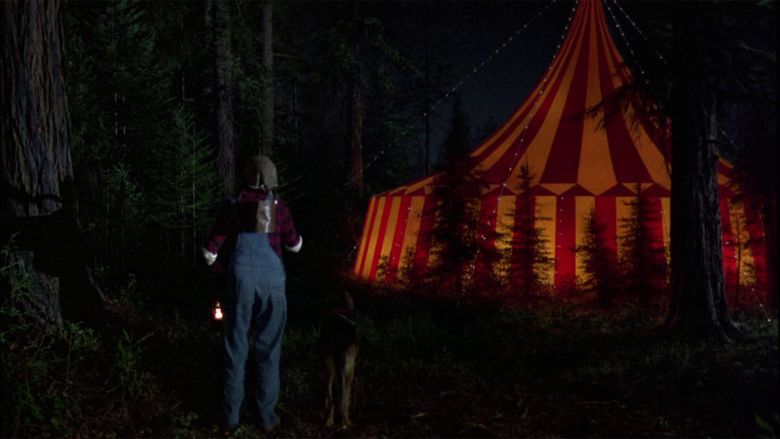 The film has become a cult favorite. On Rotten Tomatoes, it holds a positive review, with an average of 71%, based on 17 reviews, and it has a rating of 6/10 on IMDb. Critics and moviegoers believe that the film has gained such cult popularity due to coulrophobia being a common fear.

The first of the two figures is the most common Klown in the movie, a Klown warrior armed with a popcorn blaster, cotton candy cocoon victim, and a colourful base with a pole to hang the deceased. A Tower Records exclusive figure of the same Klown mold has a radical blue paint scheme with vibrant red and purple highlights. This warrior comes with all the same accessories as the regular Klown, with the exception of the blaster; instead he is equipped with a sinister bat (similar to those the aliens use at end of the movie to pummel the heroes). Though the latter Klown model is considered a one-off variant, it can clearly be seen near the end of the film as one of the first Klowns to reveal itself. It can also be seen earlier in the film during the Klown parade, where it is one of the two Klowns pushing the vacuum that collects the cotton candy cocoons. The only discrepancy is that the figurine comes with a white bat, rather than one of the red ones wielded in the film.

SOTAs Jerry Macaluso has stated that he would like to create a mega-size "Klownzilla" figure (approx.size up to 20 inches high or more). In January 2012, Tommy Kollmer, an artist known for his acrylic painting and sculpting, was commissioned to create a two-foot tall Klownzilla statue with a custom base. Images of the finished statue were shared with Charles Chiodo, who said, "This is a fitting and original artistic interpretation of Klownzilla. I like the muted color scheme. Youve captured the essence of the Klown menace of the character."

SOTA discontinued their Klown figures, but in 2008 Amoktime Toys announced they had purchased the license and their first Klown, "Shorty" will be available July 2009. Their Klowns are in scale with the Amoktime piece and according to Toyfair and the sculptor they have also bought the Shadow Klown aka Slim prototype from Sota and plan to produce it next. They have also mentioned a desire to do a Klownzilla piece in the future.

In 2007 Bump in the night productions began selling a line of officially licensed Killer Klowns masks props and costumes. The line consisted of mask of over sized collectors masks of the characters "Slim", "Shorty", and "Fatso".

The following year they released their Klownzilla and storefront Klown masks. They also sell the popcorn Klowns in a static prop and hand puppet version as well as full Klown costumes.

According to their commentary on the movie, the Chiodo Brothers plan on creating a sequel to the film. The star of the original film, Grant Cramer, revealed a summary of the sequels current story: “The idea is that there may be multiple sequels, and in each one, there’ll be one character [from the first movie] who carries over. So we’ll pick up where each of them has ended up in some new small town, and happen to be there when the Klown stuff happens again. My character ended up being the first one, and I think it was one of the Chiodos who came up with the idea that everybody thinks Mike Tobacco is crazy. He’s kind of the town drunk/derelict who’s always mumbling about the Klowns coming back, and everybody thinks I’m nuts, because I’m sure they’re going to return to attack the world again."

“And of course, when it happens, I have been planning for them to come back, so I end up being the mentor to these two young street performers whose car breaks down, and they end up in the small town of Kismet. It’s another town up in the mountains, and now all the fun begins again, except when they get into trouble, Mike comes up and teaches them the history of the Klowns and how to fight back against them. He’s somewhere between the energy of Kris Kristofferson’s character in Blade and Christopher Lloyd’s character in Back to the Future."

Like the original film, Stephen Chiodo is set to be the director and Charles Chiodo is set to produce, although they are still currently awaiting word on a distribution deal from a company so the production of the film can begin.

The current title of the film is The Return of the Killer Klowns from Outer Space in 3D.