Edmonds on his shape, Cardinals 2006 season

James Patrick "Jim" Edmonds (born June 27, 1970) is an American former center fielder in Major League Baseball and a current broadcaster for Fox Sports Midwest. He played for the California/Anaheim Angels, St. Louis Cardinals, San Diego Padres, Chicago Cubs, Milwaukee Brewers, and Cincinnati Reds. Known for his defensive abilities – particularly his catches – Edmonds also was a prolific hitter, batting .284 with 393 home runs and an on-base plus slugging percentage (OPS) of .903. He is affectionately known by Cardinal fans as "Jimmy Baseball", "Jimmy Ballgame", and "Hollywood". 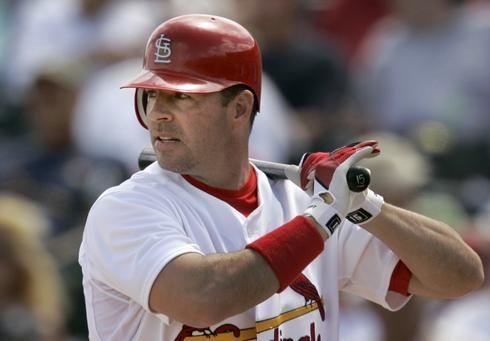 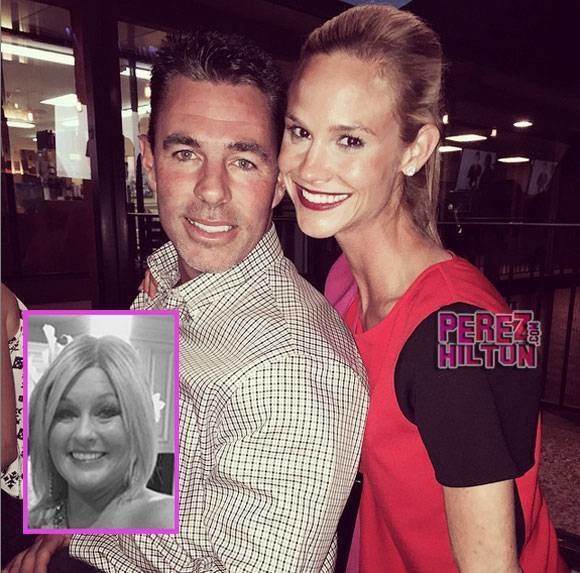 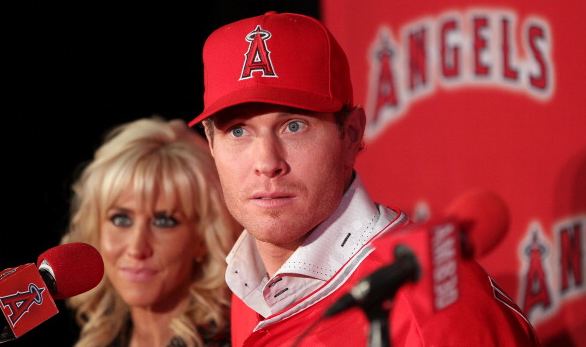 Edmonds has two daughters, Lauren and Hayley, with his first wife Lee Ann Horton. Edmonds and second wife Allison Jayne Raski were married on July 16, 2008, at the St. Louis County, Missouri Courthouse in Clayton, MO and the couple divorced in January 2014. The couple have two children: a son (Landon James) and a daughter (Sutton Jayne). Edmonds married Meghan O'Toole King (his third marriage) in St. Louis on October 24, 2014. His wife, Meghan, joined the cast of Real Housewives of Orange County in 2015. Edmonds himself also appears on the show. 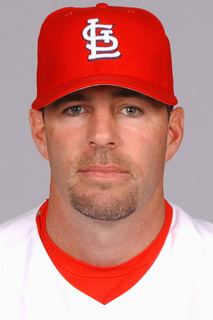 In September 2013, Jim Edmonds 15 Steakhouse closed in St. Louis, of which he was a 50 percent owner and it was named for his jersey number. 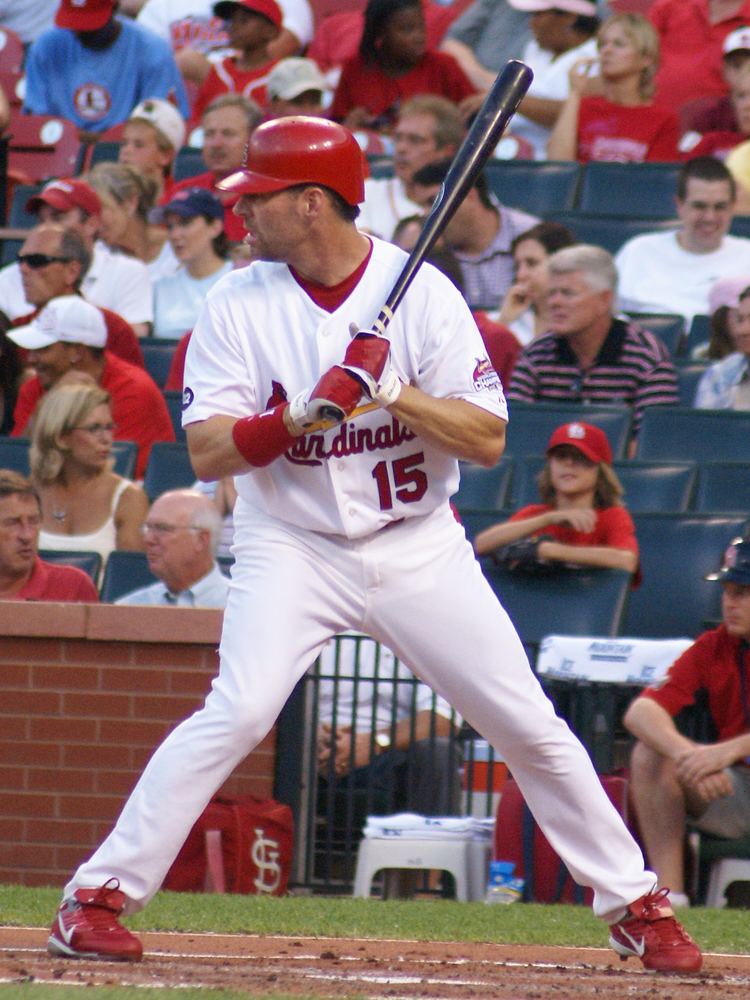 In December 2013, Edmonds and his business partner Mark Winfield, reopened the F15teen space as a restaurant called The Precinct. [1] The restaurant was dubbed "the safest bar in town” and also the “home of the hottest wings.” The former claim, like the name of the restaurant itself, was a bid to become the hangout of choice of city cops once they moved into their new headquarters just around the corner. Police-themed memorabilia shared space on the walls with framed Cardinals jerseys and flat-screen TVs.

In May 2015, The Precinct closed. [2] Edmonds and Windfield continue to partner in the restaurant business with the opening of Winfield's Gathering Place in Kirkwood, MO as a BBQ style restaurant. It does not promote Edmonds’ celebrity brand. In fact, no Edmonds, Cardinals or other sports memorabilia clutter the interior, though, of course, it has more than a few TVs in both the dining room and the bar area for watching games. [3]

Edmonds was selected in the seventh round of the 1988 draft by the California Angels. Following the draft, he was assigned to the Bend Bucks (in Bend, Oregon), the Angels' Short-Season A affiliate in the Northwest League. In 1988, he played in 35 games for the Bucks and hit .221. The following year, he was promoted to the Quad Cities Angels, the team's Class A affiliate in the Midwest League. He played in 31 games and hit .261.

In 1990, Edmonds advanced to the Palm Springs Angels, a "High-A" team in the California League. He played 91 games and hit .293. He remained with Palm Springs for the 1991 season as well. In 1992, he was promoted to Double-A with the Midland Angels in the Texas League. He hit .313 in 70 games for Midland. He was promoted again in 1992, moving up to Triple-A Edmonton Trappers for 50 games. The Angels changed Triple-A teams in 1993, so Edmonds played for Vancouver Canadians.

Edmonds was traded from Anaheim to St. Louis for second baseman Adam Kennedy and pitcher Kent Bottenfield shortly before the beginning of the 2000 season.

Throughout his career, Edmonds predominantly played center field. However, he played first base in stretches, usually as a result of injury to a starting first baseman, but sometimes simply to provide rest to regular position players, or to give another outfielder playing time. For instance, Edmonds made six starts at first when Albert Pujols suffered an oblique injury in June 2006. Additionally, he pitched two innings while in High-A ball in 1991.

Edmonds hit 30 or more home runs in five seasons, while maintaining a .285 career batting average, and knocked in over 1,140 runs in his career. He also received eight Gold Glove Awards in his career at center field, most of them coming as a member of the St. Louis Cardinals.

Three of Edmonds's most spectacular defensive plays came while on the Cardinals and the Angels. On June 10, 1997, while playing center field for the Anaheim Angels, Edmonds ran straight back towards the center field wall of Kauffman Stadium in Kansas City, and dove outstretched for a fly ball over his head, making the catch on the warning track. His other memorable catch came when on the St. Louis Cardinals on July 16, 2004, while covering center field against Reds batter Jason LaRue. LaRue hit a deep shot to center field that surely would have been enough to be a home run. On a dead run, Edmonds scaled the wall, reached his entire right arm over the fence, and caught the ball. During the 2004 NLCS against the Houston Astros, Edmonds made a diving, game-saving catch.

The 2004 season was Edmonds' best season. He hit .301, had a .643 slugging percentage, 42 HRs, and 111 RBI; all but batting average were career highs. As a result, he earned a Silver Slugger Award, a Gold Glove Award, and was fifth in the voting for the Most Valuable Player Award.

A defining moment of Edmonds' career came in the 2004 National League Championship Series, in which Edmonds hit an extra-inning home run to win Game 6. In Game 7, Edmonds made a spectacular defensive play in center, helping the Cardinals win the pennant.

During a Chicago Cubs-Cardinals game at Wrigley Field on July 19, 2004, pitcher Carlos Zambrano was ejected from the game for throwing at Edmonds. Zambrano screamed at Edmonds as he rounded the bases on a home run, earning Zambrano a five-game suspension.

Edmonds, along with Albert Pujols and Scott Rolen, earned the nickname "MV3" for their phenomenal 2004 seasons. Edmonds was on the cover of video game MLB Slugfest 2004.

On Mother's Day, May 14, 2006, Edmonds was one of more than 50 hitters who brandished a pink bat to benefit the Breast Cancer Foundation. In 2006, Edmonds helped the St. Louis Cardinals win their first World Series title since 1982 while contributing 4 RBI.

In his last two seasons in St. Louis (2006 and 2007), Edmonds struggled with post-concussion syndrome, which caused dizziness and blurred vision.

On December 14, 2007, Edmonds was traded to the San Diego Padres in exchange for prospect David Freese. As part of the deal, the Cardinals also agreed to pay part of Edmonds' 2008 salary. Edmonds' 241 home runs with the Cardinals are the fourth-most in franchise history.

On May 9, 2008, the Padres released him after hitting only .178 with one home run in 90 at bats. On May 14, 2008, the Chicago Cubs, in need of a left-handed bat, signed Edmonds to a one-year contract of which the Cubs were only responsible for the league minimum. He started the next day against his former team, the Padres, and went 1 for 4. Edmonds was not well received initially by the fans in Chicago, but after joining the Cubs, he hit over .300 with 8 home runs in his first six weeks. On June 21, 2008, Edmonds hit two home runs in the fourth inning against the Chicago White Sox. He also had two other multi-homer games as a Cub: one on July 31, 2008 against the Milwaukee Brewers and one on August 8, 2008 against his former team, the St. Louis Cardinals.

Edmonds did not play in 2009, sitting out because he did not receive what he or his agent considered a good offer. In January 2010, he announced his intention to return to the majors. On January 28, Edmonds signed a minor league deal with the Milwaukee Brewers. The Brewers added him to the major league roster on March 25. At that time, he said, "last year was a mistake, I should have played somewhere.”

On August 9, 2010, Edmonds was traded to the Cincinnati Reds in exchange for Chris Dickerson. Both Edmonds and Dickerson had to clear waivers because the non-waiver Trade Deadline had already passed.

On February 4, 2011, Edmonds signed a minor league contract with the St. Louis Cardinals; however, after continuing symptoms from a strained Achilles tendon suffered during the 2010 season, Edmonds officially announced his retirement from baseball on February 18, 2011.

On March 14, 2013, Fox Sports Midwest announced the hiring of Jim Edmonds as a member of their St. Louis Cardinals broadcasting crew. Edmonds will work as an analyst during Cardinals Live pre-game and post-game broadcasts. He replaces former Cardinal pitcher Cal Eldred, who had served in the same role for FSM since 2009. Eldred now works as a special assistant in the Cardinals organization. Since retiring from baseball Edmonds has remained in the St. Louis area and owns a local restaurant. He has expressed a desire to one day be a part of the Cardinals ownership group.

Edmonds' fielding ability has earned him recognition from Major League coaches and managers, who voted him a Rawlings Gold Glove winner eight times in nine seasons from 1997 to 2005.

ESPN's Rob Neyer lists Edmonds as #12 of the top 100 players of the first decade of the 21st century due to his productivity at the plate and gold-glove skills in center field.

On August 8, 2014, Edmonds was inducted into the St. Louis Cardinals Hall of Fame. He was announced as a candidate for the National Baseball Hall of Fame and Museum on November 9, 2015.