Jalen Anthony Rose (born January 30, 1973) is an American retired professional basketball player and current sports analyst with ABC/ESPN. In college, he was a member of the University of Michigan Wolverines' "Fab Five" (along with Chris Webber, Juwan Howard, Jimmy King, and Ray Jackson) that reached the 1992 and 1993 NCAA Men's Division I Basketball Championship games as both freshmen and sophomores. Rose played in the NBA for six teams, most notably alongside Reggie Miller on the Indiana Pacers teams that made three consecutive Eastern Conference finals, including the 2000 NBA Finals. 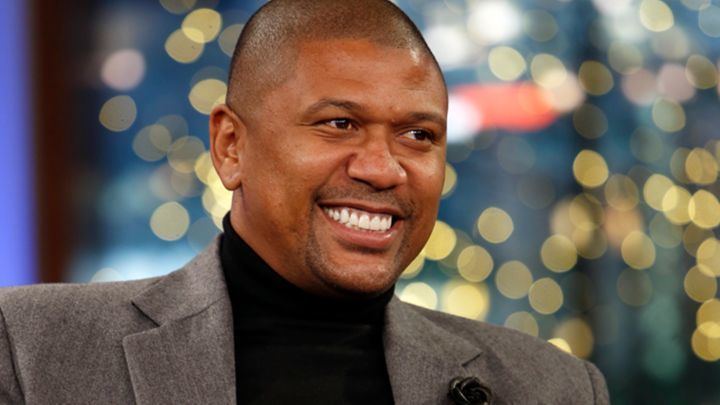 Rose currently serves as the official ambassador and spokesperson for the National Basketball Retired Players Association. 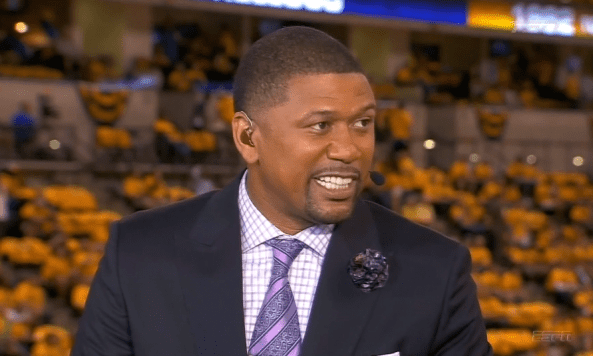 Rose's mother coined his given name from a combination of his father's name, James, and his uncle's name, Leonard. Rose's biological father Jimmy Walker was a former #1 overall pick who started in the backcourt alongside Jerry West in the 1972 NBA All-Star Game. Walker died in July 2007 of lung cancer. Although they eventually spoke several times over the phone, Rose never met his father in person. 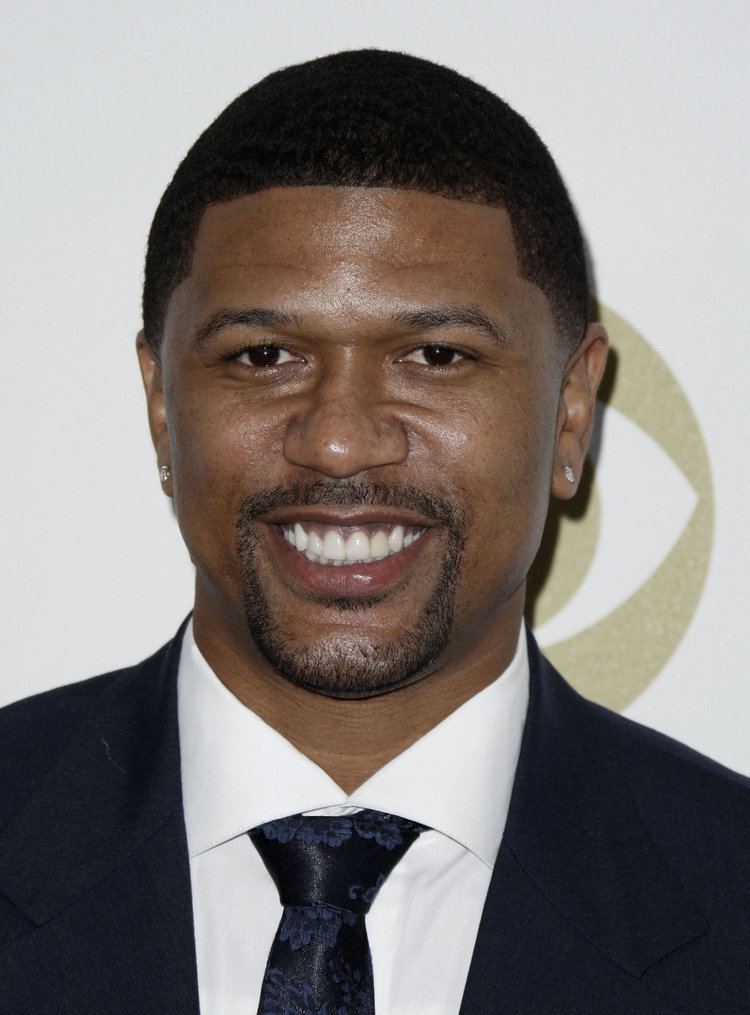 As a star at Southwestern High School in Detroit, where he was teammates with future NBA players Voshon Lenard and Howard Eisley, Rose obtained a high profile and can even be seen at a high school All-American camp in the documentary film, Hoop Dreams. Rose attended the University of Michigan where the Wolverines reached two NCAA Finals games in 1992 and 1993, finishing as national runners up both times. Rose was a part of Wolverines coach Steve Fisher's legendary 1991 recruiting class, dubbed the "Fab Five". He led the Fab Five in scoring his freshman year, averaging 19 points per game, and set the school freshman scoring record with 597 total points. Aside from being the most outspoken of the Fab Five, Rose was also their point guard and leader. With not winning a NCAA title, he racked up over 1700 points, 400 rebounds, 400 assists, and 100 steals. At 6-8 and playing as a versatile point guard, some reporters started comparing Rose to his schoolboy idol Magic Johnson. Of the players called before the grand jury (Robert Traylor, Webber, Rose, Maurice Taylor, and Louis Bullock) in the University of Michigan basketball scandal, Rose was the only one not listed as having received large amounts of money. 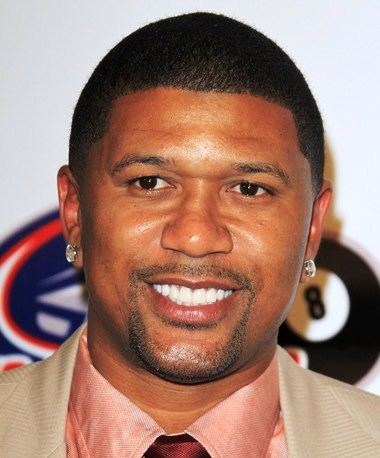 Rose played for six different NBA teams, forging a solid pro career after skipping his senior season at Michigan. He was selected 13th overall by the Denver Nuggets in the 1994 NBA draft. After two years with Denver, he was traded to the Indiana Pacers, along with Reggie Williams and a future first round draft pick, for Mark Jackson, Ricky Pierce, and a 1st round draft pick. Over the course of his 13-year NBA career, Rose earned more than $100,000,000 in salary compensation.

Despite his successes in Indiana, he was not readily accepted early on. Rose frequently logged DNPCDs (Did Not Play - Coach's Decision) under Coach Larry Brown. Rose also often spoke out about the fact he was being used as a backup two-guard and small forward over his preference, which was point guard. It was not until Larry Bird took over coaching duties did Rose finally begin to blossom, eventually realizing he was most effective at small forward.

Rose's greatest moments as a pro occurred as a member of the Indiana Pacers, as he helped the team get back on its feet after a disastrous 1996–97 season and make it to three consecutive Eastern Conference Finals appearances. Rose became the first player in eight years other than Reggie Miller to lead the Pacers in scoring in the 1999–2000 season when he averaged 18.2 points per game for the eventual Eastern Conference Champions. After helping lead his team to the 2000 NBA Finals, Rose went on to average 25 points per game in the six game series, including a 32-point effort in a game five win. However, the Pacers lost the series to the Los Angeles Lakers.

During the 2001–02 season, Rose was traded to the Chicago Bulls along with Travis Best, Norman Richardson, and a future second round draft pick in exchange for Brad Miller, Ron Mercer, Ron Artest and Kevin Ollie.

After 16 games in the 2003–04 season, Rose was traded to the Toronto Raptors, along with power forwards Donyell Marshall and Lonny Baxter.

On February 3, 2006, midway through the 2005–06 season, he was traded, along with a first-round draft pick, and an undisclosed sum of cash (believed to be around $3 million), to the New York Knicks for Antonio Davis, where he was reunited with Larry Brown, his coach for one year with the Indiana Pacers. The motivation behind this trade was apparently to free up cap space (Rose earned close to $16 million a year) as well as for the Raptors to acquire an experienced center who could relieve some of Chris Bosh's rebounding duties. Rose's final game and contribution for the Raptors was a home win against the Sacramento Kings, where he scored the winning basket in overtime.

Rose's tenure with the Knicks was uneventful and prior to the start of the 2006–07 NBA season on October 30, 2006, the Knicks parted ways with Rose by waiving him. He was courted by several teams including the Phoenix Suns, Detroit Pistons and Miami Heat.

On November 3, 2006, Rose announced he would sign with the Suns on his blog at jalenrose.com. On November 7, it was officially announced that Rose had signed a $1.5 million one-year deal with Phoenix.

As a member of the Phoenix Suns, Rose played minimum minutes. The fast-paced Suns offense was too fast for the aging swingman and his knees became a liability on defense. Upon the Suns' elimination from the 2007 NBA Playoffs, he retired as an active player and transitioned into a broadcasting career.

A left-handed player, Rose was known to have a smooth and versatile offensive game. Jalen was particularly gifted as a scorer from the perimeter or the post. Jalen was used throughout his career at three different positions. He began his career as a point guard for the Denver Nuggets and became a shooting guard/small forward for the Indiana Pacers. He then returned to the point guard position briefly with the Toronto Raptors. However, during his career he was most effective as a small forward or swingman. Jalen was also a good passer, especially for his height, and Indiana often employed him as a point forward. Not known for his defense, Rose's best moment defensively came during the 1997–1998 season, when Rose emerged as a defensive stopper on Michael Jordan in the Eastern Conference Finals, though the Bulls pulled out the series in seven games. Rose has sometimes been regarded as a team leader, particularly under head coach Larry Bird, though he reportedly was a disruptive force in the Pacers' locker room during his feud with the coach at that time Isiah Thomas, after Thomas cut former Fab Five teammate Jimmy King on the final day to do so before the 2000–2001 season.

While he showed a willingness in Toronto to work harder than ever (particularly on defense), Rose also frequently clashed with Raptors coach Sam Mitchell, who benched a struggling Jalen early in the 2005–06 season in favor of rookie Joey Graham.

In the following months, Rose at least raised his play to a more acceptable level. He increased his Player Efficiency Rating more than three whole points (to 13.7) while averaging 12.1 points, 2.5 assists, and 2.8 rebounds per game. However, he only shot 40.4% from the field and 27% from three-point range (including a 51.4 true shooting percentage) through 46 games.

Rose first got broadcasting experience as a courtside reporter for TNT during the 2006 playoffs after the Knicks were eliminated. Upon the Suns' elimination from the 2007 NBA Playoffs, he became a consistent commentator for ESPN giving regular insider perspective on the remaining playoff games from both a player's and analyst's perspective.

Since 2007, Rose has worked at ESPN, first as an analyst on SportsCenter and in 2012 he became one of the hosts for NBA Countdown. Rose and Bill Simmons replaced Chris Broussard and Jon Barry. Rose has also worked on ESPN's Grantland.com. He cohosts "Jalen and Jacoby," a podcast posted on Grantland and YouTube, with David Jacoby. Rose is slated to appear a panelist on German television network RTL Group's upcoming 2015 version of To Tell The Truth that will air on ABC.

The March 13, 2011 airing of the documentary The Fab Five, which Rose produced, sparked controversy that led to a series of media exchanges between members of the press, Michigan Wolverines men's basketball players and Duke Blue Devils men's basketball players in forums such as The New York Times, The Wall Street Journal and The Washington Post. The Fab Five earned a 2.1 rating to become ESPNʼs highest rated documentary, according to the Nielsen Company.

In August 2014, the National Basketball Retired Players Association named Jalen Rose as their Ambassador and Spokesperson. In this role, Rose shapes programs for former players while recruiting and enlisting the help of younger NBA players.

Jalen has personally donated more than $1.3 million through his foundation to support life-changing opportunities for underserved youth through the development of unique programs and the distribution of grants to qualified nonprofit organizations.

Jalen’s most substantial outreach initiative to date is the establishment of the Jalen Rose Leadership Academy (JRLA). The Academy opened its doors in September 2011 and is an open enrollment, tuition free, public charter high school on the Northwest side of Detroit. The Academy currently serves over 400 ninth through twelfth grade scholars and will host its first graduating class in June 2015. The mission is to provide a leadership-focused experience within a high-performing high school that engages and inspires Detroit area youth to achieve at the rigorous level necessary to ultimately graduate with a college degree and thrive in life. Jalen is the founder of JRLA and serves as the President of the Board of Directors.

Recently, the Detroit News recognized Jalen with the prestigious Michiganian of the Year Award in recognition of his excellence, courage and philanthropy to uplift not only the metropolitan area but all of Michigan. In a movement to transform public education, Jalen joins Michelle Rhee on the StudentsFirst Board of Directors and is an Ambassador for the American Federation for Children. In recent years Rose has become a community activist and a contributing editor of the Huffington Post.

In 2005, Rose earned a Bachelor of Science in Management Studies from the University of Maryland University College.

Rose remains an active supporter of his alma mater, the University of Michigan, and was seen rooting for their men's basketball team during the 2006 NIT Final Four with fellow ex-Wolverine, Maurice Taylor. He also was seen in Atlanta, Georgia for the Wolverines 2013 NCAA National Title game.