The Matrix Fiona Johnson role as Woman In The Red Dress

Fiona's character of the 'Woman in Red dress' is more of a simulated character and notable feature in the Matrix training program. The character usually appears harmless but is often used to distract. The character catches attention as she is the only character in the program's city street background that is shown wearing a vibrant Red color dress.  Other pedestrians' on the street are seen wearing black mostly.

She makes eye contact with the subject meant to be distracted and smiles flirtatiously at them upon crossing paths , Neo gets distracted by her during the matrix training session with morpheus and just moments later finds Agent Smith pointing a gun at him. Later on, another character in the film, Mouse, offers Neo some time with the 'woman in red dress who distracted him'. 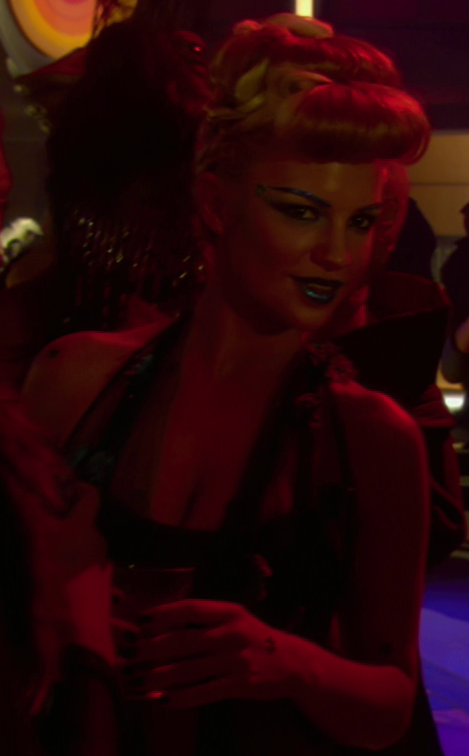 Fiona Johnson appeared in Star Wars Episode II - Attack of the Clones. She portrayed the role of Hayde Gofai a female Human and a patron of the Outlander Club on Coruscant in the series.
Fiona once again was roped in to play a really small but impactful character in another science fiction film Star Wars, after The Matrix. She appears in the popular 'bar scene' in the movie which has given rise to many fan theories after the film released.
In the scene, Obi-Wan and Anakin enter a bar and another patron named Matt Doran tries to sell Obi-Wan a "death stick." Just after 15 seconds, a blonde-haired woman is seeking attention from Anakin, exactly in the same way as the 'woman in red dress' in Matrix did. The woman's role was no one else but Fiona Johnson, portraying her character of Hayfe Gofai in the film.

Moreover, Matt Doran is also no one else but the same person who portrayed the role of Mouse in The Matrix. The striking similarity between both the characters has made fans curious about the connection between The Matrix and Star Wars.

Before landing a role in popular film franchise like Star Wars and The Matrix, Fiona Johnson was seen playing small roles in Backup in 1995 and in Playing The Game in 1995.

•  Fiona Johnson was born on July 26 in Australia.
•  She began her career in acting with 1995 TV series 'Backup'.
•  The Australian actress got her break in Hollywood with 1999 film The Matrix.
•  She played a short role of a woman who distracted Neo while he was chasing Agent Smith in the film.
•  She became famous as 'the woman in a red dress' after the film.
•  She bagged another role in the big Hollywood movie 'Star Wars' later.
•  The Australian was seen playing a similar role in Star Wars.
•  Fiona disappeared after her stint in the big Hollywood movies.
•  She shares her name with other famous celebrities like that of an Australian Hockey Player and the author of the book 'My Wild Ride' which tells the story of how the author Fiona Johnson fought with blood cancer.

The Matrix Behind The Scenes - Red Dress BY Fiona Johnson