Mary William Ethelbert Appleton "Billie" Burke (August 7, 1884 – May 14, 1970) was an American actress, famous on Broadway and in early silent film, but is primarily known to modern audiences as Glinda the Good Witch of the North in the movie musical The Wizard of Oz. She was nominated for the Academy Award for Best Supporting Actress in 1938 for her performance as Emily Kilbourne in Merrily We Live and is also remembered for her appearances in the Topper series. Billie Burke was the wife of Broadway producer Florenz Ziegfeld, Jr., of Ziegfeld Follies fame, from 1914 until his death in 1932. Her voice was unique in intonation, which she accentuated in her later character roles as dim-witted, spoiled society types. 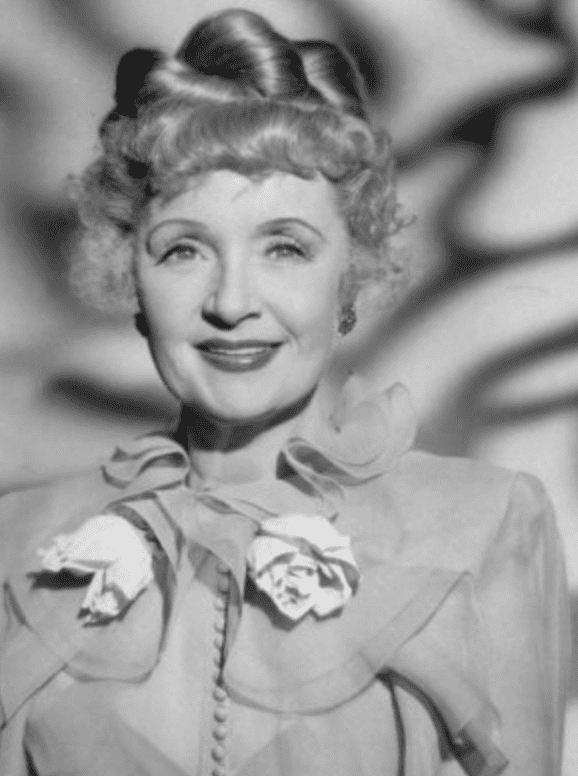 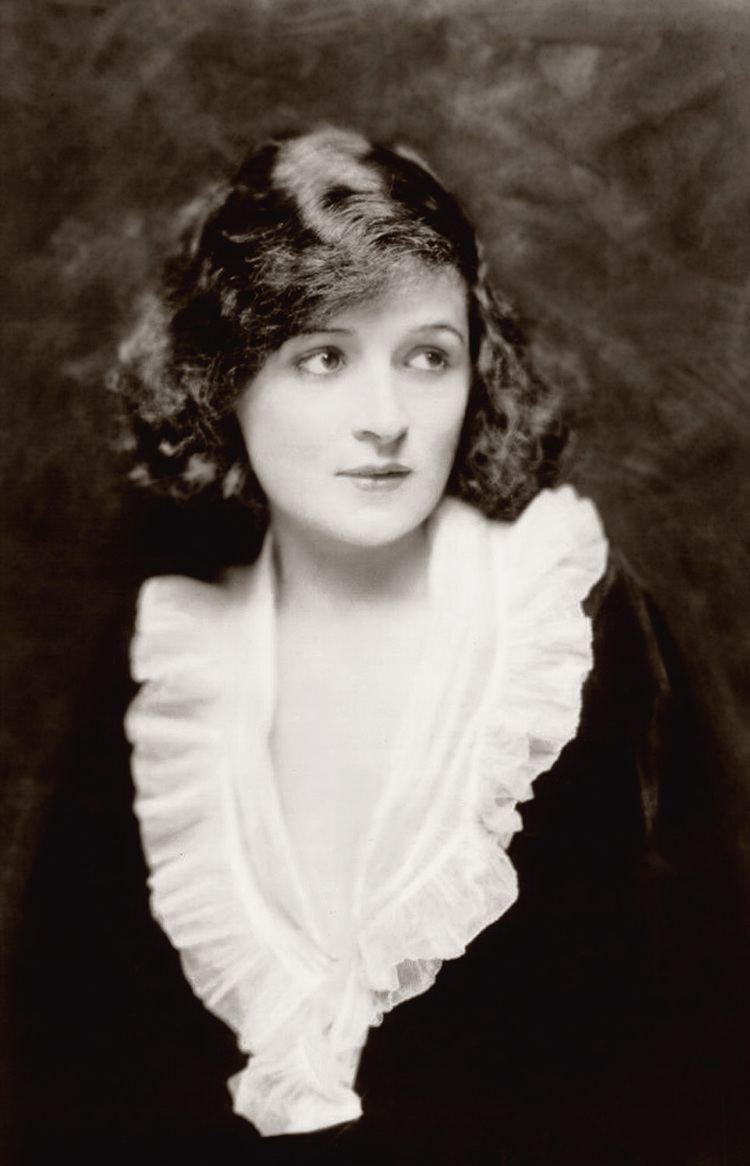 She was born Mary William Ethelbert Appleton Burke, the daughter of Blanche (nee Beatty 1844-1921) and William "Billy" Burke. She toured the United States and Europe with her father, who was a singer and clown, and worked for the Barnum & Bailey Circus. Her family ultimately settled in London where she attended plays in the West End. In 1903 she began acting on stage, making her debut in London in The School Girl. Other London shows included The Duchess of Dantzic (1903) and The Blue Moon (1904). She eventually returned to America to star in Broadway musical comedies. 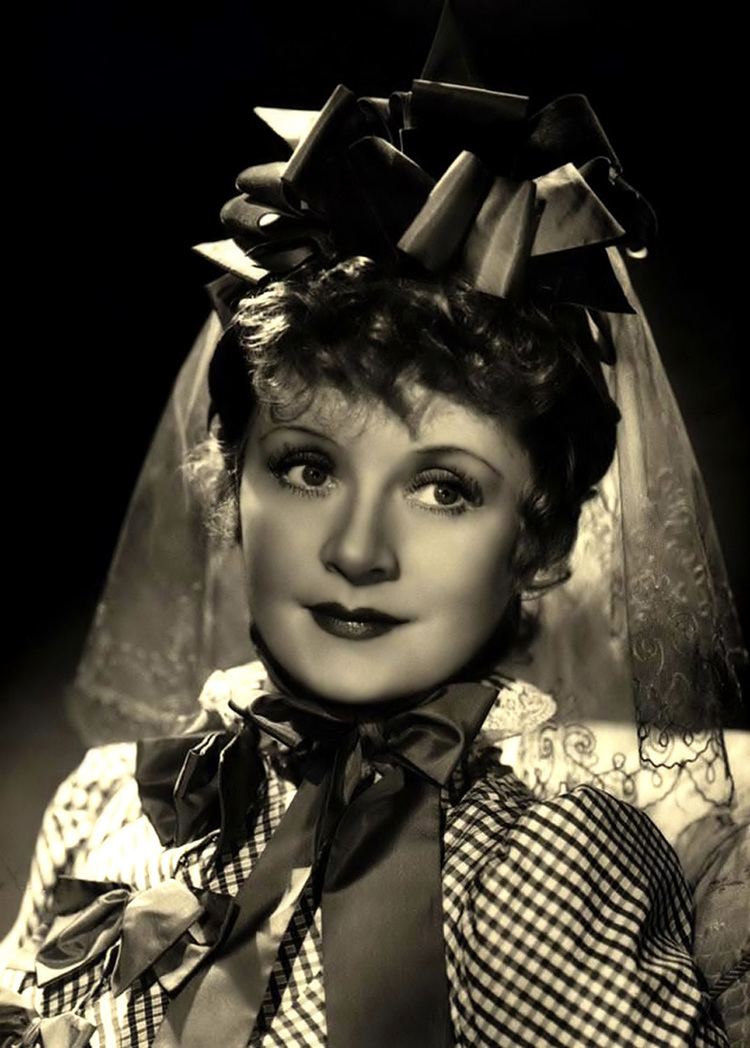 Burke went on to play leads on Broadway in Mrs. Dot, Suzanne, The Runaway, The "Mind-the-Paint" Girl, and The Land of Promise from 1910 to 1913, along with a supporting role in the revival of Sir Arthur Wing Pinero's The Amazons. There she caught the eye of producer Florenz Ziegfeld, marrying him in 1914. Two years later they had a daughter, Patricia Ziegfeld Stephenson (1916–2008). 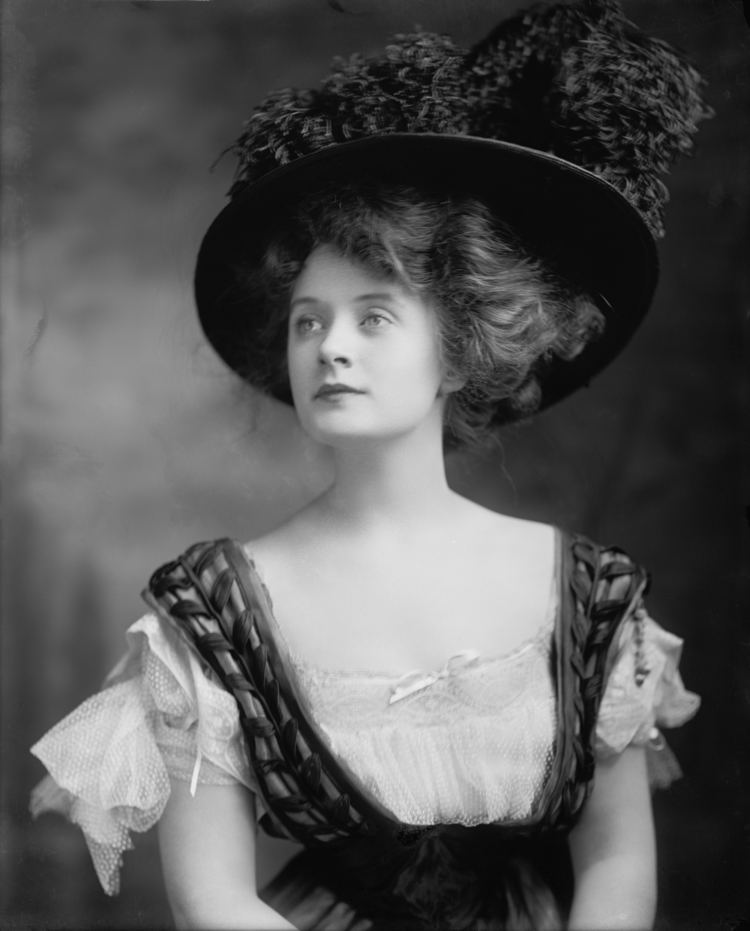 Burke was signed for the movies, making her cinematic debut in the title role of Peggy (1915). Her success was phenomenal, and she was soon earning what was reputedly the highest salary granted a motion picture actress up to that time. She followed her first feature with the 15-part serial Gloria's Romance (1916), another popular and critically acclaimed vehicle. By 1917 Billie Burke was a favorite with silent movie fans, rivaling Mary Pickford, Lillian Gish, Clara Kimball Young and Irene Castle. Billie Burke starred primarily in provocative society dramas and comedies, similar in theme to The "Mind-the-Paint" Girl, her most successful American play. The star's girlish charm rivaled her acting ability, and as she dressed to the hilt in fashionable gowns, furs and jewelry, her clothes sense also won the devotion of female audiences. Among the films in which she appeared during this period were Arms and the Girl (1917), The Mysterious Miss Terry, Let's Get a Divorce (1918), Good Gracious, Annabelle (1919), Away Goes Prudence (1920) and The Frisky Mrs. Johnson (1920). 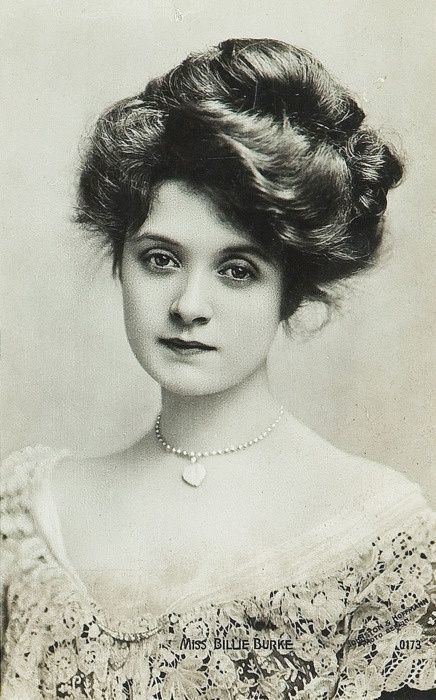 The actress's beauty and taste made her a major trendsetter throughout the 1910s and 20s. Much of her wardrobe, on screen and off, at this time was provided by the leading European couturier Lucile (in private life Lady Duff Gordon), whose New York branch was then the fashion mecca for socialites and entertainment celebrities. 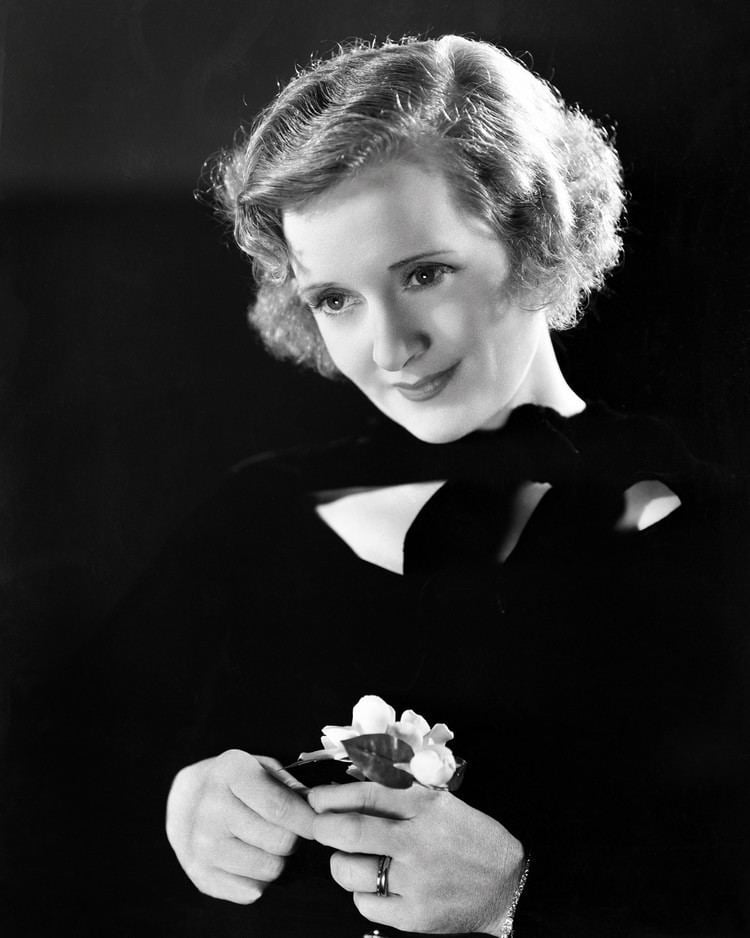 Despite her success in film, Billie Burke eventually returned to the stage, appearing in Caesar's Wife (1919), The Intimate Strangers (1921), The Marquise (1927) and The Happy Husband (1928). But when the family's savings were wiped out in the Crash of 1929, she took up screen acting again to aid her husband. 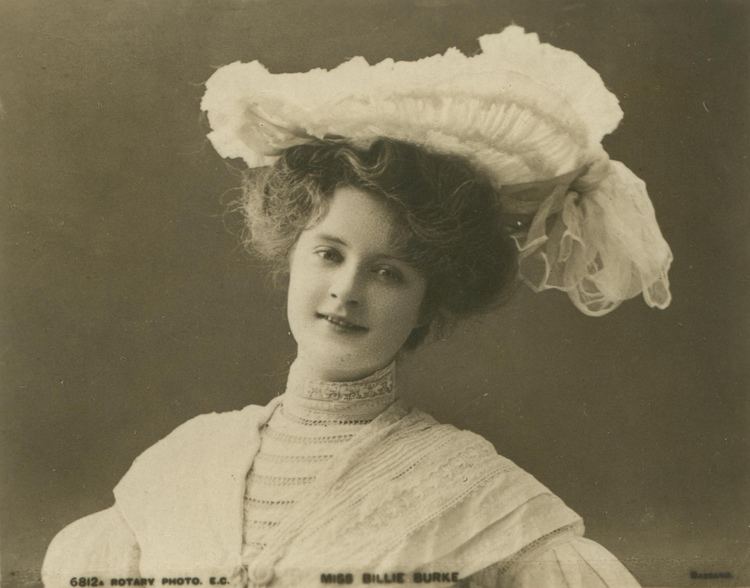 In 1932, Burke made her Hollywood comeback, starring as Margaret Fairfield in A Bill of Divorcement, directed by George Cukor. (She played Katharine Hepburn's mother in the film, which was Hepburn's debut). Despite the death of Florenz Ziegfeld during the film's production, she resumed filming shortly after his funeral.

In 1933, Burke was cast as Millicent Jordan, a scatterbrained high-society woman hosting a dinner party in the comedy Dinner at Eight, directed by George Cukor, co-starring with Lionel Barrymore, Marie Dressler, John Barrymore, Jean Harlow and Wallace Beery. The movie was a great success, and revived her career. She subsequently starred in many comedies and musicals, typecast as a ditzy, fluffy and feather-brained upper-class matron with her high-pitched voice.

In 1936, MGM filmed a sanitized biopic of Florenz Ziegfeld (The Great Ziegfeld), a film that won Academy Awards for Best Picture and Best Actress (Luise Rainer as Ziegfeld's common-law wife, Anna Held). William Powell played Flo Ziegfeld and Myrna Loy played Burke, which infuriated Burke because she was under contract to the studio and could have played herself, but MGM considered her too old to cast in the part despite her obviously having the look and mannerisms down perfectly otherwise.

In 1937 Burke appeared in the first of the Topper films, about a man haunted by two socialite ghosts (played by Cary Grant and Constance Bennett), in which she played the twittering and daffy Clara Topper. Her performance as Emily Kilbourne in Merrily We Live (1938) resulted in her only Oscar nomination. In 1938 she was chosen to play Glinda the Good Witch of the North, in the musical The Wizard of Oz (1939), directed by Victor Fleming, with Judy Garland. She had worked on a Garland film, Everybody Sing, in which she played Judy's histrionically hysterical actress-mother. Another successful film series followed with Father of the Bride (1950) and Father's Little Dividend (1951), both directed by Vincente Minnelli and starring Spencer Tracy, Joan Bennett, and Elizabeth Taylor.

Burke wrote two autobiographies, both with Cameron Van Shippe, With a Feather on My Nose (Appleton 1949) and With Powder on My Nose (Coward McCann, 1959).

On CBS Radio, The Billie Burke Show was heard on Saturday mornings from April 3, 1943 until September 21, 1946. Sponsored by Listerine, this situation comedy was initially titled Fashions in Rations during its first year. Portraying herself as a featherbrained Good Samaritan who lived "in the little white house on Sunnyview Lane," she always offered a helping hand to those in her neighborhood. She worked often in early television, appearing in the short-lived sitcom Doc Corkle (1952). She was a guest star on several TV and radio series, including Duffy's Tavern.

On television, Burke starred in her own talk show, At Home With Billie Burke, which ran on the DuMont Television Network from June 1951 through the spring of 1952. She was one of the first female talk show hosts, after the hostesses of the earlier DuMont series And Everything Nice (1949–50) and Fashions on Parade (1948–49) which both included some talk show segments.

Burke tried to make a comeback on the New York stage. She starred in two short-lived productions: This Rock and Mrs. January and Mr. X. Although she got good reviews, the plays did not. She appeared in several plays in California as well, although her mind became clouded, and she had trouble remembering lines. In the late 1950s, her failing memory led to her retirement from show business, although her explanation for that was, "Acting just wasn't any fun anymore."

Burke resided in Beverly Hills, California. She died in Los Angeles of natural causes on May 14, 1970, at the age of 85 and was interred at Kensico Cemetery, Valhalla, Westchester County, New York. At the time of her death, she was survived by her daughter, Patricia (now deceased), and four grandchildren.

For many years, Burke's framed photo was displayed above the exit staircase at New York's Ziegfeld Theatre; but it vanished after renovations. However, an opening night program, bearing a picture of her, from her 1912 triumph The Mind The Paint Girl (Sir Arthur Wing Pinero) is still displayed in the lobby of the Lyceum Theatre in New York City. A park in the New York City suburb of Hastings on Hudson, New York, is named the Burke Estate.

In 1960, for her contribution to motion pictures, she was honored with a star on the Hollywood Walk of Fame at 6617 Hollywood Boulevard.

On November 4, 2015, a crater near the north pole of the planet Mercury was named after her.