A sequel to "Before Sunrise," this film starts nine years later as Jesse (Ethan Hawke) travels across Europe giving readings from a book he wrote about the night he spent in Vienna with Celine (Julie Delpy). After his reading in Paris, Celine finds him, and they spend part of the day together before Jesse has to again leave for a flight. They are both in relationships now, and Jesse has a son, but as their strong feelings for each other start to return, both confess a longing for more. 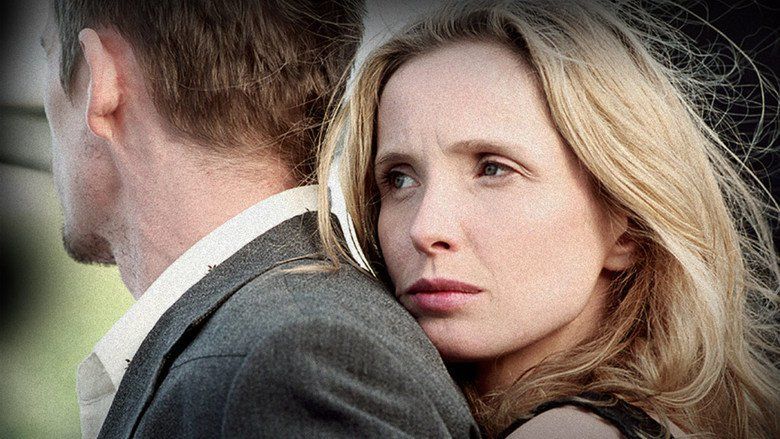 Before Sunset is a 2004 American romantic drama film, the sequel to Before Sunrise (1995). Like its predecessor, the film was directed by Richard Linklater. He shares screenplay credit with actors Ethan Hawke and Julie Delpy, and with Kim Krizan, the screenwriter for the first film featuring these two characters. 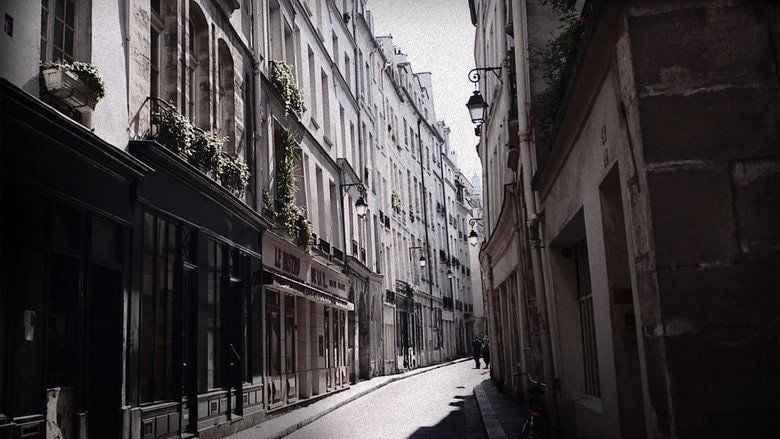 The film picks up the story in Before Sunrise of the young American man (Hawke) and French woman (Delpy) who spent a passionate night together in Vienna. Their paths intersect nine years later in Paris, and the film appears to take place in real time as they spend an afternoon together. 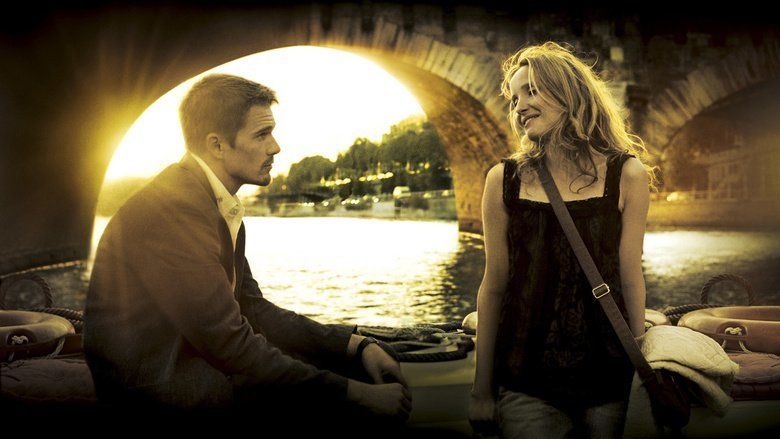 Before Sunset received broad critical acclaim with a 95% Fresh rating on Rotten Tomatoes. It was nominated for an Academy Award for Best Adapted Screenplay. 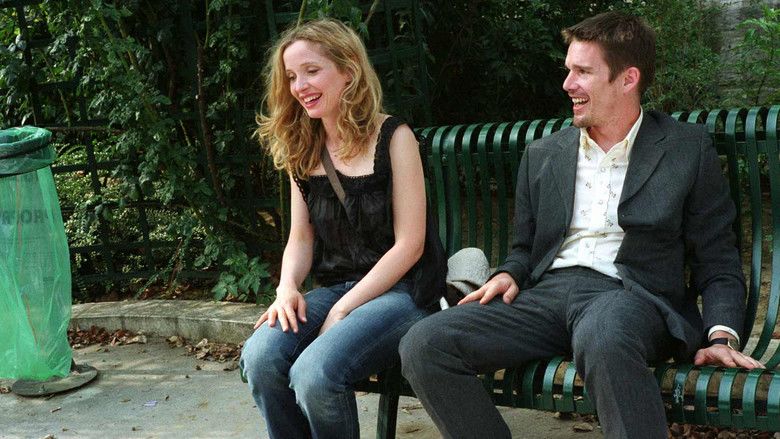 The directors and lead actors collaborated on another film following these characters, Before Midnight, which was released in 2013 and also gained acclaim. 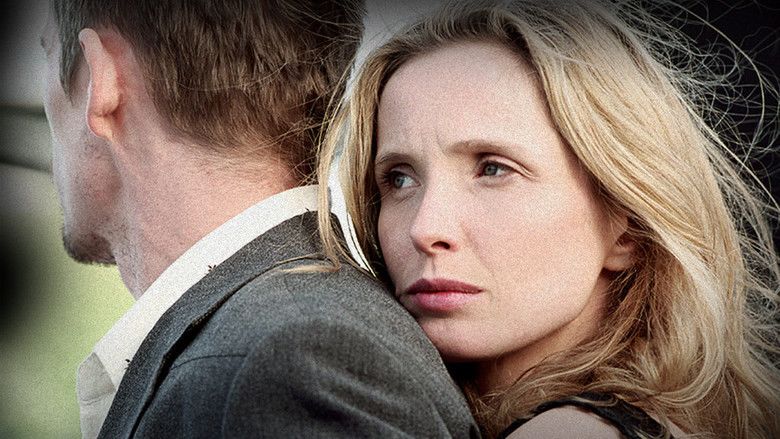 Nine years ago two strangers met by chance and spent a night in Vienna that ended before sunrise. They are about to meet for the first time since. Now they have one afternoon to find out if they belong together. 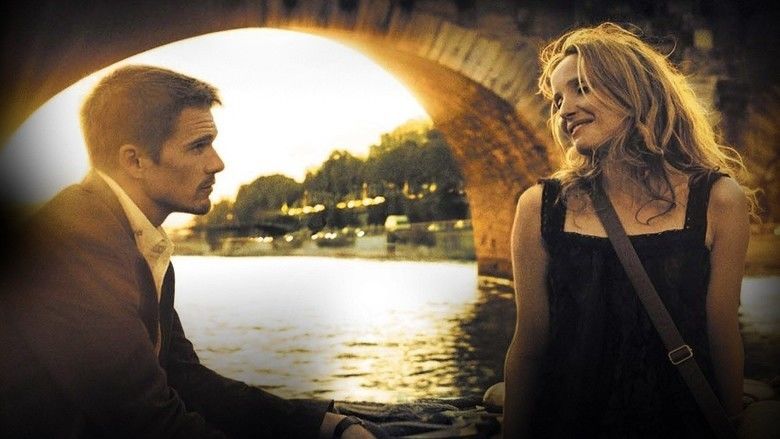 Nine years before, Jesse and Celine had met and had a brief encounter in Vienna. Jesses new novel, This Time, was inspired by that night, and becomes a bestseller. He does a book tour in Europe, including Paris. He does a reading at the noted bookstore, Shakespeare and Company. Flashbacks express elements of his time with Celine in Vienna. Three journalists attend the reading to interview Jesse: one is convinced the books main characters meet again, another that they do not, and a third who wants them to but is doubtful that will occur. As Jesse speaks with the audience, his eyes wander and he sees Celine there, smiling at him. 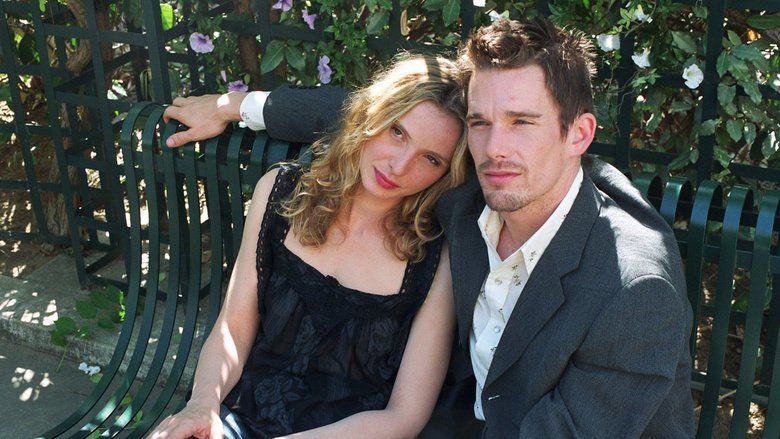 After the presentation, the bookstore manager reminds Jesse of his need to leave for the airport in about an hour for his plane. Celine and Jesses time together is again constrained. They make the best of it, and their conversations become deeply personal. They begin with themes of work and politics and, with increasing passion, approach their earlier feelings for each other. 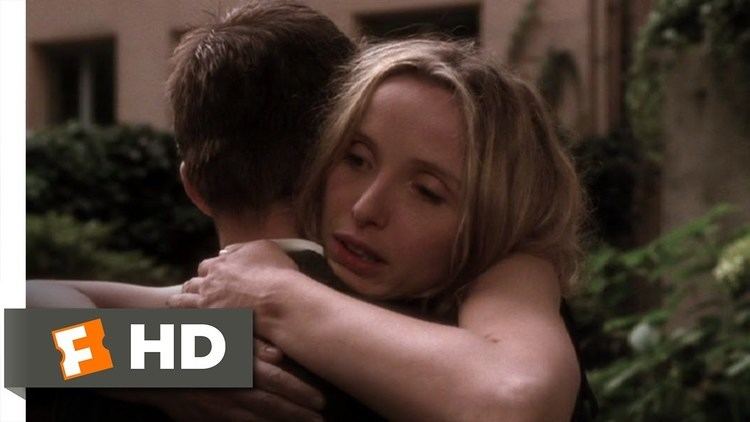 They touch on their failure to have met as planned six months after their first encounter. Jesse returned to Vienna but Celine did not, because her grandmother had died suddenly. Since the pair had never exchanged addresses, they had no way to contact each other at the time. 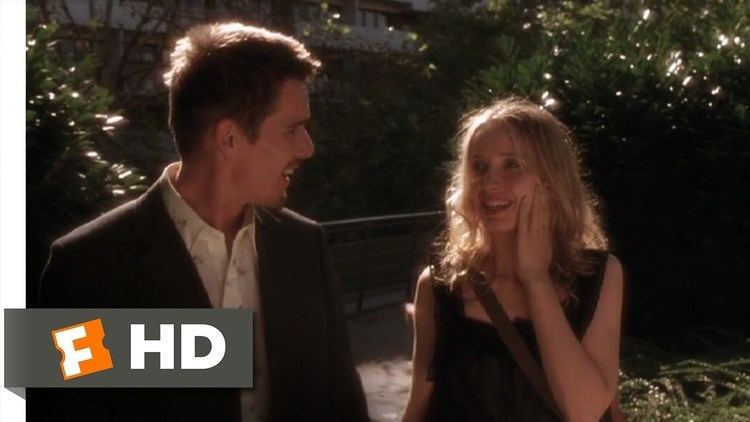 Their talk reveals their life changes. Jesse, now a writer, is married and has a son. Celine has become an advocate for the environment, and has a photojournalist boyfriend. They each express some dissatisfaction with their lives. 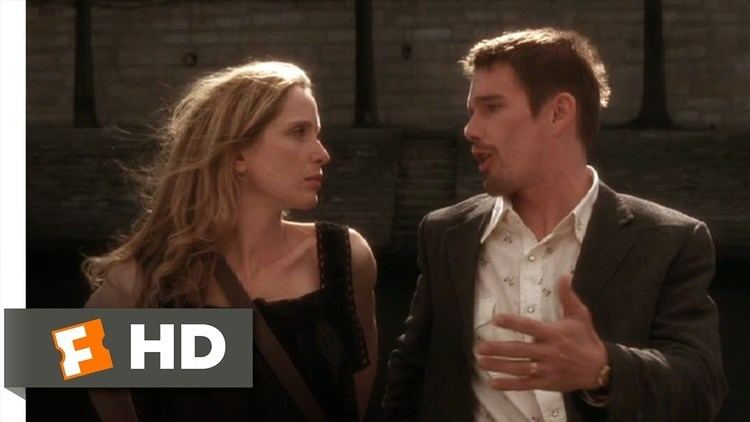 They talk as they walk in Paris, with scenes showing a cafe, garden, bateau mouche, and Jesses hired car. Their former feelings are slowly rekindled, as their one night together looms large in memory, unmarred by ordinary trials. Jesse says his book was inspired by his hope of seeing Celine again. She says that it brought back painful memories. They begin to approach each other tentatively but pull back. 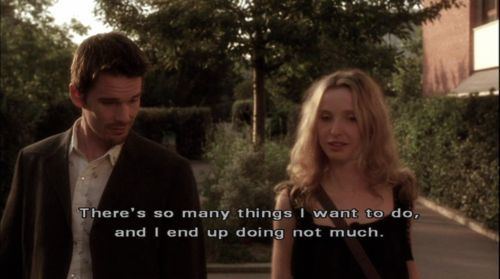 In the concluding scene, Celine and Jesse arrive at her apartment. Jesse persuades her to play a waltz on her guitar. Her song is about their earlier brief encounter. Jesse puts a Nina Simone CD on the stereo system. Celine dances to the song, "Just in Time," as Jesse watches her. Celine imitates Simone, saying, "Baby ... you are gonna miss that plane." Jesse smiles and says, "I know."

After the filming of Before Sunrise, Linklater, Hawke, and Delpy discussed making a sequel. Linklater considered a version to be filmed in four locations and with a much larger budget. When his proposal did not secure funding, he scaled back the concept of the movie. In a 2010 interview, Hawke said that the three had worked on several potential scripts over the years. As time passed and they did not secure funding, they adapted elements of the earlier scripts for Before Sunrise in their final draft of Before Sunset.

"we sat in a room and worked together in about a two- or three-day period, worked out a very detailed outline of the whole film in this sort of real-time environment. And then, over the next year or so, we just started e-mailing each other and faxing. I was sort of a conduit – they would send me monologues and dialogues and scenes and ideas, and I was editing, compiling and writing. And thats how we came up with a script."

Hawke said, "Its not like anybody was begging us to make a second film. We obviously did it because we wanted to."

The movie was filmed entirely on location in Paris. It opens inside the Shakespeare and Company bookstore on the Left Bank. Other locations include their walking through the Marais district of the 4th arrondissement, Le Pure Cafe in the 11th arrondissement, the Promenade Plantee park in the 12th arrondissement, on board a bateau mouche from Quai de la Tournelle to Quai Henri IV, the interior of a taxi, and finally "Celines apartment." Described in the film as located at 18 passage des Petites-Ecuries, it was filmed in Cour de lEtoile dOr off rue du Faubourg St-Antoine.

The movie was filmed in 15 days, on a budget of about US$2 million. The film is noted for its use of the Steadicam for tracking shots and its use of long takes. The longest of the Steadicam takes at about 11 minutes. As the summer was one of the hottest on record, the cast and crew suffered along with the city residents, as temperatures exceeded 100 degrees F (38 °C) for most of the production.

The film is notable for essentially taking place in real time, i.e. the time elapsed in the story is the run time of the film. In the fast-changing temperate Paris climate, this created challenges for the cinematographer Lee Daniel to match the color and intensity of the skies and ambient light from scene to scene. The scenes were mostly shot in sequence, as they were still developing the screenplay. Producer Anne Walker-McBay worked with less time and less money than she had on Before Sunrise, but still brought the film in on time and on budget. The sequel was released nine years after Before Sunrise, the same amount of time that has lapsed in the plot since the events of the first film.

The film was released in the wake of Hawkes divorce from Uma Thurman. Some commentators drew parallels between Hawkes personal life and the character of Jesse in the film. Additional comment has noted that both Hawke and Delpy incorporated elements of their own lives into the screenplay. Delpy wrote two of the songs featured in the film, and a third by her was included in the closing credits and movie soundtrack.

Before Sunset premiered at the Berlin International Film Festival in February 2004, and received a limited release in the United States on July 2, 2004.

Before Sunset received a highly positive reception from the critics. It held a 95% favorable rating at Rotten Tomatoes based on 159 reviews, and was assigned a weighted average score of 90/100 by Metacritic based on 39 reviews from mainstream publications, indicating "universal acclaim". The film appeared on 28 critics top 10 lists of the best films of 2004, and took the 27th spot on Metacritics list of The Best-Reviewed Movies of the Decade (2000–09). In the United Kingdom, the film was ranked the 110th-greatest movie of all time by a 2008 Empire poll. In 2010, the critics at The Guardian placed Before Sunrise/Before Sunset at number 3 in their list of the best romantic films of all time, and called the ending of Before Sunset "one of the most tantalising and ingenious endings in all cinema."

In comparing this film with the first featuring these characters, American film critic Roger Ebert wrote, "Before Sunrise was a remarkable celebration of the fascination of good dialogue. But Before Sunset is better, perhaps because the characters are older and wiser, perhaps because they have more to lose (or win), and perhaps because Hawke and Delpy wrote the dialogue themselves." In her review for the Los Angeles Times, Manohla Dargis lauded the film as a "deeper, truer work of art than the first," and praised director Linklater for making a film that "keeps faith with American cinema at its finest."

"Both Hawke and Delpy are excellent and their performances have real depth. This time, too, theyre doing more than appearing as fictional creations in a Richard Linklater film. They now share the writing credit with him and are clearly putting much of their experiences of the past decade into characters they have possessed and been possessed by."

On the merits of the script, A. O. Scott of The New York Times noted, it was "sometimes maddening," but "also enthralling, precisely because of its casual disregard for the usual imperatives of screenwriting." He elaborated,

"Cant they just say what they mean? Can you? Language, after all, is not just about points and meanings. It is a medium of communication, yes, but also of avoidance, misdirection, self-protection and plain confusion, all of which are among the themes of this movie, which captures a deep truth seldom acknowledged on screen or in books."

As noted by Metacritic, the film appeared on the following critics top 10 lists of 2004.

Linklater, Hawke, and Delpy all discussed the possibility of a sequel to Before Sunset. Hawke said he wanted to develop the relationship between Jesse and Celine, and said, "Ill be shocked if we never make another one".

In a video interview in November 2011, Hawke said that he, Delpy and Linklater "have been talking a lot in the last six months... all three of us have been having similar feelings that were kind of ready to revisit those characters... theres nine years between the first two movies... if we made the film next summer, it would be nine years again, so we started thinking that would be a good thing to do. So were going to try and write it this year." In June 2012, Hawke confirmed that the sequel to Before Sunset would be filmed in summer 2012. In September 2012, it was announced the sequel, entitled Before Midnight, had completed filming and would premiere at the Sundance Film Festival in January 2013. The film was released in May to widespread acclaim, and received an Academy Award nomination for Best Adapted Screenplay.