Shah Zaman Khan Afridi better known as Sudhir or Lala Sudhir (older brother in Pushto language) was a Pakistani film actor, director and producer. He is the only actor of early Pakistani cinema whose film career has been preserved. He is known as the first action hero of Pakistani cinema. His characters symbolized valour and bravery. Like Sultan Rahi, he appeared in the highest grossing films of Pakistan. 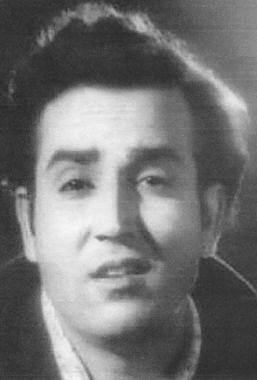 He started his career in a role in a Bollywood film named Farz in 1947. Afterwards, he migrated to Pakistan.

He migrated to Pakistan after the independence of Pakistan in 1947 and started his career in the Pakistani cinema. His first film was the successful Hachkolay in 1949. He appeared in Dupatta in 1952. In 1954, Sassi was the first ever film Urdu to reach a Golden Jubilee. Dulla Bhatti, Mahi Munda and Yakke wali were the highest grossing films of the time. Yakke wali was the first blockbuster Punjabi film while Dulla Bhatti was the first blockbuster Urdu film. These two led to building large studios in Pakistan. Sudhir was the hero of the Baghi in 1959, the first Pakistani film to be shown in China.

He was an action hero but appeared as Hatim Tai in Hatim (1956), Prince Saleem in the famous film Annar Kali (1958), Mirza Jat in Mirza Sahiban in 1956, Mehinwal in Sohni (1958) and Mirza Ghalib in Ghalib in 1961 and Nooran, Jhoomar and Gul Bakawli etc. He starred in one of the highest grossing Punjabi film Kartar Singh in 1959. He latter appeared in hits such as Farangi and Ajab Khan on the struggle against the British Raj. His 1965 film Jeedar was the first to reach a Platinum Jubilee. Maa Puttar was the first Punjabi to reach a Platinum Jubilee. He fought a real battle with tiger in Sahil in 1960. He appeared as a sidekick with his son in Dushman ki talash (1978).

At a very old age, he had a special appearance in PTV and was interviewed by Izhar Bobby.

He died on 13 May 1997. He married four times, twice in his family, then with Shammi and finally Pakistani another actress. His son from his second wife is Meer Zaman, also an actor.His younger son Sikandar Zaman from Shammi is married to Noor Jehan's granddaughter Fatima.