A scientists lover and assistant travels through numerous timelines to find out why he keeps disappearing and how to prevent time from erasing him forever. 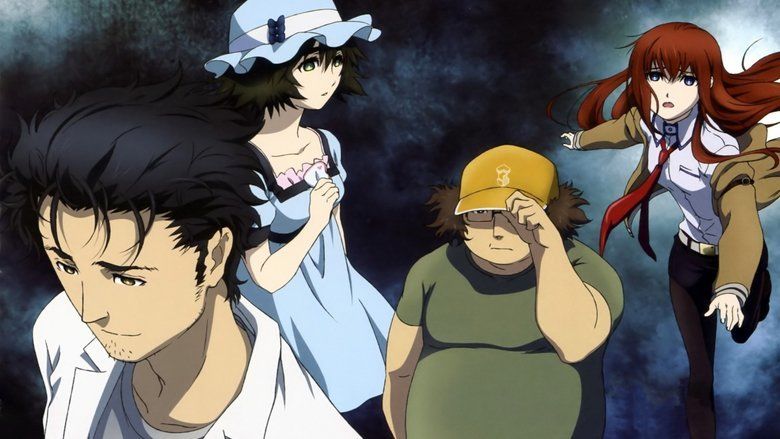 Steins;Gate: Fuka Ryoiki no Deja vu (, Gekijoban Shutainzu Geto: Fuka Ryoiki no Dejavu, lit. Steins;Gate the Movie: Burdened Domain of Deja vu) is a 2013 Japanese animated film produced by White Fox. It is the follow up to the 2011 television anime series, Steins;Gate, which was based on the visual novel by 5pb. and Nitroplus. The film premiered in Japanese theaters on April 20, 2013 and was released on BD/DVD on December 13, 2013. The film has been licensed in North America by Funimation.

The film takes place one year after the events of the anime series. After going through a painstaking journey across multiple 'World Lines' due to the invention of 'D-Mail', text messages that can be sent to the past, Rintarou Okabe has assumedly landed in the "Steins Gate" World Line, in which none of his friends would have to die and a future ruled by SERN due to the invention of a time machine no longer exists. However, Rintarou soon starts feeling the side effects of his constant time travelling across multiple World Lines, which soon builds up and causes Rintarou to suddenly vanish from existence, with only Kurisu Makise, the girl who he had saved thanks to his efforts, remembering him through déjà vu. It is now up to Kurisu to find a way to get Rintarou back.

The film takes place in August 2011, one year after the events of the anime series. After going through a painstaking journey across multiple World Lines due to the invention of D-Mail, text messages that can be sent to the past, Rintaro Okabe has assumedly landed in the "Steins Gate" World Line, in which he was able to prevent the deaths of both Mayuri Shiina and Kurisu Makise, as well as prevent a future ruled by SERN due to the invention of a time machine that no longer exists. On August 3, Kurisu arrives in Japan for a press conference and reunites with all the members of the Future Gadget Laboratory. Meanwhile, Rintaro starts having intense side effects from his time travels, seeing visions of alternate Worldlines. The next day on August 4, a mysterious visitor shows up at Kurisus hotel, telling her to remember three things: a cell phone, a microwave oven, and SERN. Later that day, as Kurisu is talking to Rintaro about how her own instances of deja vu may be similar to Rintaros Reading Steiner ability to remember things from other World Lines, Rintaro suddenly disappears before Kurisus eyes. Furthermore, no one else seems to remember Rintaro ever existed, with Kurisu barely retaining a faint memory of someone.

A week later on August 11, as Kurisu finds a fork that Rintaro left behind and remembers the words the stranger left her, she learns Itaru "Daru" Hashida had for some reason hacked SERN, suddenly giving her the urge to build a Time Leap machine. Using the machine, Kurisu leaps back to the night of August 3, where she observes Rintaro disappearing and reappearing from existence, with everyones memories of him changing accordingly. She is then contacted by the visitor from before, revealed to be Suzuha Amane, who came from the future using a time machine Kurisu built. She explains to both Kurisu and Rintaro that all the memories of World Lines Rintaro had visited is overloading his Reading Steiner, causing him to fluctuate between the current world line and the "R" world line, the only other world line where neither Mayuri nor Kurisu die. Suzuha states the only way to save him from vanishing completely is to use a time machine to travel to the past, but Rintaro ostensibly refuses, as he feels neither time machines nor time leap machines should exist and doesnt want Kurisu to go through the same suffering he went through, saying he would rather disappear to allow her and Mayuri to live in peace. He instead urges Kurisu to forget about him, leaving her with a kiss.

As Rintaro disappears once again the next day, Kurisu breaks down in tears before grudgingly deciding to accept his wish and try to forget him. Later, on August 13, as the Future Gadget Lab gets word that it might have to close up, Kurisu is once again approached by Suzuha, who tells her that she is not being honest with her own feelings, eventually convincing Kurisu to go with her in her time machine. In order to keep Rintaro in the Steins Gate world line, he must be implanted with a powerful memory that helps distinguish it from other world lines. The two travel back to June 30, 2005, where Kurisu attempts to talk with the young Rintaro, only to result in him getting into a car accident instead, leaving her too afraid to attempt another trip to the past. Back in the present, Kurisu discovers Mayuri and the others also possess faint memories of Rintaro, which are soon awakened when she does an imitation of his persona, Kyoma Hooin. Encouraged by everyones feelings, Kurisu returns to the past, this time succeeding in her mission by implanting the concept of Kyoma Hooin into Rintaros mind and giving him her first kiss, which led him to take on his mad scientist persona to protect Mayuri. With this, Kurisu manages to bring Rintaro back to the Steins Gate world line and the movie ends with Rintaro asking Kurisu if she will return his first kiss to him. Smiling, Kurisu says "Never.".

Steins;Gate: Fuka Ryoiki no Deja vu was first announced at the end of the television anime series on September 13, 2011. The opening theme is "Anata no Eranda Kono Toki o" (, The Moment You Made Your Decision) by Kanako Ito while the ending theme is "Itsumo Kono Basho de" (, Always in this Place) by Ayane.

The film was released in both DVD and Blu-ray Disc home video versions in Japan on December 13, 2013. Several versions were released; a standard DVD edition, a standard Blu-ray Disc edition, a five-disc combo pack containing several radio dramas, and a six-disc combo pack containing the radio dramas in addition to the films soundtrack. Additional items were shipped depending on the retailer. The Japanese release also includes English subtitles.

Richard Eisenbeis and Toshi Nakamura of Kotaku stated, "This movie really lives or dies on how well you connect to Kurisu and OkabeÃ¢â‚¬â€� and given the amazing performances of their voice actors, I cant imagine not being able to," and proceeded to call it, "An excellent epilogue to the Steins;Gate story."

A two-volume novel series, written by Tatsuya Hamazaki and illustrated by Huke, Kyuta Sakai, and Bun150, was published by Kadokawa Shoten under their Kadokawa Sneaker Bunko imprint. The two volumes were released on May 1 and June 1, 2013.