Santa Barbara is the county seat of Santa Barbara County, California. Situated on a south-facing section of coastline, the longest such section on the West Coast of the United States, the city lies between the steeply rising Santa Ynez Mountains and the Pacific Ocean. Santa Barbaras climate is often described as Mediterranean, and the city has been promoted as the "American Riviera". As of the census of 2010, the city had a population of 88,410, a loss of 1,190 from the previous census, making it the second most populous city in the county after Santa Maria while the contiguous urban area, which includes the cities of Goleta and Carpinteria, along with the unincorporated regions of Isla Vista, Montecito, Mission Canyon, Hope Ranch, Summerland, and others, has an approximate population of 220,000. The population of the entire county in 2010 was 423,895.

In addition to being a popular tourist and resort destination, the city economy includes a large service sector, education, technology, health care, finance, agriculture, manufacturing, and local government. In 2004, the service sector accounted for fully 35% of local employment. Education in particular is well represented, with five institutions of higher learning on the south coast (the University of California, Santa Barbara, Santa Barbara City College, Westmont College, Antioch University, and the Brooks Institute of Photography). The Santa Barbara Airport serves the city, as does Amtrak. U.S. Highway 101 connects the Santa Barbara area with Los Angeles to the southeast and San Francisco to the northwest. Behind the city, in and beyond the Santa Ynez Mountains, is the Los Padres National Forest, which contains several remote wilderness areas. Channel Islands National Park and Channel Islands National Marine Sanctuary are located approximately 20 miles (32 km) offshore.

Evidence of human habitation of the area begins at least 13,000 years ago. Evidence for a Paleoindian presence includes a fluted Clovis-like point found in the 1980s along the western Santa Barbara County coast, as well as the remains of Arlington Springs Man, found on Santa Rosa Island in the 1960s. An estimated 8,000 to 10,000 Chumash lived on the south coast of Santa Barbara County at the time of the first European explorations. 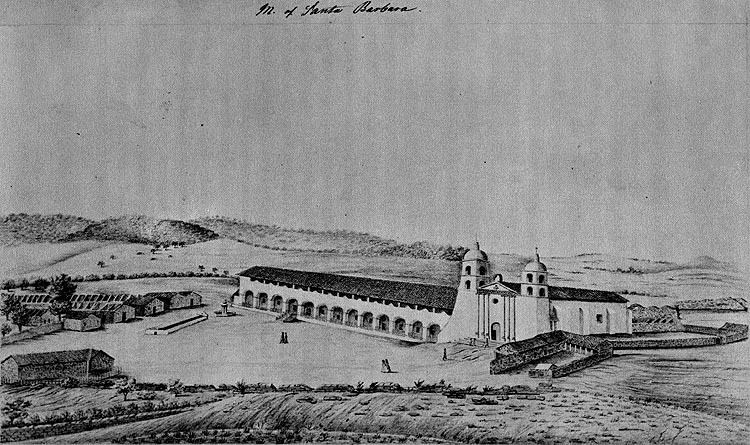 Five villages flourished in what is today Santa Barbara: 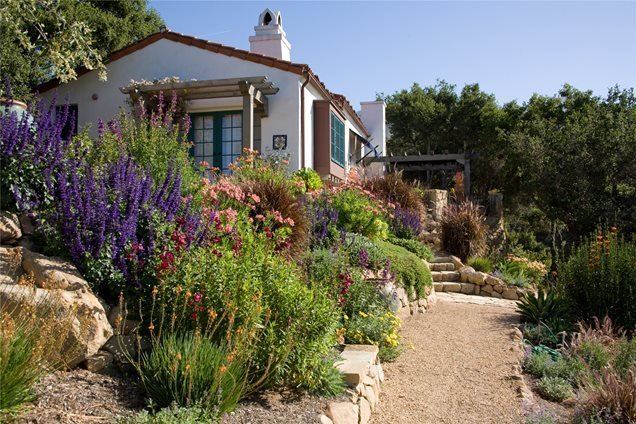 Santa Barbara is located about 90 miles (145 km) WNW of Los Angeles, along the Pacific coast. This stretch of coast along southern Santa Barbara County is sometimes referred to as "The American Riviera", presumably because its geography and climate are similar to that of areas along the northern Mediterranean Sea coast (especially in southern France) known as the Riviera. The Santa Ynez Mountains, an east–west trending range, rise dramatically behind the city, with several peaks exceeding 4,000 feet (1,200 m). Covered with chaparral and sandstone outcrops, they make a scenic backdrop to the town. Sometimes, perhaps once every three years, snow falls on the mountains, but it rarely stays for more than a few days. Nearer to town, directly east and adjacent to Mission Santa Barbara, is an east-west ridge known locally as "the Riviera," traversed by a road called "Alameda Padre Serra" (shortened APS, which translates to "Father Serras pathway"). 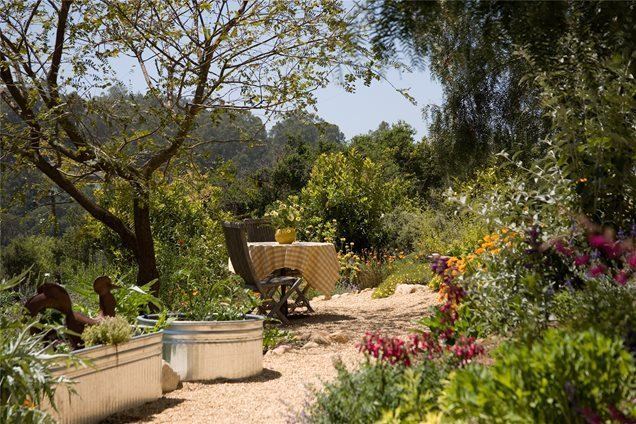 According to the United States Census Bureau, the city has a total area of 42.0 square miles (108.8 km2), of which 19.5 square miles (51 km2) of it is land and 22.5 square miles (58 km2) of it (53.61%) is water. The high official figures for water is due to the extension of the city limit into the ocean, including a strip of city reaching out into the sea and inland again to keep the Santa Barbara Airport (SBA) within the city boundary.

Aerospace and defense companies form the basis of the citys private employment as Alliant Techsystems, Channel Technologies Group, Citrix Online, and Raytheon have major operations in the area. Santa Barbaras tourist attractions have made the hospitality industry into a major player in the regional economy. Motel 6 was started in Santa Barbara in 1962.

Santa Barbara contains numerous performing art venues, including the 2,000 seat Arlington Theatre, is the largest indoor performance venue in Santa Barbara and also serves as the premise for the annual Santa Barbara International Film Festival. The Lobero Theatre, a historic building and favorite venue for small concerts; the Granada Theater, the tallest building downtown, originally built by contractor C.B. Urton in 1924, but with the theatre remodeled and reopened in March 2008; and the Santa Barbara Bowl, a 4,562 seat amphitheatre used for outdoor concerts, nestled in a picturesque canyon northwest of Santa Barbara at the base of the Riviera.

The city is considered a haven for classical music lovers with a symphony orchestra, a part-time opera company, and many non-profit classical music groups (such as CAMA). The Music Academy of the West, located in Montecito, hosts an annual music festival in the summer, drawing renowned students and professionals.

The Loud family, subjects of the very first reality TV series, PBSs An American Family, called Santa Barbara home since the early 1960s (moving there from Eugene, Oregon) and throughout the series, all the family members save for Lance (who lived in New York City at the time) were filmed going about their daily lives in Santa Barbara. Bills foundry supply company was headquartered in downtown Santa Barbara.

In the ABC television series Voyage to the Bottom of the Sea, the fictional privately owned nuclear-powered submarine Seaview was based at the equally fictional Nelson Institute of Marine Research located in Santa Barbara.

The 1980s soap opera Santa Barbara is set within its namesake city.

Santa Teresa is a fictional version of Santa Barbara used in the mystery novels of Ross Macdonald and Sue Grafton.

The 1999 film My Favorite Martian was filmed on location in Santa Barbara. While the opening shot shows fictional TV station KGSC Channel 10, KEYT Channel 3 was actually used for the filming location.

Several city vistas were used to represent Sunnydale in Buffy the Vampire Slayer.

The USA Network television show Psych features a fake psychic working for the Santa Barbara Police Department. The show, however, is not filmed on location. It is filmed in Vancouver, British Columbia, Canada.

Diners, Drive-Ins and Dives episodes Scratch Made Classics and Global Traditions on the Food Network each have a segment at restaurants in Santa Barbara.

The television show $40 a Day showed an episode in Santa Barbara.

The 2009 film Its Complicated is set in Santa Barbara.

Santa Barbara is the hometown of Grammy nominated popstar, Katy Perry who filmed her music video "Teenage Dream" in the city.

The song "Hannah Hunt" by Vampire Weekend refers to Santa Barbara as a place where the namesake character had cried.

The Santa Barbara Museum of Art (SBMA), located on State Street, features nationally recognized collections and special exhibitions of international importance. Highlights of the Museums remarkable permanent collection include antiquities; 19th-century French, British, and American art; 20th-century and contemporary European, North American, and Latin American art; Asian art; photography; and works on paper. It is also recognized for its innovative education program that serves local and surrounding communities through extensive on-site programming and curriculum resources. Museum of Contemporary Art Santa Barbara (MCASB), located on the top floor of Paseo Nuevo shopping mall, is a non-profit, non-collecting museum dedicated to the exhibition, education, and cultivation of the arts of our time. The premier venue for contemporary art between Los Angeles and San Francisco, MCASB offers free admission to its exhibitions and public programming. Other art venues include the University Art Museum on the University of California at Santa Barbara Campus, various private galleries, and a wide variety of art and photography shows. The Santa Barbara Museum of Natural History is located immediately behind the Santa Barbara Mission in a complex of Mission-style buildings set in a park-like campus. The Museum offers indoor and outdoor exhibits and a state-of-the-art planetarium. The Santa Barbara Historical Museum is located on De La Guerra Street and offers free admission. The Santa Barbara Maritime Museum is located at 113 Harbor Way (the former Naval Reserve Center Santa Barbara) on the waterfront. The Karpeles Manuscript Library Museum (free admission) houses a collection of historical documents and manuscripts. Two open air museums here are Lotusland and Casa del Herrero, exemplifying the American Country Place era in Santa Barbara. Casa Dolores, center for the popular arts of Mexico, is devoted to the collection, preservation, study, and exhibition of an extensive variety of objects of the popular arts of Mexico.