Salt N Pepper is a 2011 Indian Malayalam romantic comedy film directed by Aashiq Abu and produced for Lucsam Creations by Sadanandan Rangorath. The film stars Lal, Asif Ali, Shweta Menon and Mythili in the lead roles while Baburaj and Vijayaraghavan play supporting roles. Cinematography is by Shyju Kahild, whose debut was Traffic (2011). The screenplay was written by Shyam Pushkaran and Dileesh Nair. 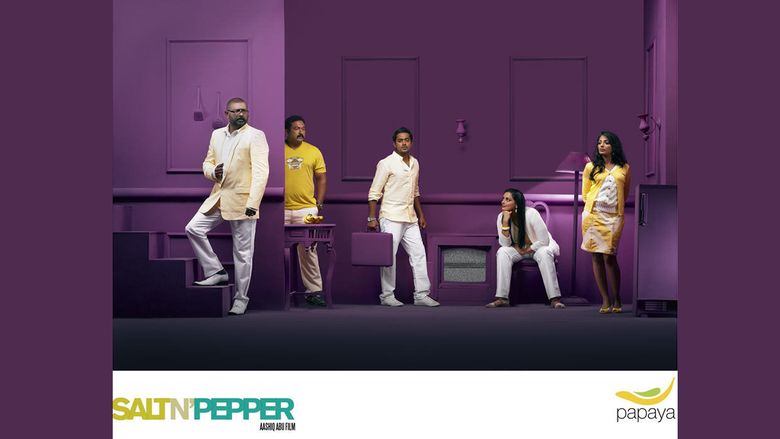 The film follows the love stories of two couples. The main characters are: Kalidasan (Lal), an archaeologist; Maya (Shwetha Menon), a dubbing artiste; Meenakshi (Mythili), an IELTS student; Manu (Asif Ali), a happy-go-lucky management graduate; and Babu (Baburaj), Kalidasans chef. Food plays an important role in the story and the tagline of the film is Oru Dosa Undakkiya Katha ("The story born out of a Dosa").

The film has an original score by Bijibal, with three songs composed by Bijibal and the song "Aanakkallan" written and sung by Malayalam rock band Avial. The film was produced by Lucsam Cinema and released by Lal. Principal production for the film started on 3 January 2011 and it was released in theatres on 8 July 2011 to positive reviews and good initial viewing figures.

Salt N Peppers Kannada, Tamil, Telugu and Hindi remake rights have been bought by actor-director Prakash Raj. It was remade in Tamil as Un Samayal Arayil and was shot simultaneously in Telugu and Kannada as Ulavacharu Biriyani and Oggarane. Prakash Raj directed the remakes and appeared in the lead role playing Lals character while Sneha did the role of Shweta Menons character.

Salt N' Pepper is a 2011 Indian romantic comedy film directed by Aashiq Abu and produced for Lucsam Creations by Sadanandan Lucsam and Debobroto Mandal . The film stars Lal, Asif Ali, Shweta Menon and Mythili in the lead roles while Baburaj and Vijayaraghavan play supporting roles. Cinematography is by Shyju Kahild, who's debut was Traffic (2011). The screenplay was written by Shyam Pushkaran and Dileesh Nair. The film follows the love stories of two couples. The main characters are: Kalidasan (Lal), an archaeologist; Maya (Shwetha Menon), a dubbing artiste; Meenakshi (Mythili), an IELTS student; Manu (Asif Ali), a happy-go-lucky management graduate; and Babu, Kalidasan's chef. Food plays an important role in the story and the tagline of the film is Oru Dosa Undakkiya Katha ("The story born out of a Dosa").[2]

Kalidasan (Lal) works in the state archaeological department in Thiruvananthapuram (Trivandrum) and is a food lover. His only companion is his cook, Babu (Baburaj). Manu Raghav (Asif Ali) is Kalidasans nephew who comes to stay with him, while looking for a job. Kalidasan has a normal life until he gets a mis-dialled phone call from Maya (Shweta Menon), a dubbing artiste living with her friend Meenakshi (Mythili). Maya rings to order a special Dosa (named "Thattil Kutti Dosa" in the film) from a restaurant, but gets Kalidasan instead. Their conversations do not go well at first, but a long-distance romance develops due to their common interestÃ¢â‚¬â€�cooking and food. Kalidasan is a born gourmet while Maya is indulging in culinary activities in memory of her dead mother. Kalidasan starts to let Maya into the secrets of baking with a multi-layered cake called "Joans Rainbow".

The film centres around food and Aashiq Abu says: "For a society that is so fond of food, this genre of cinema has not been really explored much in Mollywood [Malayalam cinema], save for a few films. As a foodie, I was inspired to make a film centred on food when I came across this interesting script by Syam Pushkaran and Dileesh Nair."

The film often mentions Kerala cuisine. The title song "Chembavu", which features visuals of famous eateries across Kerala such as the hotels Zain, Sagar, Paragon, Bombay, Buhari, Ananda Bhavan, Paradise, etc. as well as the unique three-metre-tea at a stall in Kumbalangi. It also portrays some Kerala specialities such as Malabar Erachi pathiri. The lyrics of the song written by Rafeeque Ahammed, contains food.

The reason for the mis-dialled call, Thattil Kutty Dosa, is a local speciality. The relationship develops between Kalidasan and Maya around the secrets of baking a multi-layered cake known as Joans Rainbow. The legend of Joans Rainbow is described by Nita Sathyendran in The Hindu:

The story goes that at the end of the Second World War, a French soldiers wife started baking a strawberry cake to give her husband when he returned from the War. He didnt turn up that day, nor did he the next day when she had added a pistachio-flavoured layer to the cake. On the third day she baked a third layer, one in orange flavour, but he didnt come that day either. On the fourth day when she was about to lose hope, her husband arrived bearing a box of chocolates! The woman is said to have melted the chocolates and made a fourth layer, and served the rainbow of layers to her husband, sealing their bond of love forever.

According to Abu, "Salt N Pepper is meant to be a light-hearted entertainer; its nothing serious Ã¢â‚¬â€œ no big plots, no big twists Ã¢â‚¬â€œ but plain old common sense, and dollops of good ol fun."

The film was scripted by first-time writers Syam Pushkaran and Dileesh Nair who said, "We had a one-liner ready and had approached a few directors. Although most of them liked what they heard, no one was willing to turn it into a movie. Then along came director Aashiq Abu of Daddy Cool fame. Lucky for us Aashiq was looking for a light-hearted script, something to do before his next superstar film came through. He loved our one-liner enough to give us an advance on the spot and asked us to come back with a full-fledged script". The duo was inspired by films such as Ponmuttayidunna Tharavu, Meleparambil Aanveedu, Kodiyettam and Yavanika, and the literary works of Vaikom Muhammad Basheer.

Filming began eight months after the script was submitted, and was launched on 5 Jan 2011 with a blessing held at BTH Sarovaram, Kochi. The ceremony als included film producer Naushad making a dosa on stage. Principal production for the film started on 3 January 2011 and was shot entirely in Thiruvananthapuram.

The film received generally positive reviews, although some critics felt that certain scenes were far from convincing. In the Deccan Chronicle, Keerthy Ramachandran gave the film a three-star rating writing "This is a movie which weaves together taste, flavor and love to make an exquisite recipe for good cinema. A must watch for all gourmets, Salt N Pepper is sweet humour interspersed in a light plot." She also described the film as "one of the most enjoyable films of recent times." and praised the cast performances stating, "Shwetha Menon has acted brilliantly in the movie, proving that she has more to her than meets the eye. Lal has done complete justice to the role and appears likeable throughout the movie. But, the major share of credit should go to Baburaj Ã¢â‚¬â€œ the stereotypical villain in Malayalam cinema. The role of KalidasanÃ¢â‚¬â„¢s cook is a milestone in his career. Asif Ali and Mythili appear perfect in their roles. Actor Vijaya Raghavan in a cameo has made a commendable appearance."

Navamy Sudhish of The New Indian Express said, "A delightful addition to GenY fun flicks, Ã¢â‚¬ËœSalt N PepperÃ¢â‚¬â„¢ is an out-and-out entertainer. It gives two hoots to time-tested tricks and indulges you with a stimulating storyline and unfeigned artistry." He labelled the script "smart", Shyju Khalids appearances "rich" and "peachy", and Bijibals background score "superb". Sudhish also praised Abu saying "[his] narrative technique is unpretentious and devoid of any jaded gimmickry." Paresh C. Palicha of Rediff.com said, "Director Aashiq Abu has put together the right ingredients in his new film Salt N Pepper and come up with quite an interesting dish" and that the film will meet the tastes of all who watch it. Veeyen of Nowrunning.com said, "Aashiq Abu and his team adhere to the golden rules of good cooking, and see to it that the griddle is all hot, before they gently spread out a light hearted Dosa story on it." The critic also praised the cast performances and Shyju Kahlids cinematography. A reviewer from Sify.com said, "Salt N Pepper may have its own share of shortcomings, but the sincerity with which it has been made is there to be seen in the film. ItÃ¢â‚¬â„¢s a young film which oozes lots of freshness and it is enjoyable for people of all ages, especially if you love your food.".

The film became a sleeper hit in the box office, completing a running of 100 days at many centres in Kerala. The 100th day celebration of the film was held in Dubai on 27 October with a concert by Avial. Bijibal also performed at the event.

The soundtrack to the film features three songs composed by Bijibal, two romantic melodies and a folk song, and a song written by Malayalee rock band Avial, "Aanakkallan". It is the bands first release since their self-titled debut album released in 2008. Avial singer Tony John says that "this song is more or less like a teaser for our second album". A music video was filmed which shows in the film at the end. John said: "We had loads of fun shooting the video, which is very kind of like what you would see in a music video rather than a filmy number". The video, directed by Aashiq Abu, is the second one for Avial after their first hit "Nada Nada". It is also the first Avial track with John as the lead singer and Benjamin Isaac as the bass player.