Roger Garcia Junyent (born 15 December 1976), known simply as Roger, is a Spanish retired footballer who played mostly as a left midfielder. He possessed a strong shot, and was known for his passing ability. 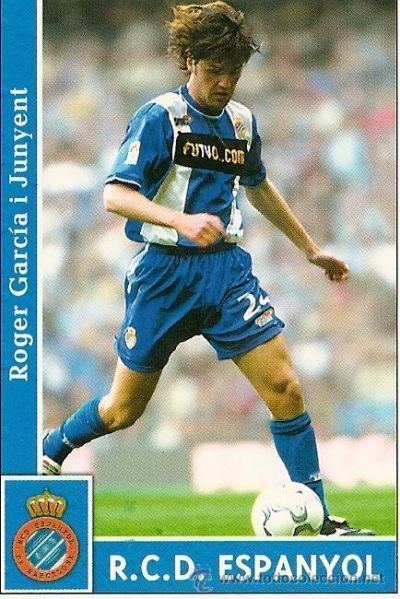 He spent most of his career at FC Barcelona, without much success, going on to represent three other teams until his retirement, including one abroad. When fit, he played an important part in Villarreal's La Liga consolidation.

Roger's career was significantly hampered by injuries, and he retired from football at the age of 30, amassing Spanish top division totals of 247 games and 28 goals.

Born in Sabadell, Barcelona, Catalonia, Roger was a product of local FC Barcelona's youth ranks. He made his debuts for the first team in the 1994–95 season, going on to appear in 33 games in the following campaign while scoring his first goal in a 1–1 away draw against Real Madrid, on 30 September 1995.

After two seasons where he appeared sparingly in back-to-back La Liga conquests, Roger moved to neighbouring RCD Espanyol also in the top division, where he was a starter for much of his stay. In his last year, he netted a career-best nine goals (third-best in the squad) while the club barely avoided relegation.

Roger then spent three seasons with Villarreal CF, playing only one match in his second year due to a serious injury. During a 12-month period (2002–03, one with each club), he scored three goals while still in his own half of the field.

In 2006 Roger signed with Eredivisie giants AFC Ajax, joining former Barca teammate Gabri, but retired after just one season due to persistent injuries. At the Amsterdam outfit he became the last player to wear number 14, as it was subsequently retired in honor of club legend Johan Cruyff, his coach at Barcelona.

Roger's brothers, Oscar and Genis, were also footballers. All youth products of Barcelona, they had however different fates as professionals (especially the latter).