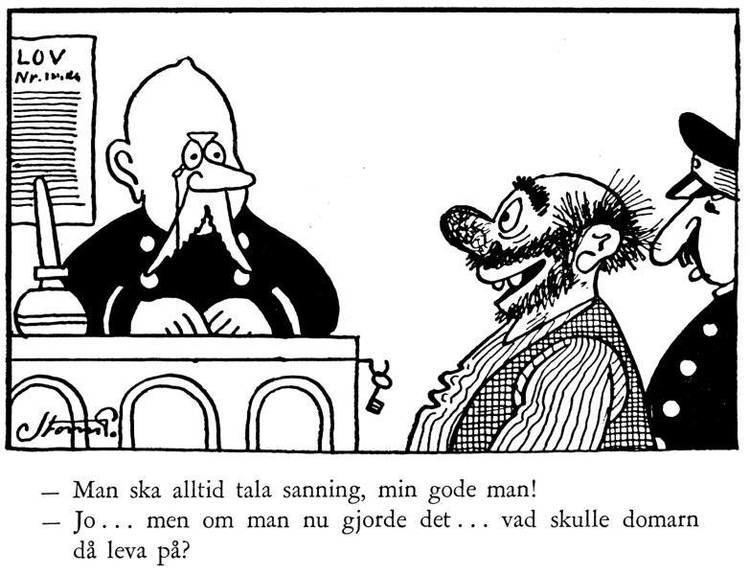 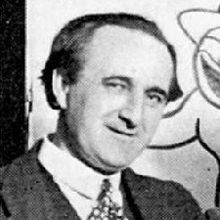 He was the son of a butcher and grew up in Copenhagen in a lower middle class/worker's milieu whose jargon is felt in much of his writings. After interrupted studies at the Academy of Art, he worked as a free-lance painter, illustrator and cabaret entertainer. Already during World War I he was a well-known artist, and from about 1920 onward he was almost a national "institution" as a humorist, partly because of his versatile interests. He was for many years connected to the Copenhagen newspaper "Berlingske Tidende" as a comic writer and cartoonist. 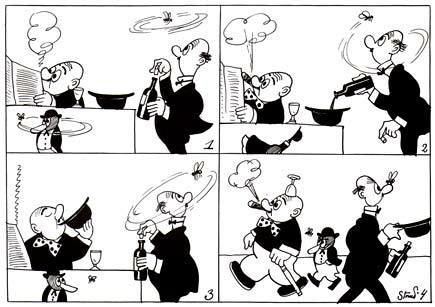 As a humorist, Storm P. is related to British and American humour, with a strong touch of craziness and absurdity. However, he is less marked by total nonsense than, for instance, Lewis Carroll. Often his starting point is a plain Copenhagen jargon, combined with a Danish down-to-earth homespun philosophy and all kinds of cosy fun and comedy; the "little" man's unimpressed comments on a crazy world. 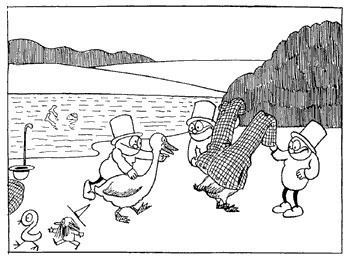 Though normally loved by most of his countrymen, Storm P. has also been criticised for being too toothless, cosy and petit bourgeois. In spite of his social background and interest of poor milieus, he very seldom shows deeper social criticism or revolutionary opinions; the dramatic age in which he lived left rather small stamps on his work. On the other hand he was no staunch giggler; many of his paintings deal with death, sorrow and macabre themes. Though not a revolutionary, he has indeed painted the victims of social injustice and misery, often with a strong touch of compassion. Melancholy and fear are not unknown to him, but his official appearance was an optimistic one.

Petersen left about 60,000 drawings and 100 paintings of varied quality. His drawings are very often illustrated jokes, or series of a theme besides artist sketches. Among his favourite themes are the vagabonds – who are portrayed as grotesquely dressed-up petty philosophers – and the circus milieu that he regarded with much warmth.

He is perhaps best known for his Storm P machines, comic drawings of machines that perform very simple tasks through an unnecessarily complex and usually humorous series of actions. Other cartoonists who are known for similar machine drawings are Rube Goldberg and Heath Robinson. Besides that, he illustrated many books, often written by congenial authors – Mark Twain, Jerome K. Jerome and G. K. Chesterton, among others.

As a painter he is clearly influenced by names like Edvard Munch and Toulouse-Lautrec, but often with an independent naivist touch. Later on, Paul Klee and Wassily Kandinsky seem to have been an inspiration in spite of his often outspoken ridiculing of modern art. Among his many themes are exterieurs from Paris, from prostitution milieus and nature scenes. La Morgue (1906) and Kultur (1908, "Culture") are two of his most well known paintings.

As an author he wrote many short stories and tales, often parodies on detective stories or melodramas, small cozy snap-shots from the Copenhagen lower middle class milieu, absurd and surrealistic tales or, especially, "monologues" put into the mouth of bums, artists, etc. Special kinds of tales were the monologues put into the mouth of his own dog (the Grog, My Dog-tales 1926–1935), in which he let the dog reflect on life, death and daily life, sometimes with a light touch of sadness and pity within the humour.

Storm P is also well known in Denmark as the author of a number of comics (titles in Danish):