Port Said (Egyptian Arabic: Borsa?id , the first syllable has its from French; unurbanized local : ) is a city that lies in north east Egypt extending about 30 kilometres (19 mi) along the coast of the Mediterranean Sea, north of the Suez Canal, with an approximate population of 603,787 (2010). The city was established in 1859 during the building of the Suez Canal.

Port Said has been ranked the second among the Egyptian cities according to the Human Development Index in 2009 and 2010, the economic base of the city is fishing and industries, like chemicals, processed food, and cigarettes. Port Said is also an important harbour for exports of Egyptian products like cotton and rice, but also a fueling station for ships that pass through the Suez Canal. It thrives on being a duty-free port, as well as a tourist resort especially during summer. It is home to the Lighthouse of Port Said (the first building in the world built from reinforced concrete).

There are numerous old houses with grand balconies on all floors, giving the city a distinctive look. Port Saids twin city is Port Fuad, which lies on the eastern bank of the canal. The two cities coexist, to the extent that there is hardly any town centre in Port Fuad. The cities are connected by free ferries running all through the day, and together they form a metropolitan area with over a million residents that extends both on the African and the Asian sides of the Suez Canal. The only other metropolitan area in the world that also spans two continents is Istanbul.

Port Said acted as a global city since its establishment and flourished particularly during the nineteenth and the first half of the twentieth century when it was inhabited by various nationalities and religions. Most of them were from Mediterranean countries, and they coexisted in tolerance, forming a cosmopolitan community. Referring to this fact Rudyard Kipling once said "If you truly wish to find someone you have known and who travels, there are two points on the globe you have but to sit and wait, sooner or later your man will come there: the docks of London and Port Said". 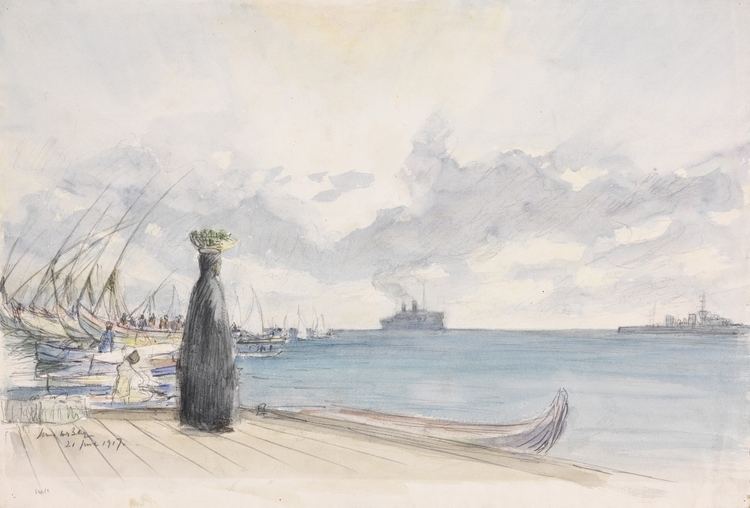 Port Said was founded by Said of Egypt on Easter Monday, April 25, 1859, when Ferdinand de Lesseps gave the first symbolic swing of the pickaxe to signal the beginning of construction. The first problem encountered was the difficulty for ships to drop anchor nearby. Luckily, a single rocky outcrop flush with the shoreline was discovered a few hundred meters away. Equipped with a wooden wharf, it served as a mooring berth for the boats. Soon after, a wooden jetty was built, connecting the departure islet, as it quickly became known, to the beach. This rock could be considered the heart of the developing city, and it was on this highly symbolic site, forty years later, that a monument to de Lesseps was erected. 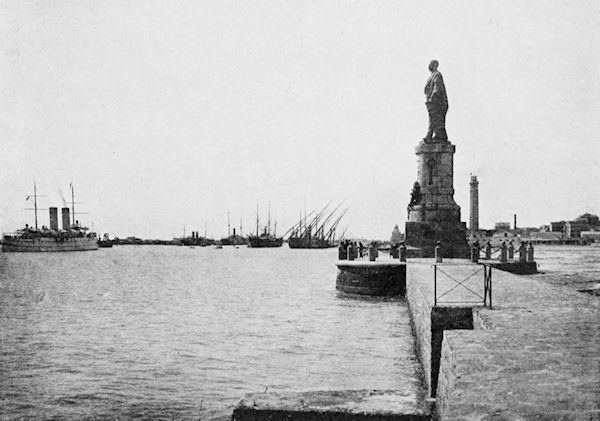 There were no local resources here. Everything Port Said needed had to be imported: wood, stone, supplies, machinery, equipment, housing, food and even water. Giant water storage containers were erected to supply fresh water until the Sweet Water Canal could be completed. One of the most pressing problems was the lack of stone. Early buildings were often imported in kit form and made great use of wood. A newly developed technique was used to construct the jetties called conglomerate concrete or "Beton Coignet", which was named after its inventor Francois Coignet. Artificial blocks of concrete were sunk into the sea to be the foundations of the jetties. Still more innovative was the use of the same concrete for the lighthouse of Port Said, the only original building still standing in Port Said. In 1859 the first 150 laborers camped in tents around a wooden shed. A year later, the number of inhabitants had risen to 2000 — with the European contingent housed in wooden bungalows imported from northern Europe. By 1869, when the canal opened, the permanent population had reached 10,000. The European district, clustered around the waterfront, was separated from the Arab district, Gemalia, 400 meters (1,300 ft) to the west, by a wide strip of sandy beach where a tongue of Lake Manzala reached towards the sea. This inlet soon dried out and was replaced by buildings, over time there was no division between the European and Arab quarters.

At the start of the twentieth century, two things happened to change Port Said: in 1902, Egyptian cotton from Mataria started to be exported via Port Said; and in 1904 a standard gauge railway opened to Cairo. The result was to attract a large commercial community and to raise its social status. In particular a sizable Greek community grew up. Following the end of the World War I, the directors of the Suez Canal Company decided to create a new city on the Asian bank, building 300 houses for its labourers and functionaries. Port Fouad was designed by the Ecole des Beaux-Arts in Paris. The houses follow the French model. The new city was founded in December 1926.

Since its foundation people of all nationalities and religions had been moving to the city and each community brought in its own customs, cuisine, religion and architecture. By the late 1920s the population numbered over 100,000 people. In the 1930s for example there were elegant public buildings designed by Italian architects. The old Arab Quarter was swallowed up into the thriving city. Port Said by now was a thriving, bustling international port with a multi-national population: Jewish merchants, Egyptian shopkeepers, Greek photographers, Italian architects, Swiss hoteliers, Maltese administrators, Scottish engineers, French bankers and diplomats from all around the world. All lived and worked alongside the large local Egyptian community. And always passing through were international travelers to and from Africa, India and the Far East. Intermarriage between French, Italian and Maltese was particularly common, resulting in a local Latin and Catholic community like those of Alexandria and Cairo. French was the common language of the European and non-Arab population, and often the first language of children born to parents from different communities. Italian was also widely spoken and was the mother tongue of part of the Maltese community, since the ancestors of the latter had come to Egypt before the Anglicization of Malta in the 1920s. Multilingualism was a characteristic of the foreign population of Port Said, with most people continuing to speak community languages as well as the common French.

Since its establishment Port Said played a significant role in Egyptian history. The British entered Egypt through the city in 1882, starting their occupation of Egypt. In 1936 a treaty was signed between the United Kingdom and the Kingdom of Egypt called the Anglo-Egyptian Treaty of 1936. It stipulated the British pledge to withdraw all their troops from Egypt, except those necessary to protect the Suez Canal and its surroundings. Following World War II, Egypt denounced the Treaty of 1936, leading to skirmishes with British troops guarding the Canal in 1951.

The Egyptian Revolution of 1952 occurred. Then in 1956, President Gamal Abdel Nasser nationalised the Suez Canal Company. The nationalisation escalated tension with Britain and France, who colluded with Israel to invade Egypt, the invasion known in Egypt as the tripartite aggression or the Suez Crisis. The main battles occurred in Port Said, which played a historic role in the Suez Crisis. The withdrawal of the last soldier of foreign troops was on the 23rd of December 1956. Since then, this day was chosen as Port Saids national day. It is widely celebrated annually in Port Said. The French-speaking European community had begun to emigrate to Europe, Australia, South Africa and elsewhere in 1946 and most of the remainder left Egypt in the wake of the Suez Crisis, paralleling the contemporary exodus of French-speaking Europeans from Tunisia.

After the 1967 Arab-Israeli war, also called the Six-Day War, the Suez Canal was closed by an Egyptian blockade until 5 June 1975, and the residents of Port Said were evacuated by the Egyptian government to prepare for the Yom Kippur War (1973). The city was re-inhabited after the war and the reopening of the Canal. In 1976, Port Said was declared a duty-free port, attracting people from all over Egypt. Now the population of the city is 603,787. 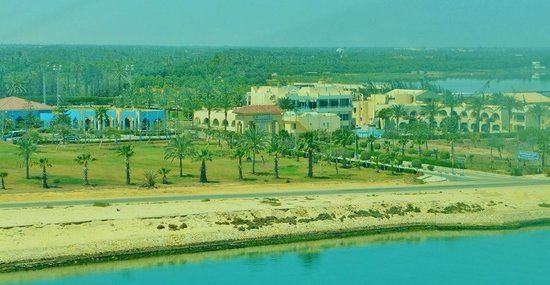 Port Said has a hot desert climate (BWh) according to Koppen climate classification, but blowing winds from the Mediterranean Sea greatly moderates the temperatures, typical to the northern coast of Egypt, making its summers moderately hot and humid while its winters mild and moderately wet when sleet and hail are also common, yet less common than in Alexandria because Port Said is drier. January and February are the coolest months while the hottest are July and August. 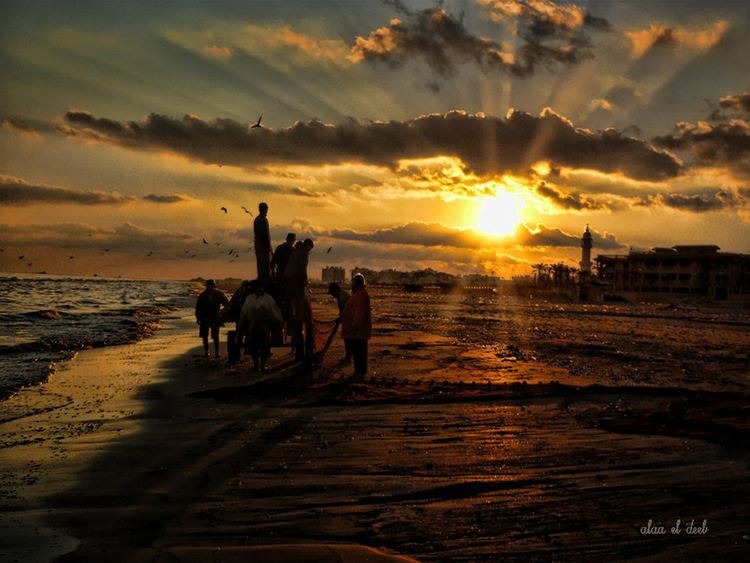 Port Said, Kosseir, Ras El Bar, Baltim, Damietta and Alexandria have the least temperature variation in Egypt, additionally, Mersa Matruh and Port Said have the coolest summer days of any other cities or resorts, although not significantly cooler than other northern coastal places. 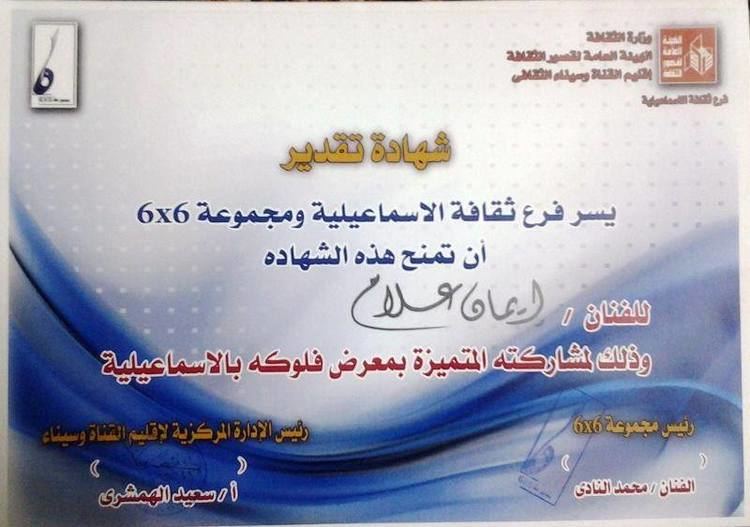 Misr Public Library in Port Said was inaugurated in 2004 near the beach to serve the people of the city. The total area of the library about 12,500 meters (41,000 ft) and it is surrounded by a garden and a cafeteria to serve the visitors. The library is divided into halls for children, adults, training center, a distinct hall for seminars and a hall for audio-visual materials. The library at the time of its inauguration reached about 14,000 books and was supplied by encyclopedias and modern references.