Pokemon the Movie: Kyurem vs. the Sword of Justice, originally released in Japan as Pocket Monsters Best Wishes! The Movie: Kyurem vs. the Sacred Swordsman: Keldeo (, Gekijoban Poketto Monsuta Besuto Uisshu Kyuremu tai Seikenshi Kerudio) is a 2012 Japanese anime film and the 15th Pokemon anime movie released. The movie was released on July 14, 2012 in Japan. The movies features Kyurem, the Boundary Pokemon, as revealed during a preview shown at the end of the last movie Pokemon the Movie: Black—Victini and Reshiram and White—Victini and Zekrom, as well as Cobalion, Terrakion, and Virizion, the titular "Sacred Swordsmen", before the introduction of the new Pokemon Keldeo. The movie also celebrates the 90th anniversary of the Japanese manga publisher Shogakukan, which published many Pokemon-related works. The film was first broadcast in English on Cartoon Network in the United States on December 8, 2012. The movie was released on DVD in the U.S. on April 2, 2013 by Viz Media. Universal released the movie on DVD in the UK on September 30, 2013. 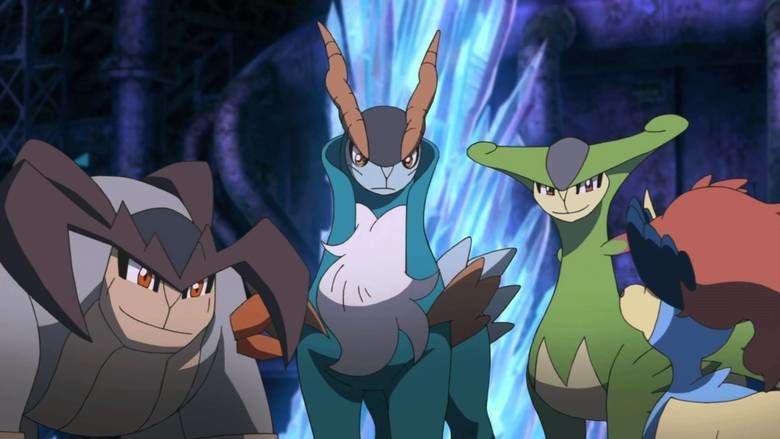 The movie features Ash and his two friends Iris and Cilan, as they help a Keldeo battle against a powerful Dragon-type Pokémon named Kyurem as his test to become a Sacred Swordsman.

Kyurem vs. the Sacred Swordsmen: Keldeo was first revealed during the teaser trailer after the end of the previous movies Victini and the Black Hero: Zekrom and Victini and the White Hero: Reshiram (later released internationally as Pokemon the Movie: Black—Victini and Reshiram and White—Victini and Zekrom.) The Japanese show Oha Suta showed a 15 minute trailer of the movie while revealing its tentative title. The January issue of CoroCoro Comic also revealed the release date of the film. In the March issue of CoroCoro Comic, the new Pokemon Keldeo, the Colt Pokemon, was introduced and its name was appended to the title of the film. 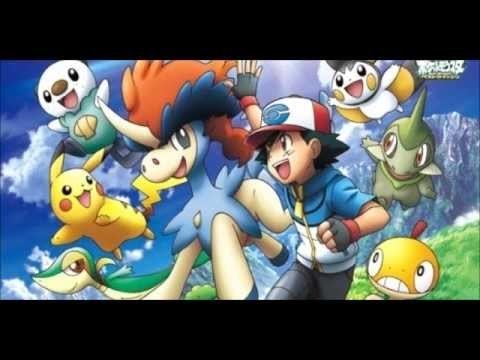 In the film poster released on February 26, 2012, Kyurem is also shown having two alternate forms. In an episode of Pokemon Smash! shown on the same day, Junichi Masuda revealed these forms alongside the announcement of the Pokemon Black 2 and White 2 games. He later posted to his Twitter account that the Pokemon were called Black Kyurem (, Burakku Kyuremu) and White Kyurem (, Howaito Kyuremu). The July 2012 issue of CoroCoro Comic also reveals Keldeos new form, called the Resolution form, which will play an important part in the movie. 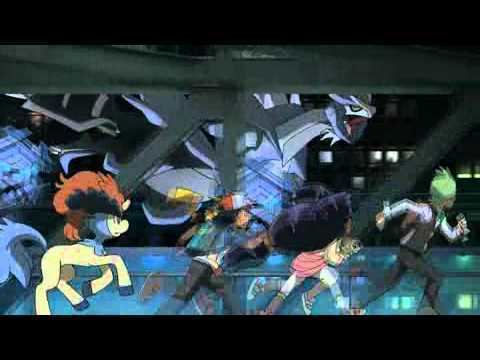 The film poster also reveals that the film will be accompanied by a short titled Meloettas Sparkling Recital (, Meroetta no Kirakira Resaitaru, internationally as Meloettas Moonlight Serenade), introducing another new Pokemon: Meloetta in both its Aria and Pirouette Forme.

The April issue of CoroCoro Comic reveals both Keldeo and Meloetta as Pokemon to be distributed in theaters. Players who purchase a pre-sale ticket of the movie will able to receive Keldeo in Pokemon Black, White, Black 2, or White 2 between June 23 to August 21, but Meloettas release has not yet been announced. 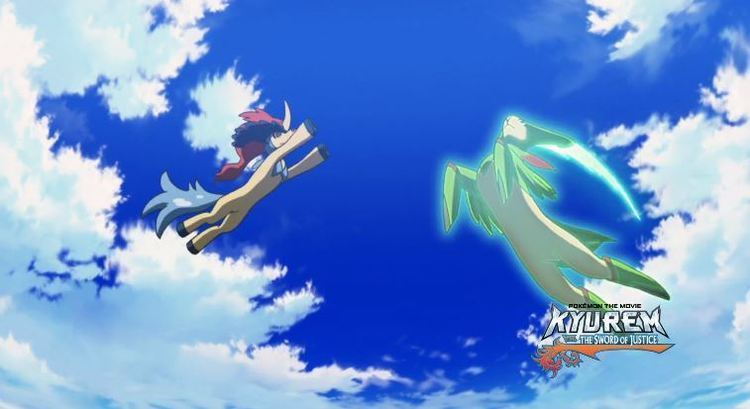 The film follows Keldeo, who wishes to become a member of the Swords of Justice, but before it can Keldeo must learn the move Secret Sword so that it will become part of the group.

Later in that night, while the Swords of Justice are sleeping, Keldeo sneaks out to go to Full Court where it fights against Kyurem. Pretending to be the member of the Swords of Justice, the two challenge each other to a battle. During the battle, Kyurem breaks Keldeos horn, causing Keldeo to become deathly afraid of it. Virizion, Terrakion, and Cobalion, who had followed Keldeo, try to stop the fight. In a fury, Kyurem transforms into White Kyurem and freezes the Swords of Justice. Much to its horror, Keldeo runs away in panic. Enraged, Kyurem starts to chase after the Colt Pokemon, announcing that their battle is not yet over.

At the train station, Ash, Iris, Cilan, Pikachu, Axew, Oshawott, Snivy, Scraggy, Emolga, and Pansage are on board the train that will take them into the city. They stop at Windy Station and purchase some Darumaka boxed lunches before they go back to the train. An injured Keldeo ends up on the train and Ash and his friends find it. Keldeo tells them that Kyurem is following him and it is trying to escape. However, Keldeo collapses from its injuries. Kyurem arrives with its minions, several Cryogonal, still wanting to continue the fight. Iris remembers about Kyurem, having been told about it from the elder in her hometown. However, Kyurem is forced to withdraw when the train enters a tunnel.

The group takes Keldeo to Roshan Citys Pokemon Center to heal it, where Nurse Joy explains about the legend of Kyurem and the Swords of Justice, the latter being heroes who protect the Pokemon from danger. Outside the Pokemon Center, Ash and his friends introduce them selves along with Pikachu and Axew. Keldeo soon spills the beans about its battle with Kyurem. Later that night, Kyurem returns again for the battle, while the group decides to get to Full Court so they so free the Swords of Justice. Iris uses a zeppelin while Cilan uses an abandoned train (powered by his Stunfisk, tricking Kyurem into thinking that Keldeo is with each of them.

During the battle, Kyurem almost kills Ash and his friends, but Keldeo gets in the way of the blast to save them. This defeats Keldeo, and Kyurem takes its win after transforming into Black Kyurem. Despite being defeated by Kyurem, the Swords of Justice and Ash and his friends praise Keldeo for finally learning the true power of the sword, which officially makes it the fourth member of the team. The group retreat when Full Court collapses while Kyurem transforms into White Kyurem to freeze everything. Outside, Ash and his friends congratulate Keldeo. Soon, Cobalion thinks that its time to say the Swords of Justice Oath and it would like Ash and his friends to be their witnesses. Ash and friends agree. Then Keldeo switches from ordinary forme to resolute form and they all say the oath together. Greater than 1 is 2. Greater than 2 is 3. Greater than 3 is 4. When the strength of friends is combined into one, then true power and courage are created!!!

As in the previous Pokemon films and its anime series, the music is composed by Shinji Miyazaki.

The movies theme song is titled "Memories" (, Memorizu) which is performed by the Bengali-Russian-Japanese model-turned-singer Rola. The films director Kunihiko Yuyama thinks the song will work perfectly for the film itself after he first heard it. Rola also voiced a character in the film named Marin. The single itself was released on July 11, 2012. And the English ending for this movie is "Its All Inside of You" written by John Loeffler and David Wolfert (who also wrote "Rival Destines" which is performed by Kathryn Raio and Alex Nackman) and is performed by Jesse Turner.

Jessie (Musashi), James (Kojiro), and Meowth (Nyarth) make several cameo appearances in this feature but without any spoken dialogue.