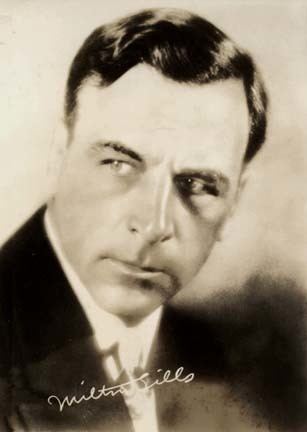 Sills was born in Chicago, Illinois into a wealthy family. He was the son of William Henry Sills, a successful mineral dealer, and Josephine Antoinette Troost Sills, an heiress from a prosperous banking family. Upon completing high school, Sills was offered a one-year scholarship to the University of Chicago, where he studied psychology and philosophy. After graduating, he was offered a position at the university as a researcher and within several years worked his way up to become a professor at the school.

In 1905, stage actor Donald Robertson visited the school to lecture on author and playwright Henrik Ibsen and suggested to Sills that he try his hand at acting. On a whim, Sills agreed and left his prestigious teaching career to embark on a stint in acting. Sills joined Robertson's stock theater company and began touring the country.

In 1908, while Sills was performing in New York City, he garnered critical praise from such notable Broadway producers as David Belasco and Charles Frohman. That same year he made his Broadway debut in This Woman and This Man, which was an immediate success with both the theatergoing public and critics. From 1908 to 1914, Sills appeared in about a dozen Broadway shows, becoming a crowd favorite and attaining a great deal of fame.

In 1910, Sills married English stage actress Gladys Edith Wynne, a niece of actress Edith Wynne Matthison. The union produced one child, Dorothy Sills, and the couple divorced in 1925. In 1926, Sills remarried, this time to silent film actress Doris Kenyon. The couple had a son, Kenyon Clarence Sills, born in 1927.

In 1914, Sills decided to conquer the new medium of motion pictures. He made his film debut the same year in the big-budget drama The Pit for the World Film Company and was signed to a contract with film producer William A. Brady. The film was enormously successful, and Sills made three more films for the company, including another huge box-office draw The Deep Purple opposite silent screen star Clara Kimball Young. By the late 1910s, Sills had reached leading man status and parted ways with World Film, taking the then unusual path of freelancing as an actor.

By the early 1920s, Sills was enjoying a highly successful acting career and working for such prominent film studios as Metro Pictures, Famous Players-Lasky, and Pathe Exchange. He was often paired with the most popular leading ladies of the era, including: Geraldine Farrar, Gloria Swanson and Viola Dana. His greatest public and commercial successes came with the now lost Flaming Youth (1923) opposite Colleen Moore, and the enormous box-office hit The Sea Hawk (1924).

On May 11, 1927, Sills had the distinction of being among the original 36 individuals in the film industry to found the Academy of Motion Picture Arts and Sciences (AMPAS), a professional honorary organization dedicated to the advancement of the arts and sciences of motion pictures. Fellow performers included: Mary Pickford, Richard Barthelmess, Jack Holt, Conrad Nagel, Douglas Fairbanks, and Harold Lloyd.

Sills' last work was not The Sea Wolf (1930) but a book published posthumously in 1932: Values: A Philosophy of Human Needs - Six Dialogues on Subjects from Reality to Immortality - co-edited by Ernest Holmes. Milton Sills was an unusual blend of actor and academic.

Sills made two sound pictures, showing that he had an excellent voice. Many may have forgotten that Sills had extensive stage training before embarking on his career before the cameras. Sills died unexpectedly of a heart attack in 1930 while playing tennis with his wife at his Brentwood Estate in Los Angeles, California home at the age of 48. He was interred at the Rosehill Cemetery and Mausoleum in Chicago, Illinois. In December 1930, Photoplay published a poem found among his personal effects. It was untitled and written by him to his wife, Doris Kenyon: "Death cannot end all things, if love denied / Must find fulfillment, as indeed it must / Though you and I descend into the dust / And in the earth commingle side by side / Yet shall our frustrate ghosts triumph and ride / To some far heaven, where our love and trust / Anoint the bridegroom and the bride / Then hushed and dreamlike shall our footsteps wind / Through fields of deathless asphodel, where blows / No sharp wind of despair, and we shall find / Each other's hands again; and all our woes / Shall be forgot; our spirits sky-enshrined / While heart with crumbled heart climbs in the rose."

For his contribution to the motion picture industry, Milton Sills was awarded a star on the legendary Hollywood Walk of Fame at 6263 Hollywood Blvd. in Hollywood, California.