Milan ( Italian: , Lombard: Milan ), Latin: , is the second-most populous city in Italy and the capital of Lombardy. The city proper has a population of about 1.3 million, while its urban area is the 5th largest in the EU with an estimated population of about 5,264,000. The massive suburban sprawl that followed the post-war boom of the 1950s–60s and the growth of a vast commuter belt, suggest that socio-economic linkages have expanded well beyond the boundaries of its administrative limits and its agglomeration, creating a polycentric metropolitan area of between 7 and 10 million people, stretching over the former provinces of Milan, Bergamo, Como, Lecco, Lodi, Monza and Brianza, Pavia, Varese, Novara. The Milan metropolitan region is part of the so-called Blue Banana, the area of Europe with the highest population and industrial density, and one of the Four Motors for Europe.

Milan was founded by the Insubres, a Celtic people. The city was later conquered by the Romans as Mediolanum, eventually becoming the capital of the Western Roman Empire. During the Middle Ages, Milan flourished as a commercial and banking center. In the course of the following centuries, it had been alternatively dominated by France, Habsburg Spain, and Austria, until 1859 when the city joined the rising Kingdom of Italy. During the early 1900s, Milan led the industrialization process of the young nation, being at the very center of the economic, social, and political debate. Badly affected by World War II, and suffering a harsh Nazi occupation, the city became the main centre of the Italian Resistance. In post-war years, the city enjoyed a prolonged economic boom, attracting large flows of workers from Southern Italy. During the last decades, Milan has seen a dramatic rise in the number of international immigrants, and in 2011 more than one sixth of its population is foreign born.

Milan is the main industrial, commercial, and financial centre of Italy and a leading global city. Its business district hosts the Borsa Italiana (Italys main stock exchange) and the headquarters of the largest national banks and companies. The city is a major world fashion and design capital. Milans museums, theatres and landmarks (including the Milan Cathedral, the fifth largest cathedral in the world, and Santa Maria delle Grazie, decorated with Leonardo da Vinci paintings, a UNESCO World Heritage Site) attracts over 6 million annual visitors. It hosts numerous cultural institutions and universities, with 185,000 enrolled students in 2011, i.e. 11 percent of the national total. The city is also well known for several international events and fairs, including Milan Fashion Week and the Milan Furniture Fair, the largest of its kind in the world, and will host the 2015 Universal Exposition, and Design World Expo in 2016. Milan is home to two of the worlds major football teams, A.C. Milan and F.C. Internazionale Milano. 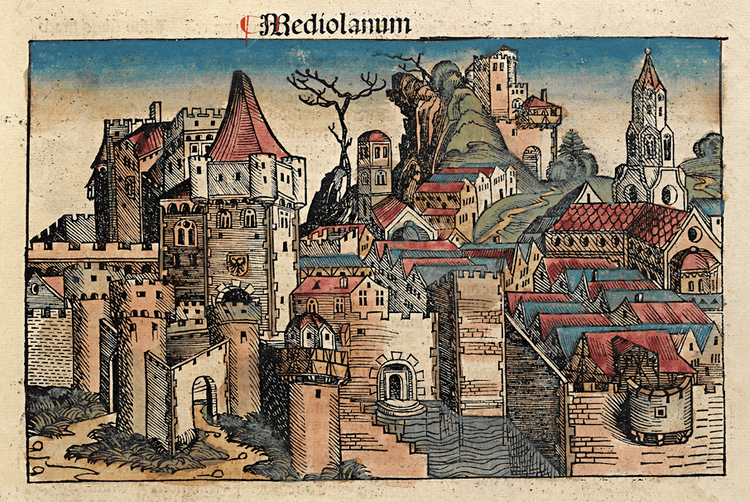 The etymology of Milan is very uncertain. While the modern name of the city is clearly derived from its Latin name Mediolanum, apparently from the Latin words medio, meaning "in the middle", and planus, "plain", it has been suggested that its original roots could lie more deeply in the citys Celtic heritage. Indeed, the name "Mediolanum" is borne by about sixty Gallo-Roman sites all over France, such as Saintes (Mediolanum Santonum) and Evreux (Mediolanum Aulercorum), as every Celtic community had its sacred assembly place of law and justice, usually placed at the midpoint of their territory. In addition, some scholars have suggested that the second element of the Latin name, lanum, could be identified with the Celtic root lan, signifying an enclosure or demarcated territory (source of the Welsh word llan, meaning a sanctuary or church) in which Celtic communities used to build shrines. Hence, Mediolanum could signify the central town or sanctuary of a particular Celtic tribe. 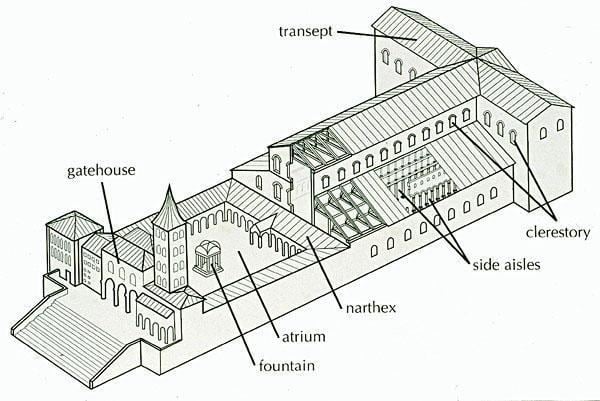 Another theory links the origin of the name to the boar sow (the Scrofa semilanuta) an ancient emblem of the city, fancifully accounted for in Andrea Alciatos Emblemata (1584), beneath a woodcut of the first raising of the city walls, where a boar is seen lifted from the excavation, and the etymology of Mediolanum given as "half-wool", explained in Latin and in French. The foundation of Milan is credited to two Celtic peoples, the Bituriges and the Aedui, having as their emblems a ram and a boar; therefore "The citys symbol is a wool-bearing boar, an animal of double form, here with sharp bristles, there with sleek wool." Alciato credits Ambrose for his account. 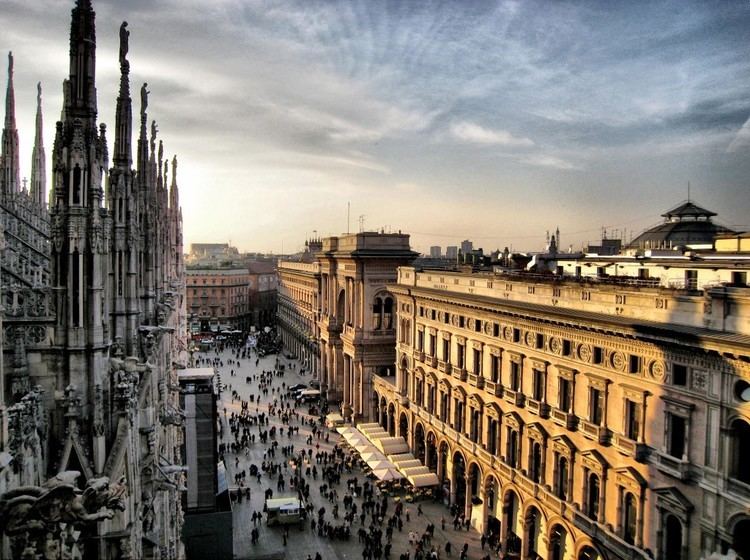 Milan is located in the north-western section of the Po Valley, approximately half-way between the river Po to the south and the first reliefs of the Alps with the great lakes (Lake Como, Lake Maggiore, Lake Lugano) to the north, the Ticino river to the west and the Adda to the east. The municipal territory is entirely flat, the highest point being at 122 m (400.26 ft) above sea level. The administrative commune covers an area of about 181 square kilometres (70 sq mi), with a population, in 2013, of 1,324,169 and a population density of 7,315 inhabitants per square kilometre (18,950/sq mi). A larger urban area, comprising parts of the provinces of Milan, Monza e Brianza, Como, Lecco and Varese is 1,891 square kilometres (730 sq mi) wide and has a population of 5,264,000 with a density of 2,783 inhabitants per square kilometre (7,210/sq mi). 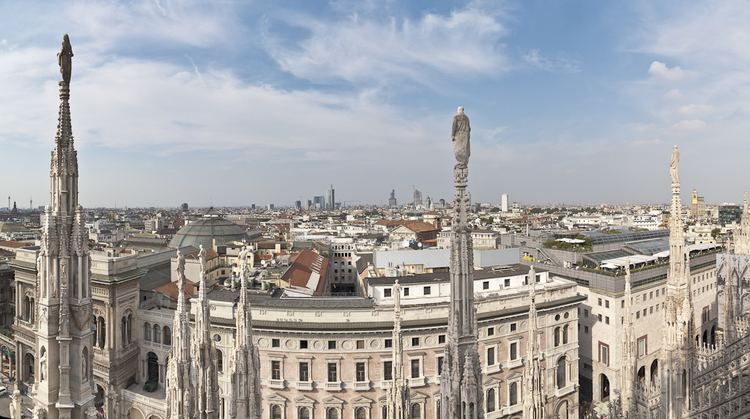 Modern Milan has a central area focused on residential and tertiary activities, with a financial district that hosts the stock exchange and the headquarters of banks and insurance companies, shopping centres and educational institutions. In the concentric layout of the city centre is still evident the influence of Navigli, an ancient system of navigable and interconnected canals, now mostly covered. Around the city proper, and beyond its railway and motorway rings, lies a vast urbanized valley that expands mainly to the north, engulfing many communes in a continuous urban landscape. The contiguous built-up area trespass by far the city limits, forming a vast urban agglomeration that stretches northeast and northwest to reach Varese, Como, Lecco and Bergamo. 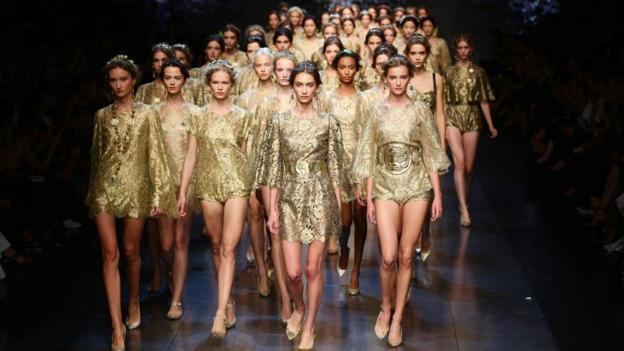 Milan is a major national and international centre of the performing arts, most notably opera. Milan hosts La Scala operahouse, considered one of the most prestigious operahouses in the world, and throughout history has hosted the premieres of numerous operas, such as Nabucco by Giuseppe Verdi in 1842, La Gioconda by Amilcare Ponchielli, Madama Butterfly by Giacomo Puccini in 1904, Turandot by Giacomo Puccini in 1926, and more recently Teneke, by Fabio Vacchi in 2007. Other major theatres in Milan include the Teatro degli Arcimboldi, Teatro Dal Verme, Teatro Lirico and formerly the Teatro Regio Ducal. The city also has a renowned symphony orchestra and musical conservatory, and has been, throughout history, a major centre for musical composition: numerous famous composers and musicians such as Gioseppe Caimo, Simon Boyleau, Hoste da Reggio, Verdi, Giulio Gatti-Casazza, Paolo Cherici and Alice Edun are or were from, or call or called Milan their home. The city is also the birthplace of many modern ensembles and bands, including Camaleonti, Camerata Mediolanense, Dynamis Ensemble, Elio e le Storie Tese, Krisma, Premiata Forneria Marconi, Quartetto Cetra, Stormy Six and Le Vibrazioni.

Milan is home to many cultural institutions, museums and art galleries, that account for about a tenth of the national total of visitors and recepits. The Pinacoteca di Brera is one of Milans most important art galleries. It contains one of the foremost collections of Italian painting, including masterpieces such as the Brera Madonna by Piero della Francesca. The Castello Sforzesco hosts numerous art collections and exhibitions, especially statues, ancient arms and furnitures, as well as the Pinacoteca del Castello Sforzesco, with an art collection including Michelangelos last sculpture, the Rondanini Pieta, Andrea Mantegnas Trivulzio Madonna and Leonardo da Vincis Codex Trivulzianus manuscript. The Castello complex also includes The Museum of Ancient Art, The Furniture Museum, The Museum of Musical Instruments and the Applied Arts Collection, The Egyptian and Prehistoric sections of the Archaeological Museum and the Achille Bertarelli Print Collection.

Milans figurative art flourished in the Middle-Ages, and with the Visconti family being major patrons of the arts, the city became an important centre of Gothic art and architecture (Milan Cathedral being the citys most formidable work of Gothic architecture). Leonardo worked in Milan from 1482 until 1499. He was commissioned to paint the Virgin of the Rocks for the Confraternity of the Immaculate Conception and The Last Supper for the monastery of Santa Maria delle Grazie.

The city was affected by the Baroque in the 17th and 18th centuries, and hosted numerous formidable artists, architects and painters of that period, such as Caravaggio and Francesco Hayez, which several important works are hosted in Brera Academy. The Museum of Risorgimento is specialized on the history of Italian unification Its collections include iconic paintings like Baldassare Verazzis Episode from the Five Days and Francesco Hayezs 1840 Portrait of Emperor Ferdinand I of Austria. The Triennale is a design museum and events venue located in Palazzo dellArte, in Sempione Park. It hosts exhibitions and events highlighting contemporary Italian design, urban planning, architecture, music, and media arts, emphasizing the relationship between art and industry.

Milan in the 20th century was the epicenter of the Futurist artistic movement. Filippo Marinetti, the founder of Italian Futurism wrote in his 1909 "Futurist Manifesto" (in Italian, Manifesto Futuristico), that Milan was "grande...tradizionale e futurista" ("grand...traditional and futuristic", in English). Umberto Boccioni was also an important Futurism artist who worked in the city.Today, Milan remains a major international hub of modern and contemporary art, with numerous modern art galleries. The Modern Art Gallery, situated in the Royal Villa, hosts collections of Italian and European painting from the 18th to the early 20th centuries. The Museo del Novecento, situated in the Palazzo dellArengario, is one of the most important art galleries in Italy about 20th-century art; of particular relevance are the sections dedicated to Futurism, Spatialism and Arte povera.

Like most cities in Italy, Milan has developed his own local culinary tradition, which, as it is typical for North Italian cuisines, uses more frequently rice than pasta, butter than vegetable oil and features almost no tomato or fish. Milanese traditional dishes includes cotoletta alla milanese, a breaded veal (pork and turkey can be used) cutlet pan-fried in butter (similar to Viennese "Wienerschnitzel"). Other typical dishes are cassoeula (stewed pork rib chops and sausage with Savoy cabbage), ossobuco (braised veal shank served with a condiment called gremolata), risotto alla milanese (with saffron and beef marrow), busecca (stewed tripe with beans), and brasato (stewed beef or pork with wine and potatoes). Season-related pastries include chiacchiere (flat fritters dusted with sugar) and tortelli (fried spherical cookies) for Carnival, colomba (glazed cake shaped as a dove) for Easter, pane dei morti ("Deads Day bread", cookies aromatized with cinnamon) for All Souls Day and panettone for Christmas. The salame Milano, a salami with a very fine grain, is widespread throughout Italy. Renown Milanese cheeses are gorgonzola (from the namesake village nearby), mascarpone, used in pastry-making, taleggio and quartirolo. 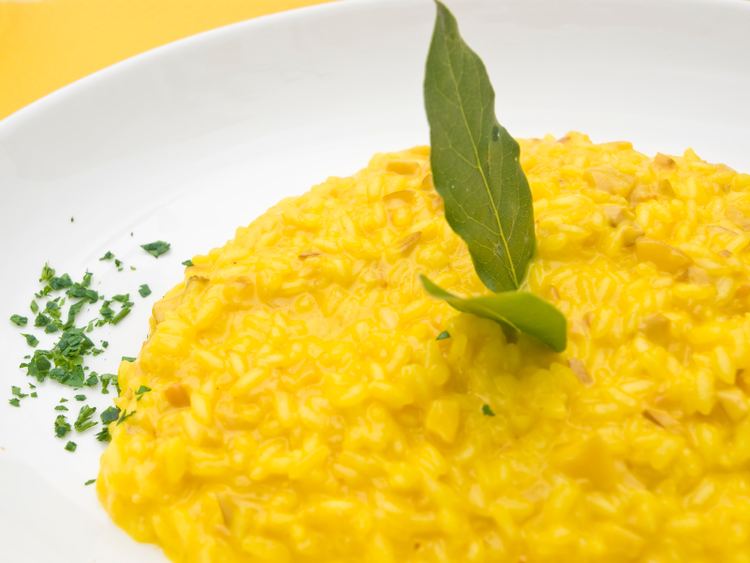 Milan is well known for its world-class restaurants and cafes, characterized by innovative cuisine and design. As of 2014, Milan has 157 Michelin-selected places, including three 2-Michelin-starred restaurants; these include Cracco, Sadler and il Luogo di Aimo e Nadia. Many historical restaurants and bars are found in the historic centre, the Brera and Navigli districts. One of the citys oldest surviving cafes, Caffe Cova, was established in 1817. In total, Milan has 15 cafes, bars and restaurants registered among the Historical Places of Italy, continuously operating since at least 70 years.