Michal Rovner was born in Tel Aviv, Israel. She studied cinema, television, and philosophy at Tel Aviv University and subsequently at the Bezalel Academy of Arts and Design in Jerusalem in 1981, receiving a BFA in photography and art in 1985. In 1978, with artist Arie Hammer, she co-founded the Camera Obscura School of Art in Tel Aviv, the city’s first school for photographers. She moved to New York in 1987.

In her early photography series Outside (1990–91), Rovner photographed a Bedouin encampment in the desert and reprinted it, distorting its size and color. For the Decoy series (1991), she distorted radar and surveillance images to create photographs of indistinct groups of people with blurred features. In One-Person Game Against Nature (1992–93), she again distorted images, this time her own photographs of people floating in the Dead Sea. 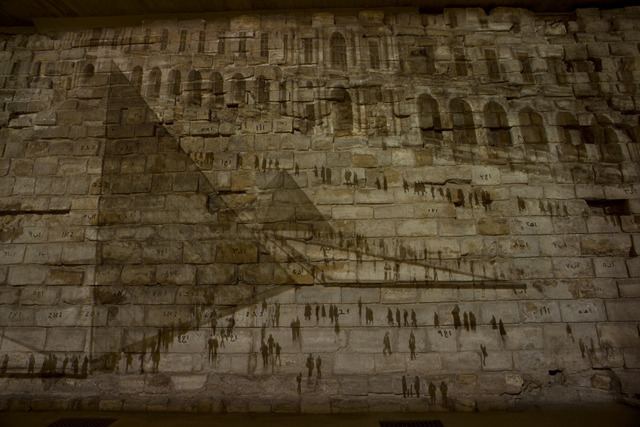 In 1996, Rovner began to use film and video, creating works featuring anonymous crowds of people or animals, as in Monoprints of Birds (1998). While she has eschewed direct political commentary in her work, in 1995–96 she produced installations for the Israel-Lebanon border that were situated on electric fences and guard towers in the line of ongoing exchanges of fire. These were complemented by her video Border (1996–97), in which she futilely attempted to demarcate and cross the border from Israel into Lebanon. 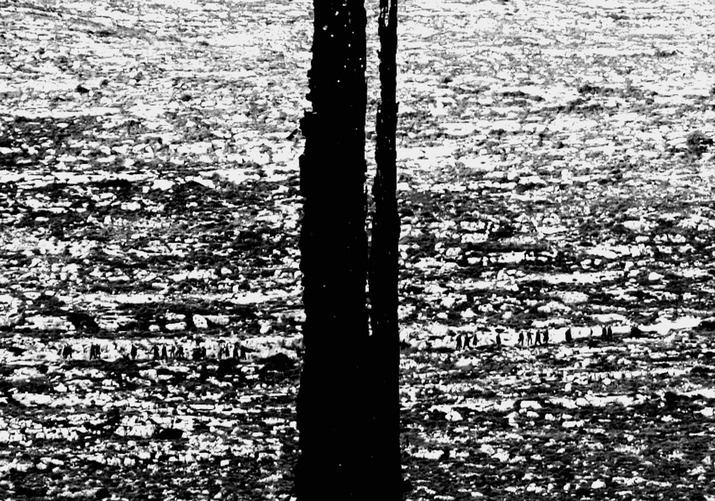 Her video Notes (2001) was a collaboration with the composer Philip Glass; Rovner used footage of a group of people walking on an inclined angle, and Glass composed music inspired by this moving image (their collaboration was documented in the 2003 documentary Looking Glass). Time Left (2002), a multichannel-video installation comprising images of endless rows of indistinct beings, was the centerpiece of her mid-career retrospective at the Whitney Museum of American Art in New York in 2002. For the exhibition In Stone, at PaceWildenstein in New York in 2004, she mixed sculpture and video by projecting minute images of crowds onto tablets of stone, blurring the line between image and text.

In the film Fields of Fire (2005), Rovner’s images of oilfields in the Republic of Kazakhstan reflect the persistent instability of a region at the epicenter of international scrutiny. Living Landscape (2005), a site-specific video wall at Yad Vashem in Jerusalem, projects a montage of pre-WWII footage of dances, music, and daily lives of European Jews.

In the early 1990s, she worked with director Robert Frank on two films, One Hour-C’est Vrai (1990), an experimental film for French television, and Last Supper (1992), which she cowrote.

Rovner represented Israel in the 50th Venice Biennale and turned the Israeli pavilion into one of the most interesting one that year. "....Rovner's media art is like no other. She stands alone in the pure and artful way she bends digital technology to suit her own vision. She makes of these tools fine materials like the smoothest of marble or the supplest of paints..."

Her installation in the Louvre in 2011 was called "Histories". The Louvre chose Rovner for its Summer season outdoor display, next to the famous entrance Pyramid. Rovner's idea was to explore the themes of physical and psychological borders and of identity. In winter 2012 Rovner presented "Topography" show in Pace Gallery, New York, continuing environment and science theme.

Rovner has had numerous solo exhibitions since her first, at Dizengoff Center in Tel Aviv in 1987, including shows at the Prague House of Photography (1992), the Art Institute of Chicago (1993), Stedelijk Museum in Amsterdam (1997), Museo d’Arte Contemporanea in Rome (2003), and Jeu de Paume in Paris (2005). She has also exhibited widely in group exhibitions, such as the Photography Biennial in Ein Harod, Israel (1986), New Photography 10 at the Museum of Modern Art in New York (1994), Photographic Condition at the San Francisco Museum of Modern Art (1995), Whitney Biennial (2000), Biennial Exhibition at the Corcoran Gallery of Art in Washington, D.C. (2000), Venice Biennale (2003), Shanghai Bienniale (2004), the Auckland Triennial (2007), the Heckscher Museum of Art in Huntington (2008).

In 1997, Rovner received the Tel Aviv Museum Award and in 2008 she received an honorary doctorate from the Hebrew University of Jerusalem. She lives and works in New York and Israel, where she has a farm in the Valley of Ayalon, between Tel Aviv and Jerusalem.

"My work is not directly related to the Israeli-Palestinian question. I present situations of conflict, tensions, fractures.. vulnerability. (...) I always begin with reality. I record it and subsequently, little by little, I extract the image of reality, which becomes more fuzzy, losing its own definition, and bringing therefore something else."